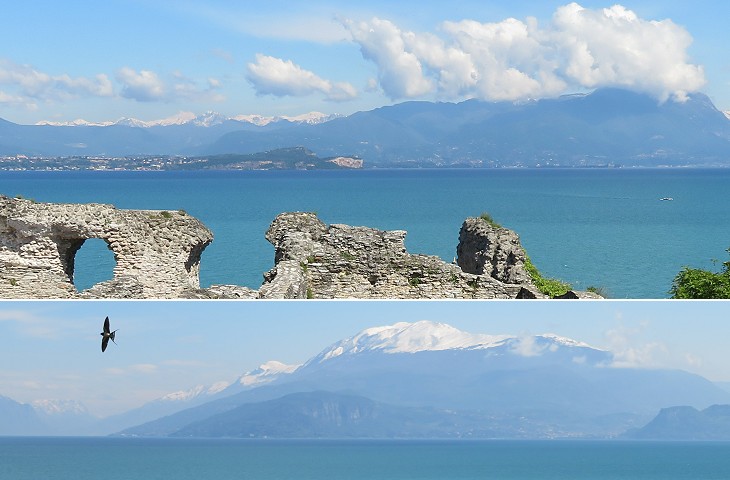 The western (above) and eastern (below, with Mount Baldo - 2,218 m /7,277 ft) shores of Lake Garda seen from "Grotte di Catullo" at the tip of the peninsula of Sirmione

This lake di Garda is thirty five miles from south to north, and some places fourteen broad; when the wind blows from the neighbouring hills, it rages like a sea. (..) Some say that Sirmione, at the south-end of it, was the estate of the poet Catullus.
Thomas Nugent - The Grand Tour - 1749
A door opens from the chamber. (..) Before this I have placed my table, and taken a rough sketch of the prospect. The lake may be seen for its whole length. (..) The shore, which is inclosed on both sides by hill and mountain, shines with a countless number of little hamlets. (..) This lake was formerly called "Benacus", and it was mentioned in a line from Virgil: "Fluctibus et fremiter resonans, Benace, marino" (Thee, Benacus! foaming like a troubled sea). This is the first Latin verse, the subject of which ever stood visibly before me, and now, in the present moment, when the wind is blowing stronger and stronger, and the lake casts loftier billows against the little harbour, it is just as true as it was hundreds of years ago. Much, indeed, has changed, but the wind still roars about the lake. (..) My expedition on the lake ended happily, after the noble aspect of the water, and of the adjacent shore of Brescia had refreshed my very heart. On the western side, where the mountains cease to be perpendicular, and near the lake, the land becomes more flat. (..) No words can express the beauty of this richly inhabited spot.
J. W. Goethe - Italian Journey - September 14, 1786 - translation by Charles Nisbeth 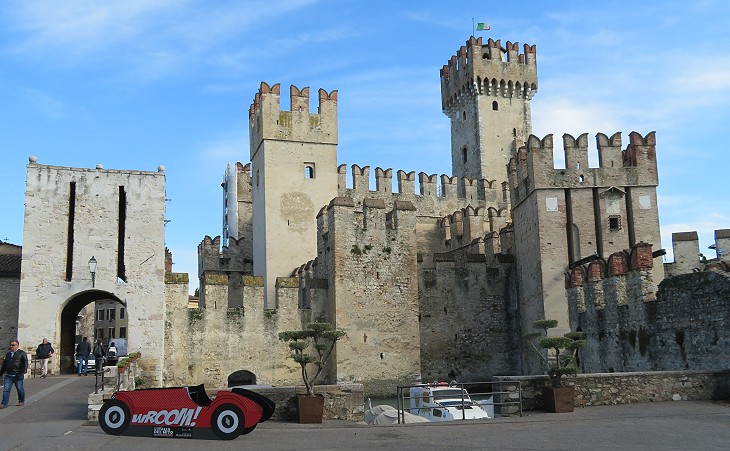 Castello Scaligero, its small harbour and entrance to the town of Sirmione

The road from Verona to Brescia, runs near the lake, and passes the S. extremity of the Promontory of Sirmione. (..) The Scaligerian castle of Sirmione is a picturesque object, with its towers and forked battlements.
John Murray - Handbook for Travellers in Northern Italy - 1852
Desenzano is a village in the low ground at the end of the lake. Those who sleep here will employ their time very well in making an excursion by boat to the promontory of Sermione, the Sirmio of Catullus. (..) Just where the almost-island of Sermione is connected with the main-land, is the fine old Castel Nuovo, built in the 14th century by Alboino della Scala, and a famous subject artistically.
Augustus J. C. Hare - Cities of Northern and Central Italy - 1876 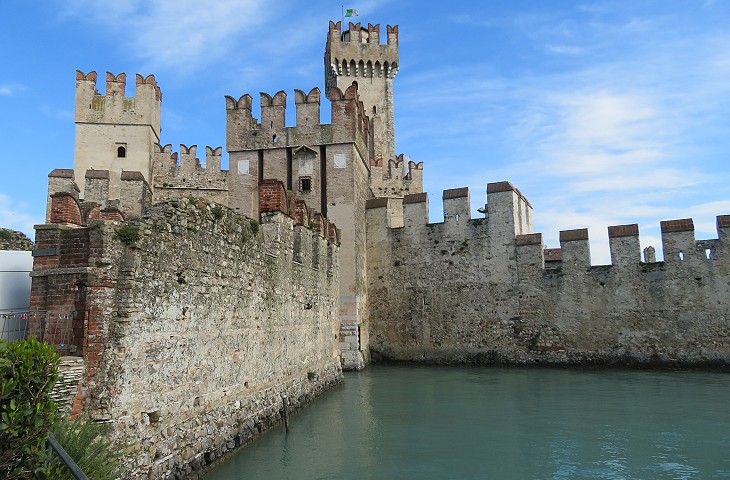 The Scaligeri, the Signori (Lords) of Verona, built this castle, most likely on the site of a Roman fortification, at a very narrow isthmus of the peninsula, which was cut so that a small harbour could be accessed from both sides of the lake. The Venetians acquired it in the early XVth century and they strengthened it and improved the harbour facilities. In 1548 Michele Sammicheli, a famous military architect (see the fortifications he designed at Candia/Iraklion) recommended the replacement of the castle with a state-of-the-art fortress, but the Venetian Senate chose to build it at nearby Peschiera. The parish church of the small town was built towards the end of the XVth century and some ancient materials were used for its portico. The milestone was most likely originally placed along Via Postumia, a Roman road which linked Aquileia with Genoa across Verona. 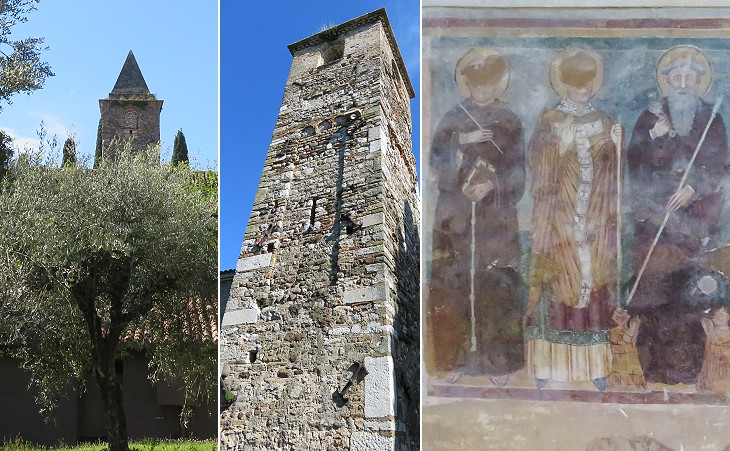 I came to a little village on the northern end of the lake of Garda, with a little port, or rather landing, place, which is called Torbole. There (..) I found the first olive-tree full of fruit. Goethe
The chiesa of San Pietro in the village of Sirmione is an ancient structure. Murray
Near the centre of the promontory, which is almost covered with olive-gardens, is the old Church of S. Pietro, with 14th-century frescoes. Hare
Virgil noted that that the storms on the lake were similar to those which occur at sea. Lake Garda is large enough to have a temperature mitigating impact on its shores which therefore enjoy a milder climate than the rest of Northern Italy. Olive trees do not grow north of the Apennines with the exception of this area. The same applies to lemon trees. Goethe defined Italy as the Land of Lemon Trees: Do you know the land where lemon trees blossom? (Mignon's Song - 1795). He first saw them at Limone del Garda: We passed Limone, the mountain-gardens of which, laid out terrace-fashion, and planted with citron-trees, have a neat and rich appearance. The whole garden consists of rows of square white pillars placed at some distance from each other, and rising up the mountain in steps. On these pillars strong beams are laid, that the trees planted between them may be sheltered in the winter. 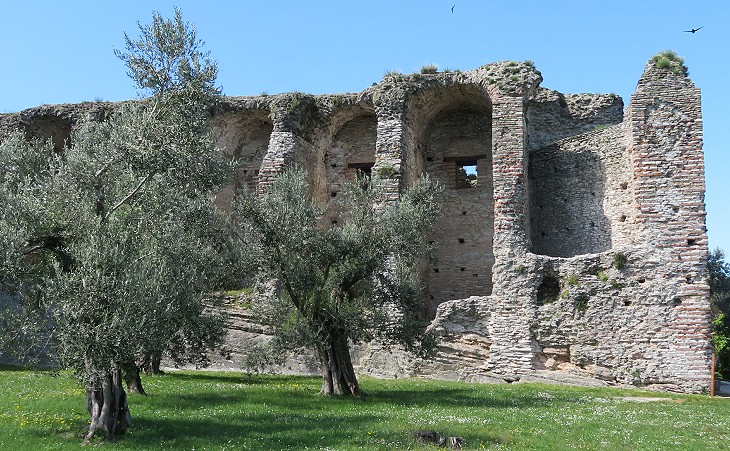 North-eastern walls of the Roman villa on the bedrock; they gave the name "Grotte" to the site; some of the olive trees are more than 400 years old

At the northern point are the Roman ruins which have long passed as the "villa of Catullus". They do not retain any architectural ornaments, but are massy and well constructed, and appear to have formed a parallelogram of nearly 600 feet in length on the longest side; and its extent, and the traces of former magnificence, prove that this building could not have been the poet's abode. Murray 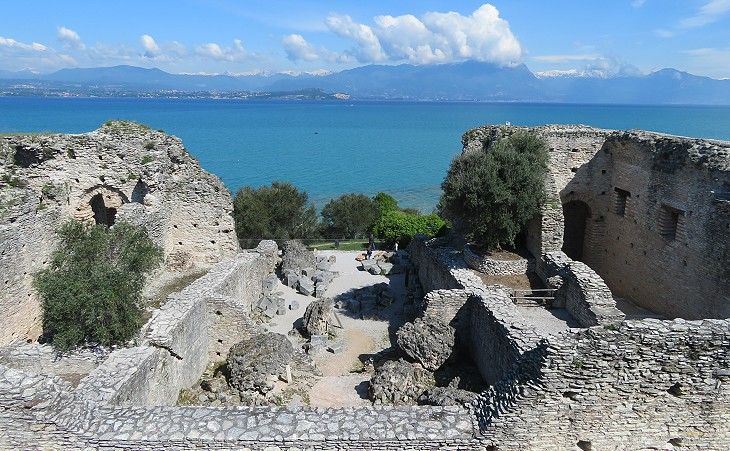 Hall of the Giants, thus named because of its size, a real belvedere

At the northern end, whence there is a grand view down the lake, and in a most charming situation, are the Roman walls and vaults called Le Grotte di Catullo. Hare
At the extremity of the promontory are still seen the relics of the villa of Catullus, in which he is supposed to have written many of his poems, especially the one beginning "Peninsularum, Sirmio, insularumque Ocelle". How endeared was the lake to the tender-hearted poet, and how its cool and placid shores brought solace to his bosom, rent with the passions of Rome's giddy life, Carducci tells in the song of the Sirens: "Come to us, Quintus Valerius! Here to our grottos descend still the sun rays, but silvery, and mild as those of Cynthia. Here the assiduous tumults that burden thy life but resemble the distant humming of bees". We feel ourselves to be listening for the poet, and would fain with him enjoy the fresh air, the soothing calm, "While Hesperus over the waters broadens his rosy face. And the waves are lapping the shore".
Frank Sewall - Poems of Giosuè Carducci (Nobel Prize in Literature 1906) - 1893 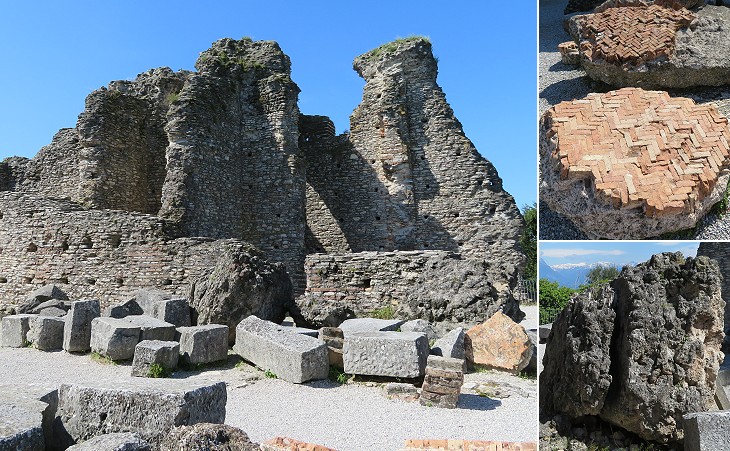 Hall of the Giants: walls and fallen parts of them with evidence of "opus spicatum"

Gaius Valerius Catullus lived in the first half of the Ist century BC and although he belonged to a rich family of Verona he could not have owned this very large villa which is dated early Ist century AD. The area was entirely acquired by the Italian State in 1948; archaeological excavations have unveiled the complex structures which lay beneath the olive groves and which created an enormous levelled terrace. Overall the villa had a rectangular shape. The northern short side had a gigantic aspect because the walls which supported the terrace were very high. 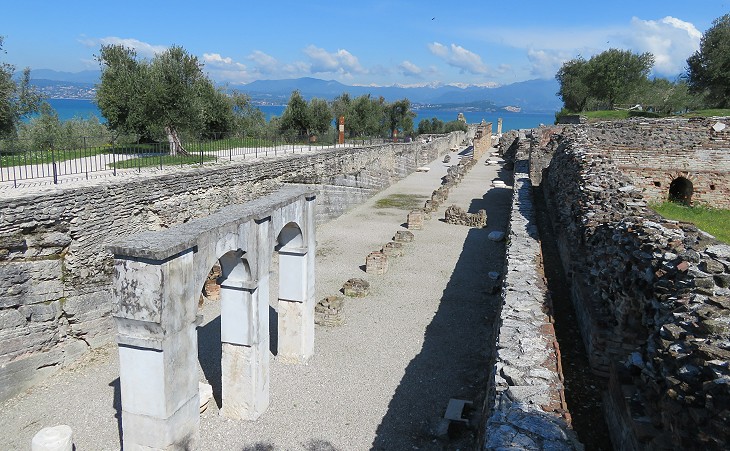 The entrance was situated on the southern short side; open or covered porticoes with commanding views over the lake run along the long sides. Archaeologists and historians have vainly attempted to identify the owners of the villa. We know with certainty that another Roman villa on the western side of the lake was built by the Nonii Arrii Macrini, a family from Brescia, but of ancient Roman origin whose branches are recorded in many Italian towns, e.g. at Herculaneum. They might have owned also this villa. Some of the sites of the villa have traditional names which do not accurately describe their use. The "pool" was not the natatio of a Roman frigidarium, but it was part of a bath establishment which is dated IInd century. It is situated near the entrance.
A visit to the Grotte di Catullo has a particular appeal for teenagers familiar with the works of the poet and in particular with these two verses: I hate and love. And why, perhaps you'll ask./ I don't know: but I feel, and I'm tormented (translation by A. S. Kline). The villa was not supplied with water by an aqueduct and therefore it had very large cisterns to store rainwater. The complex was abandoned during the IIIrd century, although no specific political or military events or natural causes explain the decision. Archaeologists came to this conclusion because materials from the villa were utilized at a nearby IIIrd century building. During the early Vth century, when the Roman Empire began to collapse, the northern part of the villa was turned into a small fortress and parts of it housed a small necropolis.
The existence of the villa was never forgotten and during the Renaissance the site was visited by literati and artists in search of inspiration. In March 1514 Isabella d'Este (aunt of Cardinal Ippolito II d'Este) and her husband Francesco Gonzaga, Marquis of Mantua, spent a day examining the ruins - which were even more wonderful to her, she enthused, as she had not seen the ruins in Rome - and walking and riding around to view them and their setting in detail. It was no surprise the Romans liked it so much, she told Francesco, suggesting (..) they could build a small casino on the ruins, "not for fame, because that would not be appropriate for our state, but for pleasure and convenience".
Christine Shaw - Isabella d'Este: A Renaissance Princess - 2019 (based on letters written by Isabella) 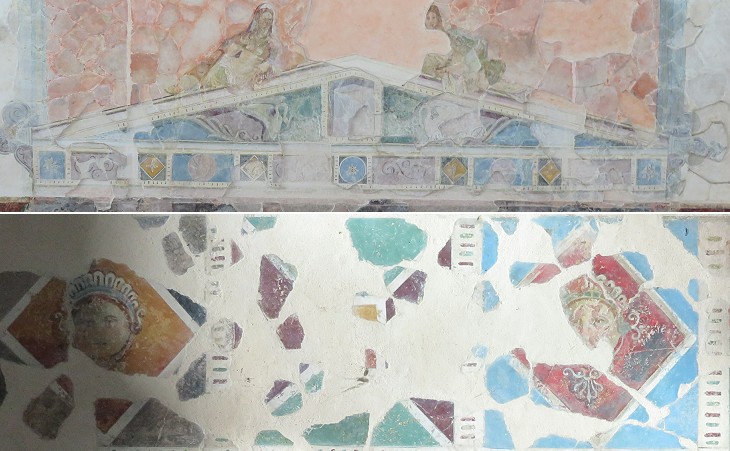 Antiquarium of the archaeological site: fragments of frescoes

Very often floor mosaics are the element of the decoration of a Roman villa which best withstood the ravages of time (e.g. at La Olmeda and Bad Kreuznach, not to mention the floor mosaics from Roman villas in the museums of Tunis ad Antioch). The floors of the Villa of Sirmione however were in opus spicatum and only a few fragments of mosaics were found; one of them was based on pelta, the shield of the Amazons, a very popular decorative motif (see a floor mosaic at Sabratha) and it is shown in the image used as background for this page. Archaeologists had more luck when they found fragments of brightly painted plaster which decorated the walls. 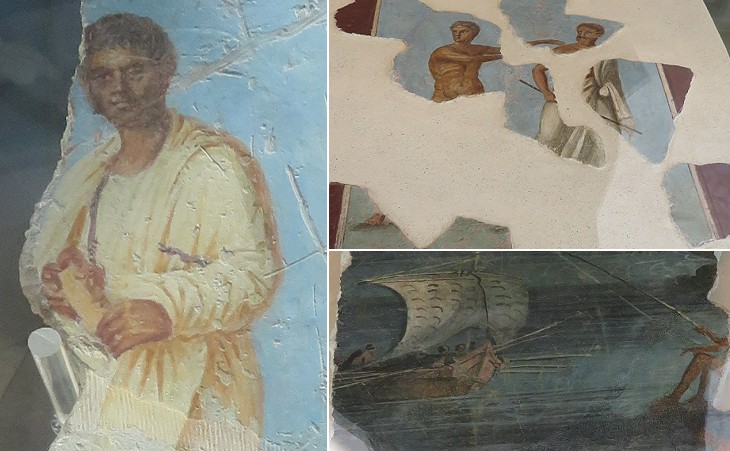 Antiquarium of the archaeological site: other fragments of frescoes, including a "portrait of Catullus"

Some of the fragments are of particular interest because they are not merely decorative as the so-called grotesques (see those at Casa di Augusto), but they show their painter had advanced skills in the depiction of personages and objects, in particular an approaching ship in a three-quarter view. For a better appreciation of the paintings which decorated a Roman villa you may wish to see a page on Villa di Poppea at Oplontis. 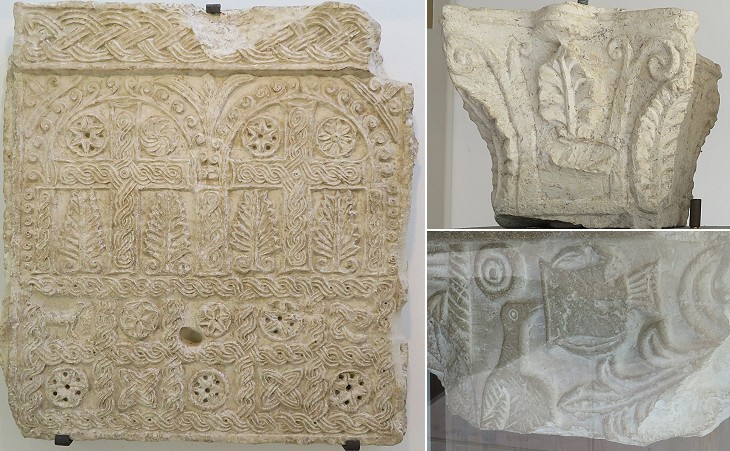 Nearby Brescia retains other interesting memories of that historical period.