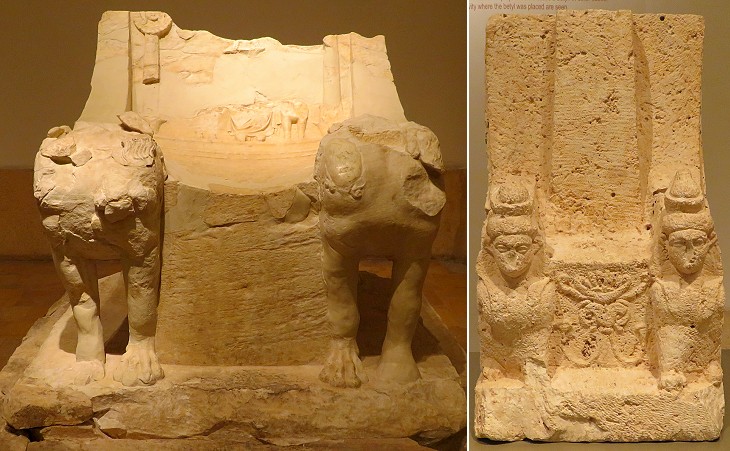 National Museum of Beirut: (left) throne of Astarte from the Temple to Eshmun; (right) another throne of the goddess. Perhaps a "baetylus", a sacred stone, was placed on them

Modern Sidon stands on the site of the Phoenician town so only limited archaeological excavations were carried out there. Those in the nearby countryside were very successful in finding evidence of the history and wealth of ancient Sidon. The ruins of a large building were identified at a short distance from the town in the early XXth century, but only the excavations by French archaeologist Maurice Dunand in 1963-1975 discovered inscriptions which indicated that they belonged to a temple to Eshmun, the tutelary deity of Sidon. No images of the god were found and the goddess Astronoe or Astarte, who is said to have fallen in love with him, was represented by an empty throne. Some archaeologists suggest that the Phoenicians were influenced by the Jews in refraining from portraying their gods. 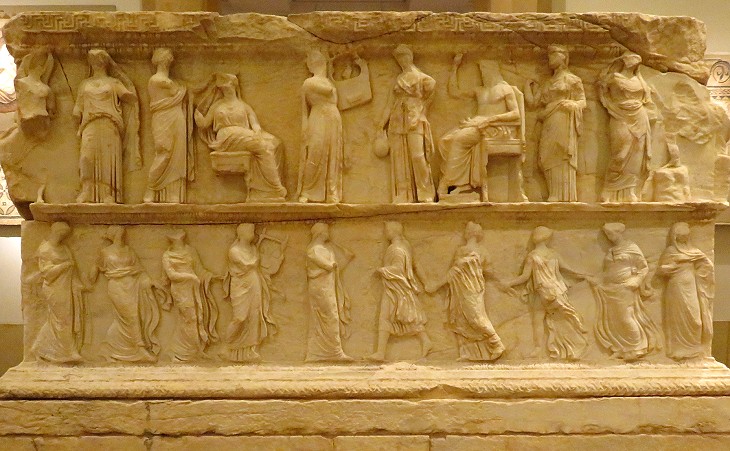 National Museum of Beirut: "tribune", perhaps a rectangular altar, from the Temple to Eshmun: upper relief: Apollo, Athena and Zeus and other goddesses; lower relief: dancers and instrument players, a sort of early Dionysiac procession

Similar to Byblos, Sidon was inhabited since Neolithic times, but the temple is not very ancient because it was built by the kings of Sidon in the VIth century BC. This small monument is dated IVth century BC and its reliefs show that the temple housed also the worship of Greek gods or perhaps of the Phoenician ones in a new Hellenized form. 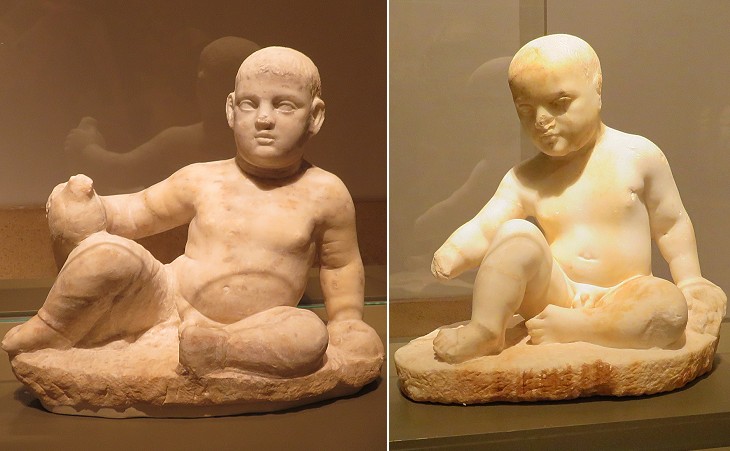 Eshmun was associated to Apollo and eventually to Asclepius, Apollo's son and the Greek god of medicine. The statues shown above were donated to call for the protection of the god's healing powers. The children were portrayed in a realistic way while playing with a toy or a bird. 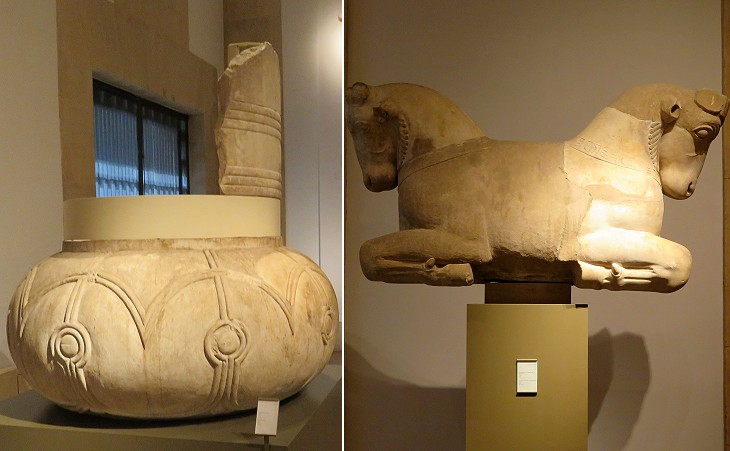 National Museum of Beirut: plinth (left) and capital (right) of a Persian-style column from Sidon

The construction and initial development of the Temple to Eshmun coincided with the conquest of Lebanon by the Achaemenid Kings of Persia. Sidon flourished during their rule and some monuments found in its environs show the influence of Persian patterns. 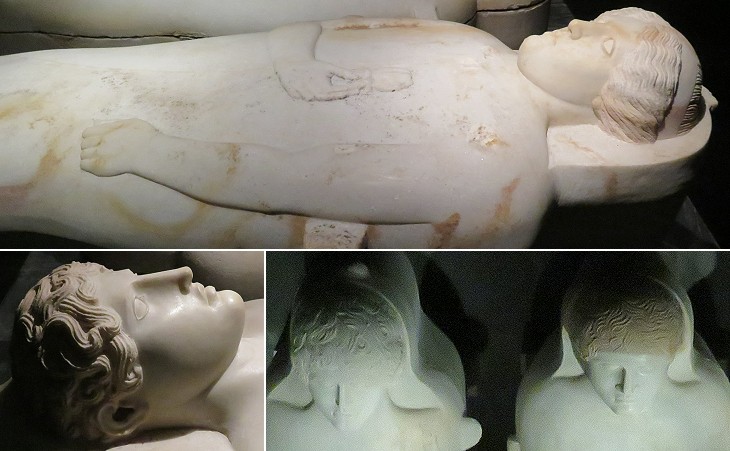 National Museum of Beirut: Ford Collection: IVth century BC anthropoid sarcophagi from near Sidon (see another image in the introductory page and other similar sarcophagi from Tartous and Gaza)

The commercial links of Sidon with Egypt and Greece led to the design of a particular type of sarcophagus which, similar to the Egyptian ones, has anthropoid features, but it is made with Greek marble and the depiction of the head often shows the influence of Greek sculpture. Many of the dead hold a votive offering (a patera, a dove, a flower, the branch of a tree, or some other object of the same nature) in their right hands. The Ford Collection is named after George Ford (1851-1928), Director of the American Mission School of Sidon who bequeathed the sarcophagi to the Lebanese State. 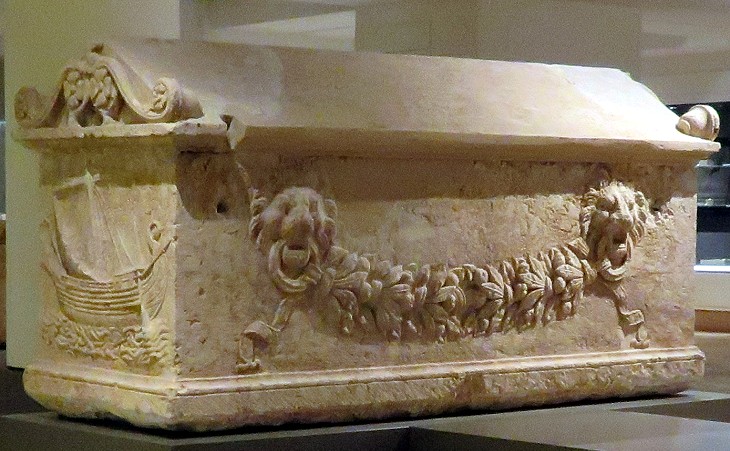 National Museum of Beirut: Ship Sarcophagus from Sidon (IInd century AD) (the ship is also shown in the image used as background for this page)

This sarcophagus has become a symbol of the maritime importance of Sidon and of Phoenicia, but it was not actually made at the heyday of the city's success, but when it was part of the Roman Empire. The relief on the short side of the box depicts a navis oneraria (merchant vessel), similar to those which can be seen in floor mosaics at Ostia and in a relief from Porto. 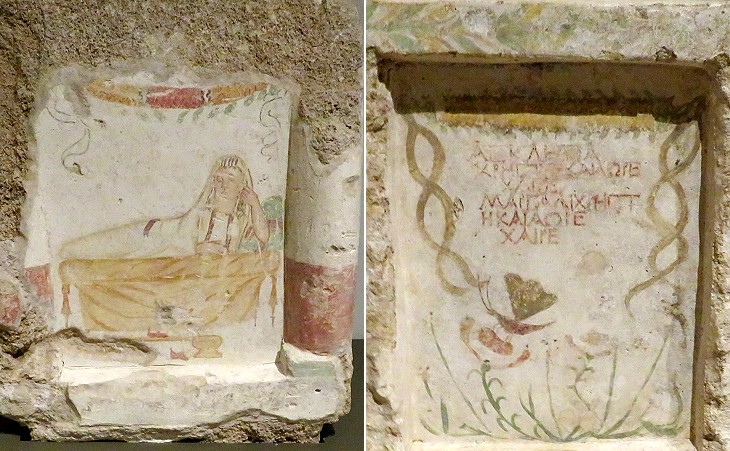 Going out of Sidon, I saw several sepulchral grots cut in the rock at the foot of the hills; some of them are adorned with pilasters, and painted in a very handsome manner.
Richard Pococke - A Description of the East and Some Other Countries - 1745
In 1940 an entirely painted hypogeum (underground tomb) was found near Tyre and it was reconstructed inside the Museum of Beirut, which houses also a number of limestone painted stelae from Sidon. That portraying a woman at her funerary banquet is a cheap version of a popular sarcophagus relief; the other one is less common: it shows a butterfly leaving the chrysalis, a reference to the soul leaving the body; the choice of this subject is perhaps explained by the inscription which says that the dead passed away prematurely. See a sarcophagus at Arles which depicts Psyche with her butterfly wings. 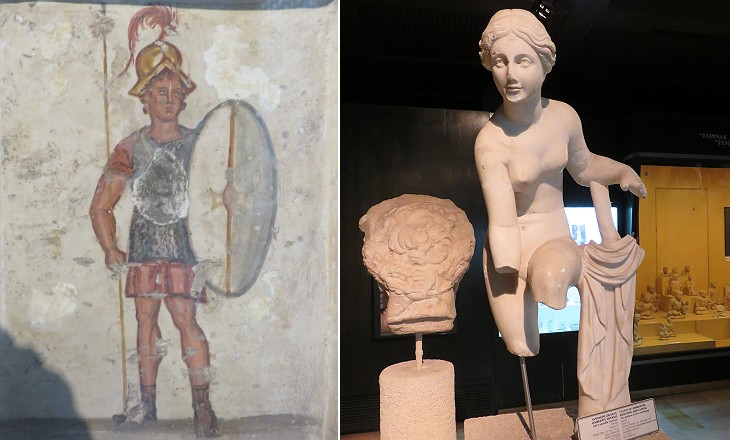 The painted stela was found in 1897 and it portrays Salmamodes, a soldier from Adada, most likely a town in Pisidia near Lake Egirdir. It is one of seventeen painted stelae depicting soldiers.
You may wish to see what Aphrodite did with her sandal ... 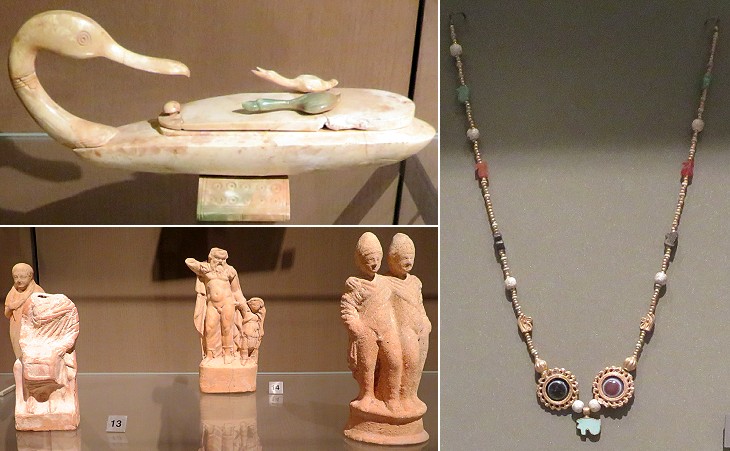 National Museum of Beirut: other exhibits from Sidon: (left-above) Pre-Roman period ivory box; (left-below) Vth century BC terracotta figurines; (right) Late Bronze Age necklace. In the introductory page you can see a statue in Egyptian attire, a mosaic on the lid of a sarcophagus and a relief depicting Mithra, all from Sidon

Return to The Town of Sidon.