- Salamis - page two
(Petra to Romiou, where Venus was born)

You may wish to see an introductory page to this section with a map or a page providing some historical background on Salamis and showing the Gymnasium, its most famous monument first. 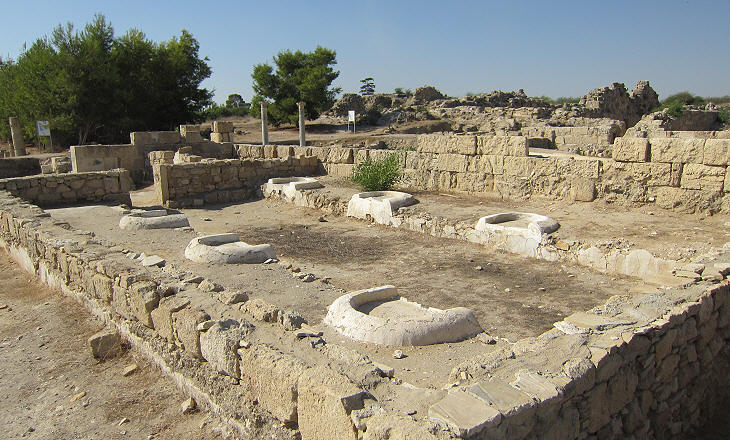 The events which led to the independence of Cyprus and eventually to its de facto partition in 1974 halted archaeological activities at Salamis for many decades. These have been resumed in recent years and have led to unearthing other monuments which are spread over a vast area to the south-west of the Gymnasium. 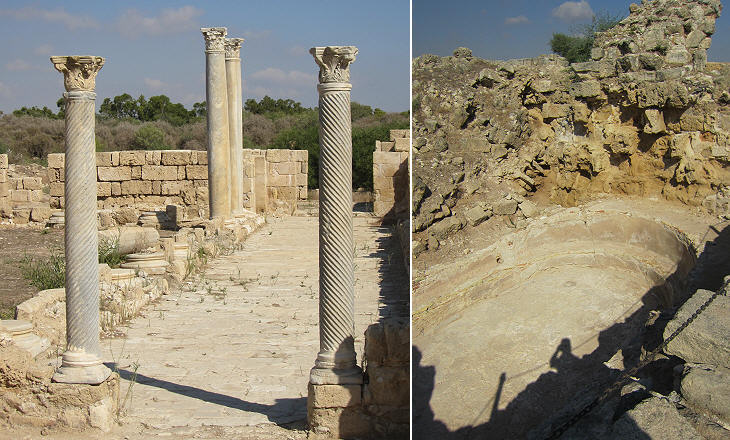 Baths near the Fish Market: (left) a courtyard; (right) a pool

A web site providing information on North Cyprus says in a page on Salamis that the Romans had an obsession for baths. Maybe obsession is not the right term, but it is true that even small Roman towns had more than one bath establishment. Spending some hours at the baths was part of social life and these facilities were often lavishly decorated. A large part of the mosaics and statues of the Roman period were found in baths. In general Roman architects did better in "lay" (baths, amphitheatres, bridges, aqueducts, roads, etc.) rather than in religious buildings. You may wish to see a page with excerpts from Seneca on what went on in a Roman bath establishment. 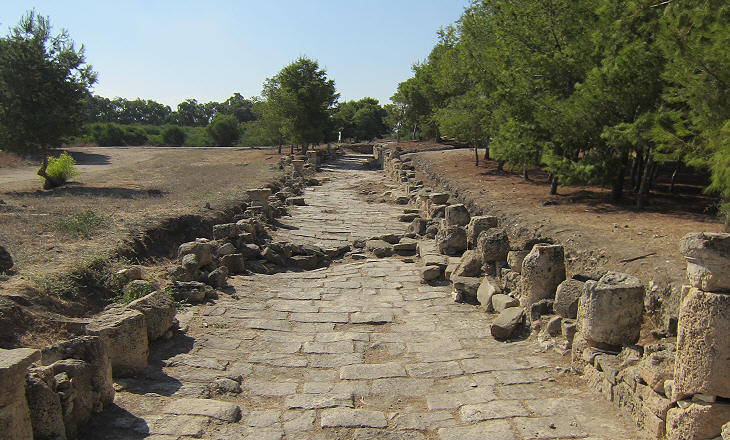 A colonnaded street was a monument which showed foreigners the wealth of a Roman town. Apamea and Palmyra in Syria retain very long colonnades which were in part built by donors who were remembered by inscriptions or small statues placed on the columns. At Salamis the remaining section of the colonnade (cardo maximus, the main north-south street) has a length of some hundred yards, from the Fish Market to Byzantine walls which protected a small section of Salamis in the late VIIth century, but in origin it reached the Agora/Forum which is located beyond the fortified enclosure. 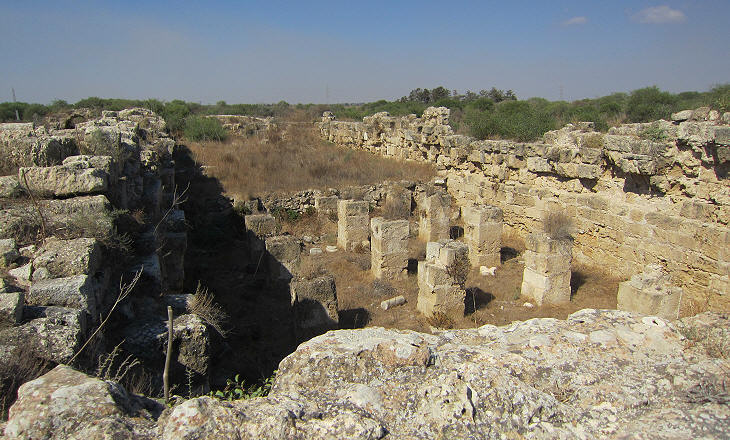 There is a square plain spot, which might be either a piazza, or a bason for water.
Richard Pococke - A Description of the East and Some Other Countries - 1745
Overall Cyprus is a rather arid island and the Romans had to build a very long aqueduct to supply Salamis with water from a spring at Kythrea at the foot of the mountains to the north of Nicosia. Water was stored in a large cistern on the highest point of a small elevation near the Agora. Conduits carried the water to the baths, fountains and public facilities of the town. Agora/Forum seen from the Great Cistern

The Great Cistern and the Agora are situated outside the ordinary tour which holidaymakers on the sunny beaches of Cyprus make to see the ruins of Salamis and therefore this part of the archaeological area is poorly maintained. The Agora had a rectangular shape; the long sides had porticoes and were five times longer than the short ones. The Cistern was situated at one end and a Temple to Zeus at the other one. The Cistern was incorporated into the Byzantine walls which were probably built with materials taken from the Agora. 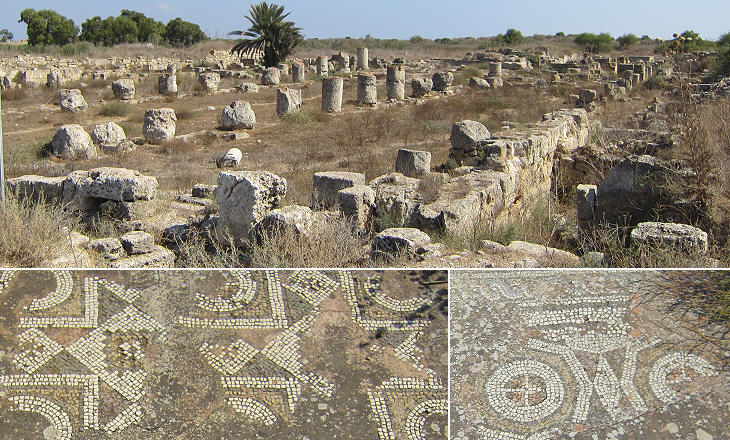 Agios Epiphanios and fragments of its mosaics

A very large Christian basilica was built towards the end of the IVth century after Emperor Theodosius declared the Christian faith (in its Nicene creed) the sole religion of the Roman Empire. The building had three naves and three apses and it is named after Epiphanius, Bishop of Salamis, who is renowned for Panarion, a treatise against heretical beliefs and is venerated as a saint and a Church Father by Orthodox and Catholics alike.
The Bishop of Salamis (or rather Constantia, the name of the town after its reconstruction by Emperor Constantius II) reported to the Patriarch of Antioch, but in the late Vth century Byzantine Emperor Zeno declared the Church of Cyprus autocephalous and therefore the Bishop of Salamis was empowered with all religious appointments on the island. The basilica was destroyed in the VIIIth century during an Arab raid. 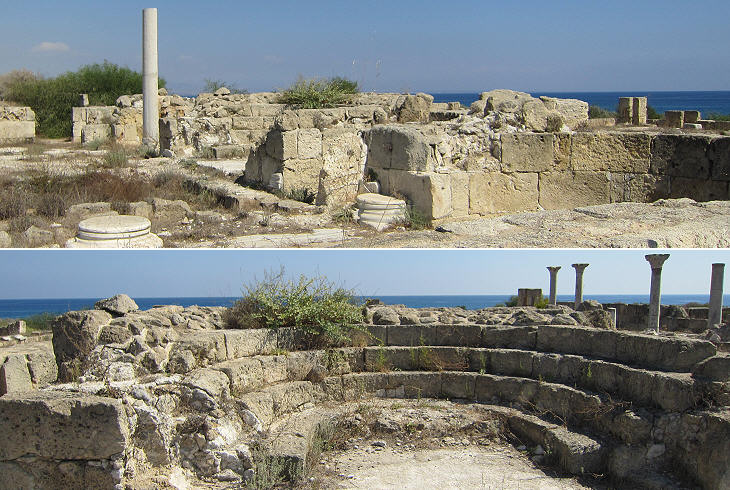 Kampanopetra: (above) area of the apses; (below) apse with "synthronon", collective throne i.e. seats for bishop and clergy, see that in Hagia Irene in Constantinople

On the side of the town, which is next to the port, there are ruins of a large church, and also of a small one. Pococke
Towards the end of the Vth century, the Bishop/Patriarch of Salamis built a large complex near the harbour. The church was preceded by a courtyard with cells for monks and perhaps for pilgrims on their way to the Holy Land. According to Georges Roux who led a French archaeological mission at Salamis, the complex was built on a terrace commanding a view over the sea, without utilizing parts of previous buildings. 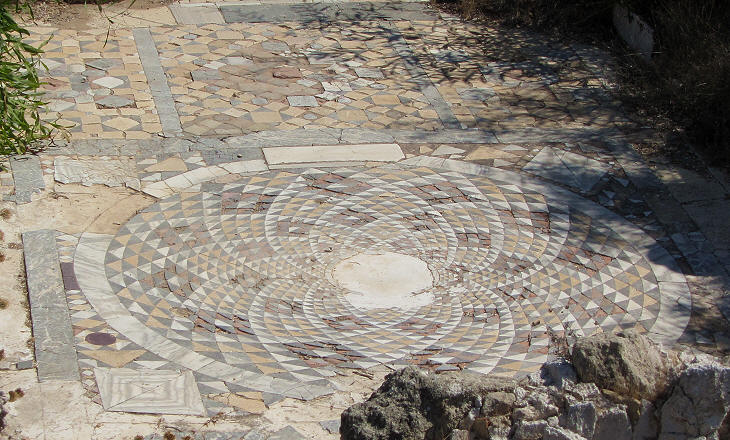 Kampanopetra floor of the atrium behind the apses

French archaeologists have found small buildings surrounding an atrium on a terrace behind the apses of the church. Because of the elaborate decoration of the atrium floor, they came to the conclusion that they housed a precious relic, possibly a fragment of the Holy Cross. Marble inlays or mosaics showing a vortex were rather popular throughout the Roman Empire and because they were not associated with pagan beliefs they continued to be used in Christian buildings. You may wish to see similar mosaics at Thysdrus in Tunisia (Pagan) and in Lebanon (Christian). 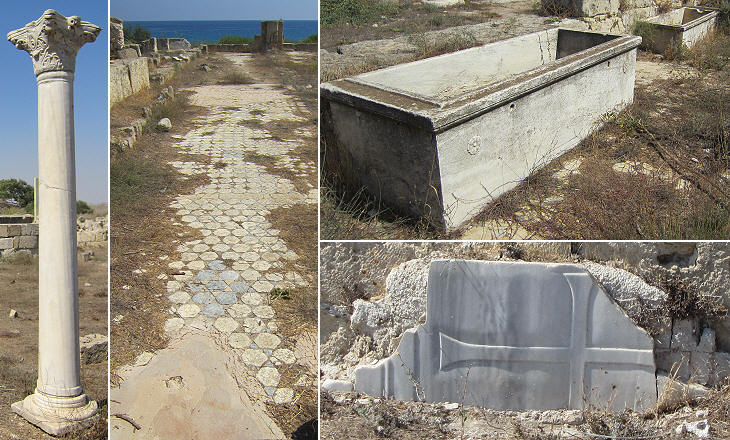 Kampanopetra: (left) a column; (centre) floor of the main nave; (right-above) a series of tombs serving as ossuaries in the south aisle; (right-below) a marble fragment with a cross

The image used as background for this page shows a Byzantine capital near the Great Cistern.

Return to page one or move to:
Introductory Page
Paphos
Amathous and Kition
Kourion