Kairouan - Other Monuments
(the Great Minaret at Kairouan)

You may wish to read a page with an introduction to this section and a map or a page on the foundation of the town and its Great Mosque first. 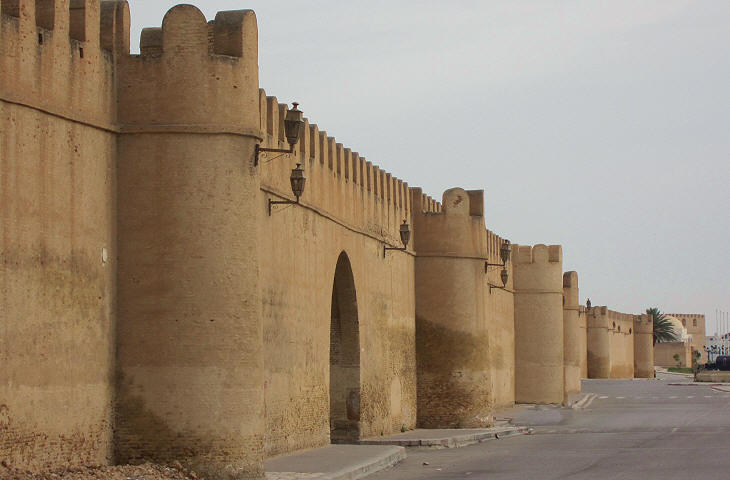 Kerouan is of an irregular oblong figure, surrounded by a crenelated brick wall, strengthened by towers and bastions, and pierced by five principal gates, and four posterns, now closed. The names of the gates are Bab el-Tunis (Tunis Gate); Bab el-Khavjch (Gate of the Peach); Bab el-Djelladin (Tanners' Gate) today Bab ech Choukhada (Martyrs' Gate); Bab el-Kasbah (Gate of the Fort); and the Bah el-Jidif (New Gate).
1895 Murray handbook for travellers in Tunisia and Algeria
The overall shape of Kairouan is puzzling considering that it was founded on a flat and barren area. The north-east/south-west axis is three times longer than the north-west/south-east one. 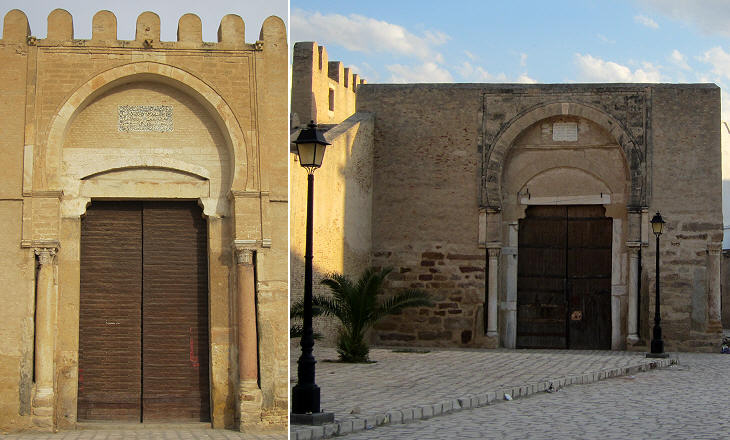 The historical gates of Kairouan were all built during the Ottoman rule, at the same location as previous gates and utilizing their ancient columns. Today some of them, such as the Sousse Gate are closed, whereas others are flanked by modern openings in the walls. The fortifications of Kairouan were never upgraded to the needs of cannon warfare and they were completely obsolete by 1881 when the French invaded Tunisia to impose their protectorate over the country. 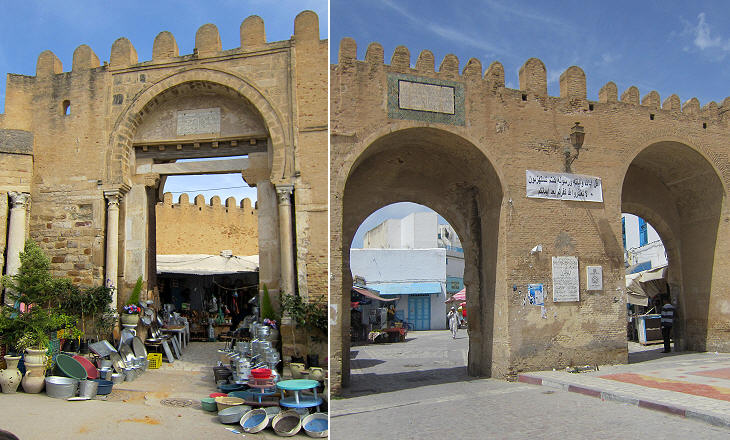 Because of the religious importance of Kairouan, the French feared that shelling the town would cause an uproar in all Muslim countries. They decided therefore to march on the town with almost all their army hoping that such a display of force would induce the local garrison to surrender.
Meyrick Alexander Broadley, a British lawyer who worked in Tunis, has left a vivid account of the seizure of Kairouan by the first column of French troops which arrived at the town.
Kerouan, October 26th. Kerouan surrendered to-day without a blow being struck. When we were within two miles of the town Colonel Moulin, escorted by some cavalry and his staff, galloped on, and in a few minutes came within easy firing distance. Flanking parties of cavalry were sent out on each side of the town, and I went on with one of them. We rode right up to the walls, and immediately after the inhabitants hoisted the white flag on the tower of the Great Mosque. The staff then advanced to within speaking distance of the walls and in a few minutes we were met by the Governor-General Mourabet, who rode towards us on a mule, led by two grooms, and who wore an enormous pair of yellow slippers. Mourabet declared that he voluntarily surrendered the town. The order to march was then given. Just one hour after the advance guard had reached the walls, the troops began to defile into the city through the Bab-el-Khaukh. Each battalion was headed by its trumpeter playing a fanfare. All the column passed through the town and then came out by the Tunis Gate on the opposite side.
M. A. Broadley - The Last Punic War. Tunis past and present. - 1882 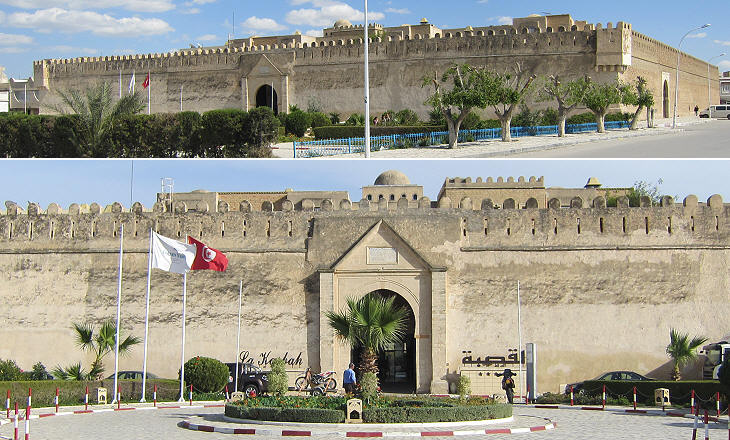 The garrison of Kairouan was quartered in a kasbah, a citadel near Bab el-Tunis. It is not a particularly impressive fortification notwithstanding some improvements made during the Ottoman rule. Today it houses a luxury (but affordable) hotel, which owing to its central location is very convenient as a starting point for wanderings in the narrow streets of the old town. Most of the minarets of Kairoaun resemble that of the Great Mosque and the towers of many Italian medieval towns (or Torri de' Capocci in Rome). It is possible that they were so designed to be used as fortifications in case enemies managed to enter the town. They have been decorated with bricks which form inscriptions praising God. 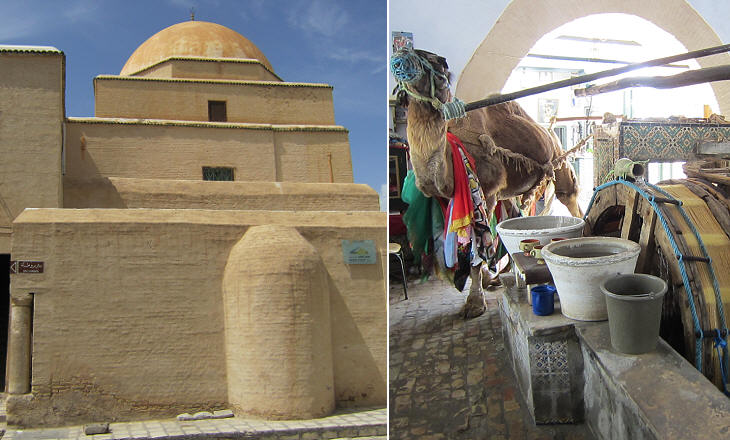 In the centre of the town is the sacred well el-Barota, supposed to have a communication with Zemzem at Mecca; it is enclosed within a domed building, and is the only one in the city. Murray
The pilgrimage to Mecca is one of the Five Pillars of Islam, the key obligations for a Muslim. In the past it was an obligation very difficult to comply with for the Muslims of northern Africa and a pilgrimage to Kairouan became a sort of alternative. The town was regarded as a holy one and the water of a well within its walls was thought to come from Zamzam, a miraculously-generated source of water which is located very near the Kaaba of Mecca. Drinking from Zamzam is part of the rituals performed by pilgrims.
Today the well is a popular attraction because of the camel which earns its living by activating a mechanism which raises jars of water. 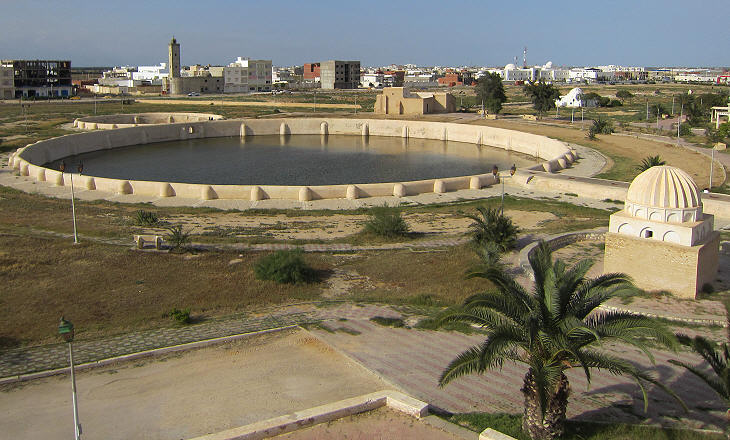 The location chosen for founding Kairouan in the VIIth century was dictated by military needs, but when the town developed and became the capital of the region, its being situated in a very arid area required the construction of reservoirs where water coming from a remote spring was stored. The water was cleared from debris and other impurities by being moved from one reservoir to the other. The basins were built in the IXth century a mile north of the walls and were reactivated by the French in the late XIXth century. 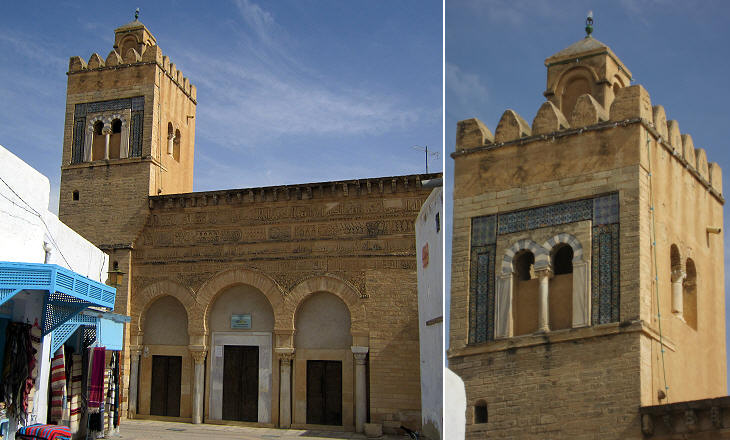 The oldest mosque of Kairouan (except for the Great Mosque) is located in a small square in the centre of the old town. It was built in the IXth century and it was modified in the XVth century by the addition of a minaret which shows the influence of Spanish Moorish architecture. Its design is unusual because the prayer hall is not preceded by a portico or a courtyard, but it is directly accessed from the street. It is a single chamber supported by sixteen ancient columns, similar to those which decorate the façade. 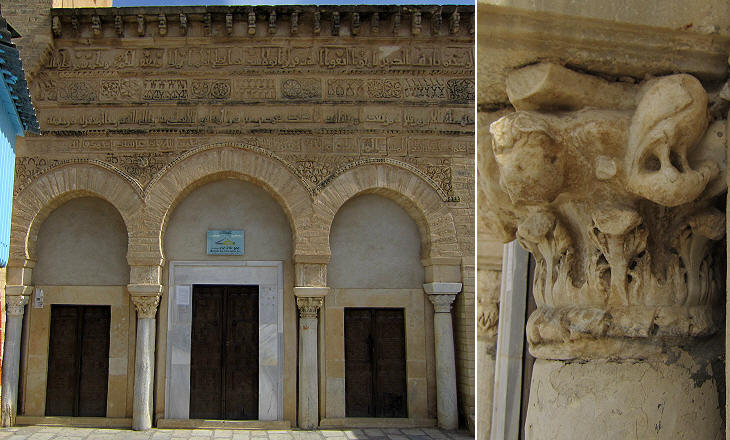 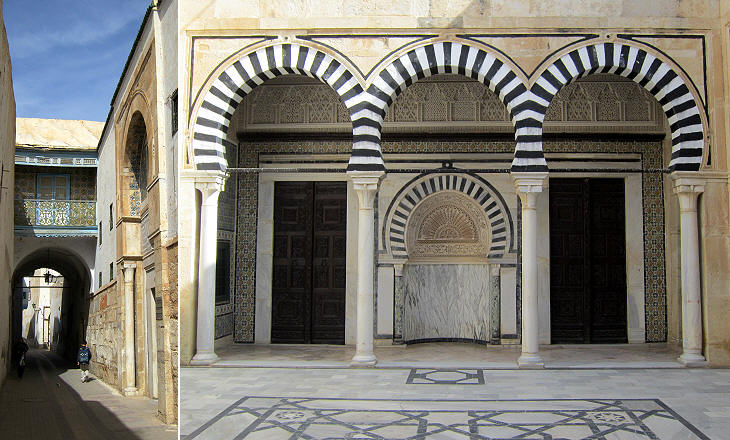 Zaouia is the term used in Tunisia for indicating a medrese, an Islamic school. It often includes the mausoleum of its founder who in the case of this zaouia was regarded as a saint (sidi means saint). Abid el-Ghariani died in ca 1402 and he was a member of the Almoravides clan which ruled over southern Spain and northern Africa in the XIth/XIIth centuries. 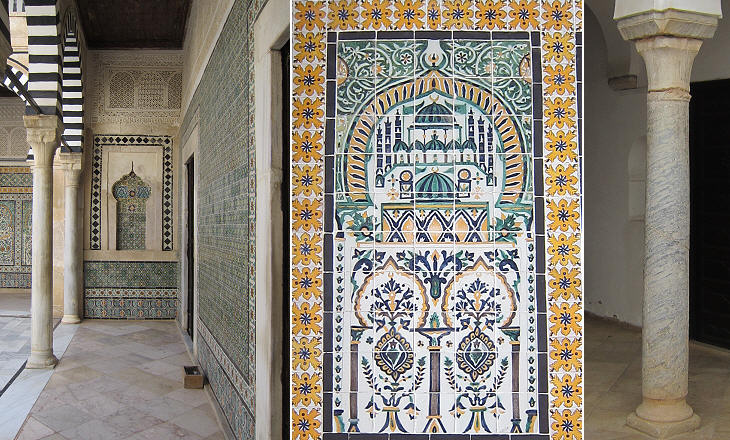 The descendants of Abid el-Ghariani held important positions in the administration of Kairouan in the centuries following the foundation of the zaouia and they gave it an Ottoman aspect with the exception of some columns of the original building. 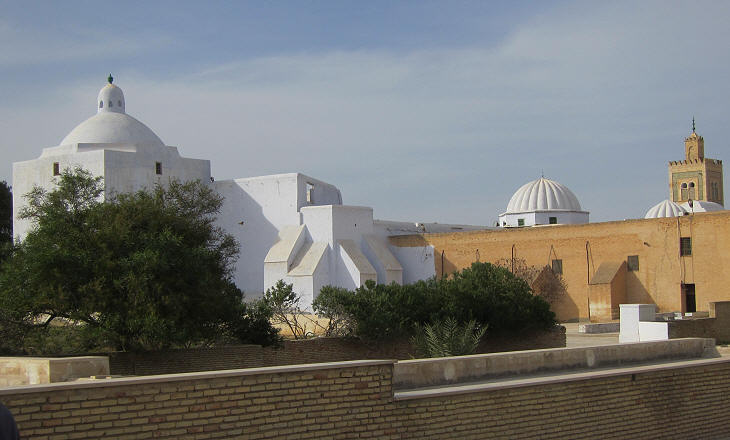 Outside the walls to the N. W. of the town, is the most important building of Kerouan, the Jemaat ea-Sahebi, wherein is interred one of the companions of the prophet, Abdulla ibn-Zeinma el-Belouij whence its familiar name, "Mosque of the Companion." With him are buried, what he always carried about him in life, three hairs of the prophet's beard - one under his tongue, one on his right arm, and the third next his heart. (..) The shrine of "The Companion" is about six metres square, and dimly lighted by four small windows with coloured glass; a fine chandelier of Venetian glass hangs from the dome, and there are the usual accompaniments of smaller lamps, balls, ostrich eggs, etc. Murray 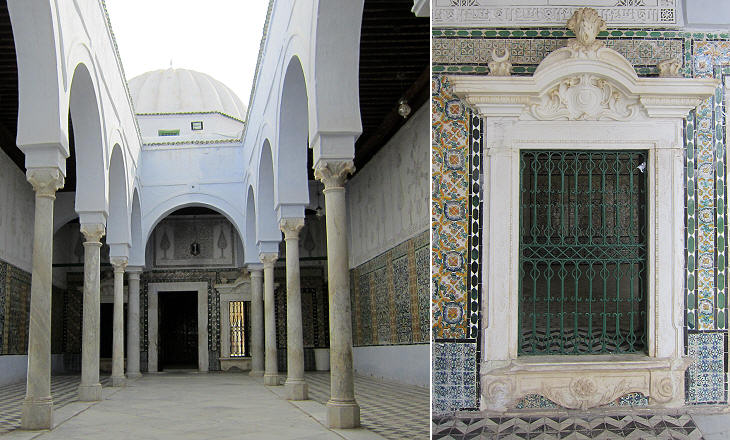 Sidi Sabhi Zaouia: (left) one of the courtyards leading to the shrine; (right) detail of a window showing the influence of Italian architecture

The zaouia was founded in the XIVth century, but the current complex is mainly dated XVIIth century and it was largely renovated in the XIXth and XXth centuries, so that it is more a modern repertory of Islamic art than a monument of that art. This applies to other XIXth century zaouia of Kairouan. 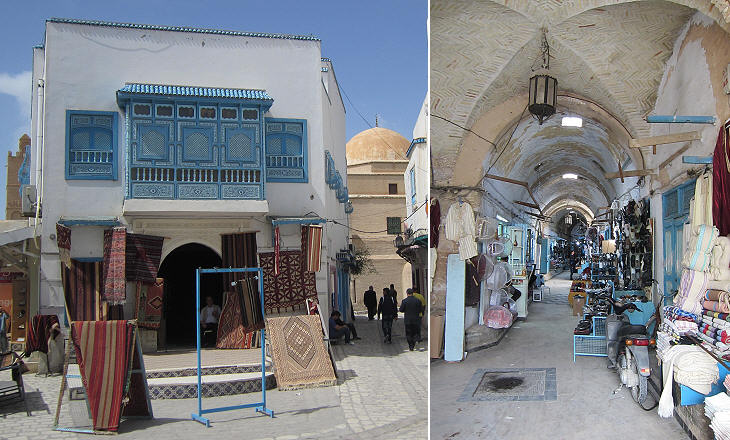 (left) A carpet shop near Bir Barouta; (right) one of the souks of the main market area

The market of the old town caters to tourists to a very great extent. Those who come in an organized journey cannot escape a visit to one of the many shops selling carpets. A feature of a "typical traditional Tunisian house" is the blue colour of its windows and doors. It is a very modern feature as it derives from the decoration of Ennajma Ezzahra (The Star of Venus), a palace built by French Baron d'Erlanger at Sidi Bou Said between 1912 and 1922 (see an image of its courtyard).
The icon of this section shows one of these typical buildings (in 2012 it housed a carpet shop) near the Great Mosque and the image used as background for this page shows a detail of its windows.

Return to page one and see the Great Mosque or move to:
Introductory Page
Bizerte
Mahdia
Monastir
Sfax
Sousse
Tunis
and An Excursion to La Goulette and Sidi Bou-Said