and Other Monuments of Hama
(one of the chanting wheels) 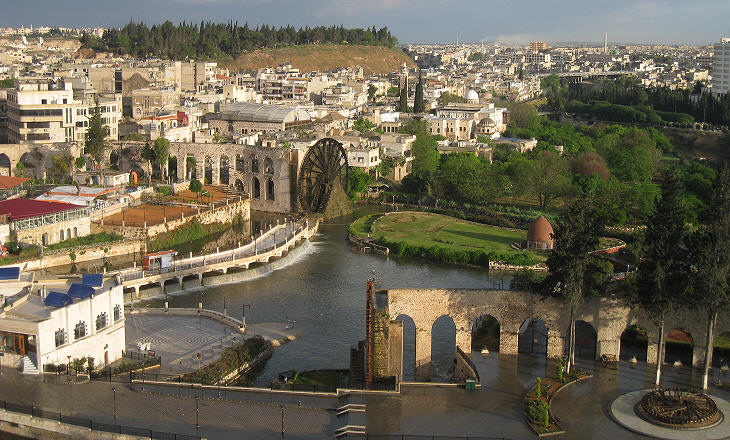 Overall view of the norias in (today's) centre of the town: in the background the hill where the citadel of Hama was located

Hamah, another of the metropolitan cities of Syria, is surrounded by orchards and gardens, in the midst of which there are waterwheels like revolving globes.
H. A. R. Gibb - Selection from the Travels of Ibn Battuta in 1325-1354
The most remarkable object at Hamah is the mode of raising water for the supply of the inhabitants; the town in general being built on ground considerably higher than the level of the river, large Persian wheels are used for the purpose of raising the water; along the banks of the river are several, and one of the largest, from an accurate measurement, we found to be sixty-seven feet in diameter; the circumference of the wheel is hollow, and divided into partitions, with small apertures to admit and discharge the water: by means of a dam across the river, a strong current is forced into a narrow channel along the bank, and thus small projecting pieces of wood being disposed at equal distances along the circumference, the wheel turns round on its axle; the partitions are filled as they pass through the water, and when they arrive at the opposite point above, discharge their contents into an aqueduct: the aqueducts are built of stone, supported by irregularly shaped arches, and of course, where the water is first raised, are as high as the wheel.
Travels through part of the ancient Coele Syria and Syria Salutaris - from the papers of Lieutenant Colonel Squire - Edited by the Rev. Robert Walpole - London 1820. 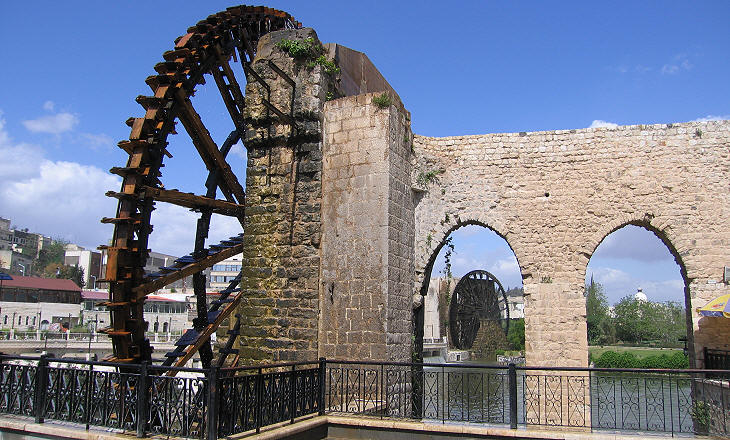 Colonel Squire however added: these aqueducts, intermixed with the trees, the movement of the wheels, and the murmuring of the water, have a very uncommon and pleasing effect. He basically followed an earlier description of the wheels:
As many parts of the town are much higher than the Orontes, they have a method of raising the waters by a great number of wheels in the river made with boxes round them, by which the water is raised to several aqueducts, consisting of very high arches, which, if well built, might be compared to many of the Roman works; some of the wheels are near forty feet in diameter, and raise the water to within five or six feet of their height, which is conveyed along the side of the hills.
Richard Pococke - A Description of the East and Some Other Countries - 1745
These accounts have helped to save the norias of Hama when they lost their practical purpose. 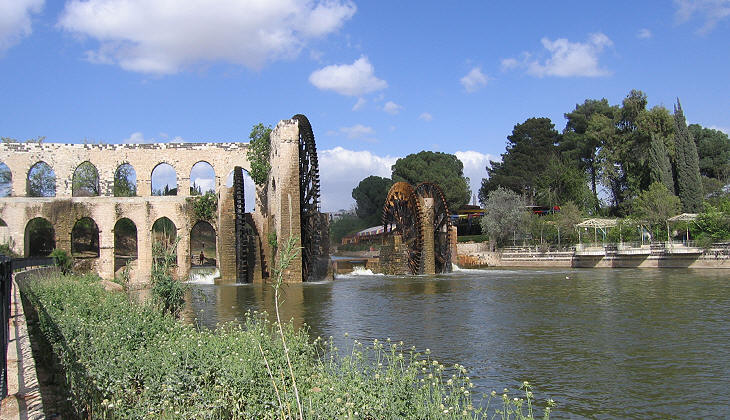 The four norias in the eastern outskirts of Hama

Nahr al-Assi, Rebel River, is the Arab name of the Orontes; the name refers to its south-north direction in a region of great (Tigris, Euphrates) and less great (Jordan) rivers going in the opposite way; it also refers to the floods caused by the Orontes and to the efforts made to prevent them by building high banks; at some locations the river bed is almost at a higher level than the country it crosses, so the development of norias responded to the need not to weaken the banks by opening canals for irrigation of the fields and human consumption. 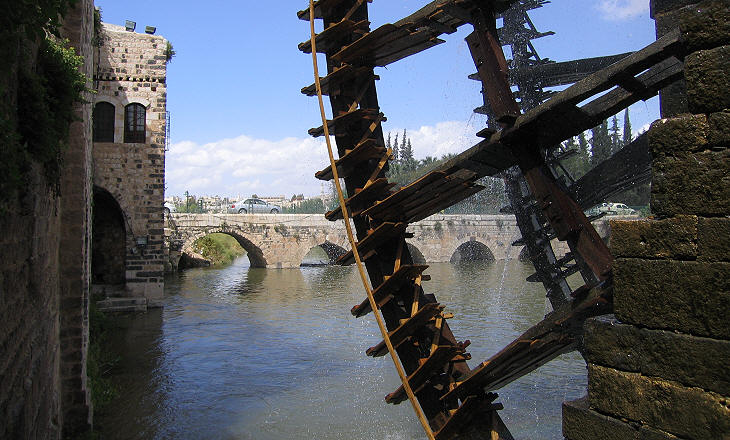 The development of gigantic norias is thought to have occurred between the XIIIth and the XVth century when the area around Hama knew a period of flourishing agriculture, but the technique was already known in ancient times and a Vth century mosaic in the National Museum of Damascus shows a noria on the Orontes. 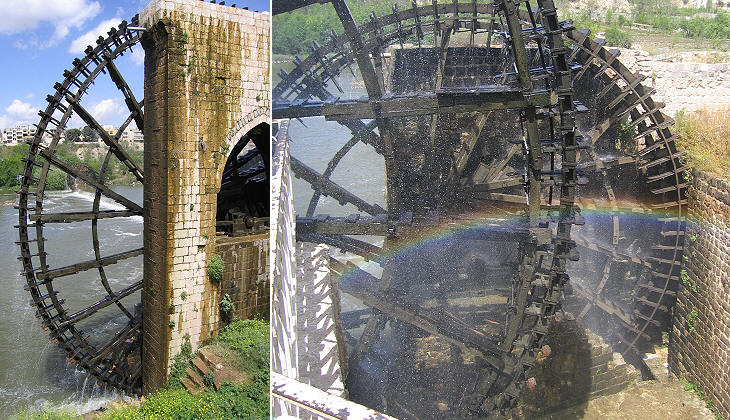 A noria in order to properly function requires careful control of the river flow; usually a low dam forces the river current into two small passages near the river banks where the norias are positioned; a series of locks in association with the dam can increase or decrease water flow in order to maintain a constant flow in the passages; in some cases a single passage activates two parallel norias. 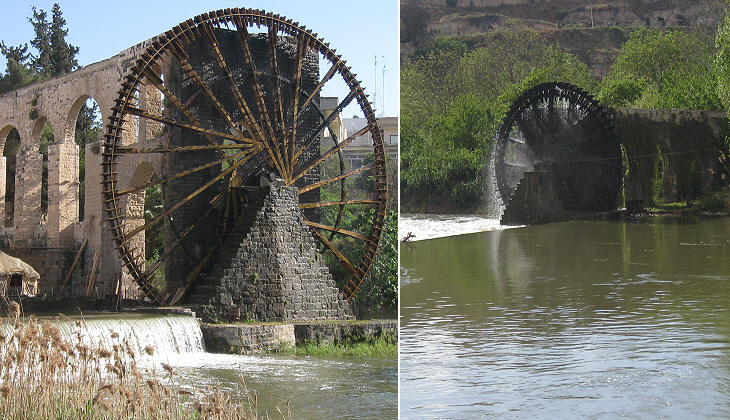 (left) Mouhammadiye Noria (the largest one); (right) a small noria in the western outskirts of Hama

During the day it is rather difficult to perceive the howls described by Barrès at the norias in the city centre, but this is possible at those located in more peaceful surroundings; at first the splashing of the projecting pieces of wood into the water seems to absorb any other sound, but once one gets accustomed to it the low "cry" made by the rotation of the axle on its supports becomes audible; the two are made of (wet) timber and their friction makes the noria chant a sort of religious hymn. 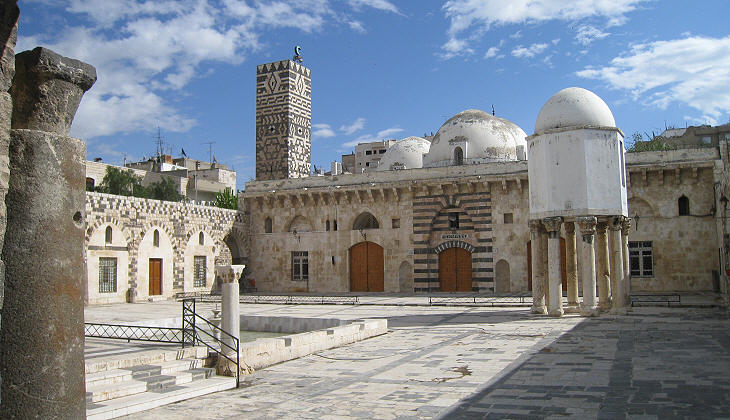 After the death of Muhammad, Islam was led by four Caliphs; in 656-661 a sort of civil war broke out in the Muslim world; eventually a distant relative of Muhammad founded the Umayyad dynasty which ruled over almost all of the countries conquered by the Muslims until 750.
The Umayyads set the capital of the Caliphate at Damascus and the whole of Syria benefited from being at the centre of a vast empire.
According to Hama's tourist office the Umayyad mosque is the fourth oldest mosque in the world. Unfortunately in 1982 it was severely damaged during the repression of a rebellion to the central government; the two minarets were razed to the ground. 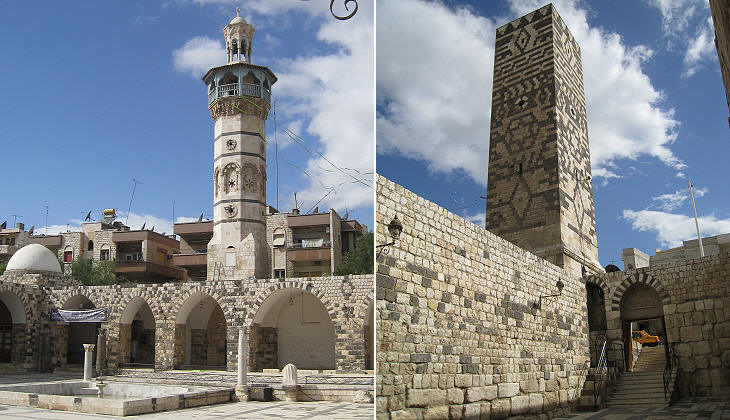 The mosque has been reconstructed in line with its original design; the older minaret has the appearance of a stout tower and it is thought to have been built in the XIIth century making use of a previous minaret; in 1427 the Mameluke built a second minaret, very similar to other minarets in Aleppo. 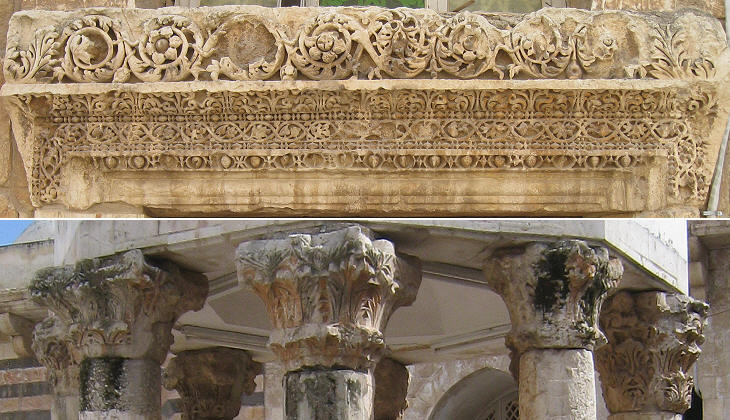 There are very little remains of antiquity here, except some ruins of an old gateway, and some few capitals and pillars. Pococke
The mosque was built by modifying an existing Byzantine church which in turn was the adaptation of an ancient Roman basilica. Hama has been continuously inhabited since the most ancient times as proven by findings in the former citadel. 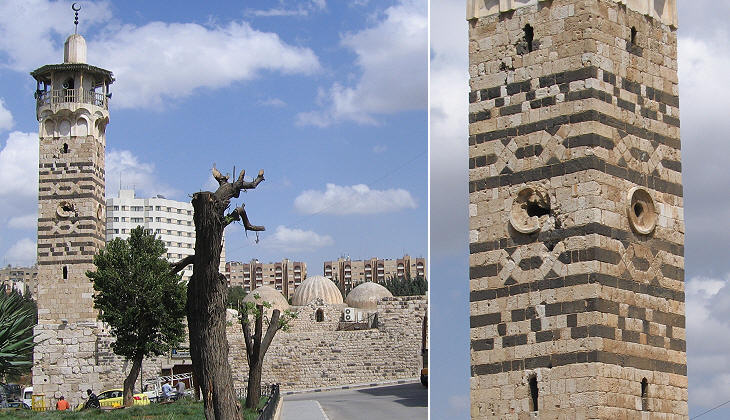 In 1108 Hama was conquered by the Crusaders, who were able to hold onto the town only for six years; Hama however remained exposed to their raids until Nur ad-Din, governor of Aleppo, conquered several Christian fortresses. In 1172 he ordered the construction in Hama of a mosque which is located near the Orontes and which has a fine square minaret, made of alternating bands of black basalt and yellow limestone. 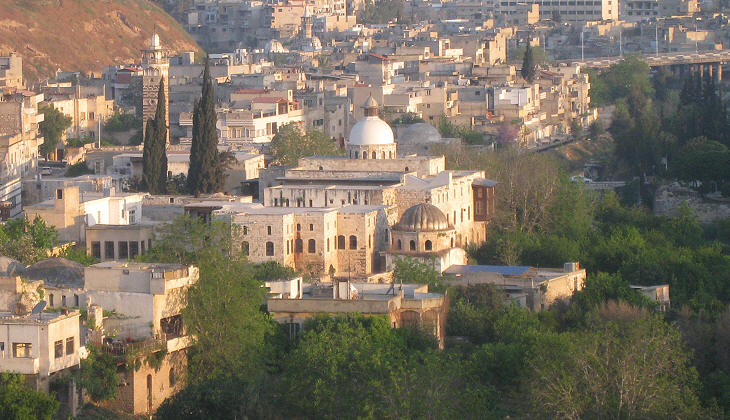 In 1516 Hama and the whole of Syria were conquered by Ottoman Sultan Selim I; Hama became the capital of a sandjak (district) which was part of the Damascus vilayet (province). During the long decline of the Ottoman Empire after the failed 1683 siege of Vienna, the administration of the provinces was entrusted to local governors, who often were able to pass their office to their descendants, thus forming a sort of local dynasty. The Al-Azem family ruled over Damascus and its vilayet for long periods in the XVIIIth and XIXth centuries; in Hama they built a very elegant set of buildings by the river (a larger palace is named after them in Damascus).