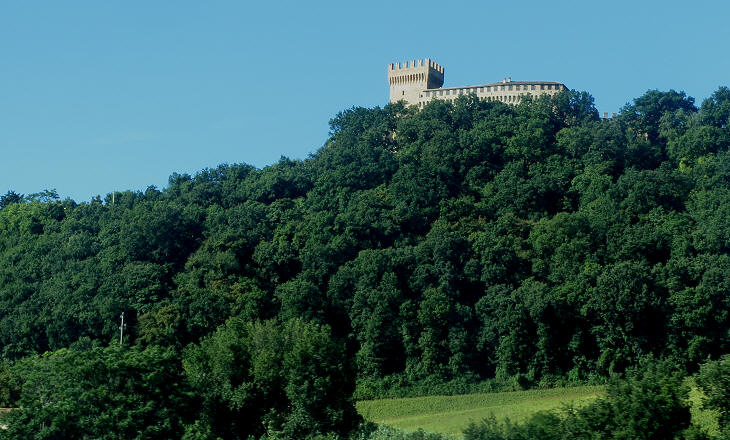 Rocca di Gradara seen from the road from Pesaro to Rimini

Gradara is situated on a hill near the road between Pesaro and Rimini, the ancient Via Flaminia. A castle with a high tower was built in ca 1150 by a local family. In 1283 it was acquired by the Malatesta, who were the de facto rulers of Rimini and almost immediately they started to build walls around the castle in order to protect a small settlement. 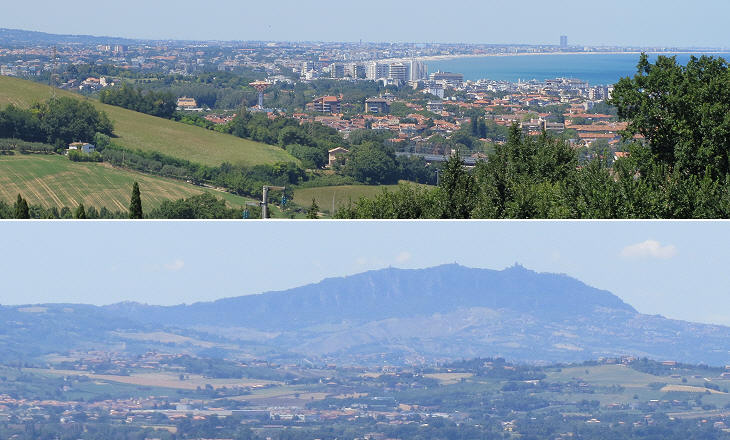 Gradara is located at the junction between the Italian peninsula and the northern part of the country, a large plain between the Apennines and the Alps. The view northwards is spectacular and on a fair day it reaches well beyond Rimini. The view inland is marked by the three peaks of Mt. Titano (739 m/2,425 ft), an isolated mountain which houses the Republic of San Marino, the only Italian Comune (medieval city-state) which has managed to retain its independence.

The walls built in the early XIVth century were strengthened in 1446 by Sigismondo Pandolfo Malatesta; in particular he built la Rocchetta, a tower at the north-western corner of the enclosure which was designed taking into account the development of cannon warfare. It is a very early example of a tapering tower, which was able to withstand the impact of stone balls fired by special siege cannon. The importance of the new weapon was fully understood in 1453, when the Ottomans seized Constantinople by opening a breach in its walls using a giant cannon. 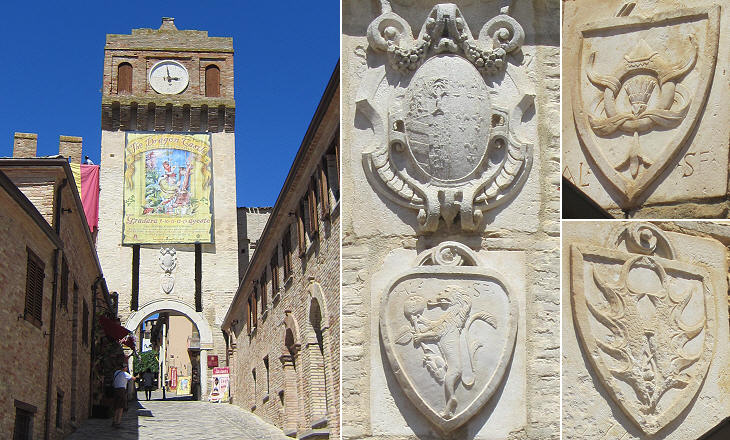 The fortifications of Gradara however proved useless when the fortunes of Sigismondo Malatesta declined: in 1462 he lost Senigallia and in the following year Fano. Pesaro was already in the hands of Alessandro Sforza, brother of the Duke of Milan, and in October 1463 Pope Pius II assigned Gradara to him. In 1512 the town became part of the Duchy of Urbino. 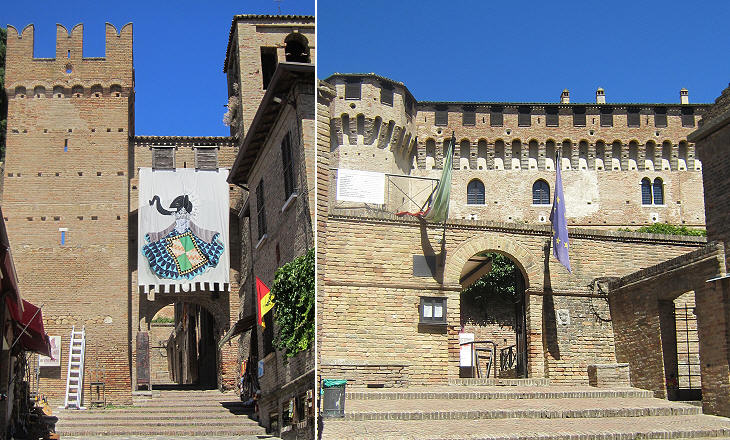 Gates (inside the town) leading to the castle

In 1631 the Duchy of Urbino became a direct possession of the Papal State. In the new political environment Gradara lost its military importance and the small fiefdom was leased to local families. The castle and the fortifications of the town fell into abandonment until 1920 when the castle was bought by Umberto Zanvettori. He started a careful restoration of the whole town. He was the Eugène Viollet-le-Duc of Gradara, the architect of Emperor Napoleon III who is best known for his "restorations" of medieval buildings. 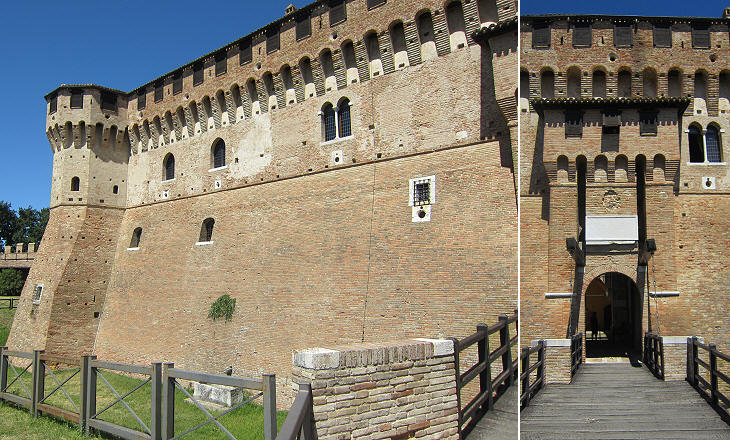 Zanvettori, assisted by a team of architects and art historians sharing his views, brought the castle back to its appearance at the time of the Malatesta. It was an enterprise into which Zanvettori poured an enormous amount of money, to the point that he had to sell his collection of ancient weapons to the Italian State. Details of the Castle: (left) ancient Roman stones one of which bears an inscription (in the courtyard); (centre) cannon slit with the initials IO(annis) SF(orza); (right) coats of arms of Alessandro Sforza (above) and Pandolfo II Malatesta (below)

Eugène Viollet-le-Duc did not hesitate to add turrets, battlements and spires if he felt they would make medieval monuments more evocative. The final result is that one does not know whether he is watching a medieval monument or an example of Gothic Revival architecture. This applies to some extent to Gradara too, where some details or coats of arms are likely to have been added or excessively restored. 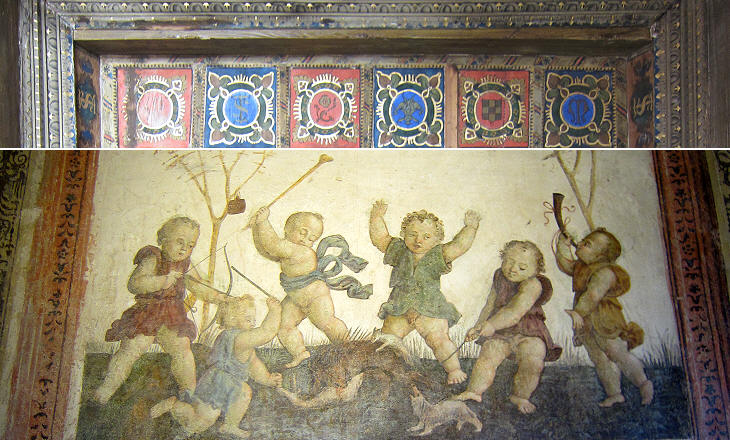 (above) Ceiling with the heraldic symbols and monograms of Sigismondo Pandolfo Malatesta: (below) frescoes showing hunting children

The Malatesta and the Sforza decorated an apartment inside the castle where according to tradition Lucrezia Borgia, daughter of Pope Alexander VI, lived for a while with Giovanni Sforza, her first husband. The frescoes and the nice views over the sea and the countryside apparently did not elicit feelings of love in the couple, because a few years later Giovanni was forced to admit he had not consummated the marriage. 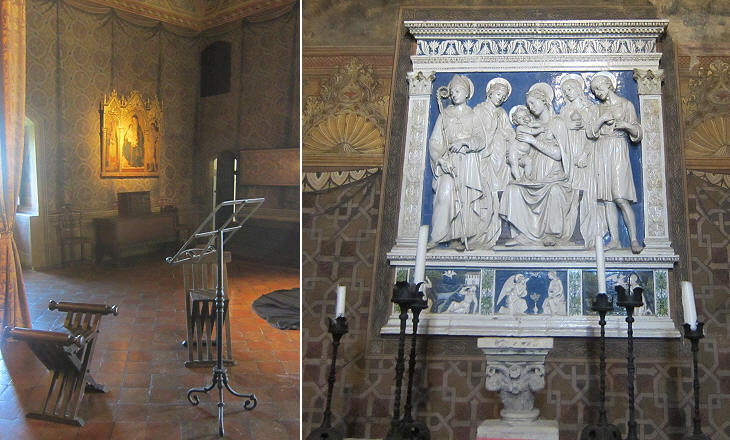 Zanvettori bought furniture and works of art on the antiquarian market to give visitors an idea of the life in the castle at the end of the XVth century. One room however recalls an event of the very early days of the Malatesta at Gradara. According to tradition Francesca da Polenta (from Ravenna), wife of Gianciotto Malatesta, fell in love with Paolo, Gianciotto's brother, while the two were reading a book. They were killed by Gianciotto when he heard about their affair. Lord Byron translated Dante's account of the event (Inferno - Canto V). The image used as background for this page shows a painting by Dante Gabriel Rossetti portraying Paolo and Francesca.

"The Land where I was born (1) sits by the Seas
Upon that shore to which the Po descends,
With all his followers, in search of peace.
Love, which the gentle heart soon apprehends,
Seized him for the fair person which was ta'en
From me, and me even yet the mode offends.
Love, who to none beloved to love again
Remits, seized me with wish to please, so strong,
That, as thou see'st, yet, yet it doth remain.
Love to one death conducted us along,
But Caina (2) waits for him our life who ended."
These were the accents uttered by her tongue.
Since I first listened to these Souls offended,
I bowed my visage, and so kept it till
'What think'st thou?' said the bard (3); when I unbended,
And recommenced: 'Alas! unto such ill
How many sweet thoughts, what strong ecstacies,
Led these their evil fortune to fulfill!'
And then I turned unto their side my eyes,
And said, 'Francesca, thy sad destinies
Have made me sorrow till the tears arise.
But tell me, in the Season of sweet sighs,
By what and how thy Love to Passion rose,
So as his dim desires to recognize?'
Then she to me: 'The greatest of all woes
Is to remind us of our happy days
In misery, and that thy teacher knows.
But if to learn our Passion's first root preys
Upon thy spirit with such Sympathy,
I will do even as he who weeps and says.
We read one day for pastime, seated nigh,
Of Lancilot, how Love enchained him too.
We were alone, quite unsuspiciously.
But oft our eyes met, and our Cheeks in hue
All o'er discoloured by that reading were;
But one point only wholly us o'erthrew;
When we read the long-sighed-for smile of her,
To be thus kissed by such devoted lover,
He, who from me can be divided ne'er,
Kissed my mouth, trembling in the act all over:
Accurséd was the book and he who wrote!
That day no further leaf we did uncover.'
While thus one Spirit told us of their lot,
The other wept, so that with Pity's thralls
I swooned, as if by Death I had been smote,
And fell down even as a dead body falls."
Lord Byron - 1820
1) Ravenna; 2) the site of Hell where killers of relatives are punished; 3) Virgil