You may wish to see an introductory page to this section or page one with overall images of the Ulu Cami (Great Mosque) of Divrigi first. 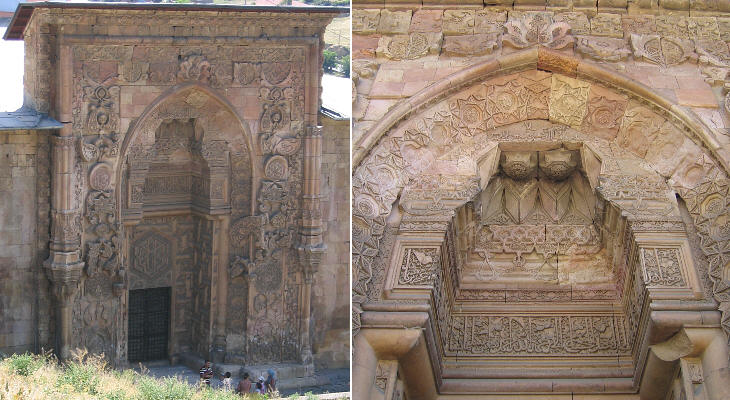 Ulu Cami: (left) northern portal; (right) its muqarna, a detail of which is shown in the image used as background for this page

The porch of the mesjid at Divriki is one of the most beautiful specimens of the florid Saracenic, perhaps, to be seen in Western Asia.
William F. Ainsworth - Travels and Researches in Asia Minor, Mesopotamia, Chaldea, and Armenia - 1842
The highly sophisticated technique of vault construction and a creative, exuberant type of decorative sculpture - particularly on the three doorways, in contrast to the unadorned walls of the interior - are the unique features of this masterpiece of Islamic architecture.
UNESCO: from the criteria supporting the inscription of the complex in the World Heritage List in 1985.
Hurrem, the architect of the Great Mosque of Divrigi came from the region of Lake Van; this was located at a crossroad of different cultures: to the north it bordered on Armenia where elaborate and deeply carved gravestones were developed between the IXth and the XIth century; Persia lay to its east; this meant influence of a culture which had exchanges with India; to the south there were some remnants of the Christian states founded after the First Crusade: here elements of Gothic architecture were introduced; finally Lake Van was close to the eastern border of the Seljuk sultanate. Hurrem built three gigantic portals; two for the mosque and one for the hospital; although the portals were designed by the same person and were built at the same time they show great differences. The northern portal is characterized by its great depth and by the unusual design of its muqarna, the system of projecting niches above the actual entrance. 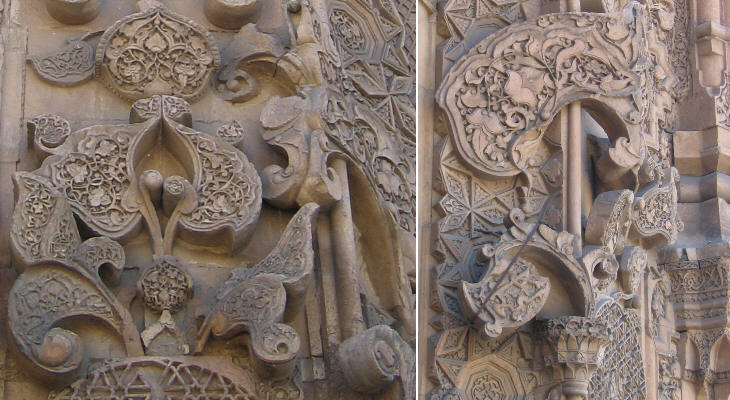 The variety of the carved decoration indicates that is was carried out by different groups of craftsmen. The main characteristic of the designs featured in the portals is their uniqueness: each is distinct from other decorations. There are no other examples of the three-dimensional and intricate geometric styles and flowing figures of plants. UNESCO
Floral motifs are common in Muslim art; they are usually associated with geometric motifs and calligraphy: the overall effect is very elaborate. In Divrigi floral motifs are an explosion of life; they are very detached from the background and actual plants seem to climb on the walls. Art historians have identified points in common with Indian monuments and even with the contemporary temples of Angkor. 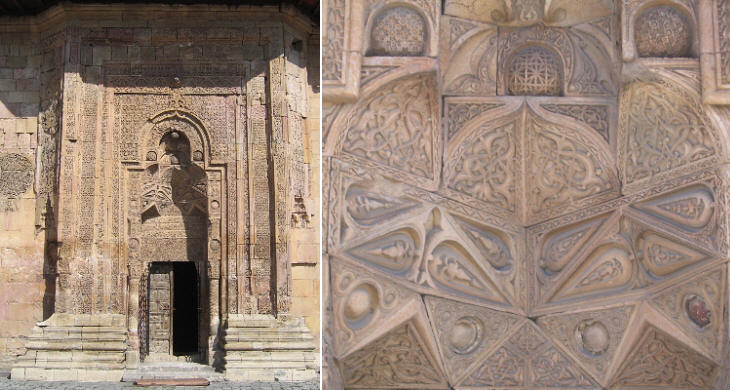 The western portal is less deep and at the same time it projects more from the wall than the northern one. Its muqarna is based on complex curved lines and is characterized by several spherical objects.

Ulu Cami: western portal: (left) details of the columns at the sides of the entrance; (right) dove and double-headed eagle on the outer part of the portal

Art historians attribute to Armenian influence the capitals and the design of the columns at the sides of the entrance. The representation of birds is linked to the male (eagle) and female (dove) concepts, but the double-headed eagle was also a symbol of the Sultanate of Rum; when the complex of Divrigi was built the Menguceks were vassals of that nation. The technique is very unusual because the birds are clearly detached from the background, but at the same the relief showing their details is very low. The adjoining hospital, the Darush-shifa, was founded by Ahmet Shah's wife Turan Melek. It is entered via a monumental, elaborately carved stone portal on the west. UNESCO
The high portal of the hospital is characterized by two pointed arches, one set within the other. This gives to the portal an almost Gothic aspect. It is known that astronomy was held in great esteem by Islam: this is confirmed by the representation of many stars above the entrance. 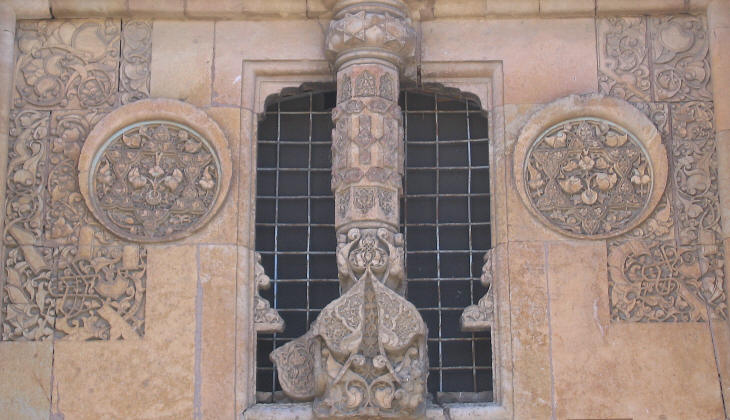 The encircled six pointed star is usually associated with Jewish identity. For Islam this star was associated with the number of days in which God created the Earth and it was regarded as an excellent shape. The Shield of David is not mentioned in antiquity nor is it found on ancient Jewish gravestones. It appears to be associated with Jewish culture from the middle of the XIVth century in Central Europe, so when the stars of the portals were designed they did not have any hidden reference to Jewish identity.

The floral motifs decorating the portal of the hospital are not as many as those of the northern portal, but they show the same vigour.

The mosque can be accessed through a third entrance: it was reserved to its founder and thus it is called the Shah Gate. It was built in 1241 and it strictly adheres to the canons of Seljuk architecture; this maybe because the other entrances were regarded as being somewhat heretical owing to their representation of actual flowers and animals.

Towards the Persian Gulf

The valley is wide and open, bounded to the north by the rounded but lofty summits of the Dumbugh Tagh, to the south by the Erumbat, to the west it rises gradually towards the snow-clad summits (in July) of the Yamur Tagh, while to the east it is shut up by lofty and rocky precipices. The valley is watered by a small stream, in the bed of which occur vast boulders of magnetic iron ore. This stream, joins immediately below the town, the Keumer Su, which, issuing from a narrow pass in the Dumbugh Tagh, enters the vale of Divriki, makes a curve to the south-west towards the town, and then loses itself in a dark inaccessible glen, bounded by giant precipices. Ainsworth
While Sivas, the capital of the province, is located in the basin of the Kizilirmak (Red River) which empties into the Black Sea, Divrigi is in a different basin. The river which flows near the old town finds its ways through a ridge until it reaches the western branch of the Euphrates River. This flows through steep canyons and gorges and then through the deserts of Syria and Iraq until it merges with the Tigris; the resulting river (Shatt-Al-Arab) empties into the Persian Gulf.

Return to page one or move to:
Introductory page
Konya
Karaman
Mut and Alahan
On the Way to Nigde
Nigde
Kayseri
Cappadocia
Sivas