- Cordoba after 1236
(left - Mosaic at Italica; right - decoration at the Alcazar of Seville)

You may wish to see two introductory pages to this section or pages on Roman or Moorish Cordoba or its Great Mosque first. 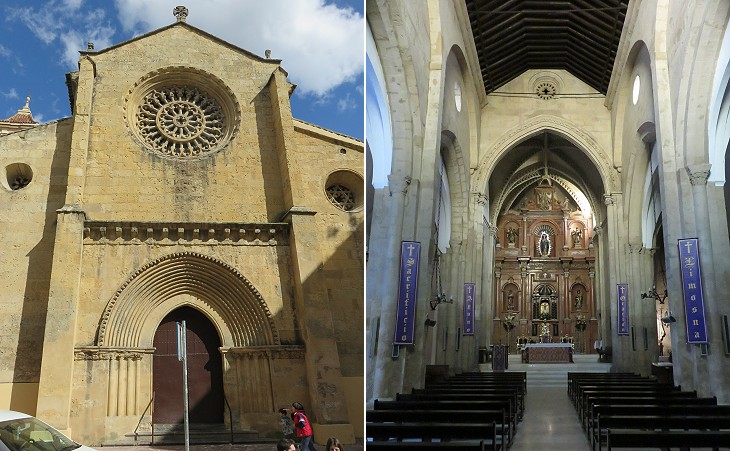 In 1236 King Saint Ferdinand III of Castile conquered Cordoba. He was canonized in 1671 for his support of the Christian cause. He promoted the construction of a number of parish churches in Cordoba, some of which were built on the site of previous mosques. Iglesia de San Miguel combines Romanesque and Gothic styles. Its high nave is in stark contrast with the lowness of the Great Mosque. The Muslim inhabitants of Cordoba did not have much time to admire the architectural features of the new churches, because after a revolt in 1264, they were expelled and they left the town for the Kingdom of Granada and Morocco. 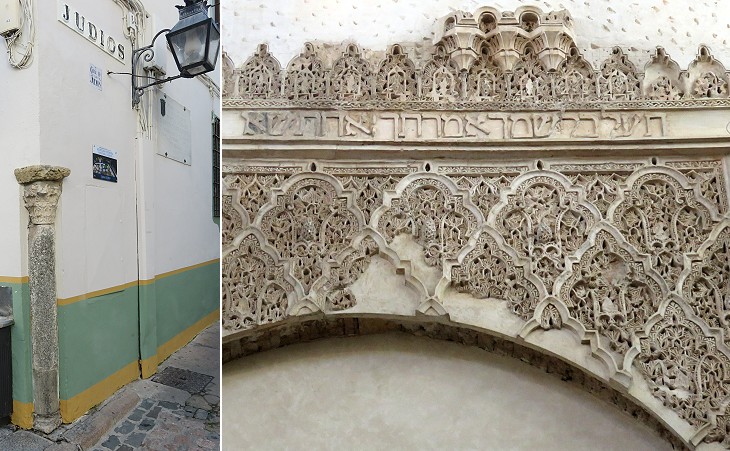 (left) Site of the Juderia, the Jewish quarter; (right) former synagogue: detail of its Moorish decoration

Muslim Cordoba housed a sizeable Jewish community who continued to live in the city after the Christian conquest and the expulsion of the Muslims. In 1315 a synagogue was refurbished by a wealthy benefactor. Its decoration is very similar, although simpler, to that of the palaces which the Nasrid rulers of Granada were building at that time. In 1391 a mob led by priests and noblemen assaulted the Jewish quarter and massacred its inhabitants or forced them to convert. Capilla de San Bartolomé (see some of its ancient columns)

A small church was built in ca 1399 in the former Jewish quarter. A few years later a funerary chapel was built there; it was decorated with tiles and stuccoes which again are very similar to those of the Nasrid palaces of Granada. The use of Moorish patterns in Christian monuments is known as mudéjar, although the term Mudéjar is used also to indicate the Muslims who lived in Christian Spain. 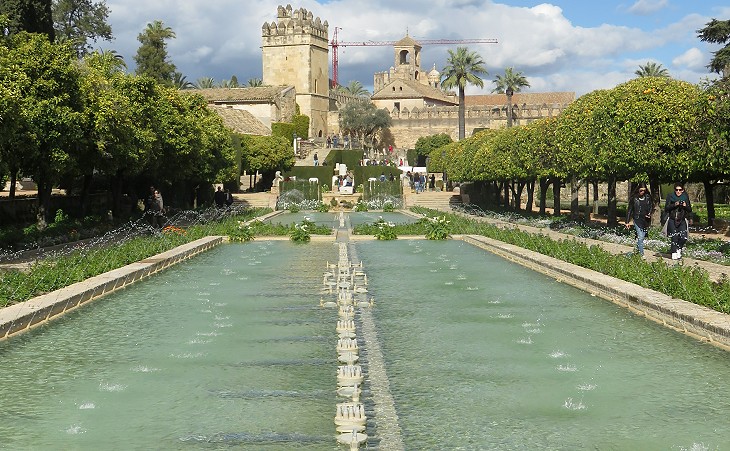 The Alcazar rises to the left and was built on the site of the Qalatt Rudheric, the Castle of Roderick, the last of the Goths, whose father, Theofred, was duke of Cordova; formerly it was the residence of the Inquisition, and then, as at Seville, that of miserable invalid soldiers. The lower portions were converted into stables by Juan de Minjares in 1584, for the royal stallions.
Richard Ford - A Handbook for Travellers in Spain - 1855
The palace was built in 1328 by King Alphonse XI of Castile, thus before the Real Alcazar of Seville which is the finest example of mudéjar art. It has suffered a lot from having been used for other purposes. 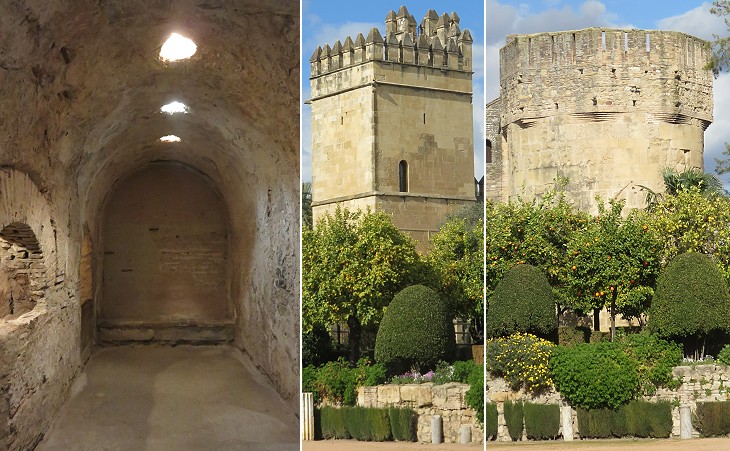 King Alphonse XI had baths built according to traditional Arab designs for his mistress Doña Leonor de Guzmán. The palace was rarely used by the kings, with the exception of Queen Isabel of Castile and her husband King Ferdinand of Aragon. They set their residence at Cordoba during the campaign for the conquest of Granada. They kept Boabdil prisoner in this palace before freeing him with the aim of weakening the Kingdom of Granada by fomenting a civil war.
In 1482 the palace was given to the Holy Office of the Inquisition. Between 1499 and 1504 over 200 people were sentenced to death. In December 1504 107 persons were burnt at the stake, accused of being false converted Jews.
Today the palace is open to the public; it houses some fine Roman mosaics, a beautiful sarcophagus and its ancient walls have been unearthed. 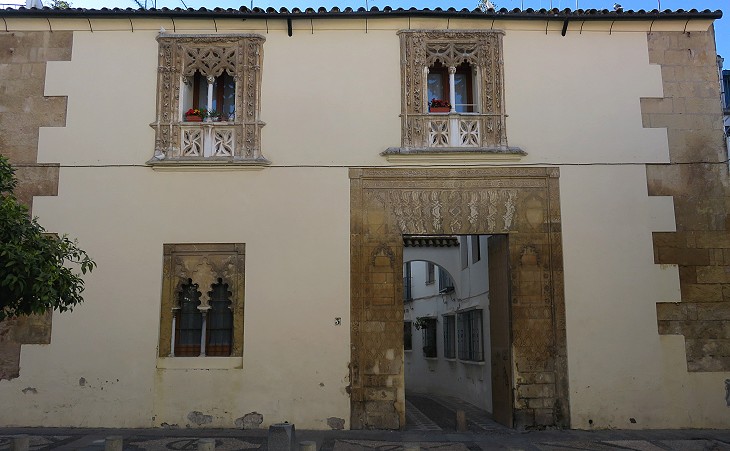 This city is the most agreeable of any in Spain for a place of residence: here are about thirty noble families, who alternately spend the evenings at each other's houses. (..) One of the four evenings I remained in Cordova was spent at the house of the Marchioness de Villaseca. (..) There was much more freedom among the company than I ever observed at any assembly in England, and none of that obstinate shyness and reserve, which are so disagreeably peculiar to the English nation in general.
Richard Twiss - Travels through Portugal and Spain, in 1772-1773
This house is named after one of its landlords who spent some years in the Indias, i.e. the Spanish colonies in the Americas, but it was built in the XVth century. The façade is the only original part of the building and it shows elements of both Gothic and mudéjar styles. The design of the portal is based on Fachada de Comares at Granada. 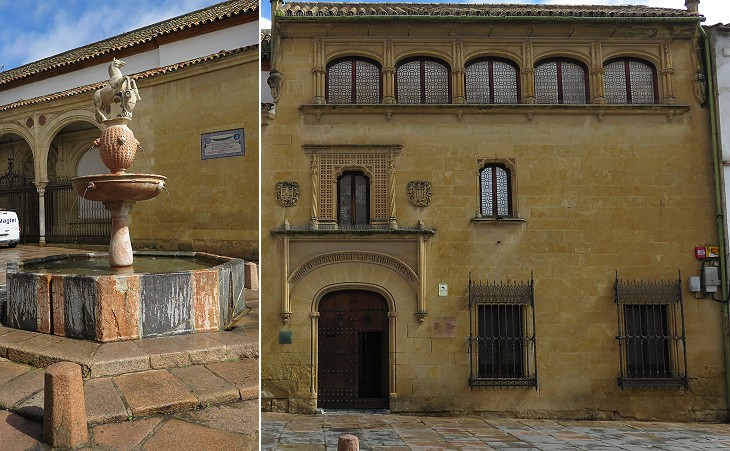 The ill-luck of the unfortunate Sancho so ordered it that among the company in the inn there were four woolcarders from Segovia, three needle-makers from the Colt of Cordova, and two lodgers from the Fair of Seville, lively fellows, tender-hearted, fond of a joke, and playful, who, almost as if instigated and moved by a common impulse, made up to Sancho and dismounted him from his ass, while one of them went in for the blanket of the host's bed; (..) they decided upon going out into the yard, which was bounded by the sky, and there, putting Sancho in the middle of the blanket, they began to raise him high, making sport with him as they would with a dog at Shrovetide.
Miguel de Cervantes Saavedra - Don Quixote of the Mancha - Chapter XVII - translation by John Ormsby
The Potro is nothing more than a large fountain with a paltry stone statue of a colt on the top; when Cervantes wrote his Romance, Seville was the mart of Europe, and all the neighbouring places under the benign influence of commerce, were much more frequented and better known than at present.
Henry Swinburne - Travels through Spain in the Years 1775 and 1776 in which several monuments of Roman and Moorish architecture are illustrated.
Seville, Cadiz and in general the whole of Andalusia and Extremadura benefitted from the new trading routes with the Spanish American colonies. 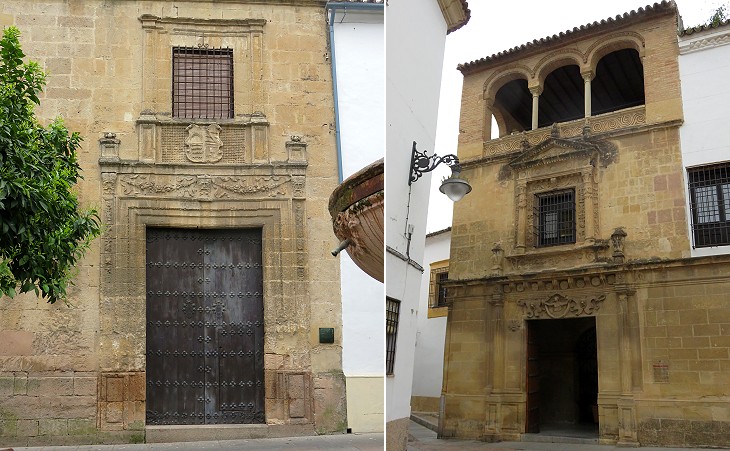 The streets are crooked and dirty; few of the public or private buildings conspicuous for their architecture. Swinburne
Contrary to Swinburne's opinion, Cordoba has some interesting XVIth century small palaces of the local nobility.
The city was repeopled by the pauper patricians of Rome; hence its epithet, Patricia; and pride of birth still is the boast of this poor city. La "cepa de Cordova" is the aristocratic "stock". The Great Captain, who was born near Cordova, used to say that "other towns might be better to live in, but none were better to be born in. Ford
The image used as background for this page shows a 1923 equestrian statue of Gonzalo de Cordoba, the Great Captain, by Mateo Inurria at Las Tendillas, a large modern square in the old town. 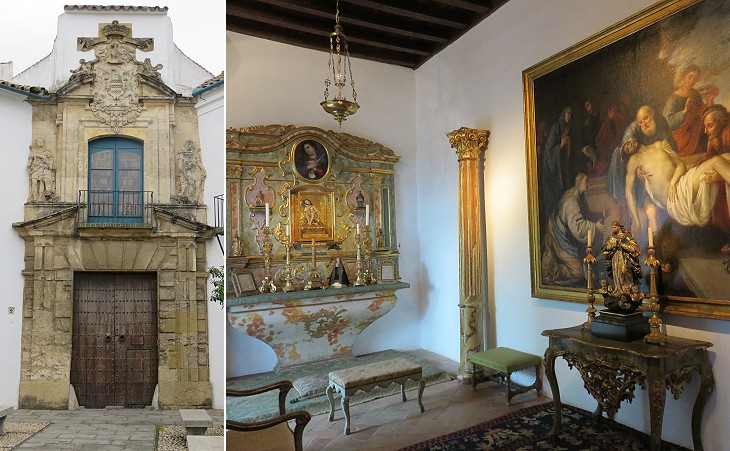 The construction of the palace began in the XIVth century, but it was repeatedly modified. The portal has a gigantic coat of arms flanked by two statues. It seems a work of the XVIIth century, but the coat of arms (which is surrounded by the collar of the Order of the Golden Fleece) is of the Saavedra family who acquired the building in 1873. It has twelve patios, but they are mainly of the XIXth and XXth centuries. It houses an eclectic collection of exhibits which includes some ancient Roman pieces. 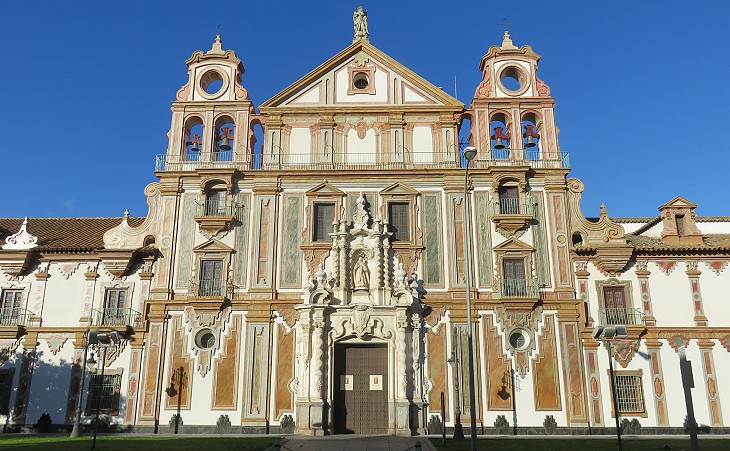 Formerly there were 35 convents, besides 13 parish churches, in this priest-ridden city; most of these are overloaded with barbaric churrigueresque (a style named after José Benito de Churriguera (1665-1725) a Spanish architect, and characterized by an elaborate decoration) and gilding. Ford
In the XVIIIth century the towns of the Kingdom of Spain competed with those of the Papal State for having the highest ratio of churches to population.

In a square, near the end of the bridge, is a gilt statue of the angel Raphael, perched on the top of a high marble column. Twiss
Near the bridge is "El Triunfo" a triumph of superstition and churriguerism, which was erected by the Bishop Martin de Barcia. On the top is the Cordovese tutelar saint, Rafael, who clearly is unconnected with his namesake of Urbino. Ford
The monument was designed by Italian priests; they most likely had in mind Fontana dei Quattro Fiumi, but the outcome of their work does not have the grace of Gian Lorenzo Bernini's masterpiece. 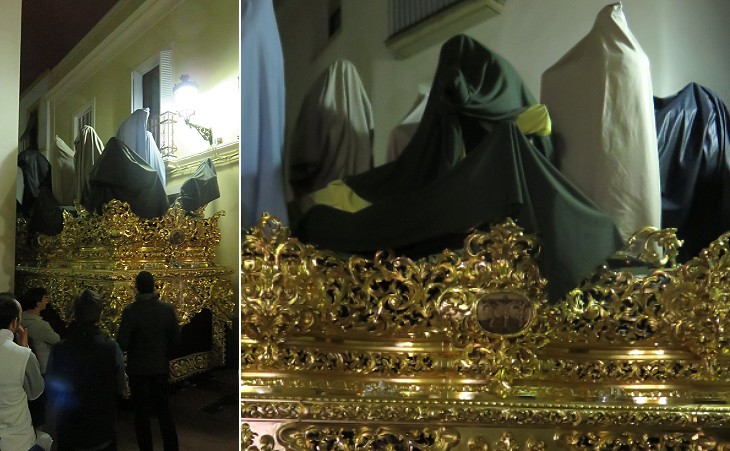 Preparations for the Holy Week: a "paso", a set of images set atop a moveable float of wood, is carried to Iglesia de San Miguel

In regard to the few levities upon the subject of superstition, I have not endeavoured to ridicule the persons believing, but the objects of their belief - for we cannot with reason condemn mankind for differing in their opinions: we all seek for truth, but God only knows who has found it. Twiss
In 2016 the Great Mosque/Cathedral of Cordoba was visited by 1,800.000 people. This figure gives an idea of how packed Cordoba can be, especially during Semana Santa, the Holy Week, which has become a major attraction for (mainly secular) tourists together with that at Seville. 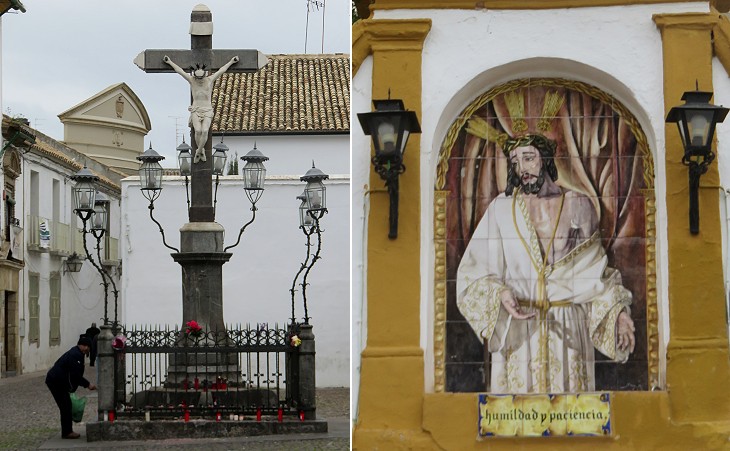 In order to gain an insight on the importance the Catholic religion had in Spain until the early 1970s, one must wander in some old neighbourhoods in the northern part of the town, far from the Great Mosque and the other "must see" of Cordoba. 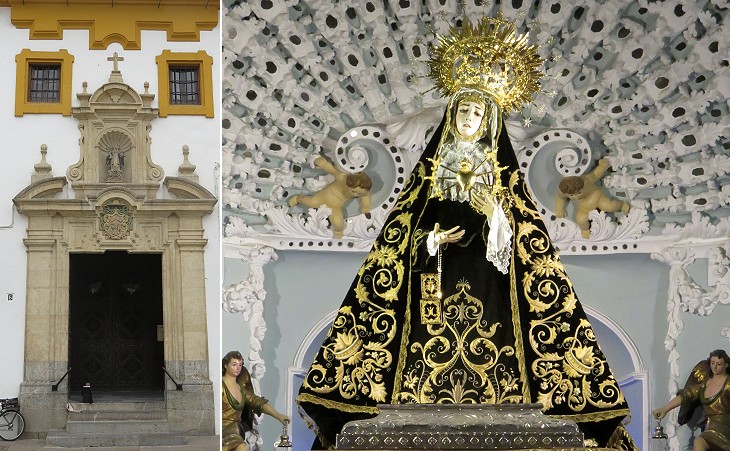