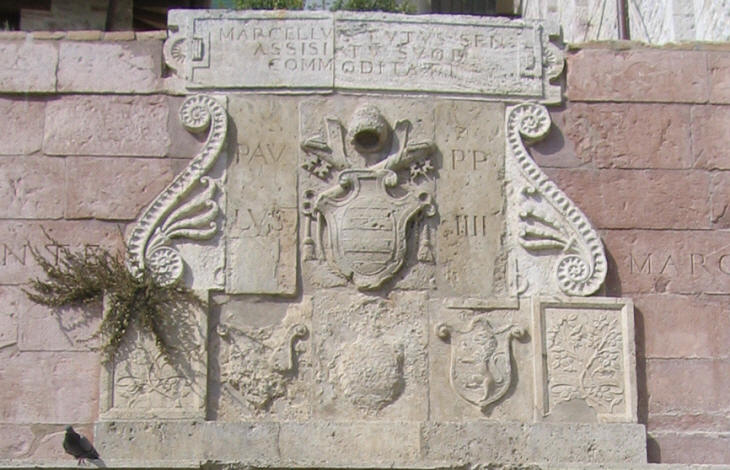 Damnatio memoriae was a sanction of the Roman Senate by which all references to a person were removed; it was formally applied to Emperor Domitian, but also references to Emperors Nero, Commodus and Geta were removed or erased. This in practical terms occurred also to all the coats of arms of Pope Paul IV which were destroyed by the Romans after the Pope's death; only Fonte Marcella in Assisi retains a coat of arms of this Pope. 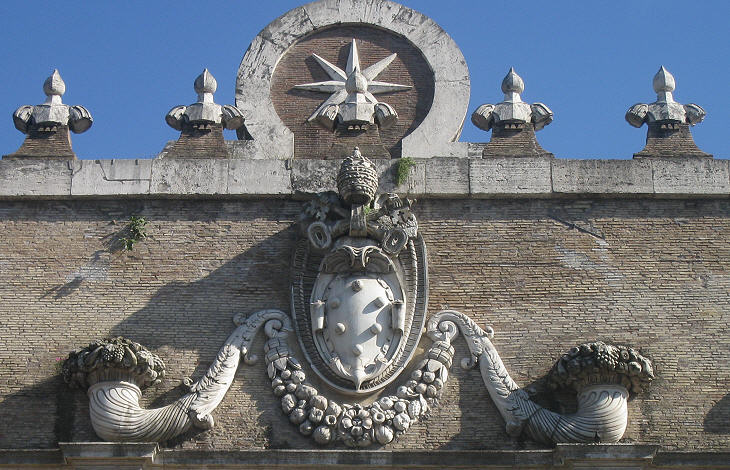 Cardinal Giovan Angelo de' Medici was not a member of the famous Florentine family, but he was allowed by Cosimo, Duke of Florence, to utilize the family coat of arms after he was elected pope (Pius IV) in 1559. The Pope often added Mediolanensis (from Milan) to his name to indicate he did not belong to the Florentine family; he greatly strengthened the fortifications of Rome and he placed his coats of arms on four gates: Porta del Popolo (by Nanni di Baccio Bigio, perhaps with advice from Michelangelo), Porta Pia (personally designed by Michelangelo; see the etching by Filippo Juvarra), Porta Pertusa and Porta Angelica.
The cornucopias at the side of the Pope's coat of arms at Porta del Popolo show that elegant, but somewhat excessive decoration, which characterized the art of the second half of the XVIth century in Italy and which is known as Mannerism. 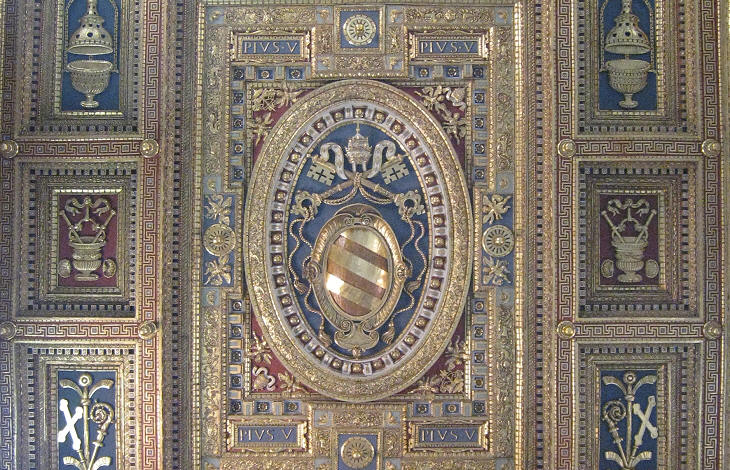 Coat of arms of Pope Pius V in S. Giovanni in Laterano

Mannerism characterized also the ceiling of S. Giovanni in Laterano where a coat of arms of Pope Pius V was placed at the centre of a very elaborate decorative scheme, which is particularly remarkable for the use of so many different colours (you may wish to see a page on the ceilings of Rome). Heraldic symbol in the 1723 monument to Pope Gregory XIII in S. Pietro by Camillo Rusconi

While the geometric design of Pope Pius V's coat of arms left little room for artistic interpretation, the dragon of Pope Gregory XIII offered great opportunities for the decoration of fountains and buildings; the fountains in Piazza del Popolo (now in Piazza Nicosia), in Piazza della Rotonda and Fontana del Moro in Piazza Navona all had spouts having the shape of a dragon; later modifications by other popes have lessened the visibility of the dragons, but not in Civita Castellana; dragons decorate the entrances to Collegio Romano and the courtyard of Palazzo della Sapienza. For more extensive coverage of the coats of arms of this pope see a page devoted to his dragon. 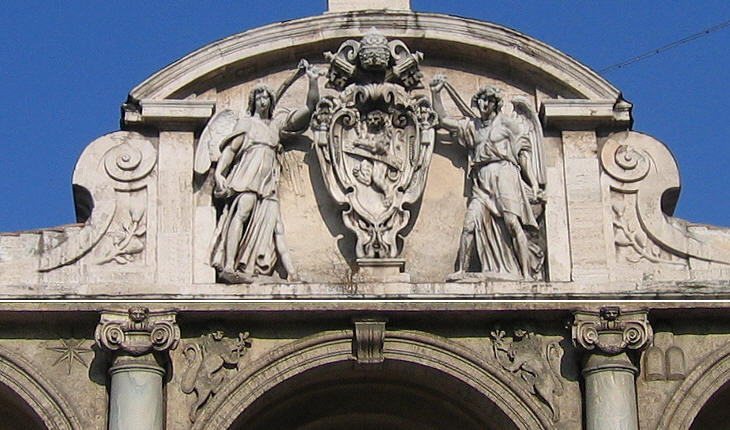 (above) Coat of arms of Pope Sixtus V in Mostra dell'Acqua Felice (you can see it also in an etching by Filippo Juvarra); (below) heraldic symbols: three mountains, a star and a lion holding some pears

Pope Sixtus V was of very humble origins; when he rose through the ecclesiastic hierarchy he compensated for his not belonging to a noble family by having a coat of arms full of heraldic symbols, which when he became pope he placed on many monuments and palaces; in particular he placed two of them (three mountains and a star on top of them) on the obelisks which he erected in Piazza del Popolo, Piazza S. Pietro and behind S. Maria Maggiore.
For more extensive coverage of the coats of arms of this pope see Lions and Pears, a page dealing with the unusual association between a lion and some pears; while the former was a symbol of the Pope himself, the latter were a reference to Peretti, his surname (It. pera means pear). Some popes had no scruples in replacing the coats of arms of their predecessors with their own even when they had made just minor improvements to the monument built by a previous pope; probably because he was aware of this risk Pope Clement VIII decorated with his heraldic symbols the cornice of the palaces he built or restored and he did the same on small columns and globes; it was a very wise decision because his family was extinct by the early XVIIth century; the Aldobrandini possessions were acquired by the Borghese and the Pamphilj who placed their own heraldic symbols on them, but the decorative bands with Pope Clement's stars and stripes were not affected.

You can see a directory listing the main monuments built in Rome during this period.


The image used as background for this page shows a detail of Porta del Popolo.