- Bordeaux: Museum of Aquitaine
(heads of Ambiorix at Tongeren and of Julius Caesar at Arles)

You may wish to see an introductory page to this section or a page on Burdigala (Roman Bordeaux) first. 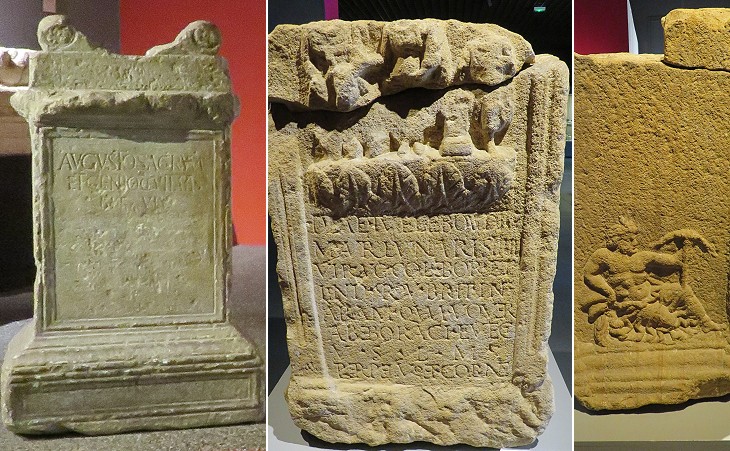 (left) Altar to Emperor Augustus and to "Genio Civitatis", the Guardian Genius of the town; (centre) altar to Tutela Boudiga; (right) relief on the side of the altar which most likely depicts the River Garonne; the town owed much of its prosperity to trade along the river with "Tolosa Tectosagum" (Toulouse)

The altar to Augustus was found in 1534 and it immediately attracted the attention of local antiquarians and historians because it bore the first known inscription which mentioned BIT(VRICVM) VIV(ISCORVM), the Bituriges Vivisques, the Gallic nation mentioned by Caesar. It most likely stood in the Forum and it was used for ceremonies celebrating the loyalty of the town to Rome and its emperor. Because of its importance it was placed in the Town Hall and in 1781 it was moved to the first archaeological museum of Bordeaux.
Tutela is a Latin word meaning care/protection and in a votive altar (of York stone) erected in 237 AD by Marcus Aurelius Lunaris it was associated with Boudiga, a Gallic/Celtic goddess whose name brings to mind Boudicca, Queen of the Icenii who led a revolt against the Romans in Britain. It was found in 1921 in the walls of the town and it is of particular interest as it testifies to the relations between Aquitaine and Britain (casts of it are on display at the British Museum and at Lincoln). Lunaris was a sevir Augustalis of Eboracum (York) and Lindum (Lincoln), i.e. a member of a college of six men in charge of the ceremonies in honour of the imperial family. Sevires were often former slaves or veterans who had acquired a high social status; a Lunaris veteran is recorded in an altar found near Hadrian's Wall. The name is not typical of Rome, so it is possible that Lunaris was of Gallic or British descent. 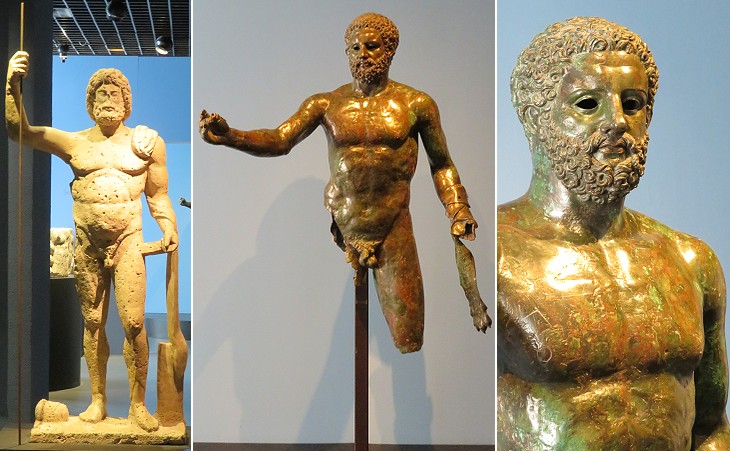 (left) Statue of Jupiter from a shrine outside Bordeaux (Ist century AD); (centre/right) copper alloy statue of Hercules (late IInd century) found broken into twenty pieces in 1832 in the centre of the town

Burdigala, unlike Lugdunum Convenarum (Saint-Bertrand-de-Comminges) or Narbo Martius (Narbonne) did not have the status of a Roman municipium. Its free citizens were peregrini (foreigners)* and yet all evidence indicates that it was rapidly Romanized; Strabo in the early Ist century AD already described it as an emporium, an important trading centre, built on the left bank of the river and surrounded by marshes. The large statues of traditional gods which were found in town or in its environs were designed according to classical patterns and do not show additions/modifications reflecting local cults which can be noticed in smaller statues/reliefs of the museum.
(*) The rarely used Italian adjective peregrino means unusual, bizarre. 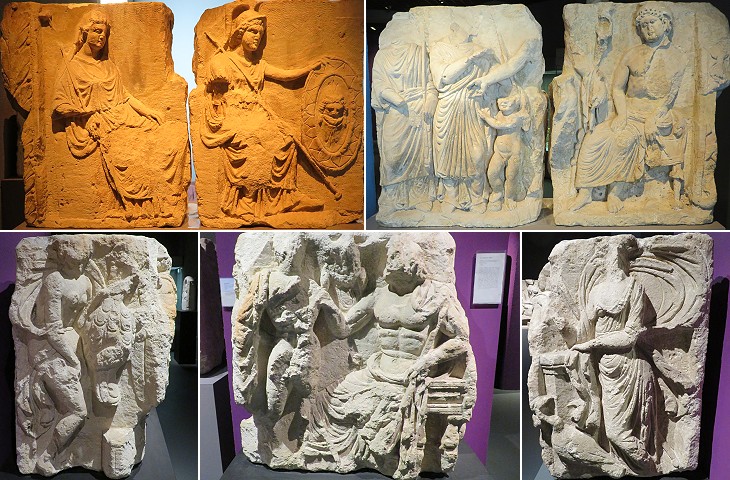 Reliefs with the Judgement of Paris (above) and the Loves of Zeus (below): (left) Leda; (centre) Ganymede; (right) Juno and Argo as a peacock

Pliny the Elder reports that wine was produced at Biturica, by this meaning Burdigala. Viticulture was subject to state authorization and the Romans tended to restrict it in order to favour the wines of the Italian peninsula. Its being permitted marked an important step in the development of the town which attracted a variety of economic actors in the wine business. They came from the Mediterranean provinces of the Empire and they contributed to the Romanization of the town; Greek mythological tales became popular, maybe through the Latin poems by Ovid. 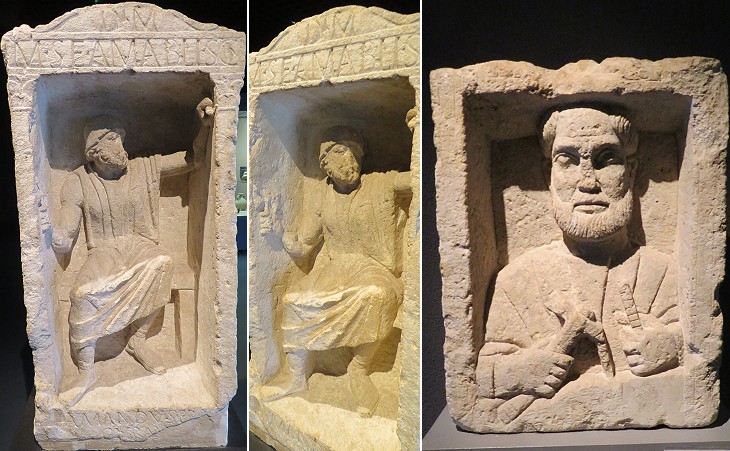 Some of the statues and reliefs which were found at Bordeaux came from Mediterranean countries, but others were made locally. While Pliny the Elder has provided us with long lists of Greek sculptors, it is rare to find records of those who contributed to the embellishment of the provincial towns. A tombstone at Bordeaux portrays sculptor Amabilis at work; it was most likely made by himself and the brother mentioned in the inscription was only involved in placing it in a necropolis. He wears a Gallic tunic and is hitting a chisel with a mallet in a rather dynamic gesture. Apparently he is finishing a capital of his tombstone, maybe today we would call him a stone-cutter, rather than a sculptor. 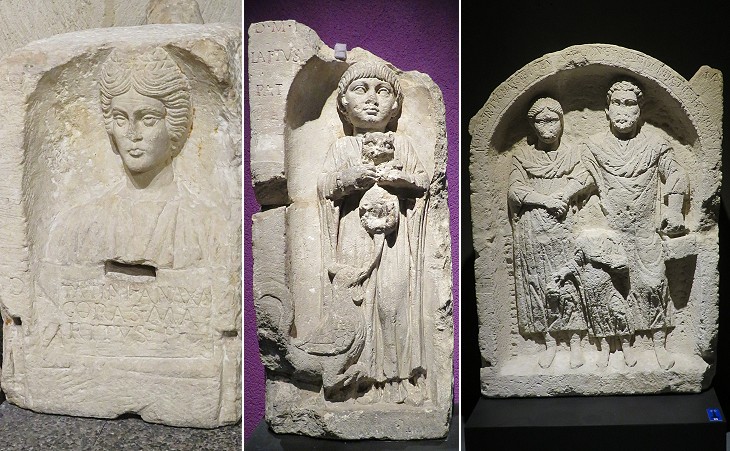 Tombstones of a wife, a daughter and a couple with a daughter

According to Roman law, the pater familias possessed an enormous power within the family, including that of life and death. The tombstones found at Bordeaux, and in general throughout the whole empire, depict a different picture in which family members are united by bonds of affection. The husband wants to remember his beloved wife in her most elaborate hairstyle, the parents portray their young daughter in her finest moments of joy and the couple is shown while re-enacting their wedding ceremony behind their deceased daughter. It is something similar to the modern practice of insetting a photograph of the deceased in a frame on a gravestone which is pretty common in many parts of Europe. Overall the tombstones depict an industrious middle class, not particularly interested in afterlife, because the great majority of the inscriptions have only a cursory reference to D. M. (Diis Manibus) (for the ghost-gods) and the reliefs do not show the patera, the offering to gain access to the Underworld or symbols of eternal life. 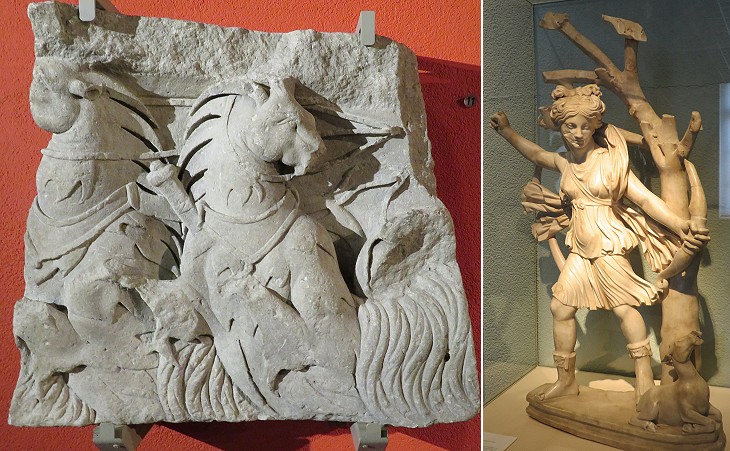 In general the reliefs which decorated the monuments of Burdigala were well executed and some of them were not mere repetitions of known works of art. The fragment portraying the Chariot of Neptune strikes for its frontal view of the sea horses. In the Vth century it was re-employed in the dyke of a small stream which crossed the town. It probably decorated a nymphaeum, a monumental fountain.
The small statue of Diana was a luxury object which decorated a Roman villa in the environs of the town. It was most likely imported and it demonstrates that the upper class continued to be fascinated by the traditional religion, although its gods were no longer worshipped. In ca 371 Ausonius, a poet and professor from Burdigala, wrote that the Mosel valley resembled a picture of my own native land, the smiling and well-tended country of Bordeaux, the roofs of country-houses, perched high upon the over-hanging river-banks, the hill-sides green with vines. (translation by Hugh G. Evelyn White). The passage indicates that Aquitaine was still enjoying some prosperity and security; Burdigala was known for the very good Latin which was spoken by its inhabitants.
The image used as background for this page depicts a relief of a theatrical mask. 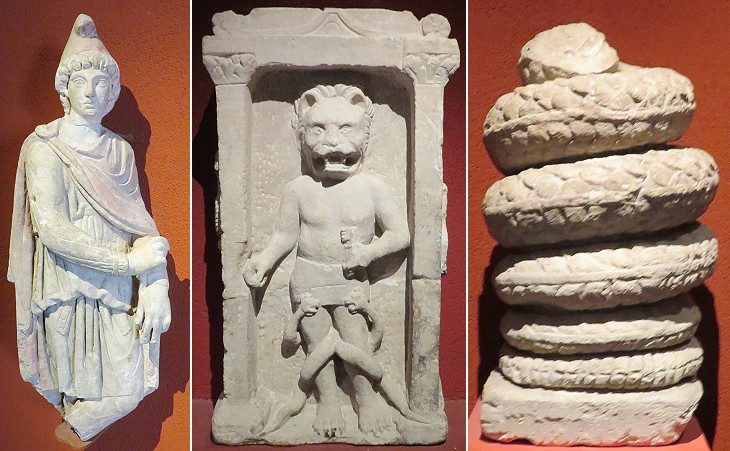 Worship of Mithra: (left) Cautopates holding a burning torch pointed down (found in 1986 in the centre of the town), a symbol of the setting sun or of death; (centre) relief of Leontocephalus; (right) coils of a snake, another Mithraic symbol indicating the passing of time

Archaeologists of the past, when excavating a Roman town, always looked for baths, amphitheatres and aqueducts, because all Roman towns were expected to have these facilities. Today they also search for one or more mithraea, because the small underground halls where the initiates of Mithra gathered for their ceremonies have been discovered in many parts of the Empire, chiefly in its western part, although the cult originated in the eastern one. This religion was particularly popular with the legionaries, especially those on the Rhine border. You may wish to see Mitreo di S. Prisca, one of the most interesting mithraea of Rome. 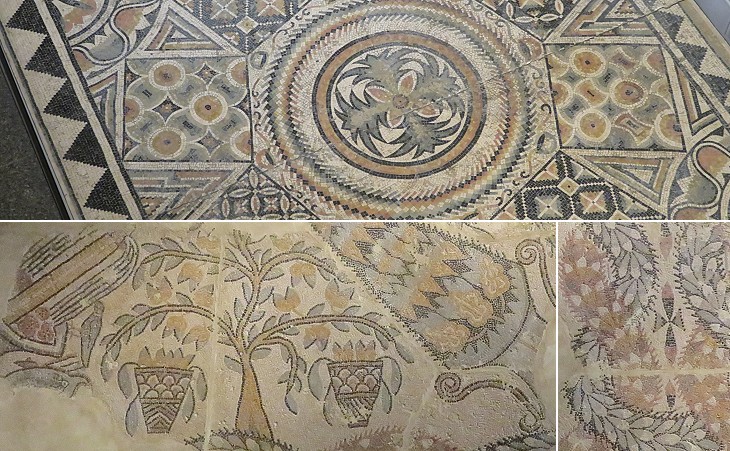 Floor mosaics found in town: (above) in 1877; (below) in 1963 and known as Garden of Paradise with some details (trees, birds) which bring to mind Christian mosaics at Aquileia

The floor mosaics found at Bordeaux are characterized by a prevalence of blueish-grey colours while those found at the Roman villa of Montcaret, near Saint-Emilion, a red wine district west of the town, show a greater use of yellow and red pieces which are more common throughout the Roman Empire (see the mosaics at Villa La Olmeda in Spain and at St. Albans). 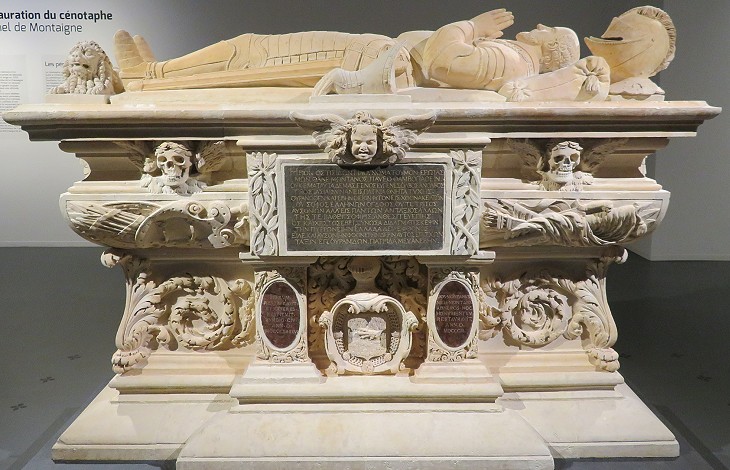 In the Chapelle of the College, a bold Gothic structure, is the monument of Montaigne, the essayist, a native of Montaigne St Michel in Perigord, who was mayor of Bordeaux in 1553. He is represented in full armour according to the custom of the period, laid on his back with his hands joined in prayer. The statue is a well executed work of the 16th century. Murray
The monument is a gisant and is typical of French sculpture, but the highly decorated basement with references to Death reflects the influence of Roman patterns, as Montaigne extensively travelled in Italy.