Advancing to the eastward we next came to two considerable rivers, the ancient Cestrus and Eurymedon. The former is 300, and the latter 420 feet wide; and from 12 to 15 feet deep inside the curved bars which extend across their mouths. (..) They are so shallow as to be impassable to boats that draw more than one foot of water. The condition of these rivers appears to have undergone a prodigious change: (..) we are told that Cimon destroyed the Persian fleet a long way up the Eurymedon (in 466 BC); and 280 years subsequent to that event, the Rhodian fleet that defeated Hannibal in the memorable sea-fight off Side, put into this river with thirty-two quadriremes and four triremes. (..) We proceeded a short distance up each of those rivers in the boats, in order to learn their modern names from some shepherds who were seen near the banks; but they were so much alarmed, that all our endeavours to entice them to an intercourse failed. Could we have ascertained from them, that much of the ruins of Perga and Aspendus were still in existence, and that there were no obstacles to the navigation, I should have been induced to row up to those cities.
Francis Beaufort - A description of the South Coast of Asia Minor, and of the Remains of Antiquity - 1817 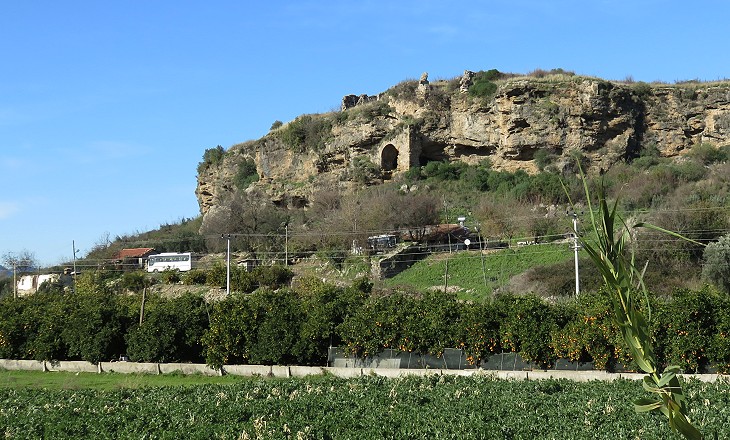 April 9th - This morning at an early hour I mounted the cliff overhanging the modern village of Bolcascooe, where I had slept, to examine the extensive and heavy-looking ruins which broke the horizon when I arrived by moonlight yesterday evening. I found them extending over the whole crown of the hill, and partially down its sides (..). Arch rising above arch, niche above niche, and column supporting column, plainly indicate the influence of the Romans. On the summit of the hill are many ruins of unhewn stone, massed together with cement, the arches being of brick, and the interior walls coated with stucco. (..) In the situation of this town the maps place Pednelissus.
Charles Fellows - Journal Written during an Excursion in Asia Minor in 1838
Charles Fellows, one of the first western travellers to visit Aspendos, initially mistook its monuments for those of Pednelissus, another ancient town, which was known to have existed because of coins found bearing its name. The exact location of Pednelissus is yet to be identified. 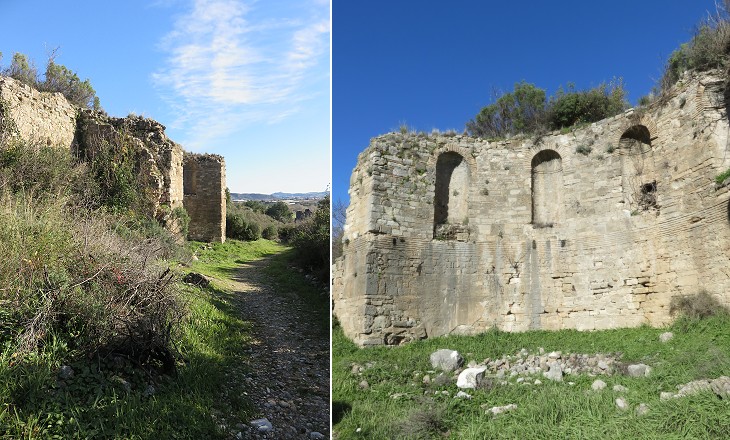 (left) Walls supporting the agora; (right) exedra on the western street leading to the agora

In the Iliad, Homer mentions two Eurymedon who tended the horses of Nestor and of Agamennon. It is an indication that horses were bred in the valley of the River Eurymedon in ancient times. They were a major source of income for Aspendos. Archaeological evidence indicates that the town flourished in the IIIrd and IInd centuries BC. Its remaining monuments however are dated IInd century AD, a period of great wealth in most of the provinces of the Roman Empire. 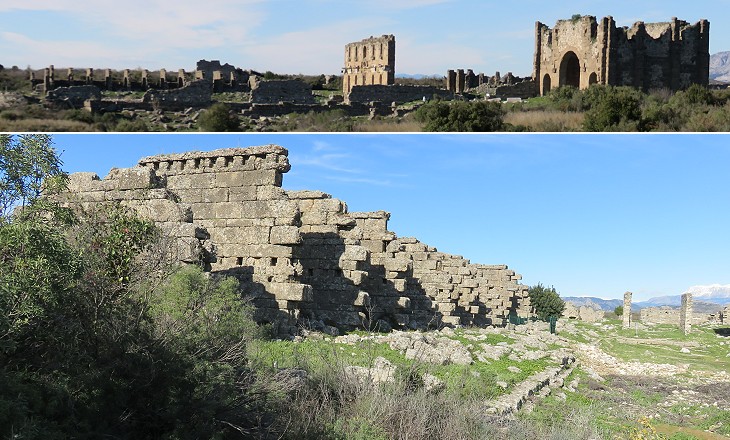 (above) Overall view of the agora terrace; (below) row of shops at the northern end of the agora

A kind of stadium forms a leading feature upon this Acropolis, more particularly from its having an immensely high screen or square wall at the end, which has been ornamented in front with a rich projecting marble cornice. Fellows.
Fellows mistook the long agora and the nymphaeum at its end for a stadium or a circus. He perhaps believed the row of shops to have been the carceres (cages) from which chariots started the race. In the IInd century AD the shape of the hill was modified in order to obtain a very large terrace. We can assume that the Roman monuments in the agora were to some extent replacements/enlargements of buildings/facilities of the IIIrd century BC and that the centre of the town was always located where we see it now, although not on such a large terrace. 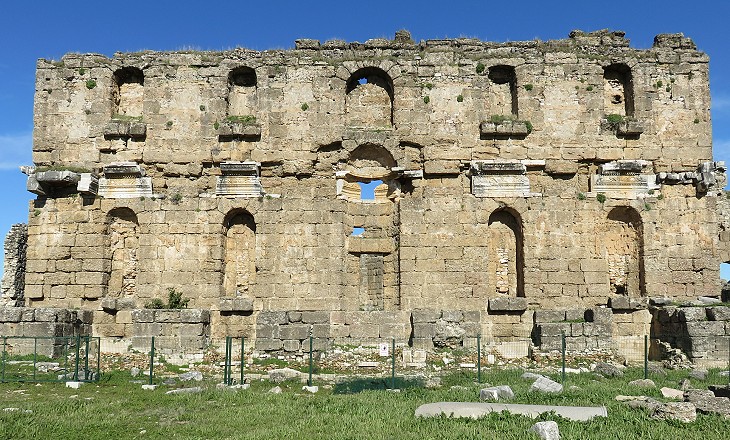 One side of the agora was entirely occupied by a gigantic fountain. It is similar to that at Side and to fountains recently discovered and reconstructed at Sagalassos, not far from Aspendos. In general these facilities are dated between the reign of Emperor Hadrian (117-138) and that of Emperor Septimius Severus (193-211). The niches housed statues of deities or emperors (with their wives) or of wealthy citizens who had financed the construction of the fountain. 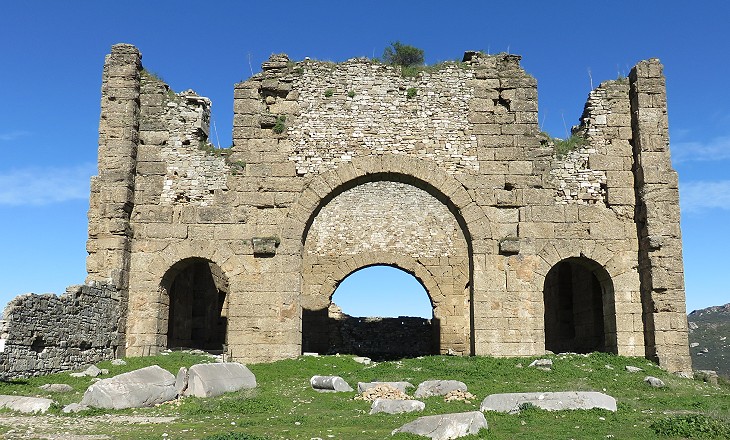 Eastern side of the Basilica

A very large basilica housed tribunals, halls for public ceremonies and halls where tradesmen and politicians met. Only its eastern section survived to the present day. It was most likely used as a fortification when the population of the town shrank and Aspendos became subject to raids by the Arabs. The last recorded Bishop of Aspendos attended the Second Council of Nicaea in 787. 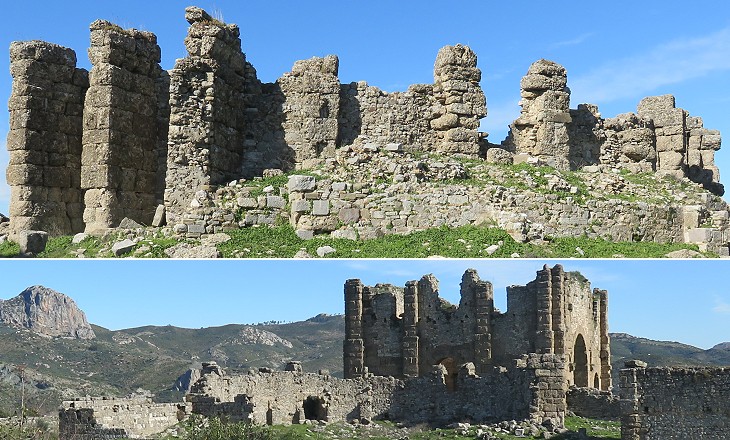 Bouleuterion: (above) outer side; (below) inner side

The city council met in a bouleuterion, a semi-circular building with rows of seats very near the agora. That at Aspendos might also have been used as an odeon, a small covered theatre for poetry and music. Usually an odeon is larger than a bouleuterion. The odeon built by Herodes Atticus in Athens could house an audience of 5,000. You may wish to see the reconstructed Odeon of Amman, which is the same size of that of Aspendos. 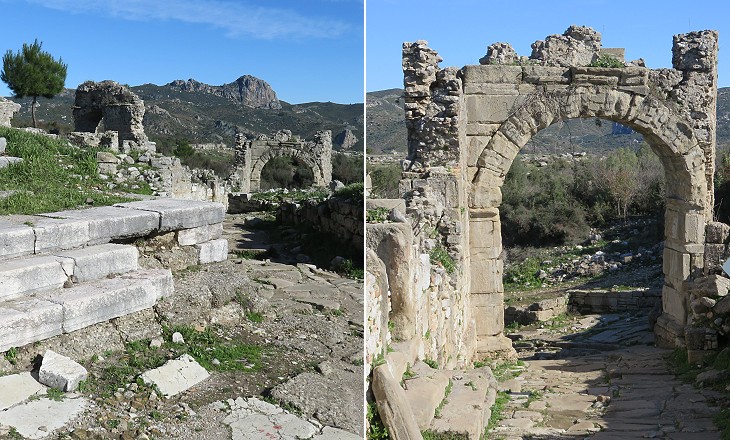 A ceremonial arch was built over one of the three streets leading to the upper town. It was perhaps dedicated to Emperor Hadrian, who visited most towns of the region. It appears that the section of the street near the arch housed some statues of local citizens, similar to those which stood along the main street of Phaselis. Archaeologists have found a limited number of statues, reliefs and in general marbles in the upper town of Aspendos, unlike what has occurred at nearby Perge. 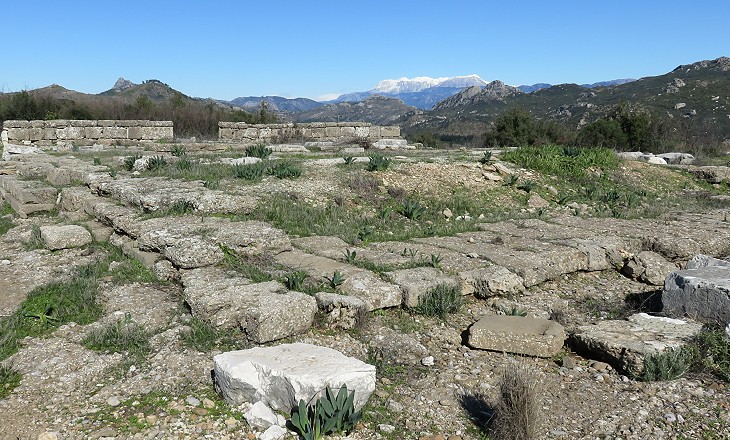 The remains of a temple have been found on the highest point of the hill at its north-eastern end. It enjoyed a commanding view and it was most likely one of the oldest buildings of the town. It consisted of a temenos, a sacred area marked by a wall and of a small cella (inner chamber) which was surrounded by Doric columns on all four sides. 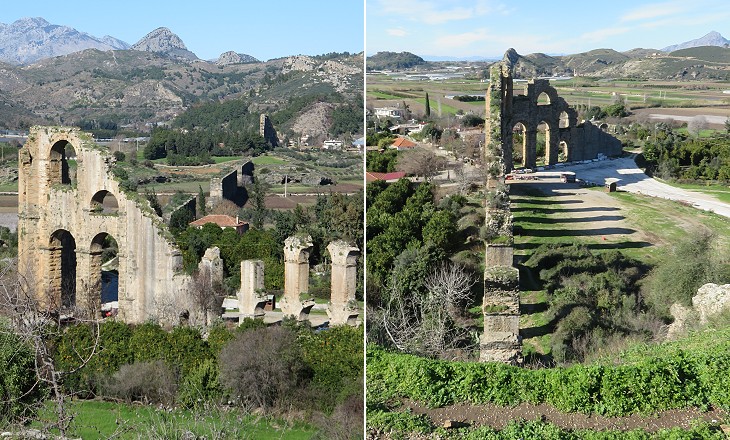 Views of the aqueduct

The remains of an aqueduct several stories high show whence the city derived its water. Fellows
Water was supplied to the city from two sources in the mountains, approximately 10 miles to the north of Aspendos. The water supply system consisted of a canal, bridges and tunnels. The last stretch of the aqueduct crossed a valley and a system of siphons inside high towers pushed the water to the top of the hill into a series of cisterns. 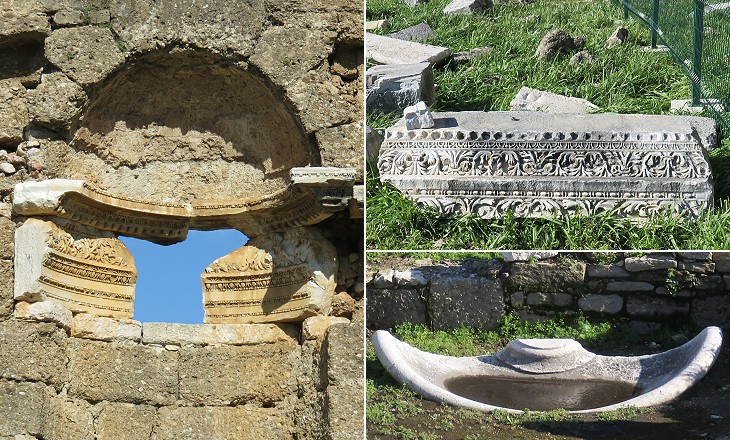 (left) Central niche of the fountain; (right-above) a decorated lintel in the agora; (right-below) fragment of a basin inside small baths near the bouleuterion

The image used as background for this page shows another detail of the decoration of the nymphaeum.

Move to page two and visit the theatre for which Aspendos is renowned.