- Apamea - Other Monuments
(a section of the Colonnade)

You may wish to see the Colonnade of Apamea first. 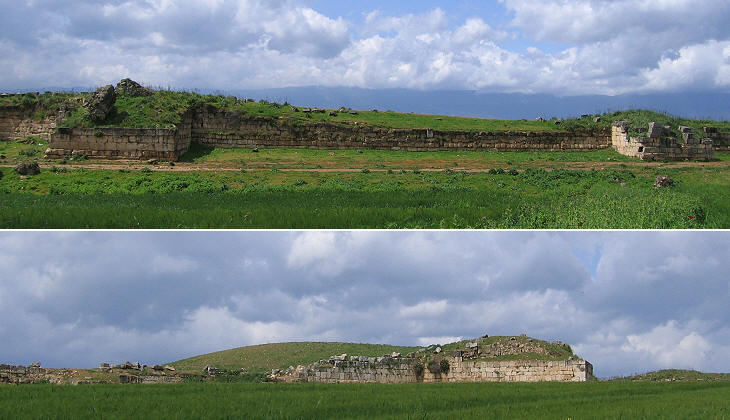 Views of the eastern walls

The city of Apamea was protected by a 4 mile long wall which included the acropolis. The walls were built at the time of the Seleucid Empire, but they were modified several times; there is indication that they were strengthened in the early IIIrd century AD and yet in 252 the Sassanids managed to shortly occupy Apamea. The walls protecting the northern part of Apamea were rebuilt by Emperor Justinian after two earthquakes in 526 and 528. Today the ancient walls are mainly visible in the north-eastern sector of the town. 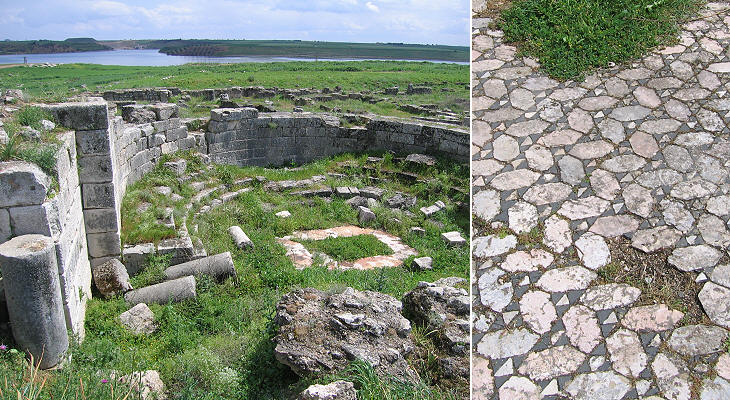 Eastern Cathedral: (left) apse; (right) detail of an "opus sectile" (marble inlays, see those at Villa Adriana) floor; see some of its mosaics in Brussels

In the late IVth century Apamea became the see of an important bishopric; a shrine was built to house a most precious relic: the True Cross. After the earthquakes of the VIth century a new complex of Christian buildings including a cathedral replaced the shrine.
In 392 Emperor Theodosius declared the Christian faith the sole religion of the Roman Empire in the belief that this decision would have brought unity and strengthened the empire; theological rifts however caused such animosities among the followers of different doctrines, that the Arabs were almost welcomed when they conquered Apamea and the whole of Syria after the 636 Battle of Yarmouk. 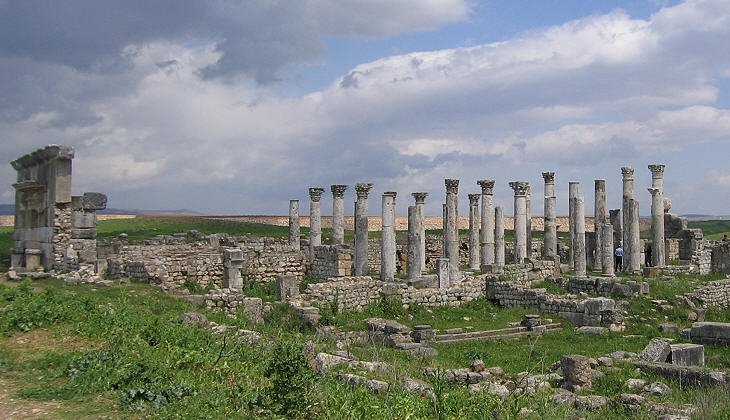 House of Consoles near the Eastern Cathedral

The Arab conquest brought to an end the history of ancient Apamea, which lost its strategic importance and its religious power of attraction. Byzantines, Crusaders and the Emirs of Aleppo continued to fight for control of the citadel, whereas the city at its feet was gradually abandoned. Archaeologists however have found evidence that a fine patrician house near the Eastern Cathedral was inhabited until the Xth century. Most likely two strong earthquakes in 1157 and 1170 were key factors in convincing the remaining population to quit Apamea. 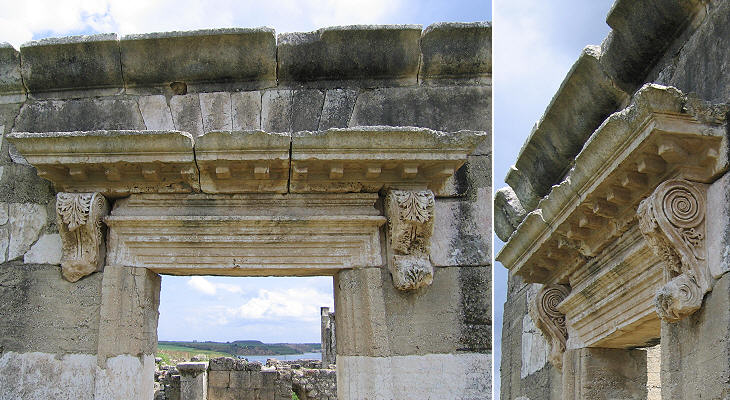 House of Consoles: details of the main entrance

The most interesting patrician house which has been reconstructed owes its name to the consoles which supported a flat roof; similar to traditional Roman houses it was structured around a peristyle, a porch surrounding a courtyard (see a page dealing with the houses of Pompeii). 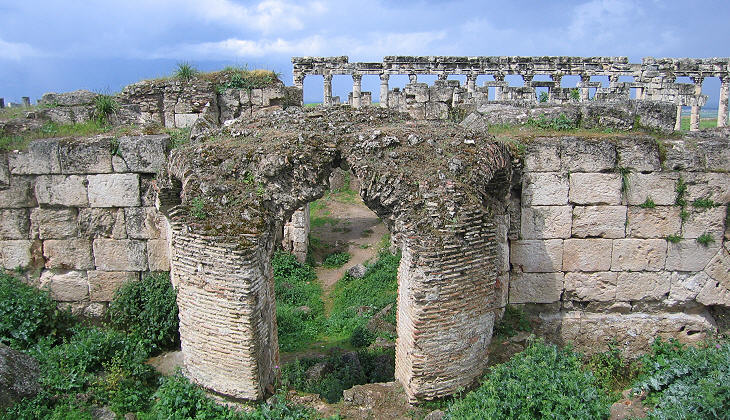 The remains of large baths have been found between the colonnade and the eastern walls in the northern part of Apamea; next to the baths archaeologists have identified a courtyard which most likely was a palaestra; the complex was supplied by an aqueduct which reached Apamea near its northern gate. Other baths, built by Lucius Julius Agrippa, a wealthy citizen of Apamea, have been found opposite the agora in the central section of the colonnade. 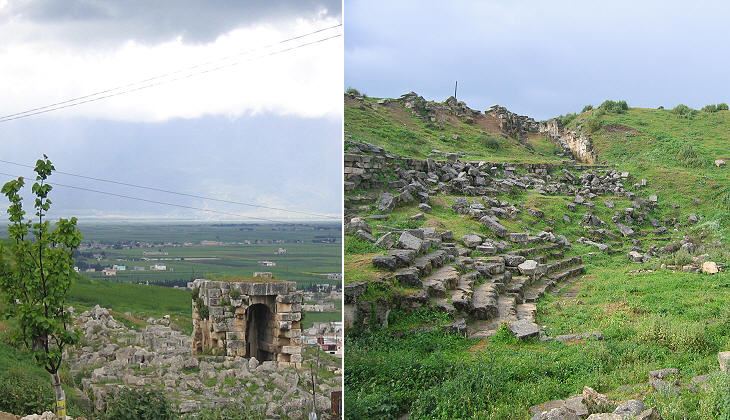 Theatre: (left) one of the entrances; (right) seats for the audience

Archaeologists have measured the theatre of Apamea and found that it is the largest of Syria; it was rebuilt after the 115 AD earthquake; it is much ruined because it was used as a quarry for the construction of the village in the former citadel and of a large khan (inn for travellers) located below. You may wish to see the well preserved theatre of Bosra in Southern Syria. 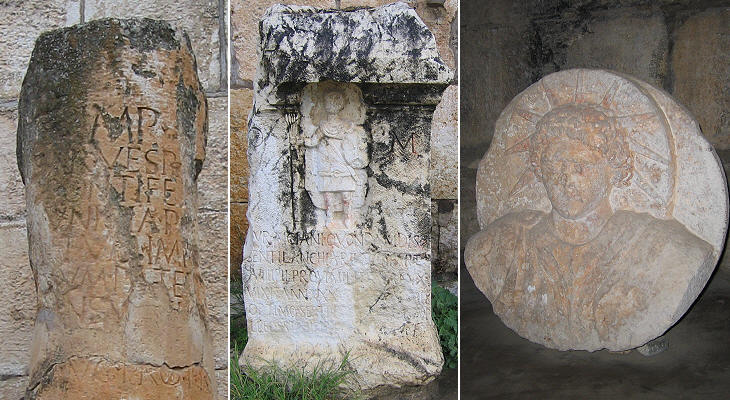 Some of the works of art and inscriptions found at Apamea are housed in a former khan; they help in understanding the history of the city, its importance as a key garrison and the development of new beliefs, such as the cult of Sol Invictus, which were highly popular among the soldiers. 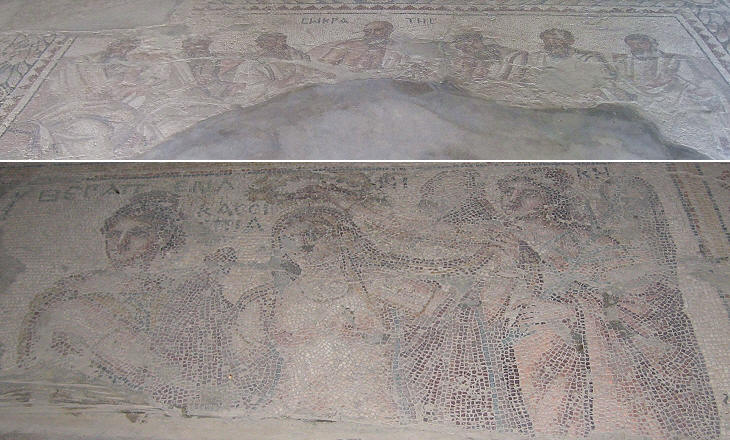 Museum of Apamea: mosaics found under the Eastern Cathedral: (above) Socrates and his disciples (see a fine mosaic portraying Socrates with other philosophers which was found near Baalbek); (below) Cassiopeia, mother of Andromeda, being crowned for her beauty which is superior to that of the Nereids

The warehouses and stables of the khan have not been appropriately equipped for displaying some very interesting mosaics and in particular two IVth century mosaics which were found under the Eastern Cathedral and which decorated a patrician house; they show that the city had still strong links with the Hellenized pre-Christian world; Apamea was the site of a school of Neoplatonic philosophers founded by Iamblichus at the beginning of the IVth century; the mosaic showing Socrates and his disciples is perhaps a metaphor for Iamblichus and his followers; its design resembles the Christian depiction of the Last Supper. The depiction of Cassiopeia is interpreted as the victory of wisdom over savagery. Another mosaic most likely linked to this school can be seen in Brussels. 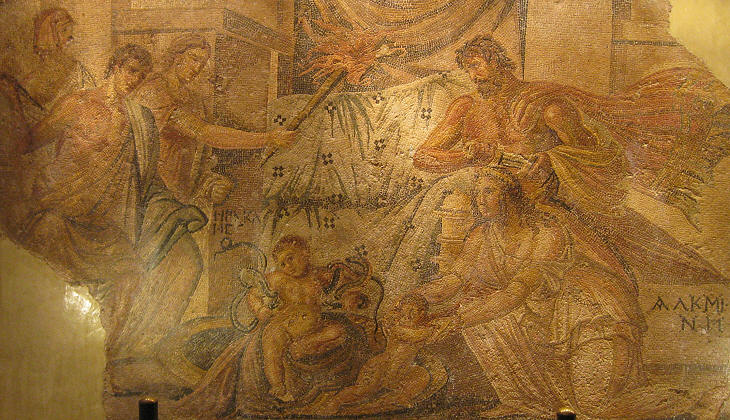 Museum of Maaret an-Nouman: IIIrd century mosaic portraying infant Hercules strangling the serpents sent by Juno to kill him while Iphicles, his half maternal twin brother, asks Alcmene, their mother, for help (see the same subject in a Vth century BC vase at the British Museum)

Marrah is a very poor little town; there is a fine kane on the outside of it.
Richard Pococke - A Description of the East and Some Other Countries - 1745
A large khan at Maaret an-Nouman, some 20 miles north of Apamea, houses another collection of Roman mosaics. A cycle of large mosaics portraying episodes of the life of Hercules shows an impressive level of skill in mastering very complex scenes.

A second mosaic shows the persistence of the Roman myth in the region in the VIth century. The image used as background for this page is based on another Roman mosaic portraying a mythological creature.

Return to page one - The Colonnade or go to
Brussels Museum of History & Art: Exhibits from Apamea