- Amathous and Kition
(Petra to Romiou, where Venus was born)

(November 1738) At the end of the plain there are ruins on a low hill, which are called old Limesol; it is about two leagues from the town. This is generally agreed to be Amathus, which is said to have had its name from Amathus, who built a temple here to Venus called on this account, Venus Amathusia; it is said to have been sacred both to Venus and Adonis. This was probably the capital of one of the nine kingdoms of Cyprus.
Richard Pococke - A Description of the East and Some Other Countries - 1745
We rode always by the side of the sea and at half past eleven had to our right a precipitate cliff of which the sides contained a few ruins, but so nearly washed away that it was impossible to distinguish what they were.
William Turner - Journal of a Tour in the Levant - 1815. 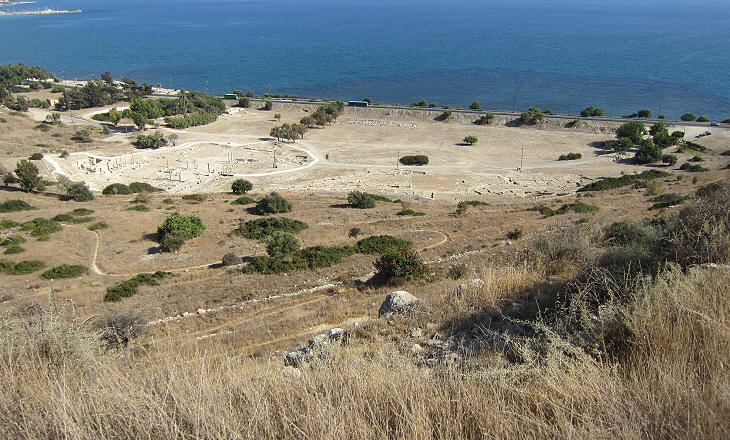 Lower town seen from the Temple to Venus

On the hill on which Amathous stood, nothing is now visible, but a vast amount of stones, plaster, and broken pottery. Even the hill itself is fast losing its form, while the rock of which it is composed is being cut away to be shipped to Port Said (for the construction of the Suez Canal), bringing the merchants of Limassol a profitable return. From the great amount of debris which covers the surrounding fields, Amathous, it would seem, though small in area, was a thickly populated city. Originally the upper part of the hill had been encircled by a wall, remains of which are now scarcely perceptible; portions, however, of another wall of a later period may be observed on the southern side looking towards the sea.
Luigi Palma di Cesnola - Cyprus, its ancient Cities, Tombs and Temples (1877). 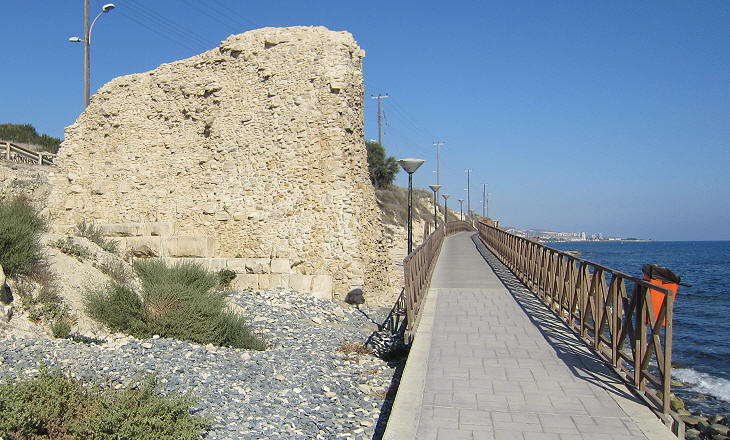 Wall at the harbour

There are remains of the town walls, which are fifteen feet thick, and cased with hewn stone. Pococke
Today the archaeological area of Amathous (or Amathus or Amathonte) interrupts the ten mile long strip of sea resorts to the east of Limassol. A wide coastal road separates the lower town from the now submerged harbour which was protected by walls. Its breakwaters are still visible to snorkellers. 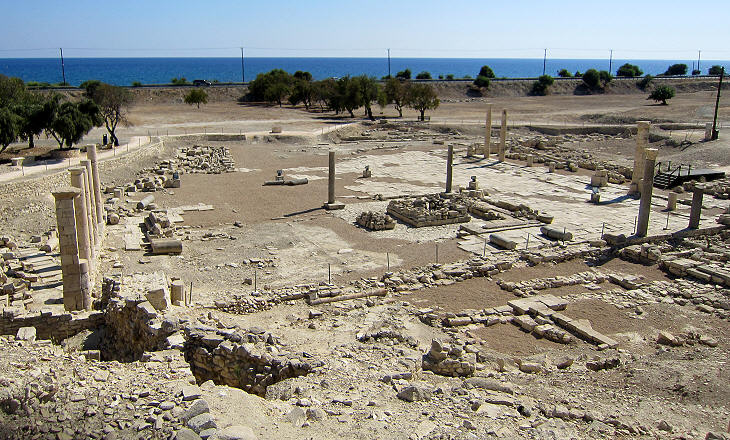 Amathous was a very prosperous town between the VIIIth and the VIth century BC when Cyprus was part of the Persian Empire. It had trading links with Phoenician ports, such as Arados (Arwad) and with Egypt.
Its monuments however are mainly dated after the earthquake which hit Amathous in 77 AD. 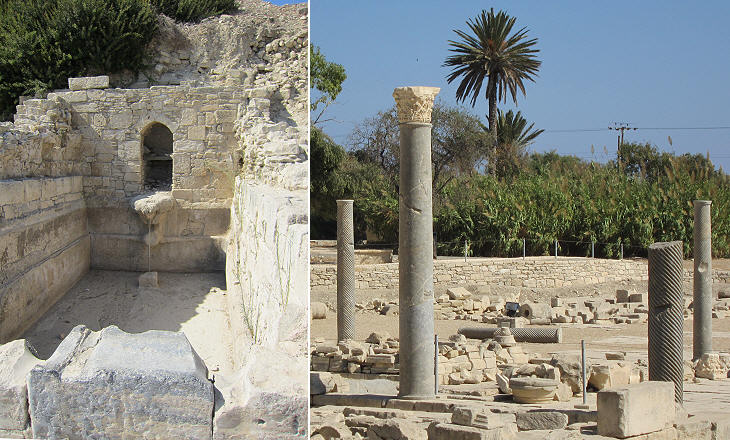 Amathous was still a rather wealthy town when it was reconstructed after the earthquake. The agora/forum was decorated with columns and capitals of different marbles which came from abroad. An underground conduit provided public baths adjoining the agora with water. 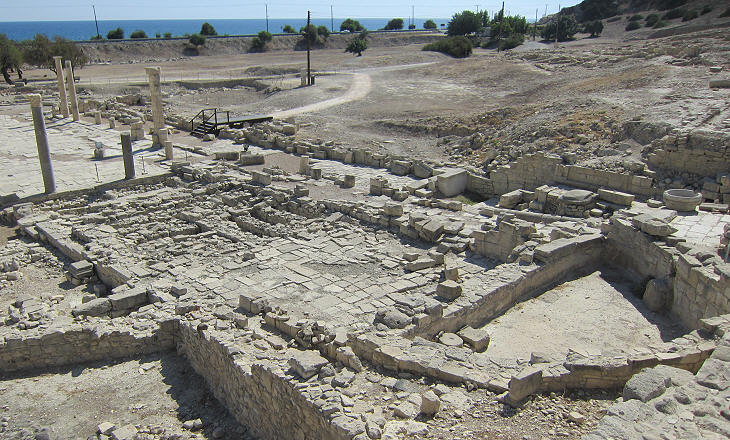 Apollo, along with Venus, is the Greek god who was most worshipped on Cyprus. At nearby Kourion a sanctuary was dedicated to Apollo. The temple at Amathous has a rear section which is usually found at sites where oracles were delivered from a crypt behind the statue of the god. Apollo was an oracular god and the patron of the Oracle of Delphi and of that of Didyma. 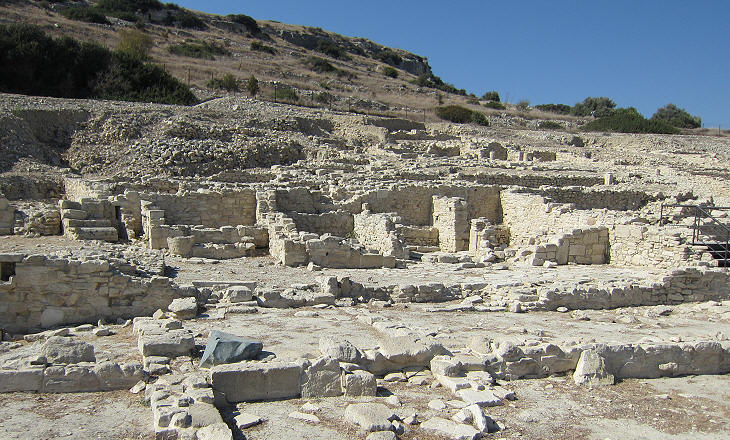 Buildings inside the Byzantine walls

The walls of Amathous in its heyday surrounded the hill of the acropolis and reached the sea, thus protecting the lower town and the harbour too. Other walls separated the acropolis from the rest of the town so that it was a sort of citadel. Records of bishops of Amathous indicate that the town was still existing in the VIIth century, but at that time it was limited to the lower town which was protected by a low wall. Midway between the acropolis and the lower town French archaeologists have identified a large complex of buildings which are assumed to have been the residence of the kings of Amathous. The complex included cisterns and warehouses, but it appears to have been abandoned in the late IVth century BC when Amathous (and the whole island) were assigned to Ptolemy, one of the generals of Alexander the Great, who founded the last dynasty of Egyptian pharaohs. 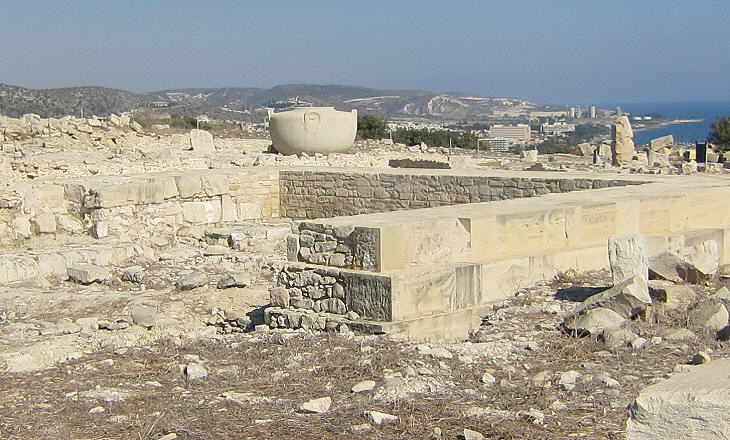 On the west side there is a building like an old castle, probably on the site of the antient city, which might extend to the east as far as that part, where there are great heaps of ruins, and among them a handsom ruinous church, which may be on the spot where the temple was built to Venus and Adonis, in which the feasts of the latter were annually celebrated. Pococke
The top of the acropolis was occupied by a large sanctuary to Venus. It was rebuilt by the Romans above the foundations of an earlier building. According to Roman historian Tacitus it was the second oldest sanctuary to Venus on Cyprus after that at Palaia Paphos. The sanctuary was almost totally dismantled in the VIth century AD. 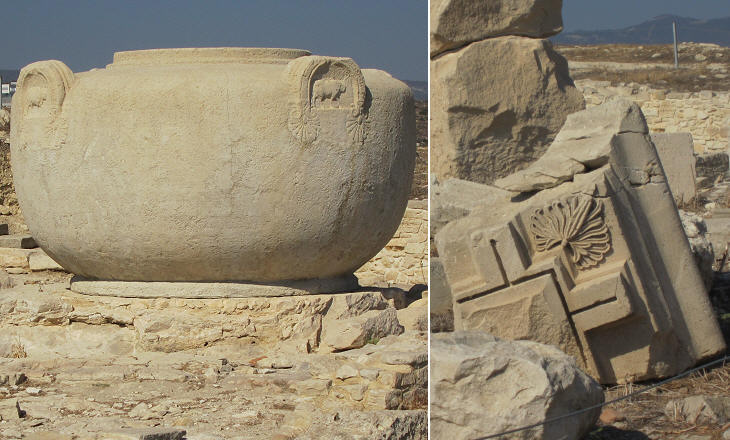 Temple to Venus: (left) copy of the Great Jar; (right) detail of a lintel

In 1865 the French persuaded the Ottoman government to allow them to take away a colossal stone jar which stood in the sanctuary. It is now at the Louvre Museum in Paris (it opens in another window), but the French Archaeological School of Athens, which since 1975 is carrying out excavations at Amathous, has placed a copy on the site where the jar was found. The water contained in the jar was used for ritual ablutions. Its decoration indicates that it was made when the sanctuary was dedicated to a local fertility goddess, rather than to Venus. 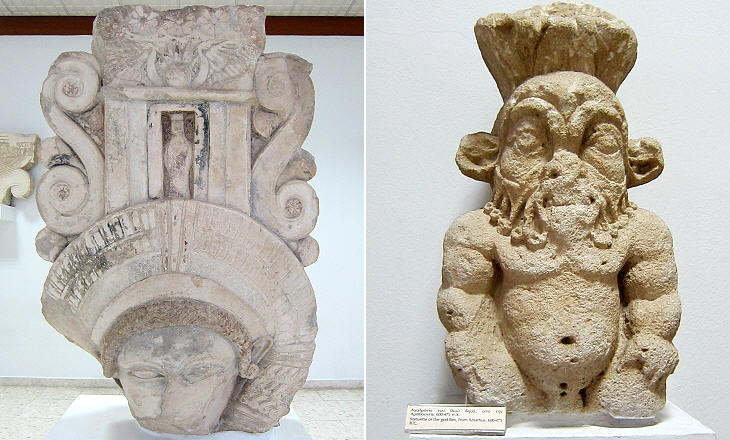 Museum of Limassol: statues from Amathous: (left) Hathor/Astarte; (right) Bes (see a statue of the god which was found in Rome)

I discovered at a later period two terra-cotta statuettes of a bearded female figure in tombs belonging to that city (Amathus). di Cesnola - Cyprus.
Macrobius, one of the last pagan writers, reported that there was a statue of Venus on Cyprus, that's bearded, shaped and dressed like a woman, with male genitals (Saturnalia). Later systematic excavations led to the discovery of statues of deities of Egyptian/Phoenician origin. Hathor and Astarte were both goddesses of fertility, whereas Bes was protector of childbirth for the Egyptians and of navigation for the Phoenicians. The image used as background for this page shows a detail of the headdress of Hathor/Astarte. Museum of Limassol: Vth century AD mosaic from Alassa portraying the Toilet of Venus. The inscription EP AGATHOIS means "for a good cause" a well-wishing formula

It was probably only in the IVth century BC that Venus on Cyprus was completely associated with Greek Aphrodite and portrayed as the goddess of beauty and love, rather than of fertility and childbirth. The mosaic found at a bath building at Alassa, an inland location not far from Amathous, indicates that she was believed to bring good luck by the early Christians. 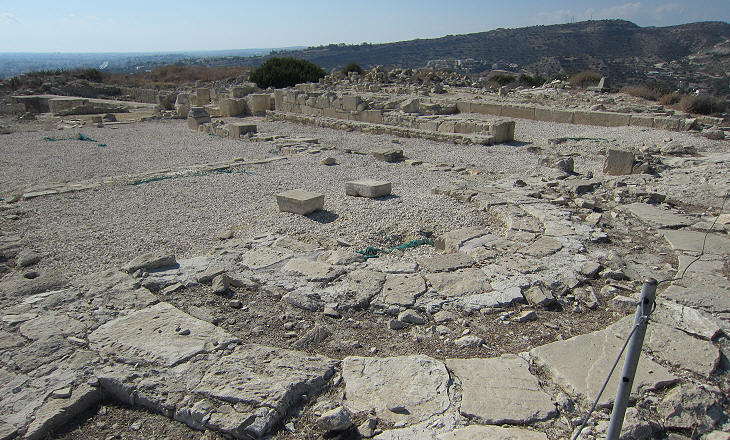 Basilica adjoining the Temple to Venus

A large basilica which was likely part of a monastery was built with materials from the Temple to Venus. It was abandoned after the Arab raids of the VIIth century. Its walls were utilized as a quarry and archaeologists have only been able to identify its foundations. 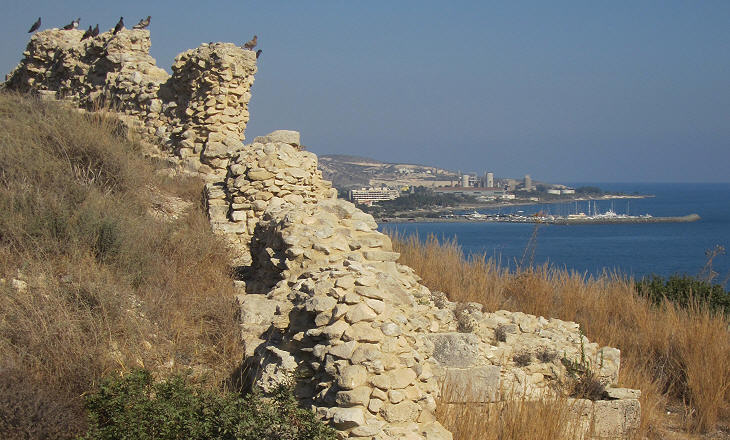 Walls of the upper town 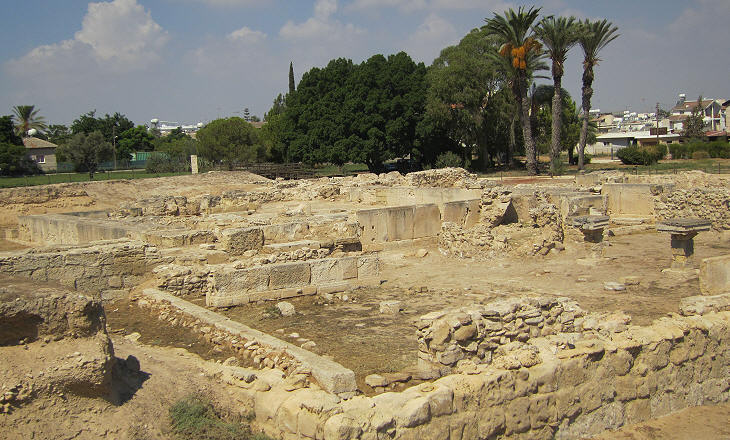 Ancient Kition with the foundations of a Temple to Astarte

Citium was famous for the birth of the great philosopher Zeno, and for the death of the renowned Athenian general Cimon, who expired at the siege of it. Ptolemy destroyed this city, and removed its inhabitants to new Paphos; it was about three miles in circumference: There is reason to think that in very antient times the sea washed the south walls of it, though it is now a quarter of a mile distant. (..) In the foundations of the walls there have been found many stones with inscriptions on them, in an unintelligible character, which I suppose, is the antient Phoenician; (..) these stones might be put into the walls when they were repaired. Pococke
Kition was a Phoenician settlement of great importance, the ruins of which can be seen at the periphery of Larnaca, a port which was used as an alternative to Famagusta in the XVth century, when the latter was in Genoese hands. Kition lost importance in favour of Paphos and Salamis and it was almost reduced to a village at the time the Romans occupied the island. It is thought that Larnaca derives its name from a Greek word meaning terracotta coffin because the land surrounding the town was full of tombs of ancient Kition. 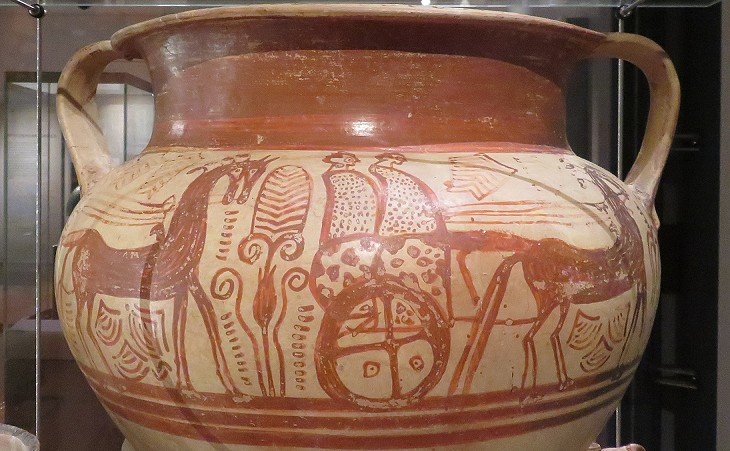 Ashmolean Museum of Oxford: krater from Maroni, near Kition (XIVth century BC); it shows the influence of Mycenaean patterns