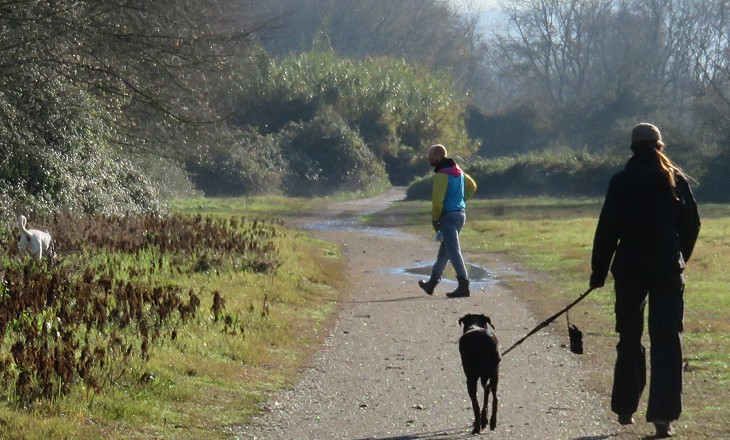 Valle della Caffarella and its main monuments are covered in a page dealing with the initial section of Via Appia Antica. The site, which still partly belongs to private owners, was opened to the public in the 1990s. It has a relatively wild aspect unlike the formal gardens of Villa Borghese or Villa Doria Pamphilj and it is chosen by many people as a place to walk their dogs. The photos shown in this page were taken in early December 2014 after a period of rainy days. 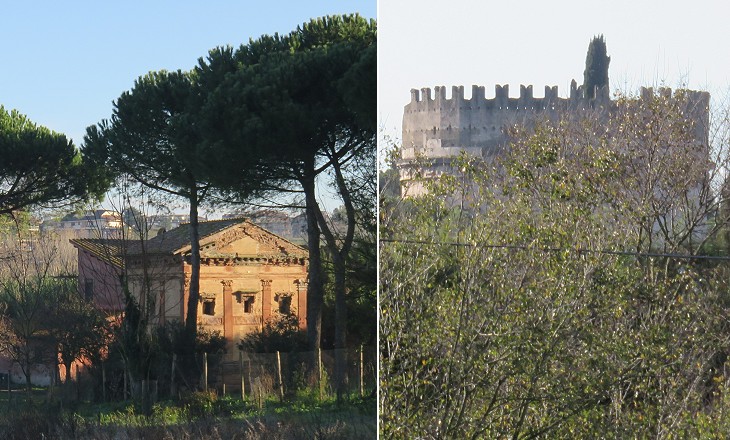 The valley is named after Cardinal Scipione Cafarelli Borghese, nephew of Pope Paul V, who owned it in the XVIIth century, and it is limited by two parallel ridges where the ancient Romans built Via Appia and Via Latina. It is crossed by the River Almo, a small stream which turned parts of the valley into swamps and made it very unhealthy from the VIth century until the XIXth century. 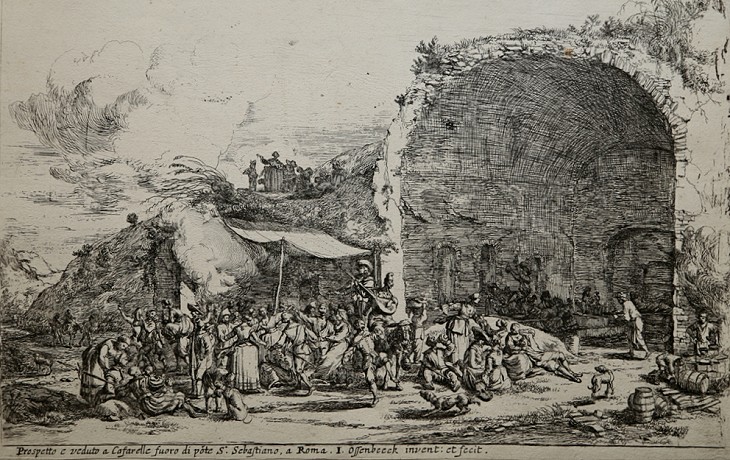 In the XVIIIth century many foreign visitors to Rome were attracted by the evocative aspect of the ruins at Valle della Caffarella. Before that period it was so abandoned that it was chosen by the Dutch/Flemish artists living in Rome for their festivals. They formed a brotherhood and called themselves Bentvueghels (birds of a feather). They had an elaborate rite of admission based on a long series of toasts which was performed at S. Costanza. They held their yearly festivals outside Rome to avoid being arrested by the papal police for drunkenness. These gatherings took place until the XIXth century when they included artists of other northern countries. The venue of the meetings was moved to Tor Cervara. 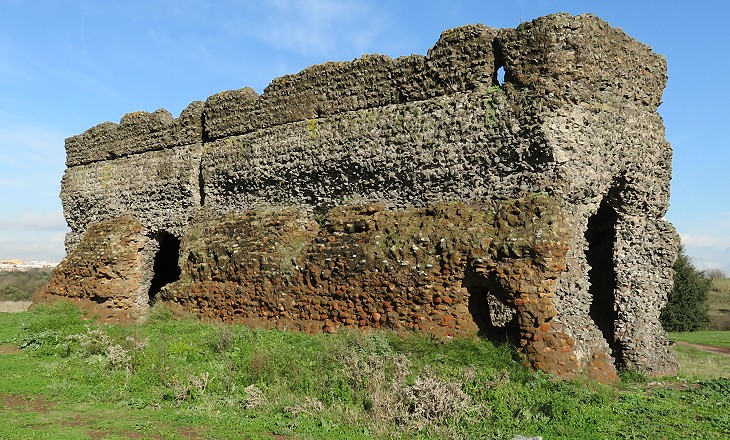 In the IInd century AD most of Valle della Caffarella was part of Pagus Triopius, a large estate which belonged to Annia Regilla and Herodes Atticus. It included land beyond Via Appia and a villa, the baths of which were unearthed in the 1990s. A branch of the aqueducts carrying water to Rome supplied the estate. A large cistern at the top of a hill with a commanding view over Valle della Caffarella shows how effective Roman construction techniques were, in particular in the use of mortar. 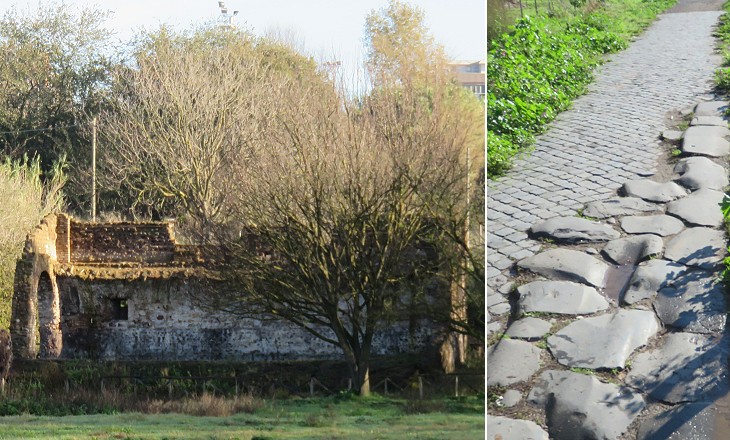 (left) An ancient cistern turned into a barn and then abandoned; (right) stones of ancient Via Latina

In some places (depending on the season) Valle della Caffarella has a rather forlorn aspect which appeals to those who know by heart some past descriptions of the place:
Alas our young affections run to waste,
Or water but the desert: whence arise
But weeds of dark luxuriance, tares of haste,
Rank at the core, though tempting to the eyes,
Flowers whose wild odours breathe but agonies,
And trees whose gums are poison; such the plants
Which spring beneath her steps as passion flies
O'er the world's wilderness and vainly pants
For some celestial fruit forbidden to our wants.
Lord Byron - Childe Harold's Pilgrimage - Canto the Fourth - CXX
A number of ruined ancient buildings and other evidence of the past can be found at many points of Valle della Caffarella. A small archaeological area containing some interesting tombs is within easy reach from the Via Latina side of the valley. 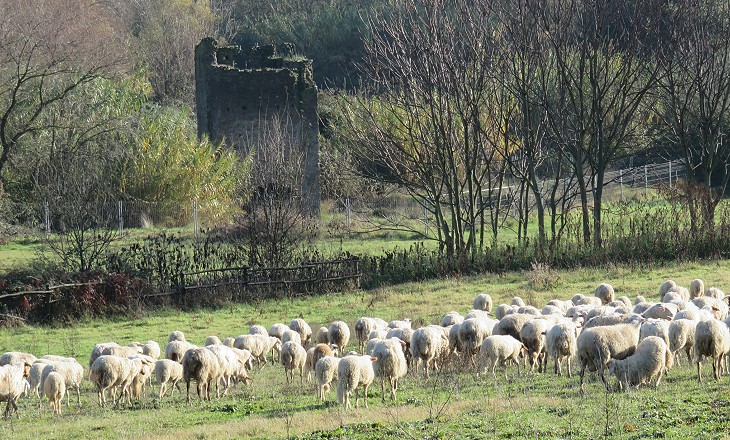 We had to traverse thirty miles of this Campagna; and for two-and-twenty we went on and on, seeing nothing but now and then a lonely house, or a villainous-looking shepherd: with matted hair all over his face, and himself wrapped to the chin in a frowzy brown mantle, tending his sheep.
Charles Dickens - Pictures from Italy - 1846
The Campagna, in the colourless even light, was more solemn and romantic than ever; and a ragged shepherd, driving a meagre straggling flock, whom we stopped to ask our way of, was a perfect type of pastoral, weather-beaten misery. He was precisely the shepherd for the foreground of a scratchy etching.
Henry James - Italian Hours - 1909 - piece written in 1873.
Here (it may be within sight of St. Peter's and the Lateran basilica) does this rude servant of the soil spend the long seasons of his monotonous existence, till the summer-sultriness obliges him to migrate with his dogs and sheep. (..) Yet, despite his wild and savage aspect, this shepherd, on near approach, proves a harmless creature.
Augustus J. C. Hare - Days near Rome - 1875
Travel accounts of the past always included some references to the shepherds of the Campagna (today they have been replaced by shepherds from Romania). See other sheep in nearby Via Appia. 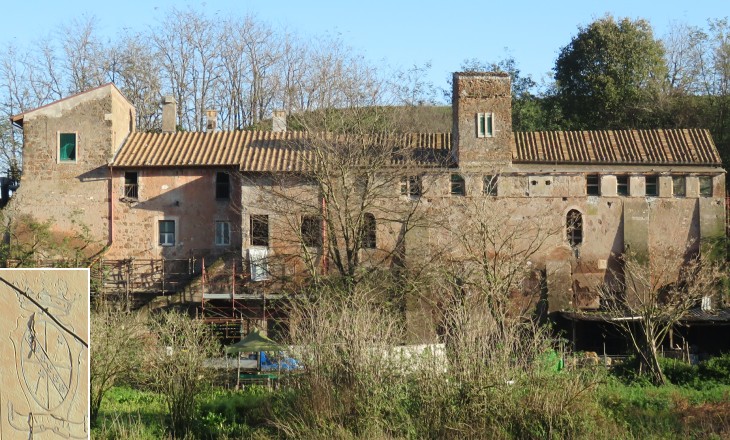 Casale della Vaccareccia; (inset) coat of arms of the Torlonia

Casale della Vaccareccia was built in the XVIth century and it incorporated a small medieval tower. In 1816 it was bought by the Torlonia, who enlarged it by adding a stable. They owned most of the land along Via Appia. A section of Casale della Vaccareccia is still used for farming activities, whereas the major part of the building is being restored and will be used for public purposes. 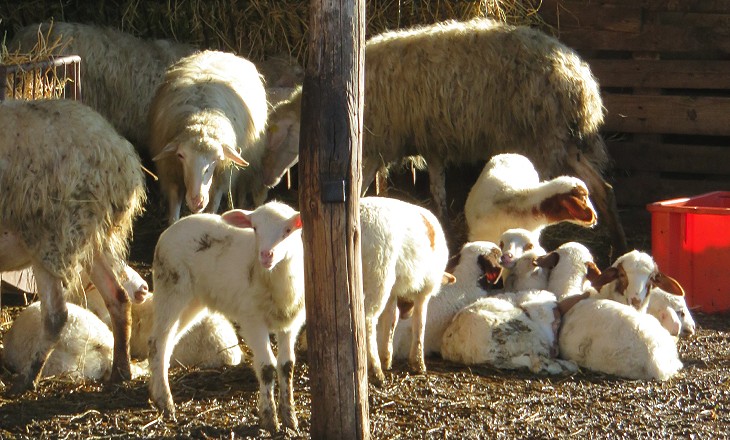 In the sheep pen

Farm holidays have become popular in recent years because they allow children living in town the opportunity to watch at close range animals they have seen only in books. At Casale della Vaccareccia, which is not such a facility, one can capture the real thing. 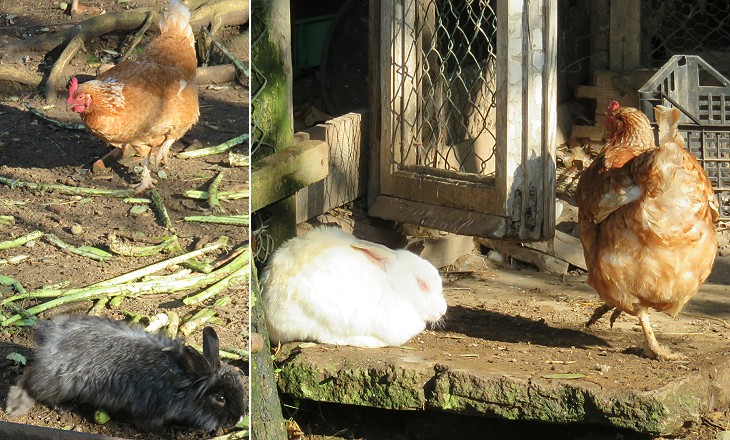 Hens and black and white rabbits

This very rural setting is only two miles from Colosseo (as the crow flies). Owners of land in Valle della Caffarella have repeatedly requested to be allowed to develop their properties. It has been a long struggle which has not yet concluded, because laws protecting the historical landscape are being criticized as hampering the economic growth of the country and could be modified. 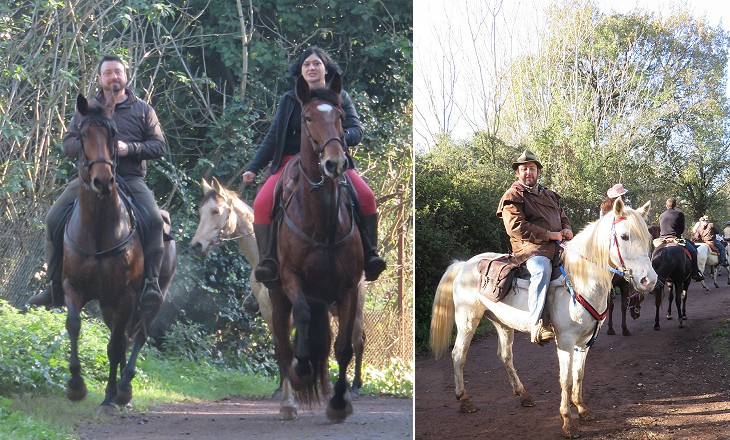 I shall always remember the first ride I took (..). It was mild midwinter, the season peculiarly of colour on the Roman Campagna; and the light was full of that mellow purple glow, that tempered intensity, which haunts the after-visions of those who have known Rome like the memory of some supremely irresponsible pleasure. (..) Here and there in the distance, among blue undulations, some white village, some grey tower, helped deliciously to make the picture the typical "Italian landscape" of old-fashioned art. (..) To ride once, in these conditions. is of course to ride again and to allot to the Campagna a generous share of the time one spends in Rome. Henry James
Of all glorious things here I think a ride on the Campagna in the morning or the evening is the most beautiful. There one has Rome and Italy, the past and the present, all to oneself.
Henry Adams in a letter of 1860. 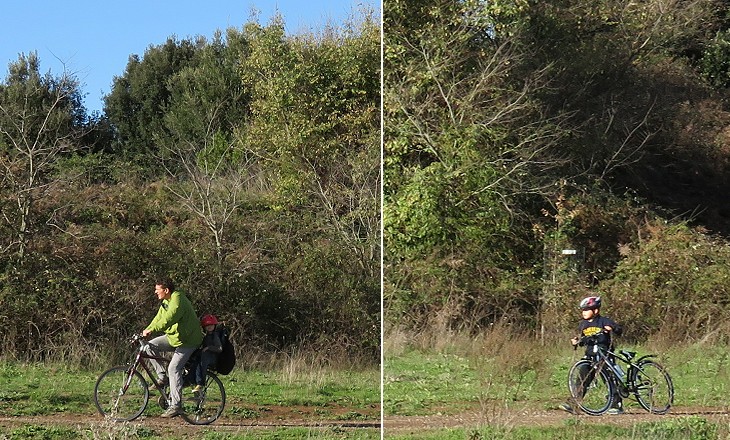 Horse riding is rather expensive nowadays, so it is easier to find bikers (and joggers) than horsemen at Valle della Caffarella. There are a number of paths reserved to them which pass near some of the ancient monuments. 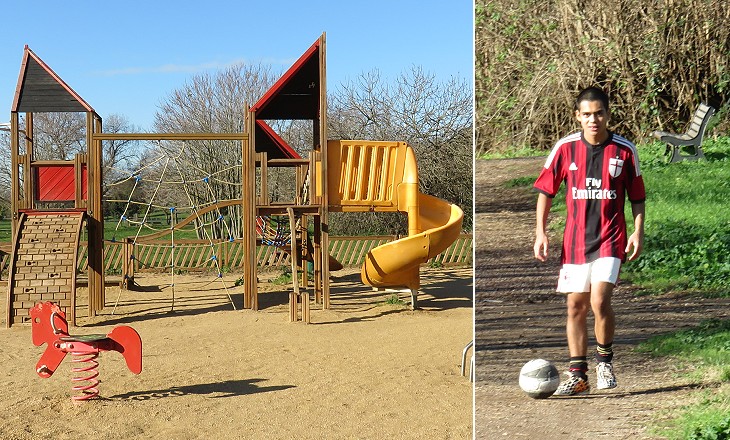 The area near Via Latina has been modified and has some of the facilities you expect to find in a city garden, including information on plants and animals living there. 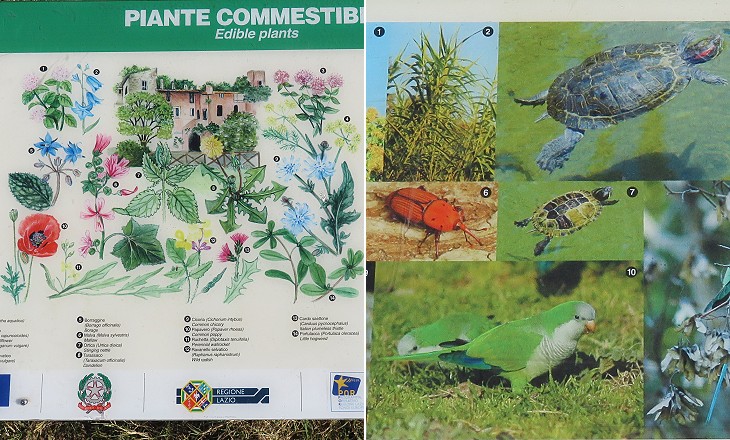 Other Days of Peace pages:
A Sunny Day in Villa Borghese
At the Flea Market
At the Beach
Voicing Your Views ..... and feeling better
Christmas in Rome
Eating Outdoors
Celebrating the Foundation of Rome
A visit to Roseto di Roma
The procession of La Madonna de Noantri
Running the Marathon
Watching the Parade
Finding Solace at the Protestant Cemetery
Attending 2007 July Events
Rome's Sleepless Night
Attending Winter Ceremonies
Jogging at Valle delle Camene
Sailing on the River to see the Bridges of Roma
An October Outing to Marino
Attending a Funeral ...and enjoying it!
A Special Spring Weekend
Embassy-hunting in Parioli
Celebrating Eritrean Michaelmas in Rome
Visiting Rome at Dawn
Visiting Rome in the Moonlight
Visiting Rome on a Hop-on-Hop-off Bus
Visiting Multi-ethnic Rome
Baroque Fireworks
Playing in the Snow at the Janiculum
Watching the Pride Parade
Visiting the Movie Sets at Cinecittà
Reading Memoirs of Hadrian at Villa Adriana
Looking up at the Ceilings of the Vatican Palaces
Reading Seneca at the Baths
Spending the Last Roman Day at St. John Lateran's Cloister
Reading Ovid at St. Peter's
Keeping up with new discoveries at Museo Ninfeo