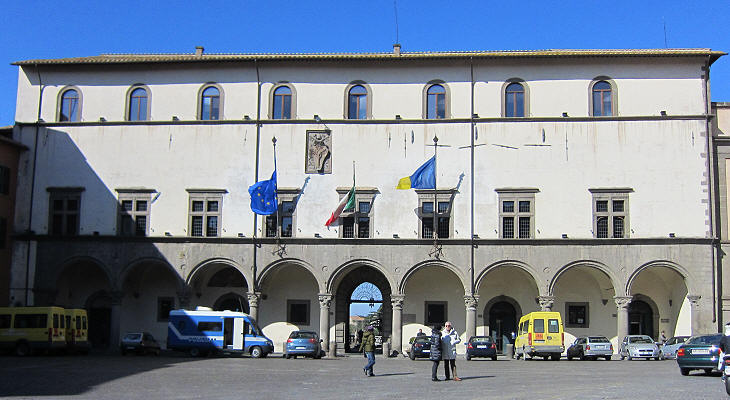 Viterbo acquired great importance in the XIIIth century when the popes lived in the Papal Palace, but after that period it slid into obscurity; in 1460 work started at the old Town Hall to turn it into the residence of the papal legate, the governor of the town; only the portico belongs to the medieval building while the windows are similar to those of Palazzo Venezia in Rome, which also was being built in that period. 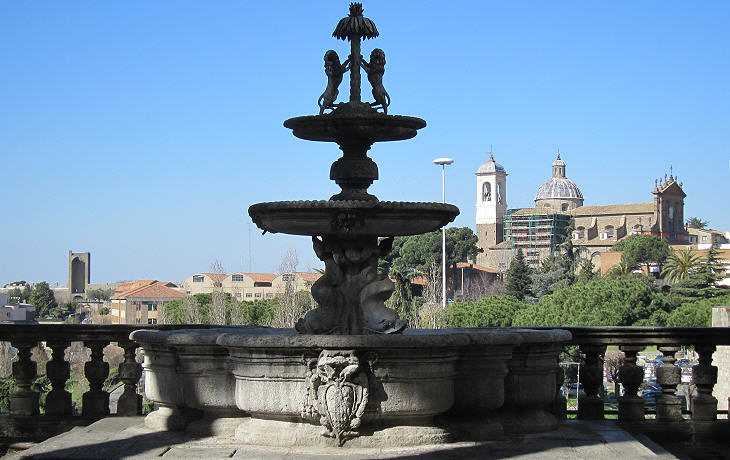 Palazzo Comunale: fountain in the courtyard and in the background SS. Trinità

The great piazza where stands the Palazzo Pubblico within whose court is such a fine view of the city and the hills beyond.
Augustus J. C. Hare - Days near Rome - 1875
The rear side of Palazzo Comunale ends with a terrace which offers a fine view over the hill situated at the north-western corner of the town; in 1626 the terrace was embellished with a fountain, similar in shape and design to Roman fountains of that period. The palace still houses the Town Hall of Viterbo. 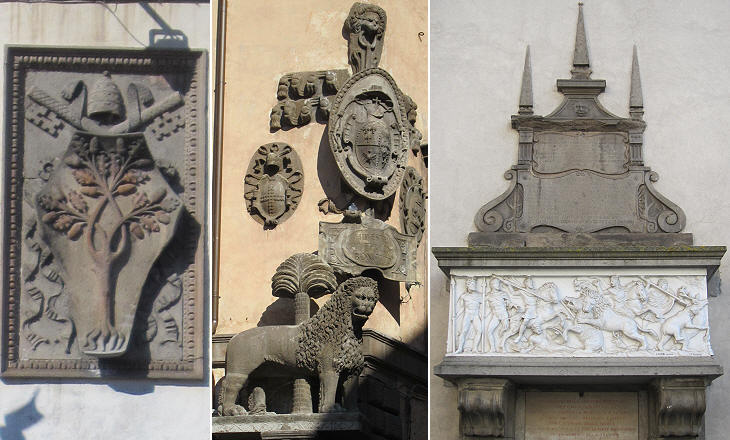 The ancient sarcophagus which is decorated with a boar hunting scene is named after Bella Galliana, a legendary beautiful woman, for whom a Roman baron waged war on Viterbo; his attempts to conquer her by force having failed, he offered to lift the siege to the town in return for being given the chance to see her again; when the beautiful woman appeared at the window of a very high tower he killed her by shooting an arrow. 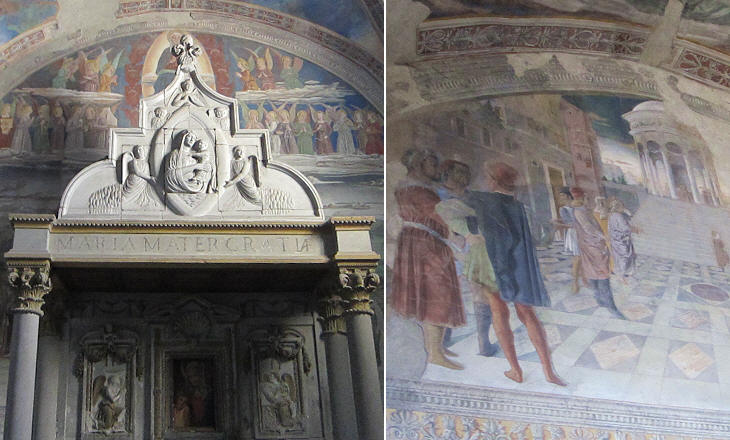 Next to S. Francesco, the most interesting church in Viterbo is that of Sta. Maria della Verità, outside one of the gates. The interior was once painted all over with frescoes of the rare master Lorenzo di Viterbo, who spent twenty-five years upon the work, completing it in 1469. The church was used as a hospital during the plague, after which it was thought necessary to whitewash it all over, only a greatly-revered figure of the Virgin and one or two saints being preserved in the body of the church. But the chapel of the Virgin was uninjured. It stands on the right of the nave, from which it is separated by a curious screen of wrought-iron, and it is covered all over with frescoes from the story of the Madonna. In the picture of the Nativity, her figure, kneeling in a long white veil, is perfectly lovely. The oblong fresco of the Sposalizio, crowded with figures, is most interesting, not only as a memorial of thirteenth-century art, but of all the persons living in Viterbo at that time, as every figure is a portrait. Hare
S. Maria della Verità is a medieval church outside the walls of Viterbo, which because of its proximity to the railway station was heavily bombed in 1944; an excellent restoration has recovered to a great extent the fine frescoes which decorated a Renaissance chapel; the paintings by Lorenzo da Viterbo are very interesting also because they document the way the richest inhabitants of Viterbo were dressed. 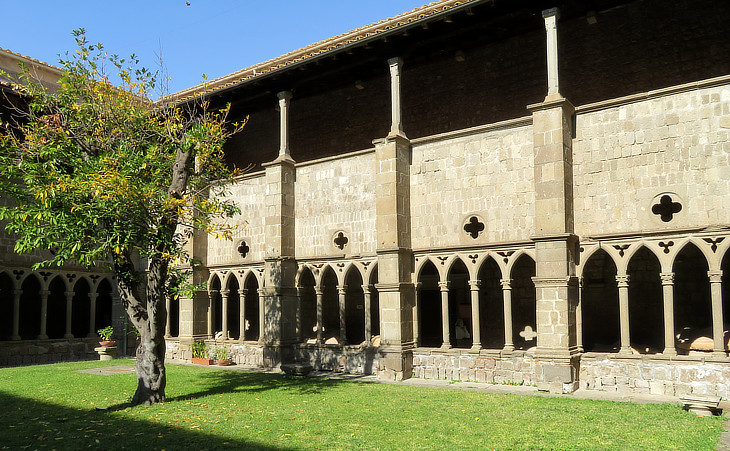 The church was part of a convent of the Servites which was confiscated and deconsecrated in 1873 and utilized as a school. In 1912 first the church and then the convent were turned into the Town Museum of Viterbo which is dedicated to Luigi Rossi Danielli who donated his collection of Etruscan works of art. The cloister of the convent is a mixture of Gothic and Renaissance style. 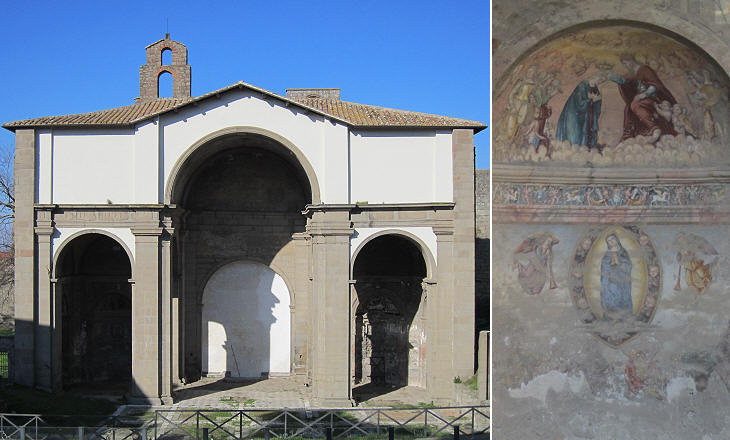 The 1944 bombs destroyed most of S. Maria delle Fortezze, a Renaissance church built in 1514-1521 and which also stood near the railway station; what is left resembles a portico, but it is actually the rear part of the building. 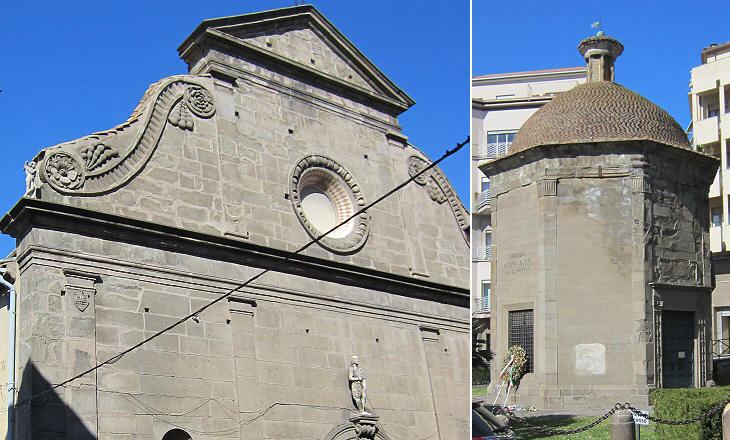 Florentine Cardinal Giovanni de' Medici (Pope Leo X) promoted the construction of Collegiata di S. Cristina at Bolsena, a very elegant Renaissance building; Giovanni Battista Almadiani from Viterbo, one of his advisors, financed the construction of a church dedicated to St. John the Baptist, the patron saint of Florence; the design of the building is attributed to a local architect who surely had seen S. Agostino in Rome.
A Renaissance chapel is located near S. Giovanni Battista; it is an ex-voto built for the end of a pestilence in 1501; it is now dedicated to the Fallen of WWI. 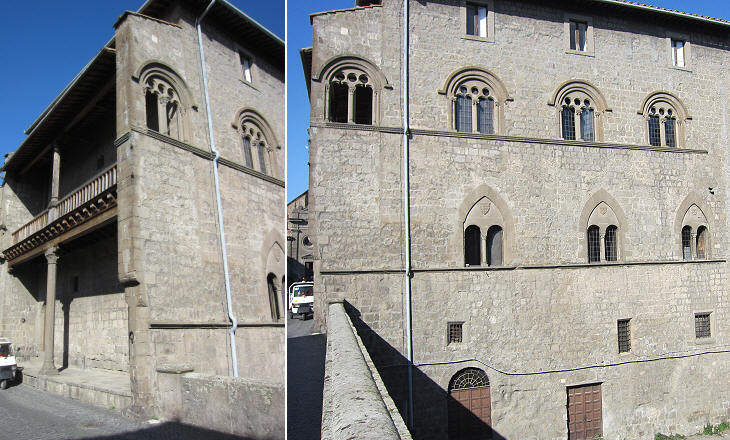 Palazzo Farnese: (left) side on the street leading to the Cathedral; (right) main façade

The Farnese, the family of Pope Paul III came from Canino, a small town between Viterbo and the sea; the palace named after them is actually a medieval building which they acquired in 1431 and where they lived for a century. 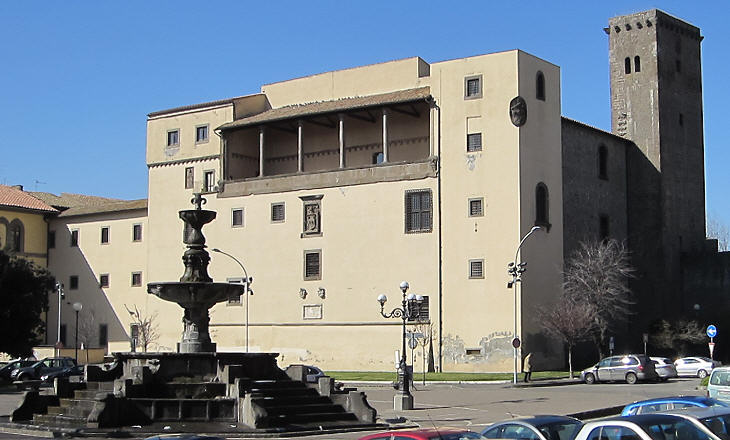 In 1354 Cardinal Gil de Albornoz built a small fortress at the northern end of the town; it was not meant to protect Viterbo from external threats, but to strengthen papal authority over its inhabitants. The original fortress was modified by several popes and eventually by Pope Paul III who added a loggia at the top of the building; he had done the same at Castel Sant'Angelo. The fountain was designed by il Vignola for Cardinal Alessandro Farnese, grandson of the Pope (you may wish to see Palazzo Farnese di Caprarola, a grand countryside palace which Vignola designed for the Cardinal, not far from Viterbo). 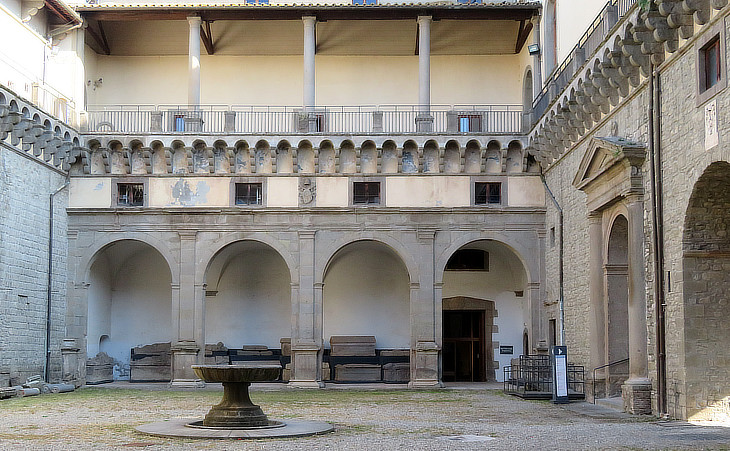 The courtyard has a definite Renaissance appearance because in 1506 it was redesigned by Donato Bramante for Pope Julius II. The building had not yet lost its military role, but the Pope and after him Pope Paul III regarded it as a fortified residence where they could retire in case of trouble in Rome and wanted it to be suited to their rank and dignity. 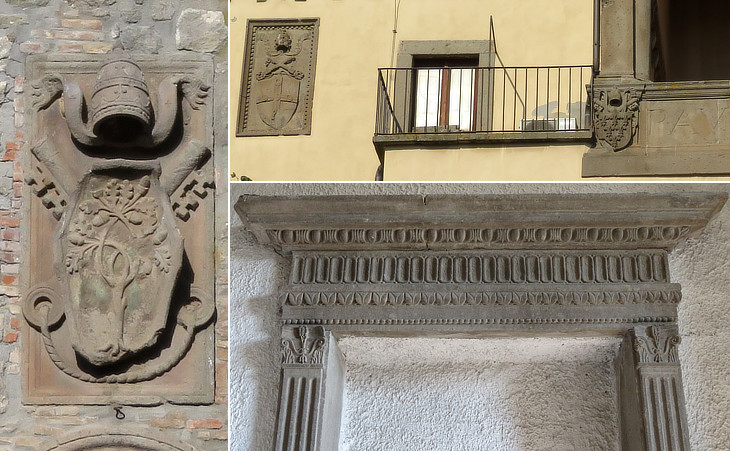 In 1738 the building was modified to turn it into an orphanage. In 1860 it became a barracks of the Papal troops and after 1870 of the Italian Army. Since 1986 it houses the National Archaeological Museum of Viterbo. 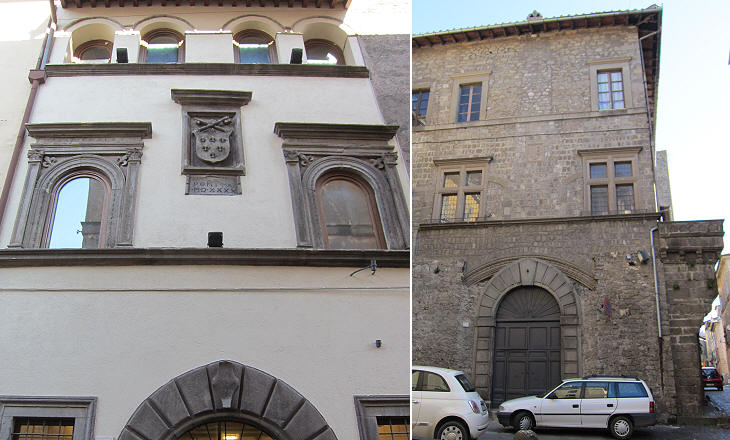 Another building of Viterbo is associated with Pope Paul III: the house of his barber Giovanni Antonio Baciocchi; inscriptions on the windows make reference to his trade, but one must bear in mind that barbers at that time performed several duties including pulling teeth and probably this explains how Baciocchi made enough money to build his house, which is located very near that of the Mazzatosta, one of the wealthiest families of Viterbo. 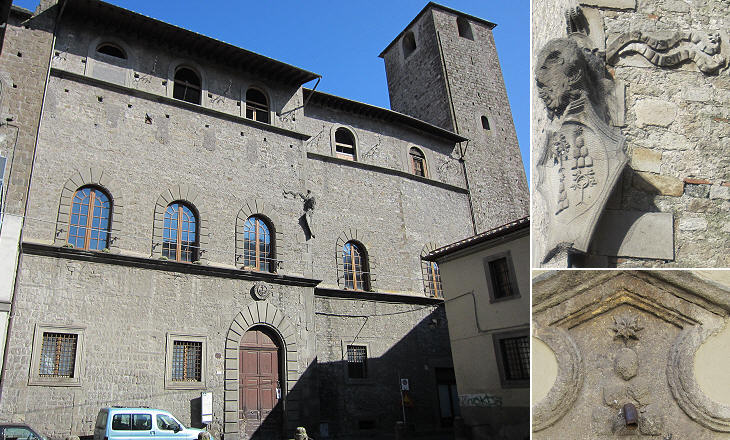 (left) Palazzo Chigi; (right) details showing the coat of arms and heraldic symbols of the Chigi

The streets of Viterbo are full of old palaces. (..) The old Palazzo Chigi is very curious. Hare
Palazzo Chigi was built in the XVth century and it was acquired by the Chigi in 1510 in connection with the concession of mining the alum mines at Tolfa; the building had large warehouses where the product was stocked before being exported to Siena and Florence. 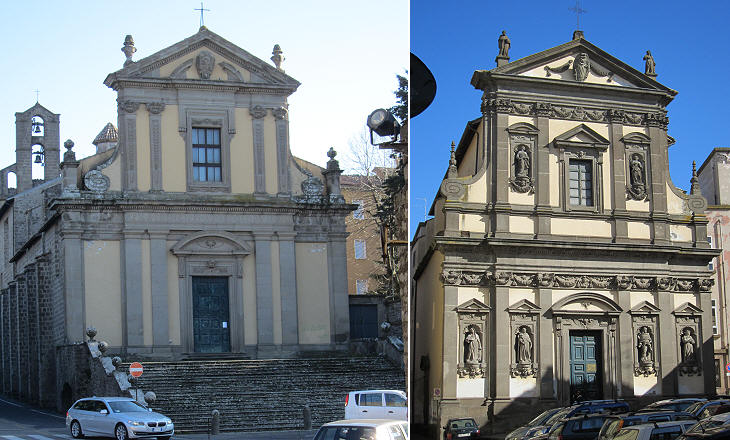 S. Pietro is a medieval church which was redesigned at the beginning of the XVIth century at the request of Cardinal Raffaele Riario (who built Palazzo della Cancelleria in Rome); the steps were added in 1621-1622.
The façade of S. Maria della Pace resembles that of S. Pietro, but its rich decoration indicates that it was built in the second half of the XVIIth century. 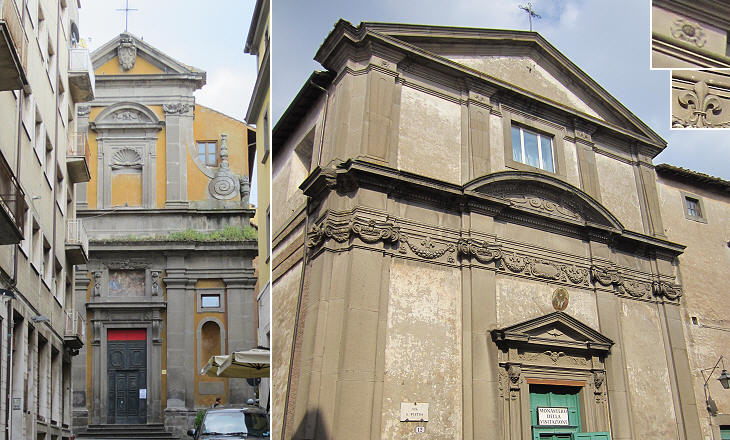 S. Maria del Suffragio was built in 1618 on the site of a medieval church by a brotherhood having the aim to celebrate masses for the souls in Purgatory; these intercessory prayers (suffrages) explain the name of the church; the brotherhood had many rich members and it could financially support the construction of a very elaborate façade.
S. Maria della Visitazione is part of a Cistercian nunnery founded in 1557 by Gerolama Orsini, widow of Pier Luigi Farnese, son of Pope Paul III; the church was built in 1607-1614, many years after her death, but as a tribute to her it was decorated with the Orsini heraldic symbols in addition to the Farnese ones. 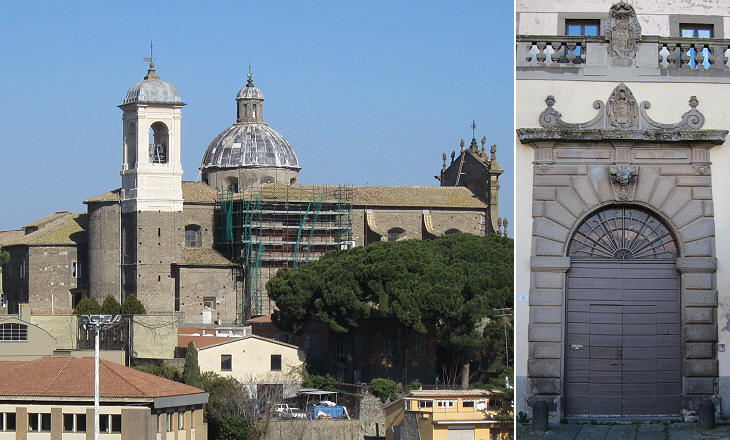 By the end of the XIIIth century the three hills inside the walls of Viterbo were crowned by a large church: the Cathedral on the southern hill, S. Francesco on the north-eastern one and SS. Trinità on the north-western one; the medieval church however was replaced by another building in 1727-1745; it was designed by Giovan Battista Gazzale, who worked in other locations with Giovan Battista Contini, an important Roman architect. 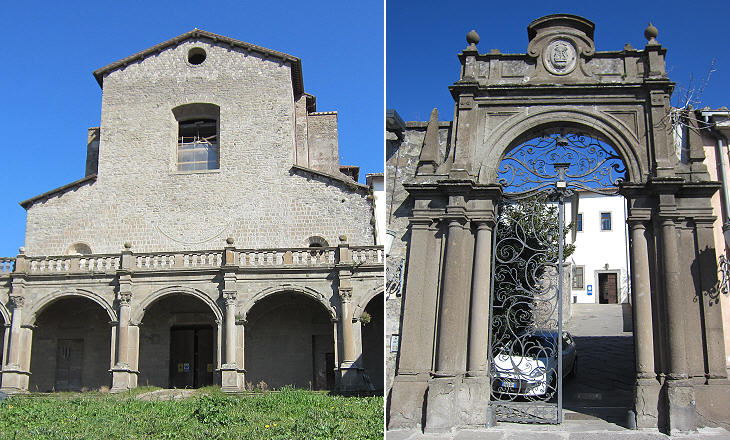 (left) S. Maria in Gradi; (right) portal of the monastery

S. Maria in Gradi is a medieval church which was largely redesigned in 1737-1758 by Nicola Salvi, the architect of Fontana di Trevi. Unfortunately, because of its proximity to the railway station, the church was almost destroyed by bombings in May 1944. 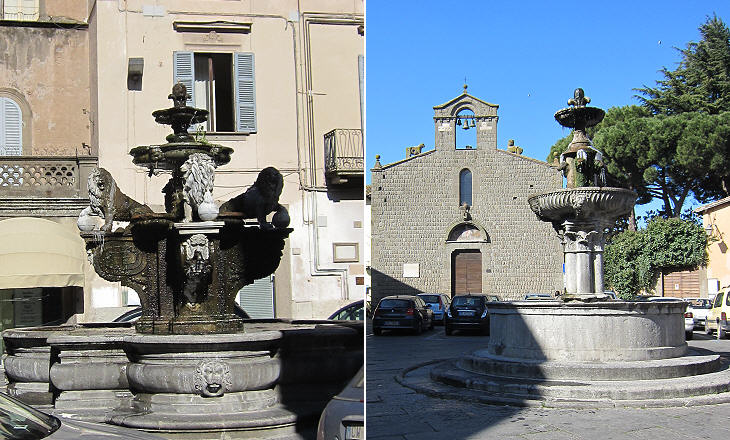 Viterbo is known for its many medieval fountains, but a few fountains were added in the following centuries; Fontana dei Leoni was built by Pope Alexander VI, but it was entirely redesigned in 1621-1625; the lions of the old fountain were replaced by modern statues in 1877.
The fountain in Piazza del Gesù was built in the XVth century, but its current appearance is the result of assembling elements of different fountains; the basin above the capital is similar to that of the fountain in the Papal Palace. 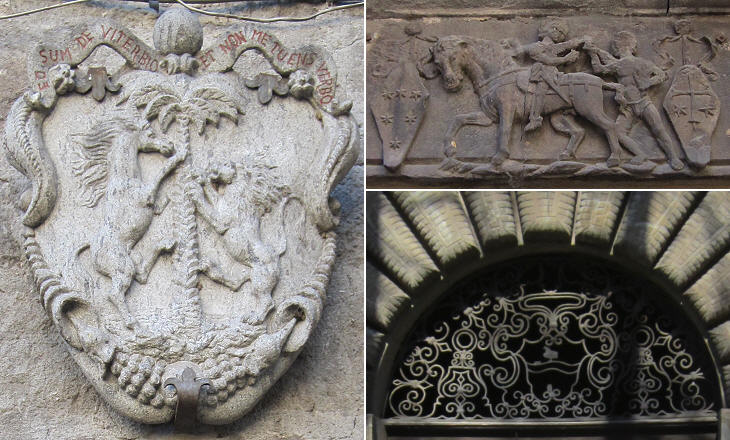 Details which were caught while wandering about Viterbo: (left) heraldic symbols and motto of Viterbo near Porta del Carmine (Leo sum de Viterbo et non metuens verbo - I am the lion of Viterbo and nor do I fear words) . The image in the background of this page also shows the symbols of Viterbo; (right-above) relief with coats of arms near Casa Poscia; (right-below) coat of arms near Piazza della Morte