in Rome and in Veroli
(logo of FAI Spring Weekend and the apse of S. Maria Salome in Veroli)

F.A.I. - Fondo per l'Ambiente Italiano is a private trust founded in 1975 with the aim of acting for the protection of the Italian artistic and environmental heritage.
Every year at the beginning of spring they promote a weekend during which the public can visit monuments and sites which are not usually open.
The initiative is not restricted to the members of the association and no payment is required. 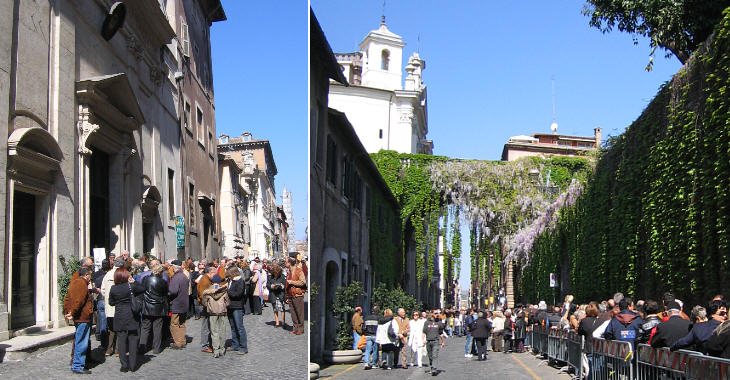 In 2008 550 monuments and sites in 240 locations throughout Italy were visited by some 500,000 people. In Rome the focus of the FAI weekend was on Via Giulia: for the occasion the private owners of Palazzo Farnese (French Embassy), Palazzo Falconieri (Hungarian Cultural Centre) and Palazzo Sacchetti (Sacchetti family) let the public visit their most interesting rooms. Several small churches which usually open only for Sunday mass were open for the whole weekend. 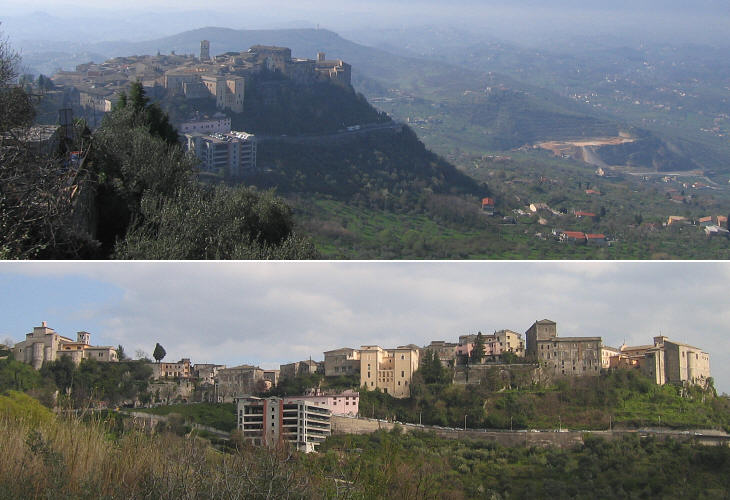 In southern Latium FAI arranged guided tours of the main monuments of Veroli, a town with a very long history.

View towards the Liri River valley and the Apennines

After long hours we reached - leaving the mountains behind us - the fruitful Campagna of Veroli, and I saw this large place before me, perched on a most remarkable hill. It commands a sublime amphitheatre, reaching as far as the kingdom of Naples, over Latium, and everywhere, on the purple hills, gleamed white castles and towns, far away and close at hand. (..) I left Veroli in the middle of a magnificent thunderstorm. The Volscian Mountains and the Apennines were shrouded in the dusky blue, fleeting sunbeams came wandering with magic effect over them, bringing out this or that mountain, or convent, or castle, in the brightest reflected light.
Ferdinand Gregorovius - Aus den Bergen der Herniker - 1858 (The Ernici Mountains) - transl. Dorothea Roberts
Veroli is located very near the old border between the Papal State and the Kingdom of Naples; the latter started beyond the mountains shown above.

Verulae (ancient Veroli) was located on a narrow ridge at the top of a rocky hill: its eastern side was protected by "polygonal" walls of which there is still evidence in the lower part of the medieval walls. This construction technique was typical of the region and it can be seen also at Segni, Ferentino and Alatri.
Verulae was a town allied with Rome so it had the status of civis foederata with the right to some form of self-government. During the Roman rule the centre of the town was moved from the acropolis to a less steep part of the hill.

(left/centre) "Fasti Verulani" and a detail of January and February; (right) stones taken from Roman buildings to decorate a palace

Memories of the Roman period can be found in the foundations of the town hall and of the Cathedral and here and there on the walls of later buildings.
Fasti Verulani are the fragments of a Roman calendar found in 1922. They cover the first three months of the year: the letters NP indicate a holiday such as the Lupercalia (February 15 - at the start of the second column). Minor celebrations were indicated by small inscriptions (first column - end of January - celebration of Castor and Pollux at their temple in the Roman Forum).
The calendar also showed the lucky (fausti) and the unlucky days: the latter were marked by "N" (example in the lower part of the second column). On these days the Romans avoided making important decisions. A recollection of this habit survives in some Italian says such as Di Venere e di Marte nè si sposa, nè si parte - Do not marry or start a journey on a Friday (It. Venerdì) or a Tuesday (It. Martedì). You may wish to see the Fasti Prenestini which were found at Palestrina and the Coligny Calendar, a IInd century AD bronze Gallo-Roman calendar which was found in 1897 near Lyon.

Cathedral and its old rose window; see a beautiful ivory casket which belonged to the Cathedral

There is a great Seminario at Veroli, and the road was crowded with ecclesiastics, scholars in their different dresses of miniature priests, watched over by their professors; and following them were canons and curati, and even the bishop of Veroli, attended by his footmen.
Augustus J.C. Hare - Days near Rome - 1875.
In the VIIIth century Veroli became the residence of a bishop. In the structure of the Papal State this meant tribunals, schools, orphanages and other institutions.
During the Roman rule the lower part of the hill was terraced in order to build a small forum there. The Cathedral was most likely built upon the main temple of the forum; the façade was redesigned in 1706, but the rose-window belongs to the previous building (the coat of arms is of Pope Clement XI).
FAI placed an information point in the square opposite the Cathedral.

The fall of the Western Roman Empire and the dramatic events of the following centuries led the inhabitants of Veroli to rely again on their ancient acropolis for their security. A small fortress was built in the IXth century on the highest point of the hill; the major threat came from the Saracens who raided the coasts of Italy, but the fortress is mainly known because two popes (John X and John XII) were kept prisoners in it.
A small church (S. Leucio) was built near the fortress.
After the year 1000 Veroli gradually benefited from the general recovery of the country: in the XIIIth century a large church was dedicated to St. Salome, whose body was found in 1209. According to the traditional account she was the mother of St. James the Greater. The façade of the church was redesigned in the XVIIIth century.

S. Erasmo is another large medieval church (XIIth century) which was modified in the XVIIIth century; in this case however the old Romanesque features are more evident than in the Cathedral and in S. Salome.

The walls which surrounded the lower part of Veroli do not exist any longer, but the gates have been preserved. Porta S. Croce retains its medieval aspect, while Porta Napoli and Porta Romana were embellished at a later period. Porta Romana was designed at the end of the XVIIIth century by Giuseppe Subleyras (1745-1819), the son of a French painter (Pierre Subleyras) who established himself in Rome and married an Italian miniature painter (Maria Felice Tibaldi). Giuseppe Subleyras built also a church at nearby Boville Ernica. The gate is decorated with the coat of arms of the town and with the inscription S.(enatus) P.(opulus) Q.(ue) V.(erulani).

In the XVIth century Veroli had the privilege of being ruled by a cardinal: in 1528 Francis Quinones, a distant relative of Emperor Charles V, was appointed cardinal and governor of Veroli by Pope Clement VII in recognition of his efforts to promote a reconciliation between the Pope and the Emperor. He placed his elaborate coat of arms on a small fountain outside Porta Romana (you can see it in the image used as background for this page).

(left) Santuario dell'Olivella (in the far distance: Alatri); (right) western side of the Cathedral

Veroli is a bishop's See, and possesses considerable activities, supplying the country around with cloth of a much prized kind woven in coloured stripes. (..) Its streets are narrow and tortuous, many parts of the town absolutely labyrinthine, and full of odd little houses, most of which are built with open galleries. The piazzas were decked out with summer fruits, the cheapness of which was not surprising. At this season the large water-melons are the principal things brought to market, and most excellent they are. Gregorovius
Veroli has some very picturesque sites and its monuments are generally well maintained. The town lost the bishopric in the XXth century and some of its inhabitants still resent that decision.

You may wish to visit nearby Abbazia di Casamari or Boville Ernica.

Other Days of Peace pages:
At the Flea Market
A Sunny Day in Villa Borghese
At the Beach
Voicing Your Views and feeling better!
Eating Outdoors
A visit to Roseto di Roma
Christmas in Rome
Celebrating the Foundation of Rome
The procession of La Madonna de Noantri
Running the Marathon
Watching the Parade
Finding Solace at the Protestant Cemetery
Attending 2007 July Events
Rome's Sleepless Night
Attending Winter Ceremonies
Jogging at Valle delle Camene
Sailing on the River to see the Bridges of Roma
An October Outing to Marino
Attending a Funeral ...and enjoying it!
Embassy-hunting in Parioli
Celebrating Eritrean Michaelmas in Rome
Visiting Rome at Dawn
Visiting Rome in the Moonlight
Visiting Rome on a Hop-on-Hop-off Bus
Visiting Multi-ethnic Rome
Baroque Fireworks
Playing in the Snow at the Janiculum
Watching the Pride Parade
Visiting the Movie Sets at Cinecittà
Reading Memoirs of Hadrian at Villa Adriana
Looking up at the Ceilings of the Vatican Palaces
Reading Seneca at the Baths
Spending the Last Roman Day at St. John Lateran's Cloister
Reading Ovid at St. Peter's
Walking the Dog at Valle della Caffarella
Keeping up with new discoveries at Museo Ninfeo