Velletri
(a detail of G. Vasi's Grand View of Rome)

Volsci devictis Veliternus ager ademptus: Velitras coloni ab urbe missi et colonia deducta. The Volsci, having been conquered, were deprived of the Veliternian land; colonists were sent from the City to Velitrae and a colony was planted.
Livy - Ab Urbe Condita - Book II - Translation by B. O. Foster 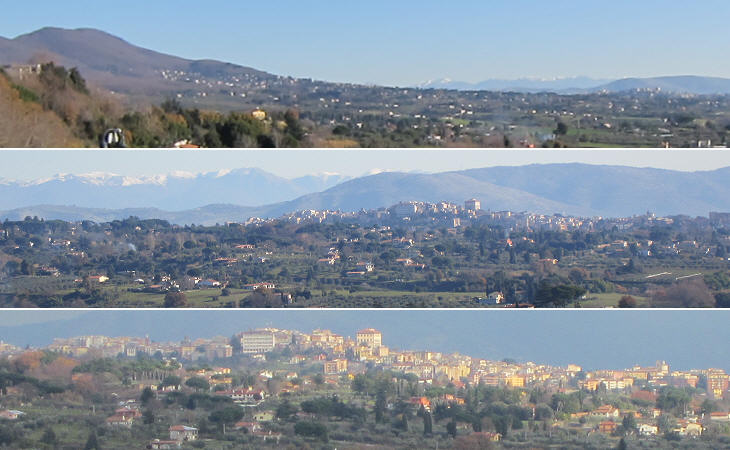 Velletri is located at the southern end of the volcanic area known as the Alban Hills which in antiquity was populated by the Latins, the Italic tribe to whom Romulus, the mythical founder of Rome, belonged. The inhabitants of Velletri (Lat. Velitrae) however were Volscans. Rome preferred to populate Velletri with its own citizens, so that it could rely on their loyalty, because the town stood on a commanding position and because the Volscans were ferocior ad rebellandum quam bellandum gens (they fought with greater courage in a rebellion than they did in a war) Livy - Book VII. 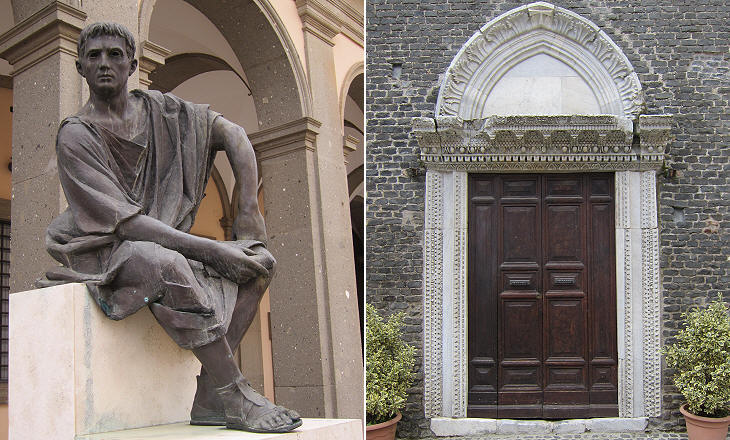 (left) Modern statue of Octavian/Emperor Augustus by Giancarlo Soprano on the steps of Palazzo Comunale; (right) portal of S. Antonio made up of ancient entablatures

Though in imperial times the place had a certain importance (..) the principal existing remains are all mediaeval.
Augustus J. C. Hare - Days near Rome - 1875
Livy highlighted the Roman origin of the inhabitants of Velletri because Emperor Augustus spent his early life and probably had been born there.
Velletri was a prosperous town; inscriptions and literary sources tell that it had many temples, that the forum was located near the current cathedral and that it included a theatre. Memories of that glorious past can be seen almost only at the local archaeological museum where a spectacular sarcophagus which was found in the 1950s is on display. 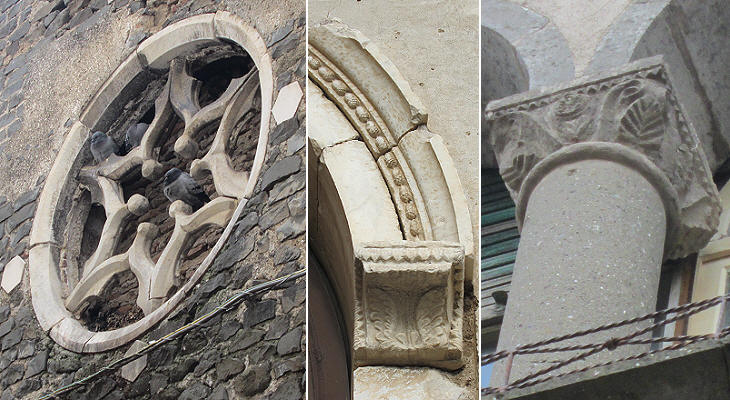 Velletri was crossed by Via Appia and because of its position on a hill it blocked the passage of an army coming from the south and on its way to Rome. The town was surrounded by walls (entirely lost) and its coat of arms includes a gigantic tower (perhaps Porta Napoletana) surrounded by the motto: Est mihi libertas papalis et imperialis (I have been given freedom by the pope and the emperor) which indicates that during the Middle Ages, unlike many other neighbouring towns, Velletri was not the fief of powerful families such as the Colonna or the Savelli, but a Comune (free town). 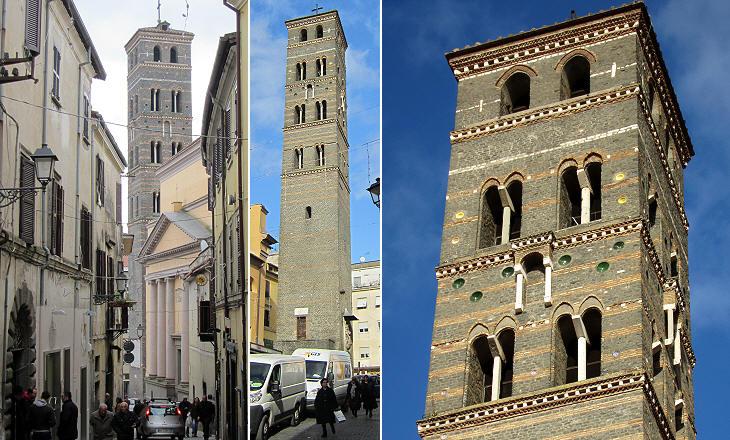 In 1354, when the popes resided at Avignon and even in Rome there was a major attempt to establish a Comune, the inhabitants of Velletri completed the construction of a very tall tower which was meant to symbolize the independence of their town. Eventually it became the Romanesque bell tower of an adjoining church which has been rebuilt several times.
Torre del Trivio, in addition to ceramic dishes which can be seen in some Roman bell towers of the same period such as that of SS. Giovanni e Paolo, was decorated by alternate layers of bricks and black volcanic stones; this technique (opus listatum) was developed during the Late Empire. Opus listatum was utilized also for the decoration of the town's cathedral (or duomo). Italian Comuni competed for having the largest cathedral and the tallest municipal tower and also Velletri did not hesitate to build a large cathedral above an ancient Roman basilica. In 1656 the bell tower partially collapsed and it was hastily rebuilt. The cathedral does not have a façade, but a side entrance flanked by two long porches. Velletri retained its municipal institutions until the XVIth century, but already in the previous century papal control over the town became more stringent. According to a XIIth century bull the see of Ostia, the harbour of ancient Rome, was assigned to the Dean of the Sacred College of Cardinals. Ostia however was a rather miserable hamlet in a very unhealthy location and because of this the diocese of Ostia was joined with that of Velletri; many cardinals chose to reside in this town and they embellished its cathedral. (left) Renaissance portal of the side entrance; (centre) detail of its decoration; (right) 30 April 2022: crowd attending Mass on the vigil of the first Sunday of May in honour of Madonna delle Grazie; since 1613 a candle-light procession is held on the evening of the vigil

We were present on Easter Sunday, when the existing archbishop performed high-mass in the presence of thousands of countrywomen, kneeling in their white and brown panni, and the sight was very imposing and impressive. Hare 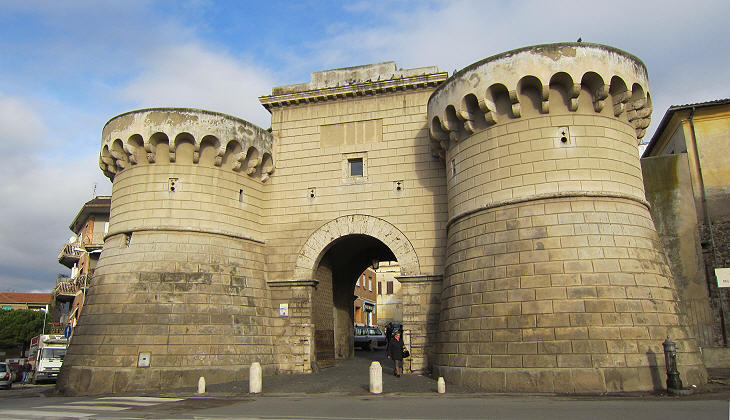 With the development of gunpowder and cannon medieval fortifications became obsolete: in 1511 the southern gate of Velletri was redesigned and strengthened by the addition of two large round towers. Porta Romana, the northern gate of the town did not require to be strengthened and in 1573 it was redesigned by il Vignola, but it was pulled down in the XXth century to facilitate the passage of cars. 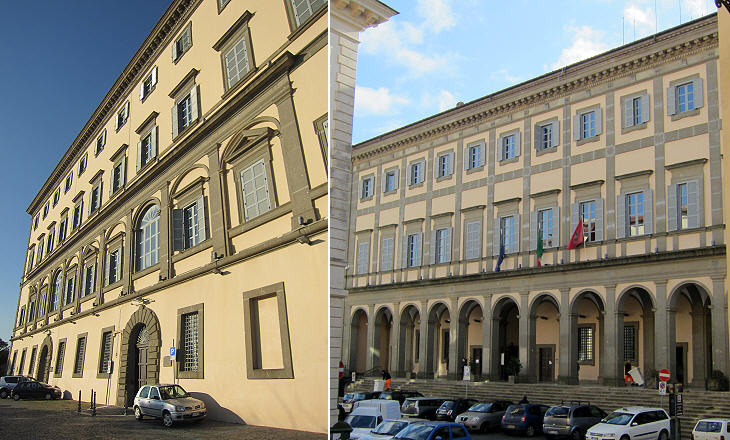 Palazzo Comunale: (left) western side with the entrance to the museum; (right) eastern side

Velletri retained some municipal magistrates until 1591 when all powers were entrusted to the town's bishop. Palazzo Comunale was designed by il Vignola and completed by Giacomo della Porta. It stands on the highest point of Velletri and it is visible from a great distance; it was rebuilt dov'era e come era (where and how it was) after its destruction during WWII. 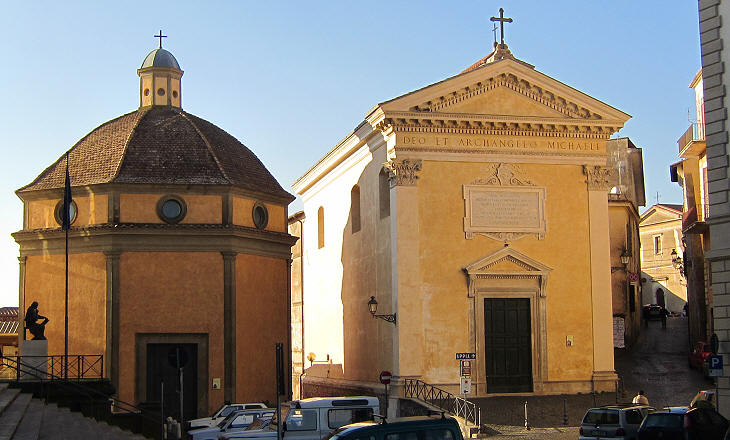 The square in front of Palazzo Comunale is embellished by two small churches (and a third one is visible not far away). Oratorio di S. Maria del Sangue is an elegant Renaissance chapel built to house a sacred image on a wall which in 1516 cried tears of blood (It. sangue). The event was thought to be a bad omen and when a few years later a plague struck the town, it was decided to build this small chapel. Octagonal buildings are typical of baptisteries (see that of S. Giovanni in Laterano), but also of buildings celebrating the end of a pestilence such as S. Rocco at Bagnaia.
S. Michele Arcangelo was built in the XIXth century on the site of a medieval church. Its design and size fits well with that of the nearby oratory also thanks to its Renaissance portal. 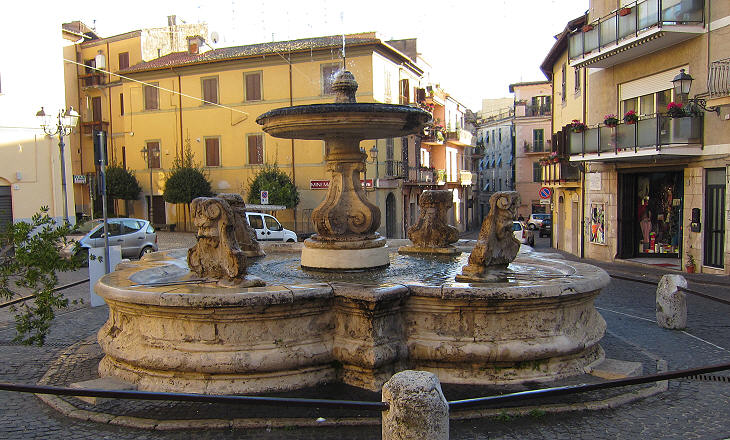 [One or more leaves are here wanting in Mr. Evelyn's MS. descriptive of his leaving Rome.] Thence to Velletri, a town heretofore of the Volsci, where is a public and fair statue of P. Urban VIII., in brass, and a stately fountain in the street. Here we lay, and drank excellent wine.
John Evelyn's Diary and Correspondence - 1645
The aqueducts built by Pope Sixtus V (Acqua Felice in 1587) and Pope Paul V (Acqua Paola in 1612) made Rome famous for its abundance of water and its fountains. In 1612 Giovanni Fontana, an engineer who worked with his brother Domenico at the construction of the two aqueducts, built an aqueduct which from Mt. Artemisio (a mountain named after goddess Artemis/Diana who was worshipped at Ariccia and Nemi) carried water to Velletri. In the following years three fountains were built to distribute the water. Their design follows the pattern established by Giacomo Della Porta in many Roman fountains. The statue of the Pope was destroyed by the French in 1798. 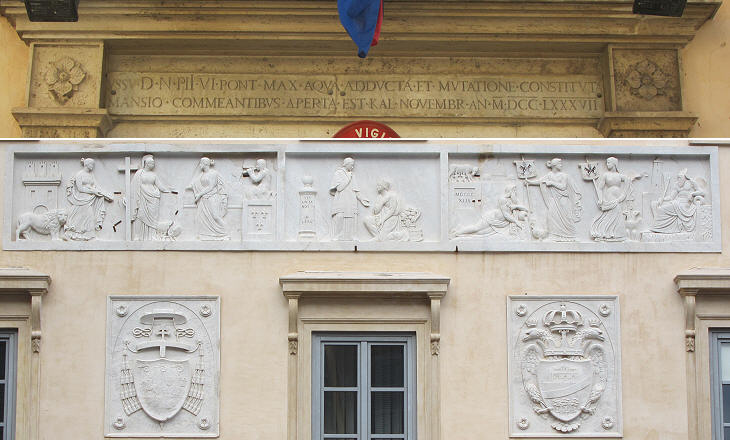 (above) 1787 inscription celebrating the opening of a comfortable inn for travellers along Via Appia by Pope Pius VI; (below) reliefs celebrating the role of Velletri as capital of Priovincia Marittima and the return of Pope Pius IX from his exile in the Kingdom of Naples

Velletri, February 22, 1787 I am writing this in a very miserable inn and am too tired and uncomfortable to write any more (read more about Goethe's stay at Velletri).
J. W. Goethe - Italian Journey - translation by W. H. Auden and Elizabeth Mayer.
If Goethe had travelled at the end of that same year he could have stayed at a much more comfortable place. Pope Pius VI made several improvements to Via Appia and he reclaimed the land along the road, in particular at Terracina. He knew that many travellers would have chosen to reach Naples by Via Appia rather than by following the inland road and he therefore promoted the construction of a new inn which was inaugurated in November 1787.
The importance of the town grew in 1832 when, thanks to the action of Cardinal Bartolomeo Pacca, Velletri became the capital of Provincia Marittima which included the Pontine Marshes and the towns between Velletri and Terracina. A few years later Pope Pius IX increased the territory reporting to Velletri by adding some inland towns such as Anagni and Alatri to it. In 1863 a railway linked Rome to Velletri and shortly after to Naples. 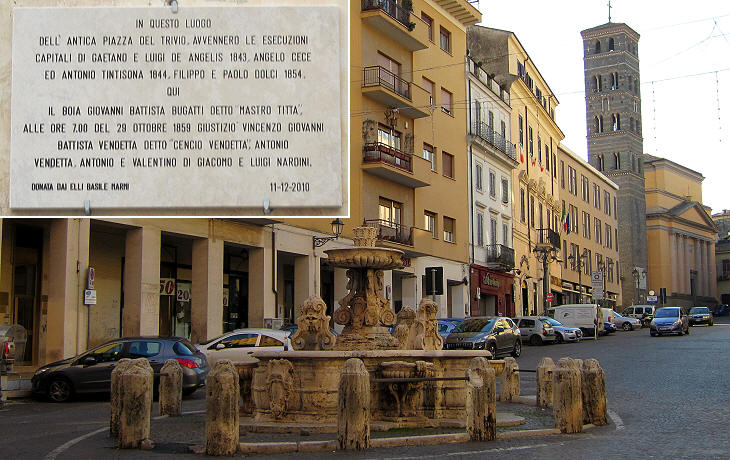 Piazza Cairoli (once Piazza del Trivio), the site where brigands were executed, and another XVIIth century fountain; (inset) a plaque mentioning some executions

The inhabitants of Velletri were formerly famous for their brigand tendencies: now they are most inoffensive. Hare
In 1850 Velletri had approximately 12,000 inhabitants and it was the most important town of the Papal State south of Rome. One of the privileges its inhabitants had was that they could attend beheadings which took place in a central square (you may wish to read a description by Charles Dickens of a beheading which he saw in Rome).
Cencio Vendetta was one of the brigands executed in the square. He has become a local folk hero because in 1858 he dared to steal a sacred image in the cathedral. By returning the image he hoped his many crimes would be pardoned, but he was arrested and beheaded together with his brother. 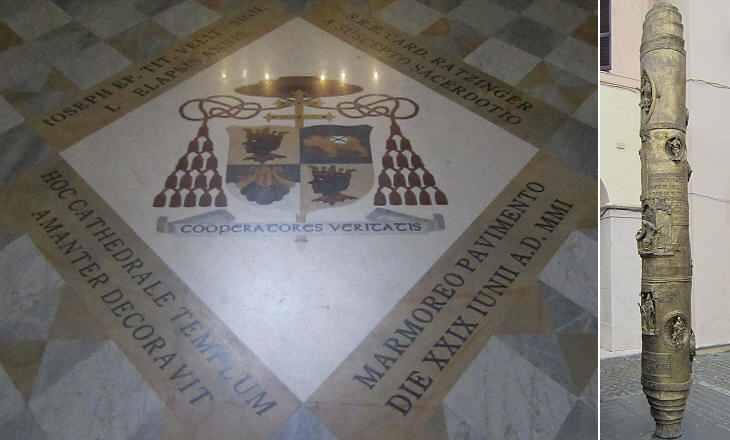 S. Clemente (Cathedral): (left) coat of arms of Cardinal Joseph Ratzinger celebrating the fiftieth anniversary of his ordainment; his motto (Co-workers of the Truth) is taken from the Third Epistle of John; in 1914 the diocese of Velletri was separated from Ostia and in 1981 it was combined with that of Segni; (right) bronze column donated by the German bishops to Pope Benedict XVI (Cardinal J. Ratzinger)

Overall the town and its monuments were not regarded as having a particular historical or artistic relevance. This explains why its reconstruction after WWII did not care much about recreating its previous aspect. Velletri, in particular, was significantly damaged in the period which followed the landing of the Allies on the beaches of Anzio in January 1944. 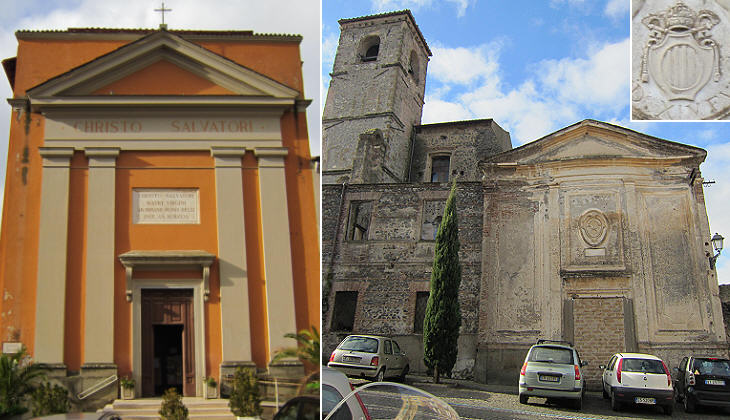 S. Salvatore and some other churches were rebuilt in new forms, but other monuments such as Palazzo Ginnetti were completely pulled down and replaced by modern buildings, while a large Franciscan monastery and an oratory near S. Lorenzo were left to rot.
The image used as background for this page shows an elaborate door handle near S. Salvatore. 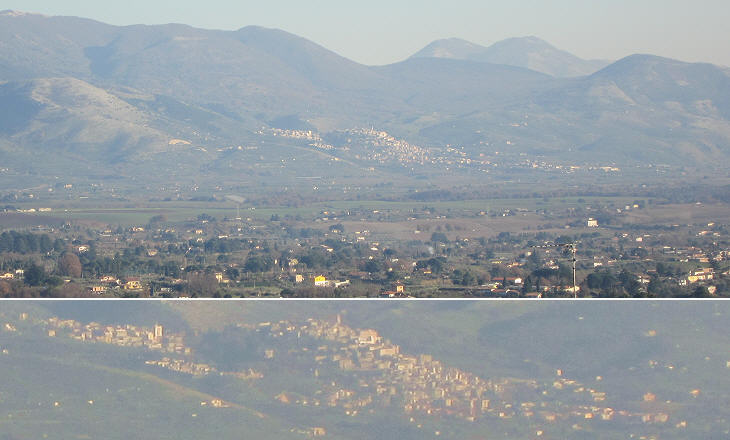 Next step in your tour of the Environs of Rome: Cori (and the Volsci Mountains) seen from Velletri (before you should visit the archaeological museum of Velletri)