Ponte Mammolo
(Vasi at work in the Grand View of Rome)

Links to this page can be found in Book 5 and Environs of Rome. 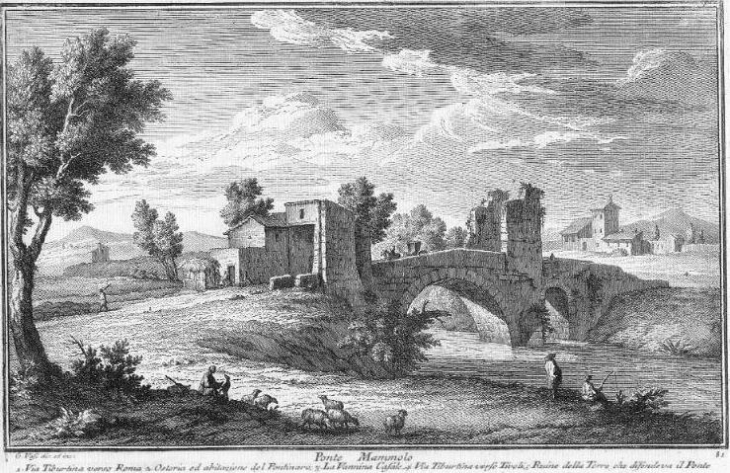 Giuseppe Vasi opened his 1754 book covering the monuments along the River Tiber with three etchings showing the bridges which crossed the Aniene or Teverone, a tributary coming from Subiaco and Tivoli and joining the Tiber north of Ponte Milvio. Via Tiburtina, the road leading to Tivoli, crosses the Aniene twice; Vasi chose to show Ponte Mammolo, the bridge nearer to Rome, although Ponte Lucano, the other bridge, offered a more evocative view because of a nearby ancient mausoleum. He showed the latter in a small etching in the opening page of the book.
In the description below the plate Vasi made reference to: 1) Via Tiburtina towards Rome; 2) Tavern and house of the custodian; 3) La Vannina (a farmhouse); 4) Via Tiburtina towards Tivoli; 5) Ruins of the tower protecting the bridge. The small 1920 map shows the sites of 1) Ponte Mammolo; 2) S. Francesco a Settecamini; 3) Ponte Lucano; 4) Tor Cervara. 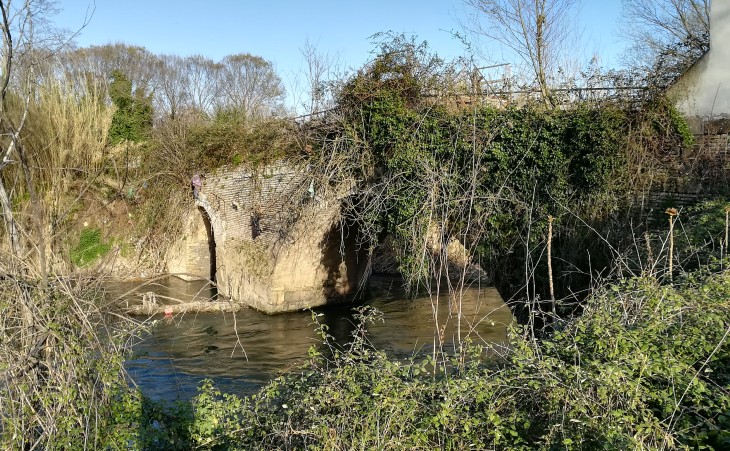 The view in March 2019 (courtesy of Mauro Mura)

The ancient bridge, which already at Vasi's time was in a rather poor state, was so greatly damaged in 1849 during the events related to the Defence of the Roman Republic by Giuseppe Garibaldi that it was replaced by a new bridge a few hundred yards downstream.
The name of the bridge is usually thought to derive from Julia Mamaea, mother of Emperor Alexander Severus, who restored it. Similar to Ponte Nomentano and Ponte Salaro, two other bridges over the Aniene, it was damaged during the Greek-Gothic War and rebuilt and fortified by the Byzantines at the end of it. 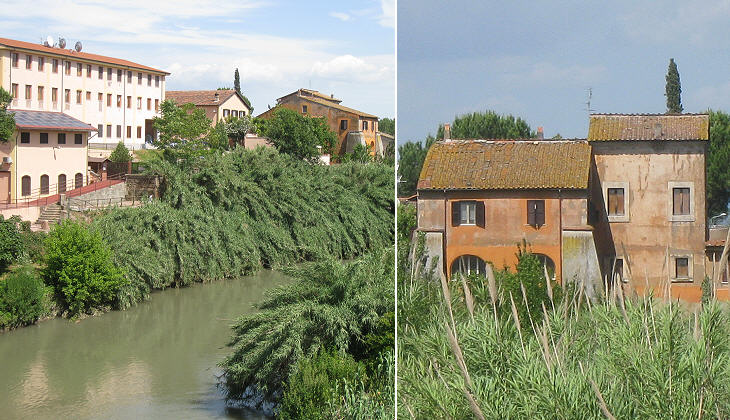 Casale la Vannina, the farmhouse shown in the etching, was not damaged by war events and it helps in exactly locating the site of the ancient bridge, the ruins of which are hidden by vegetation.
The bridge was described in detail by Rev. Jeremiah Donovan in Rome Ancient and Modern - 1844
The Ponte Mammolo presents two different constructions with several subsequent repairs. Originally it had been constructed of quadrilateral blocks of tufa, and consisted of a large central and two small lateral arches, the curves of which are built of travertine, constructed in the last period of the Republic; but the central arch was rebuilt in the VI. century of our era, and presents the same masonry as the ponte Nomentano and ponte Salario, whence it would appear to have been rebuilt, like them, by Narses, after its destruction by Totila, mentioned by Procopius. Traces of the marble battlements of Narses still remain; and on the side to the right, by descending towards the river, we observe a stone with the letters ENTVL well chiseled on it, a fragment of some more ancient edifice, the use of which is an additional proof that the arch was built at the period and under the circumstances just mentioned. 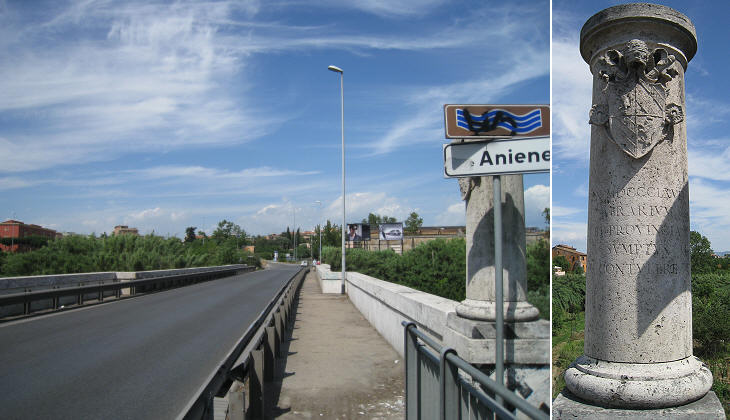 A new bridge was built by Pope Pius IX, but it was damaged on purpose in 1867 to prevent an attempt by Garibaldi to enter Rome; the current bridge is the result of later modifications. 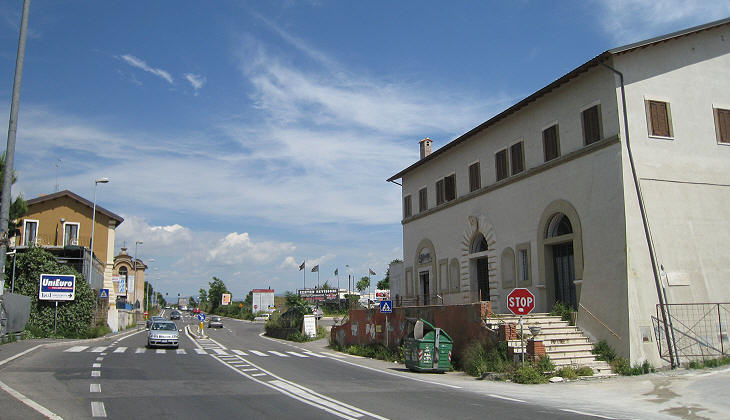 Via Tiburtina at Settecamini with two farms at the sides of the road and S. Francesco a Settecamini in the background (Osteria del Fornaccio is on the right side)

Today Settecamini is a modern borough of Rome along Via Tiburtina; its name (literally seven chimneys) is associated with the legendary martyrdom of seven Christian brothers by Emperor Hadrian in connection with the construction of his nearby villa. In the XVIth century the area belonged to the Cesi family who built a farm opposite a previous one; the farm became known as Osteria del Fornaccio as it housed an inn and a bakery. The Cesi had extensive possessions in Umbria; the property of Settecamini was eventually acquired by the Torlonia who in the last period of the Papal State owned almost all the countryside surrounding Rome. 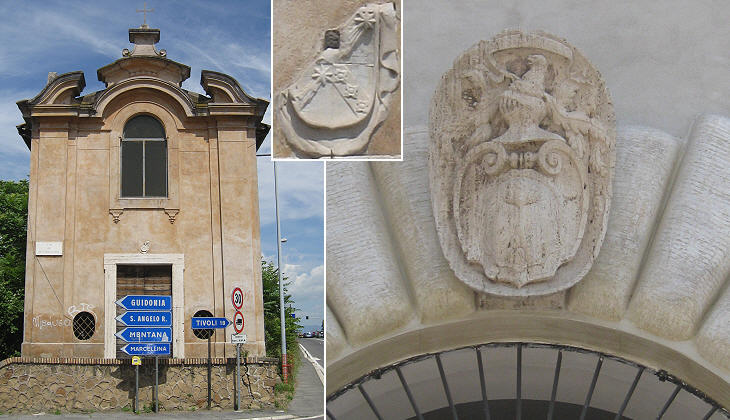 A small but elegant baroque church was built in 1728 for the inhabitants of the farm and for the travellers along Via Tiburtina. 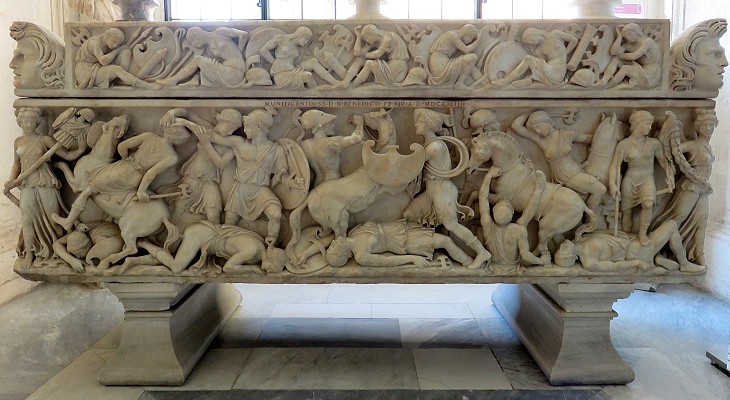 This fine sarcophagus was found in 1744 at Salone, south of Settecamini and it was donated to the City of Rome by Pope Benedict XIV. Consistent with the usage of the time missing parts were replaced by new ones. It shows three scenes of undecided fight, but the outcome of the battle is indicated by the bodies of the Amazons on the ground and by the decoration of the lid. The relief shows the pelta, the typical shield of the Amazons which eventually became a decorative pattern (e.g. at Ostia). You may wish to see other sarcophagi depicting an Amazonomachy at Musei Vaticani, at Brescia and in Turkey. 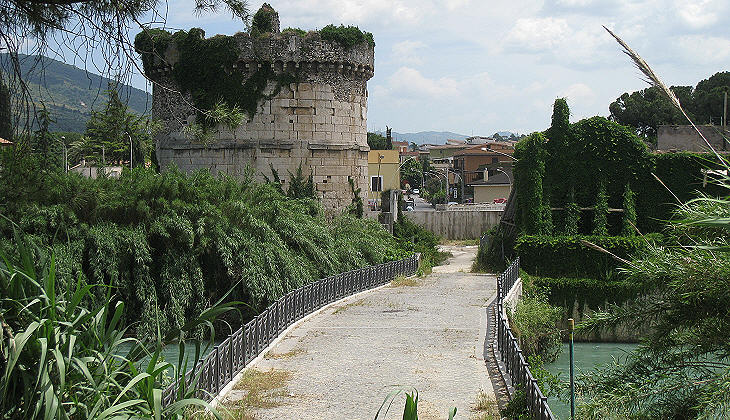 On the 7th May 1645. At about six miles from Rome, we pass the Teverone, a bridge built by Mammea, the mother of Severus, and so by divers ancient sepulchres, amongst others that of Valerius Volusi; and near it pass the stinking sulphureous river over the Ponte Lucano, where we found a heap, or turret, full of inscriptions, now called the Tomb of Plautius.
John Evelyn's Diary and Correspondence
Via Tiburtina crosses the Aniene again a few miles before reaching Tivoli. The bridge is named after Lucanus Plautius whose family mausoleum stands immediately after the river. Giovanni Battista Piranesi dedicated one of his etchings to Ponte Lucano (it opens in another window), but also many landscape painters loved this place (see an 1810 painting by Filippo Giuntotardi - it opens in another window).
Unfortunately the location, which once was very picturesque, today is spoiled by the industrial development of the area between Rome and Tivoli; in addition recent measures aimed at preventing the Aniene from flooding have surrounded the site with a bank which makes it very difficult to reach the bridge. 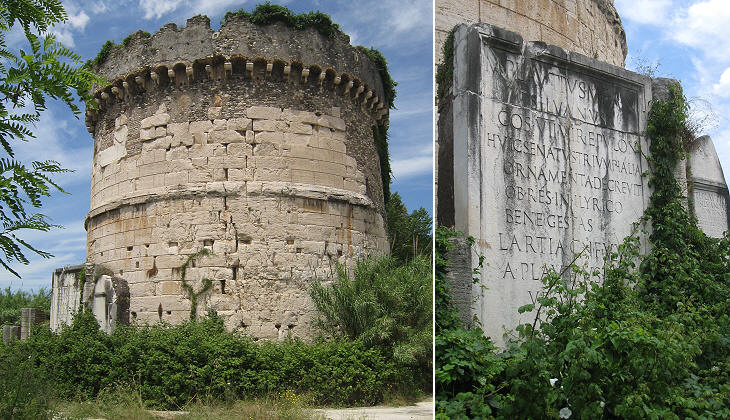 M. Plautius M. F. A. N. | Silvanus | cos. VII vir epulon., | huic senatus triumphalia | ornamenta decrevit | ob res in Ilyrico | bene gestas. | Lartia Cn. f. uxor. | A. Plautius M. F. | Urgulanius | vix. ann. IX, this long inscription is repeated twice and it says that Marcus Plautius Sylvanus, his wife Lartia and his son Aulus were buried in the mausoleum and that Marcus had been consul, septemvir of the Epulones (*) and was honoured by the Senate with the triumphal ornaments for having conducted well the affairs of Illyricum (**).
(*) Similar to Caius Cestius.
(**) A Roman province roughly corresponding to today's Croatia. 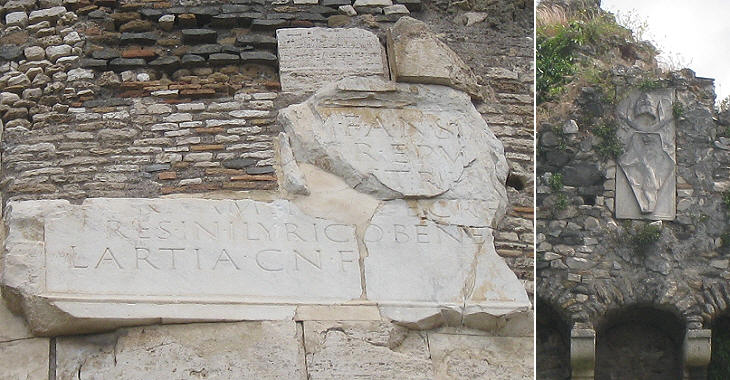 (left) Inscription in the upper part of the mausoleum; (right) coat of arms of Pope Paul II

The mausoleum was built in the Ist century AD and it resembles Sepolcro di Cecilia Metella, Mausoleo di Lucilio Peto and Mausoleo di L. Munatius Plancus at Gaeta; it was turned into a small fortress in the Middle Ages. You may wish to see Piranesi's etching showing the mausoleum (it opens in another window). 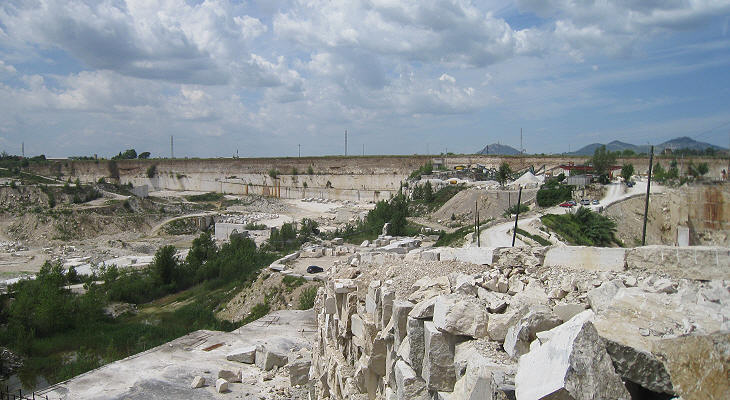 Active travertine quarries near Ponte Lucano; the three hills in the background are S. Angelo Romano, Poggio Cesio and Montecelio

Tor Cervara, a tall medieval tower near an abandoned tufa quarry near Via Tiburtina, was the site of a carnival which was celebrated by the German artists living in Rome on the 1st of May, a day of joy across the Rhine, where they solemnized the new season. Initially the venue of the gathering was Ninfeo di Egeria. It was a sort of burlesque exhibition of pagan rites, to which most of the foreign artists gladly participated. It had its dignitaries, its militia, its corporations of musicians, of high priests, of cooks, of poets, of masters of ceremonies all dressed up in grotesque costumes.
Henri Regnault (1843-1871), a young French painter, took part with his fellow German friends in the ceremonies. Little did he know then that he would lose his life in January 1871, in the war which broke out between France and the German States led by Prussia. 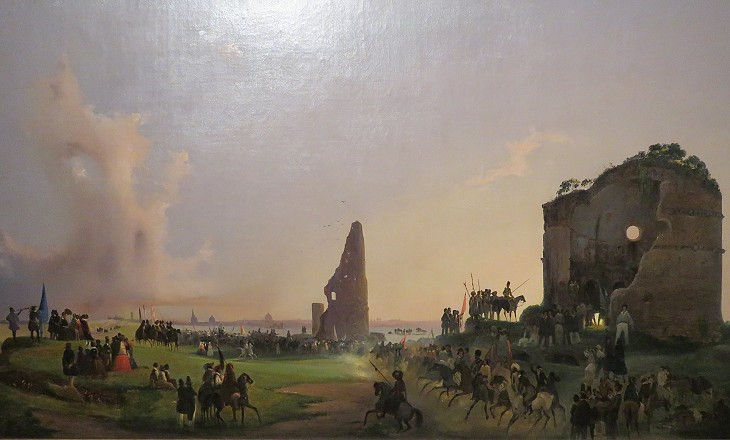 The Torre di Schiavi, on one day in the year, is disturbed from its usual propriety of solitude and silence. It is the custom of the German artists resident in Rome to make this spot the scene, or rather the starting point, of an annual spring festival; combining the character of a picnic and a masquerade. Here is their place of rendezvous in the morning, and of gathering for their return in the evening. Here their first and last songs are sung, and the edicts of their leader are promulgated. On these occasions, the waste region puts on the gayest aspect, and blossoms like a bed of tulips. Some of the artists come in carriages, some on horseback, and some on donkeys. The number and variety of the costumes surpass the wildest visions of an inspired tailor.
George Stillman Hillard - Six Months in Italy in ca 1847-1848
At daybreak the whole band went out by Porta Maggiore, and proceeded towards Tor de' Schiavi on the Via Prenestina, then the procession turned northwards to make its way to the grottos of Cervara. Asses furnished a heroic mount for the participants, they were harnessed in toys from Nuremberg and their riders were clad in garments which made them look like good-men of the woods. The day ended with everybody getting drunk.
You may wish to see one of the first Roman paintings by Caffi (it opens in another window) showing the fireworks at Castel Sant'Angelo and some of his paintings having a historical subject. He died in 1866 in a naval battle of the Third Italian Independence War. 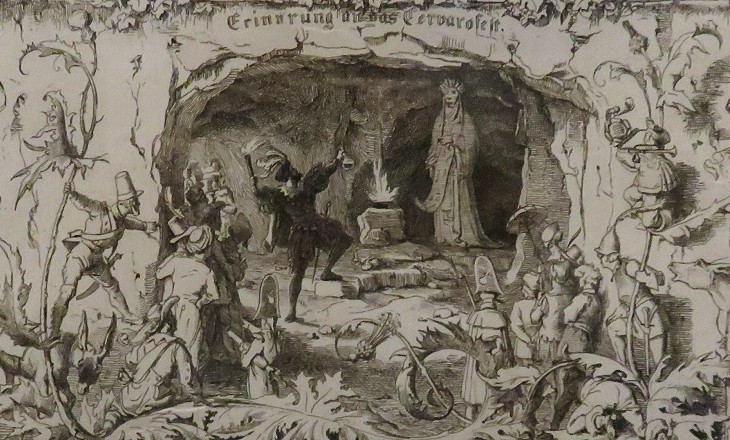 Here the "Festa degli Artisti" is held in May, which is well worth seeing, the artists in costume riding in procession, and holding games, amid these miniature Petra-like ravines.
Augustus J. C. Hare - Walks in Rome - Fifth Edition - 1875
At the time of this edition of the book the festival had been already discontinued.
German artists used to live near S. Isidoro in a street which for this reason is called Via degli Artisti.
Ludwig Haach died in 1842 at the age of 28. This engraving is most likely one of his last works.

Next plate in Book 5: Ponte Nomentano.
Next step in your tour of the Environs of Rome: Tivoli.