Palazzo Altieri
(Vasi at work in the Grand View of Rome) 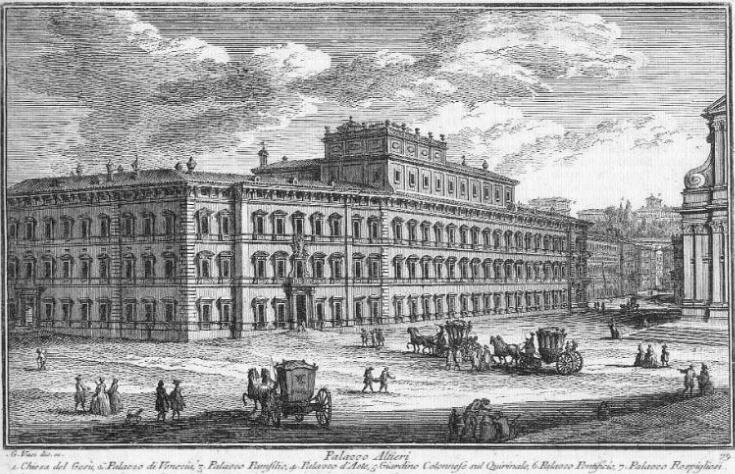 Giuseppe Vasi regarded himself first of all as an architect, although he was not commissioned the design of any major buildings; his etchings are influenced by his interest in architecture: in this 1754 plate in particular he wanted to show all the details of Palazzo Altieri and to do this he disregarded the actual size of the streets and of Piazza del Gesù, the small square in front of the building; the background of the plate shows the Quirinale Hill which cannot be seen from the square.
The view is taken from the green dot in the small 1748 map here below. In the description below the plate Vasi made reference to: 1) Chiesa del Gesù; 2) Palazzo Venezia; 3) Palazzo Panfilio; 4) Palazzo d'Aste; 5) Giardino Colonna; 6) Palazzo del Quirinale; 7) Palazzo Rospigliosi. All these buildings are shown in other pages. The small map shows also: 8) Palazzo Simonetti e Guerra; 9) Convento dei Silvestrini; 10) Palazzo Muti Berardi; 11) Palazzo Altieri. 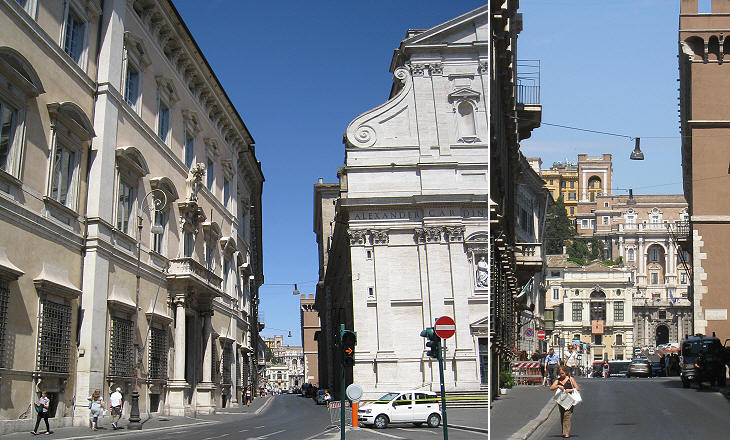 (left) The view in July 2009; (right) close-up image showing Palazzo Venezia to the right and Palazzo Colonna at the end of the street with some trees of Giardino Colonna behind it. The palace with a large loggia adjoining Giardino Colonna is a building designed by Armando Brasini in 1936

Piazza del Gesù was not affected by the changes made in the late XIXth century to allow an easier traffic flow between Piazza Venezia and the Vatican; the space between Palazzo Altieri and il Gesù was not that much, but town planners did not dare to touch the two historical buildings. 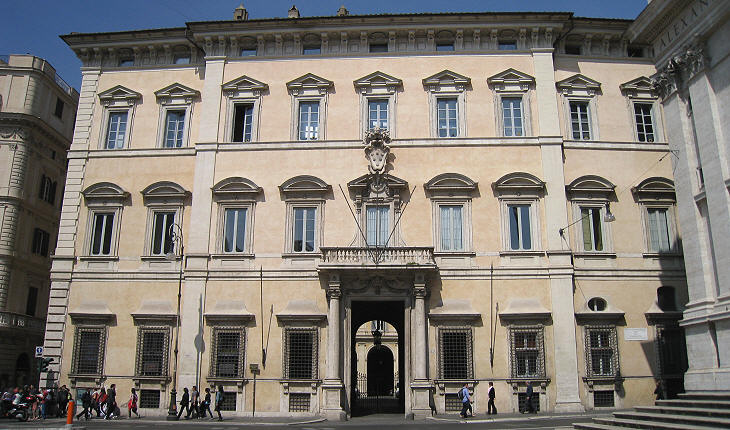 The Altieri owned several buildings in Rione Pigna, including those which were pulled down for the construction of il Gesù in the second half of the XVIth century. In 1643 Giambattista Altieri was appointed cardinal by Pope Urban VIII; he felt his house was not good enough for his new social role and in 1650 he commissioned Giovanni Antonio De Rossi the redesign of the family properties in Piazza del Gesù; Berta, a widow who lived in a small house to the right of the entrance refused to leave and De Rossi found a way to incorporate her home into the design of the new palace (this explains the two small windows above the main ones).
The palace was completed by 1655 when Cardinal Giambattista Altieri died; it did not include the courtyard and it was limited to the section in the square. De Rossi reduced the monotony of the façade by slightly projecting forward its central part, similar to what Gian Lorenzo Bernini did at Palazzo di Montecitorio. 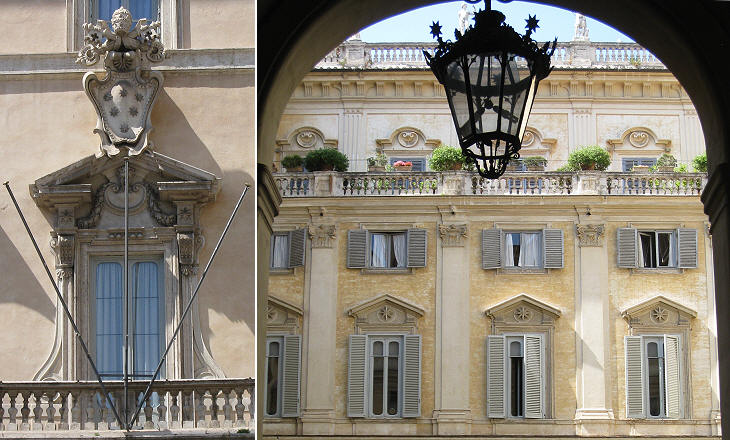 (left) Balcony with the coat of arms of Pope Clement X (which is shown in the image used as background for this page); (right) courtyard

In 1669 Emilio Altieri, a brother of Giambattista, was appointed cardinal by Pope Clement IX and in the following year he was elected pope with the name of Pope Clement X; he was then aged 80, but he lived long enough to finance the enlargement of the family palace.
De Rossi built two major additions: one to the right of the original palace and the other behind it, but he retained as main façade that of his earlier project.

Fountain making use of an ancient sarcophagus which once was in the courtyard of Palazzo Altieri and now is located in the street behind it; in addition to traditional subjects it shows two squirrels eating fruit

The palace of Altieri is a very stately structure, the building of which is said to have cost a million of crowns, and as many the furnishing. (..) The stair-case is very fine. (..) The apartments are large, adorned with rare pictures, and magnificent furniture. In the prince's apartment, you see a large table of Lapis Lazuli; a room painted grotto-wise, which cost 3500 crowns; and a little looking-glass valued at 20,000 pistoles; the frame and back of pure gold weighs fourteen pounds, and is beset with thirteen topaz's, thirty six sapphires, eight diamonds, and a curious knot of emeralds. The library is very numerous and in good order.
Thomas Nugent - The Grand Tour - 1749
Today a portion of Palazzo Altieri is owned by Associazione Bancaria Italiana: the following external link - it opens in a separate window - shows some of its decorated interior.

The entablature of a portal in nearby Via del Gesù was thought to belong to an ancient temple, but it is a fine Renaissance work which is based upon a classical pattern. At the beginning of the street there is an XVIIIth century madonnella. 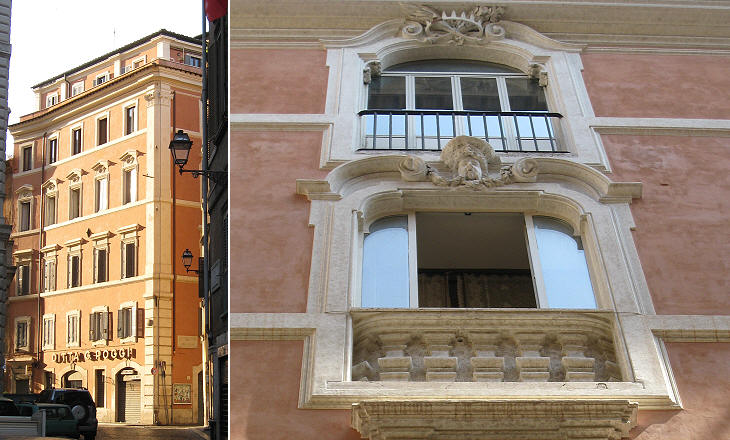 (left) Façade along Via del Piè di Marmo; (right) detail of the windows in Via del Gesù

The Sylvestrines belong to a branch of the Benedictine order which was founded in 1231 by St. Silvestro Guzzolini. In 1563 they were given the church of S. Stefano del Cacco and an adjoining building by Pope Pius IV. In 1734 they enlarged their monastery by adding a new wing which was designed by Ludovico Rusconi Sassi. 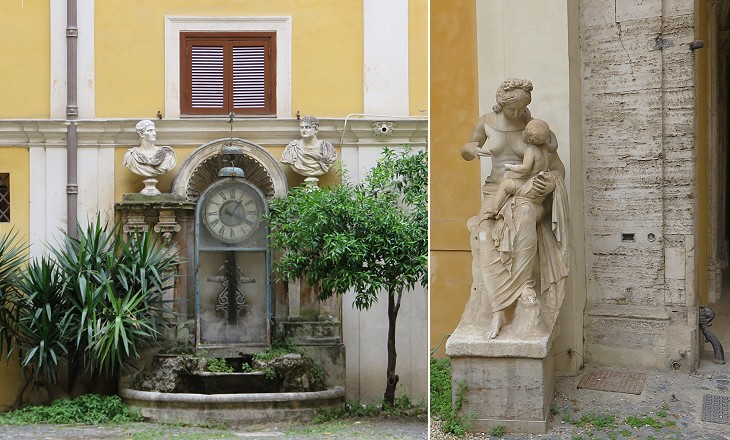 (left) Courtyard with a water clock; (right) a statue in the courtyard

Palazzo Muti Berardi was built in the XVIth century, but because of too many enlargements/modifications it does not retain its original aspect. Its only interest lies in a curiosity: a water clock designed by Father Giovan Battista Embriaco, Superior of Monastero Dominicano della Minerva. It was designed in 1870 and its mechanism is similar to Orologio del Pincio, another water clock by Father Embriaco.