Palazzo Mattei
(Vasi at work in the Grand View of Rome) 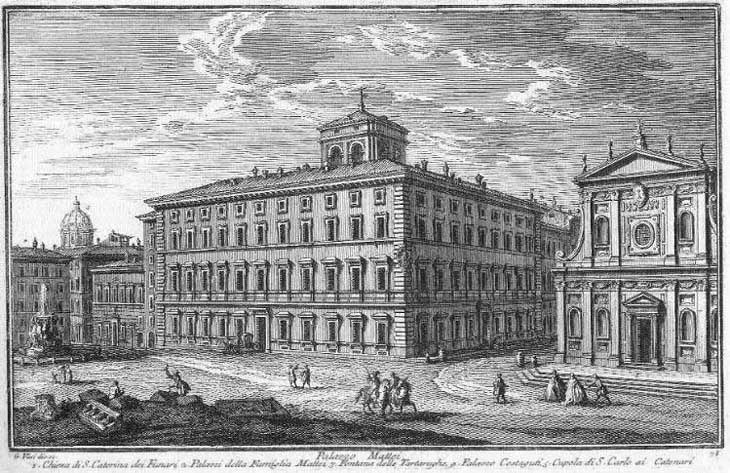 Each of the etchings which Giuseppe Vasi published in ten books between 1747 and 1761 was accompanied by a short text providing some information on the monuments shown in the etchings. The 1754 view of Palazzo Mattei is preceded by an extensive reference to the ruins of ancient Roman buildings which existed in the area (these have now been identified as belonging to Teatro di Balbo). In the plate Vasi showed some ancient columns and lintels in a wide space, which did not actually exist.
The view is taken from the green dot in the small 1748 map here below. In the description below the plate Vasi made reference to: 1) S. Caterina de' Funari; 2) Palazzi della famiglia Mattei; 3) Fontana delle Tartarughe; 4) Palazzo Costaguti; 5) Dome of S. Carlo ai Catinari. 5) is shown in another page. The small map shows also 6) Palazzo Mattei Paganica; 7) SS. Valentino e Sebastiano; 8) Palazzo Patrizi. The yellow 2 indicates Palazzo Mattei di Giove; the red 2 indicates Palazzo di Giacomo Mattei. The dotted lines in the map indicate the borders among Rione Sant'Eustachio (upper left corner), Rione Regola (lower left corner) and Rione Sant'Angelo where all the monuments covered in this page are situated. 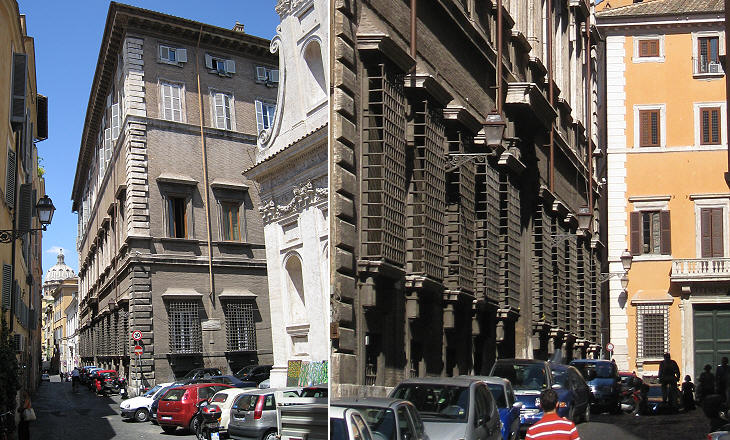 The view at first sight seems very different from the plate, but this is due to the fact that Vasi enlarged the street; otherwise everything is as it was in 1754. Palazzo Mattei can be better seen from the other end of the street. Fontana delle Tartarughe and Palazzo Costaguti are out of sight whereas the dome of S. Carlo ai Catinari is clearly visible. 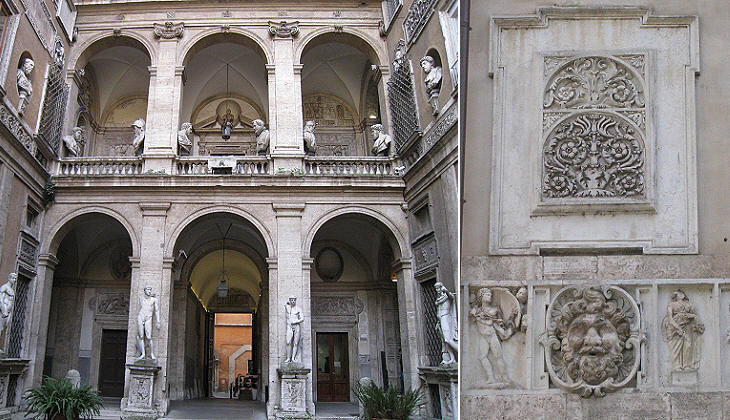 Carlo Maderno designed this palace at the beginning of the XVIIth century for Asdrubale Mattei; its façade has a rather simple Florentine appeal, whereas the courtyard is a tribute to ancient Rome: many busts and reliefs were modified and embellished and per se they are not of great value, but the overall impression is stunning, especially if you happen to discover the palace by chance. The Mattei who owned it had a fief at Giove in Umbria, near Alviano, so the palace is called Palazzo Mattei di Giove to distinguish it from palaces owned by other branches such as Palazzo Mattei Paganica or Palazzo Mattei di Trastevere. 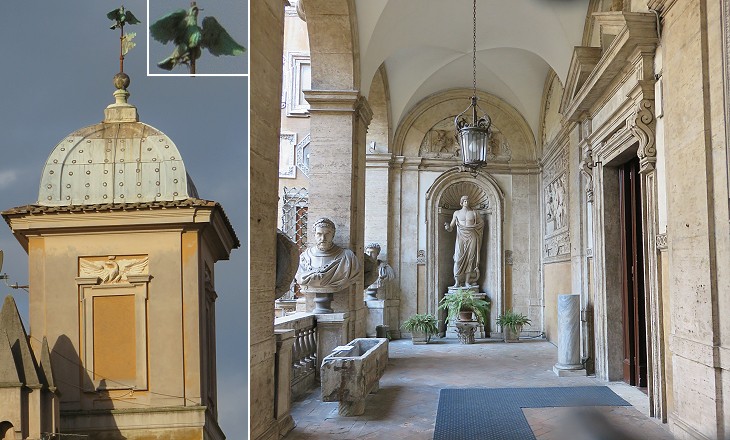 (left) Turret with the heraldic symbol of the Mattei; (right) loggia

The palace was built by Asdrubale Mattei with the financial help of his elder brother Ciriaco who in 1581 had turned a vineyard on the Caelian Hill into one of the most important Roman villas. Girolamo, another brother, was made cardinal in 1586. The Mattei redecorated their chapel at S. Maria in Aracoeli in 1586-1589. In 1595 Asdrubale Mattei married Costanza Gonzaga, of a noble family of northern Italy. 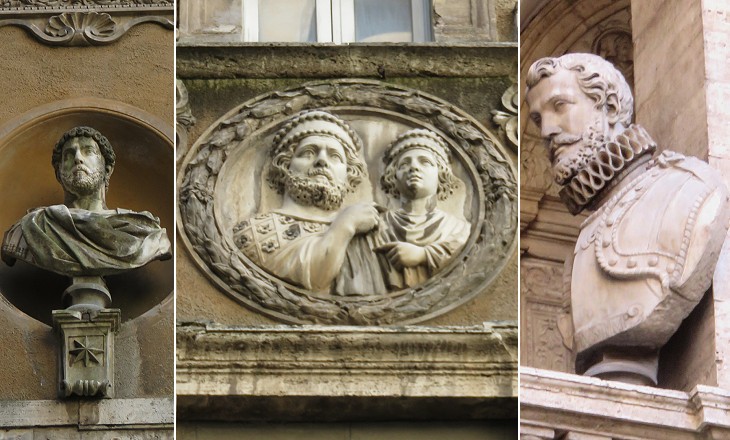 The Mattei became relatives of Ferdinand II of Habsburg, Holy Roman Emperor, when the latter married a Gonzaga in 1622. The decoration of the courtyard was redesigned in order to establish a link between the ancient Roman emperors and the Holy Roman ones. Eight modern busts portraying ancient Roman emperors were placed on the walls of the courtyard and eight busts portraying emperors of the House of Habsburg on the balustrade of the loggia. Eight medallions with modern reliefs depicting Byzantine emperors on the walls of the courtyard established a symbolic link between the two groups of busts. 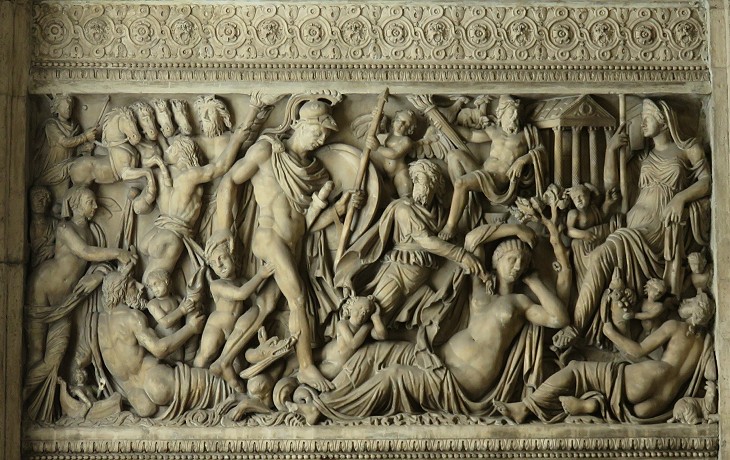 The Mattei were collectors of antiquities which they mainly placed in their villa. Sarcophagi were usually utilized as basins for fountains and the Mattei did so in their palace. Some sarcophagi which came into fashion in the IInd century AD were used to decorate the walls of palaces as if they were paintings. Their fronts did not have references to the dead or more in general to death, but they were entirely covered by a relief depicting a historical or mythological event. 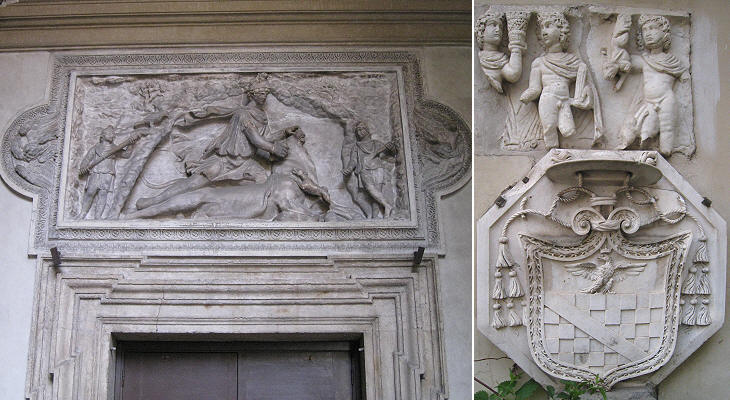 The church is dedicated to St. Catherine of Alexandria, aka St. Catherine of the Wheel because she was tied to a breaking wheel, a medieval tool of torture, before being beheaded. In order to distinguish this church from S. Caterina della Ruota (Wheel) it was referred to as S. Caterina de' Funari after the funari (rope-makers) who worked in the area or perhaps after a Funari family. It was entirely rebuilt between 1560 and 1564 by Cardinal Federico Cesi, who belonged to an important family from Umbria. Its unusual bell tower makes use of an old medieval tower. It is the only major work by Guidetto Guidetti, a Florentine architect who worked with Michelangelo. You may wish to see the church as it appeared in a 1588 Guide to Rome. Museo Nazionale Romano at Cripta di Balbo (which is housed in the former nunnery adjoining the church): (left) supposed coat of arms of the Funari; (right) coat of arms of Monastero di S. Caterina della Ruota 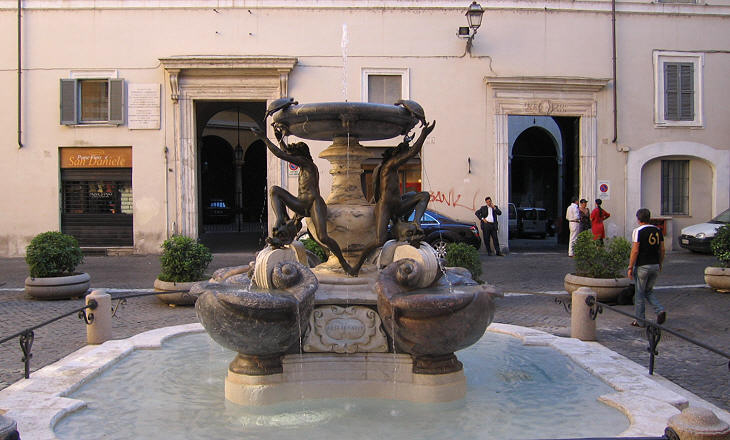 The Mattei initially acquired and lived in two rather simple and small buildings. The courtyard of the house to the right of the fountain was designed towards the end of the XVth century following patterns of Florentine buildings; that of the other house was modified in the XVIth century and again in the XIXth century. 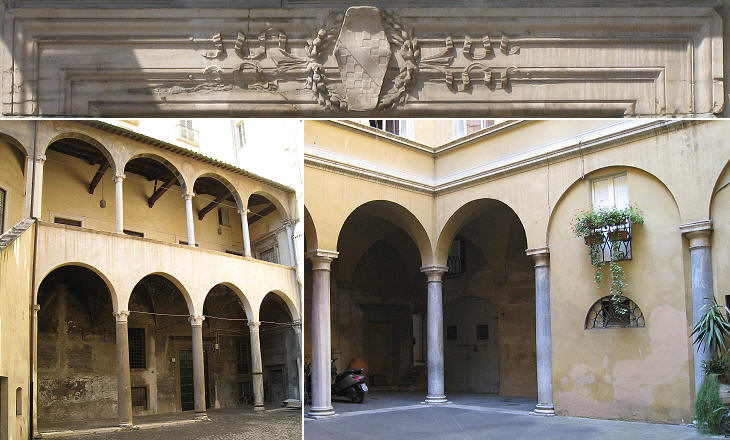 (above) Lintel on the older house (the coat of arms does not show the eagle); (below-left) older courtyard; (below-right) newer courtyard 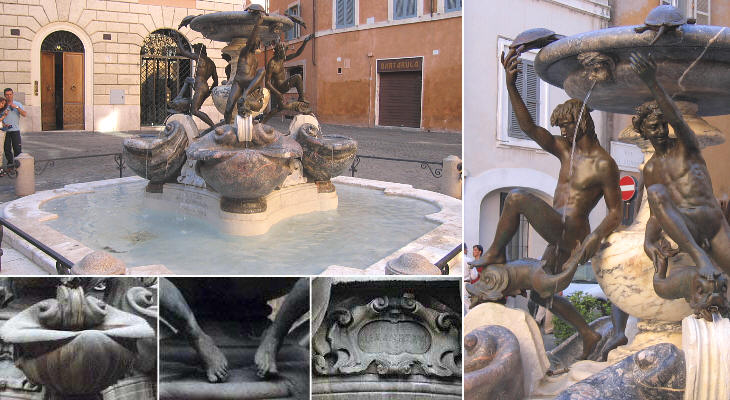 This is one of many fountains designed by Giacomo della Porta in the last decades of the XVIth century; it is the only one which has large sculptures; the bronze figures are by Taddeo Landini, a Florentine sculptor; the four youths were expected to hold four dolphins, similar to those they stand upon, but the project was not completed. In 1658 during a restoration promoted by Pope Alexander VII, four tortoises (see the image used as background for this page) took the place of the dolphins, at the suggestion of either Gian Lorenzo Bernini or Andrea Sacchi: the rationale behind this decision is unclear. 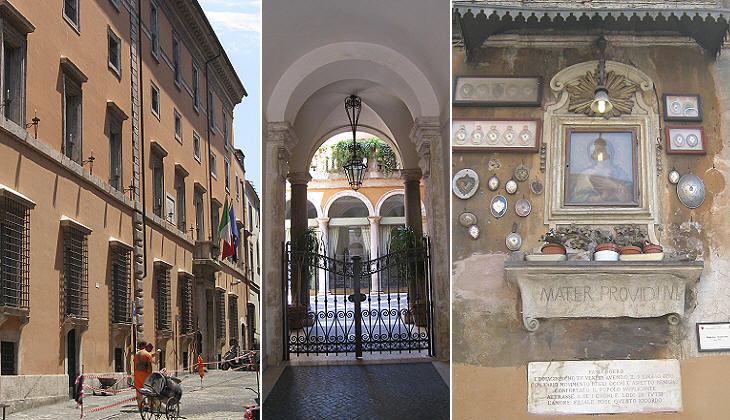 The Mattei owned several buildings forming what was called insula Mattei, in today's words a block of buildings. Palazzo Mattei Paganica, after the fief of Paganica (in the Kingdom of Naples), was built around 1541. Its simple design is embellished by a very decorated cornice showing an eagle, the family heraldic symbol. Although to a much lesser degree than Palazzo Mattei di Giove, also this palace was decorated with reliefs from Roman sarcophagi.
The church of SS. Sebastiano e Valentino which stood in a small square opposite the palace was pulled down shortly after 1870.
One of the most famous Roman madonnelle is located at the corner with Via delle Botteghe Oscure, where the Mattei Paganica had another palace. Next to the sacred image there are several ex-votos, offerings, often in the form of a silver heart, made in pursuance of a vow. The inscription below the image is a short account of a miraculous event which occurred in July 1796, when the French invaded the Papal State: the Madonna turned her eyes and looked towards those who prayed in a benign way. Similar miracles occurred at other sacred images, e.g. Madonna dell'Archetto. 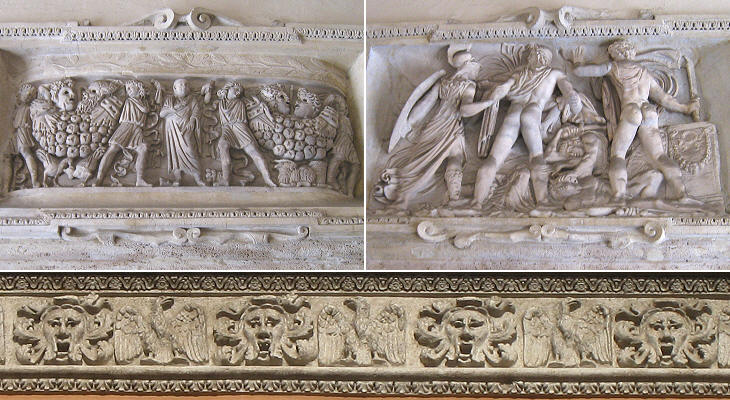 Palazzo Mattei Paganica: (above) two reliefs from sarcophagi; the right one portrays Minerva, Orestes and Pylades; (below) decoration of the cornice

(left) Entrance from Piazza Mattei; (right) windows on the rear part of the building

Palazzo Costaguti was built for the Patrizi in the second half of the XVIth century, but it was renovated in the following century by the Costaguti, a family of Genoese bankers, who bought it in 1578. It still belongs to this family (now Afan de Rivera Costaguti). Its main entrance was in Via della Reginella; it is a large building with some windows overlooking Tempietto del Carmelo.

In 1823 Via della Reginella became part of the Jewish Ghetto and the Costaguti closed the entrance to their palace from that street. 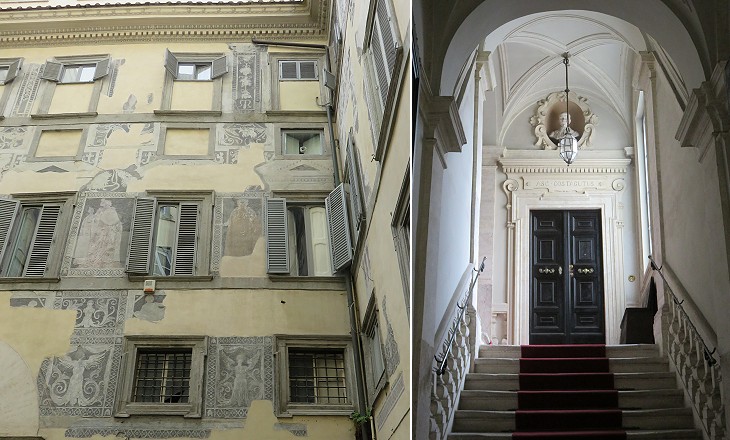 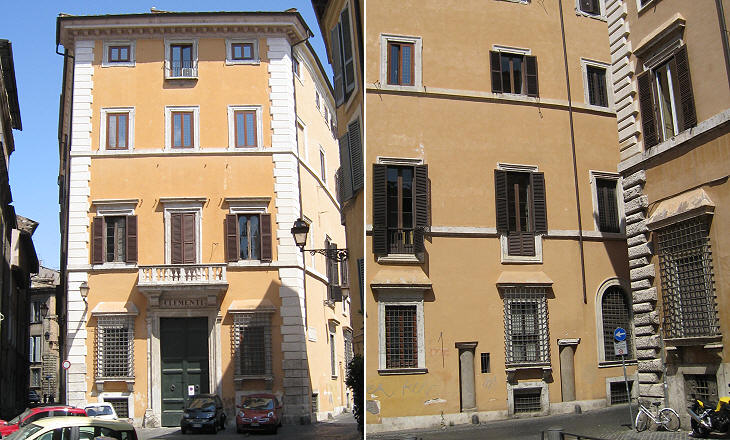 (left) Façade; (right) side view and to the right Palazzo Serlupi Caetani Lovatelli. The two palaces have a side in Piazza di Campitelli

The palace was called Palazzo Patrizi a S. Caterina (it is located opposite the church) in order to distinguish it from Palazzo Patrizi a S. Luigi dei Francesi. It was built in the XVIth century and it was acquired by the Patrizi in 1626. They had also a villa outside Porta Pia. On its right side there are some ancient columns: they belonged to a medieval porch which was subsequently incorporated into the palace. This explanation applies to most of the columns which are visible in the walls of many palaces and houses. In the Middle Ages there were many porches in Rome, made with columns taken from the Roman temples. They all disappeared during the XVIth and XVIIth century with the exception of those being part of a church. 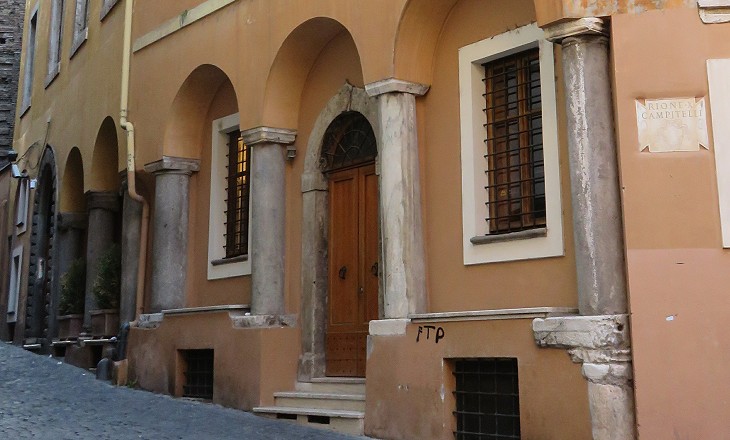 Other ancient columns in a street near Palazzo Patrizi

Next plate in Book 4: Palazzo Altieri.
Next step in Day 5 itinerary: S. Maria in Campitelli.
Next step in your tour of Rione Sant'Angelo: Tor Margana.