Palazzo Pio
(Vasi at work in the Grand View of Rome)

Links to this page can be found in Book 4, Day 7, View C7 and Rione Parione. 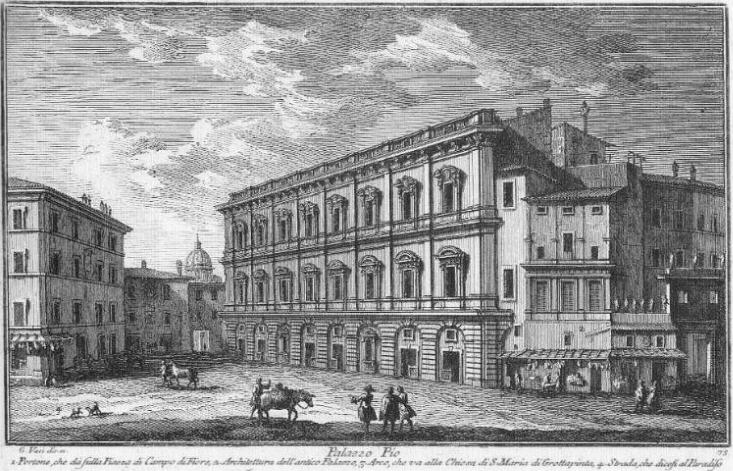 Giuseppe Vasi included Palazzo Pio in his 1754 book of etchings covering the finest palaces of Rome because it was built above the ruins of the first theatre of the ancient city; in the text accompanying this etching and in his 1761 Guide to Rome Vasi spent just a few words on the palace, but he described at length the features and the history of the theatre, which was built by Pompey in 61-52 BC.
The view is taken from the green dot in the small 1748 map here below. In the description below the plate Vasi made reference to: 1) entrance to the palace in Campo dei Fiori; 2) old part of the building; 3) arch leading to S. Maria di Grottapinta; 4) Strada del Paradiso (after the name of a medieval inn). The small map shows also 5) S. Maria di Grottapinta; 6) Teatro di Pompeo; 7) S. Andrea della Valle, the dome of which is shown in the plate. The view in June 2009; (inset) detail of the 1593 map of Rome by Antonio Tempesta showing the palace when it belonged to the Orsini

By professional background Giuseppe Vasi was an architect, not a real life painter, so he was very good at drawing a complete building, even though he could not see all its sides; from Campo dei Fiori (where the photo above was taken) the view of the 1667 façade of Palazzo Pio is very askew, while the old part of the building is not visible from Piazza del Biscione, the small square in front of its 1667 façade. 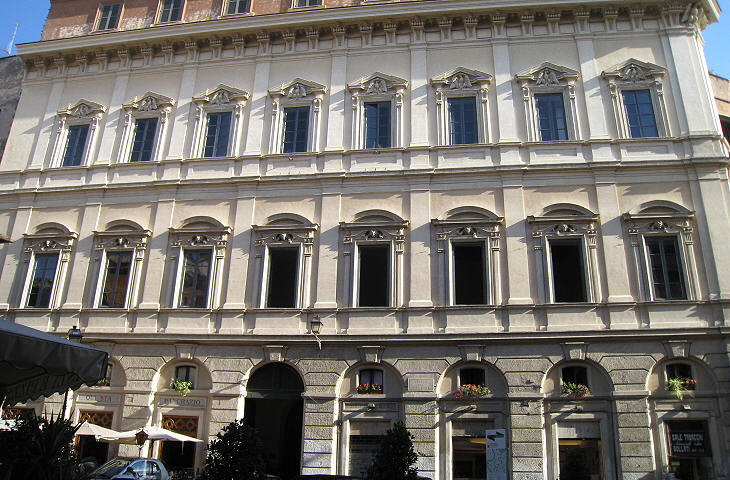 When the palace belonged to the Orsini it had a very tall tower with a clock and most likely a coat of arms of the family, which is at the origin of the name given to the small square in front of the 1667 façade; one element of the Orsini's coat or arms (it opens in another window) is a biscia (grass snake) hence Biscione. The Orsini sold their palace to the Pio di Savoia who commissioned Camillo Arcucci a new façade in Piazza del Biscione. The Pio were a noble family from Carpi near Bologna and they had only a very distant relationship with the Dukes of Savoy, who became Kings of Italy in 1861.

Details of the windows

The decoration of the new façade was based on the heraldic symbols of the Pio di Savoia; while the eagles are portrayed in a very formal posture, the lions seem full of life. At approximately the same time the Pio enlarged their Roman palace, they bought the fiefdom of S. Gregorio da Sassola where they built a new quarter which is still named after them. 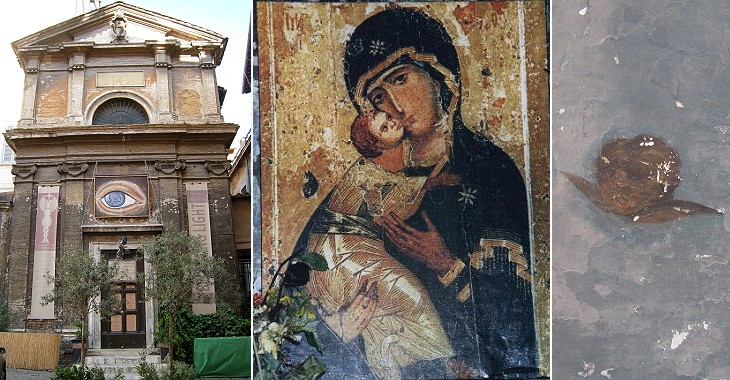 (left) S. Maria di Grottapinta (it houses an art gallery); (centre) sacred image which used to be inside the passageway; (right) detail of the passageway decoration

Grottapinta means painted cave and is a reference to the paintings on the ceiling of the passageway, a structure of the ancient theatre, which from Piazza del Biscione leads to the church; in 1599 the medieval building was restored by the Orsini, who placed their coat of arms at the very top of the façade (you can see it in the image used as background for this page).
The church, which was a "branch" of S. Lorenzo in Damaso, has been deconsecrated for a very long time. 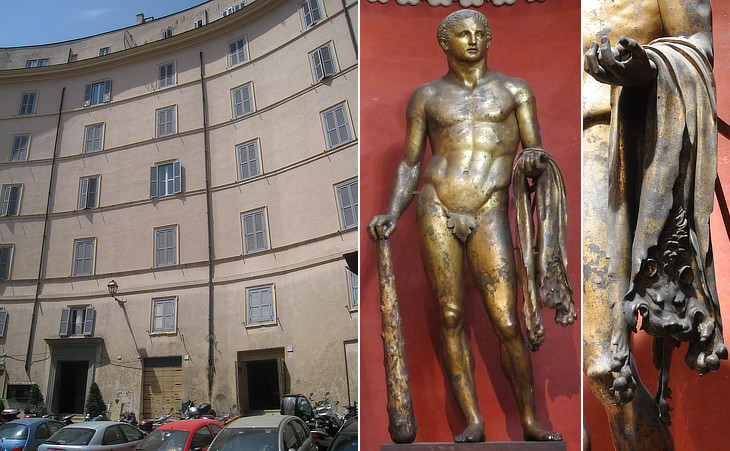 (left) Building and street (Via di Grottapinta) which retain the bent shape of the theatre; (centre/right) statue of Hercules found in 1864 near Palazzo Pio and now at Sala Rotonda of Museo Pio-Clementino (see another gilded statue of the demigod which was found near "Tempio di Vesta")

At the time of the Roman Republic, the Senate was wary that leisure would weaken moral standards and a law was passed which prohibited the construction of permanent theatres; Pompey, after having defeated the pirates who threatened trade routes in the eastern Mediterranean Sea, wanted to celebrate his victory (and to increase his popularity) by giving the Romans a proper theatre; in order to circumvent the law he officially built a Temple to Venus Victrix (Venus the Victorious) which was placed at the top of the auditorium. A temple can be noticed in some later theatres in provincial towns, e.g. Verona.
The colossal Hercules (..) is remarkable more from having been an oracular statue than from its beauty. Very few persons are acquainted with the most striking feature of this Hercules. I mean, very few persons know of the existence of a hole in the back of the head, thirty-eight centimetres in diameter, through which a full-grown youth could easily make his way into the colossus (as at the Temple to Serapis at Pergamum). The experiment was actually made by a young mason, named Pietro Roega, in November, 1864; (..) and the sound of his voice, in answering the questions addressed to him, was really impressive and almost supernatural.
Rodolfo Lanciani - Ancient Rome in the light of recent discoveries - 1888 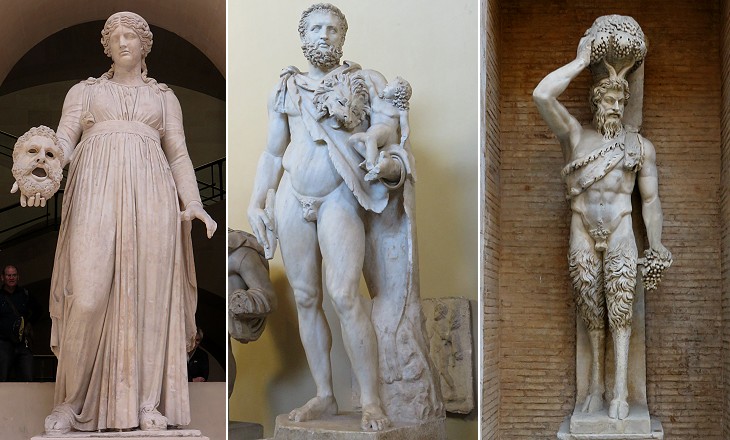 Statues from the theatre which were found towards the end of the XVth century: (left) Louvre Museum in Paris: Melpomene, Muse of Tragedy; (centre) Musei Vaticani: Hercules and his son Telephos, similar to one in the Borghese Collection at the Louvre; (right) Musei Capitolini: Pan or a Satyr

The theatre was not limited to the site for the performances, but it included a large courtyard surrounded by porticoes; its eastern side was unearthed in 1929 near S. Nicola dei Cesarini; according to historians Julius Caesar was stabbed to death at the entrance to the courtyard near a statue of his friend and rival. The complex of buildings was impressive for the columns, marbles and statues which decorated it; the theatre was restored several times, the last one by Theodoric in 510; some of its granite columns were eventually used for the courtyard of Palazzo della Cancelleria.

Next plate in Book 4: Palazzo Massimi.
Next step in Day 7 itinerary: Campo dei Fiori.
Next step in your tour of Rione Parione: Santa Barbara dei Librai.