Palazzo Borghese
(Vasi at work in the Grand View of Rome) 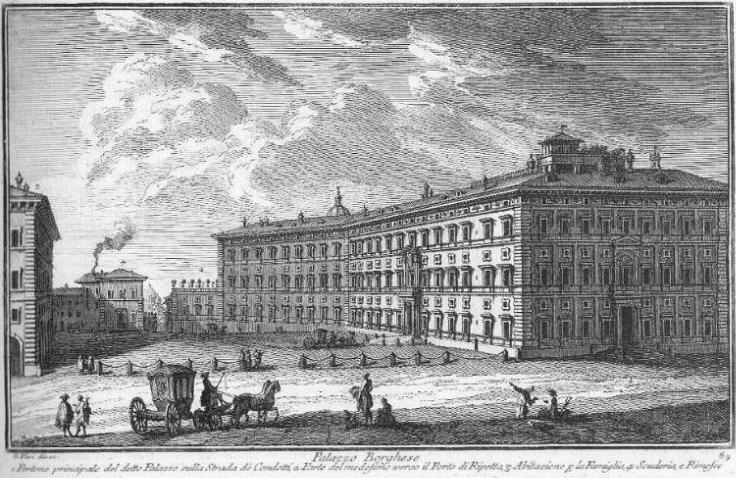 Palazzo Borghese was built in a relatively short period of time (1560-1614), but it is the result of a series of additions, rather than the conclusion of a comprehensive initial project; in this 1754 etching Giuseppe Vasi tried to show the three sections of the palace: a) the southern façade which was completed before 1600 (far right); b) the angled and very long western façade (1605-1612); c) the northern terrace facing Porto di Ripetta (1612-1614). Other illustrators of the palace chose to show only two of its sections, e.g. Alessandro Specchi in 1699 (it opens in another window). Palazzo Borghese was called il Cembalo (Harpsichord) to describe its unusual shape.
The view is taken from the green dot in the small 1748 map here below. In the description below the plate Vasi made reference to: 1) Main entrance to the palace along Strada dei Condotti; 2) Prospect of the palace over Porto di Ripetta; 3) Building for the "family" (people working for the Borghese either as servants or in the administration of their properties); 4) Stables and coach house. 2) is shown in another page. The small map shows also 5) Piazza di Monte d'Oro. The exterior of Palazzo Borghese is unchanged from the time of the etching exception made for the loss of the coat of arms of Pope Paul V on the western façade, which Filippo Juvarra sketched in his book on the finest papal coats of arms. The stables and the coach house have been replaced by a modern building; today the square houses stalls selling old books and prints. The palace was repainted in 2010. You may wish to see the colour it had before (it opens in another window) and a page on the colours of Rome in the 1990s. 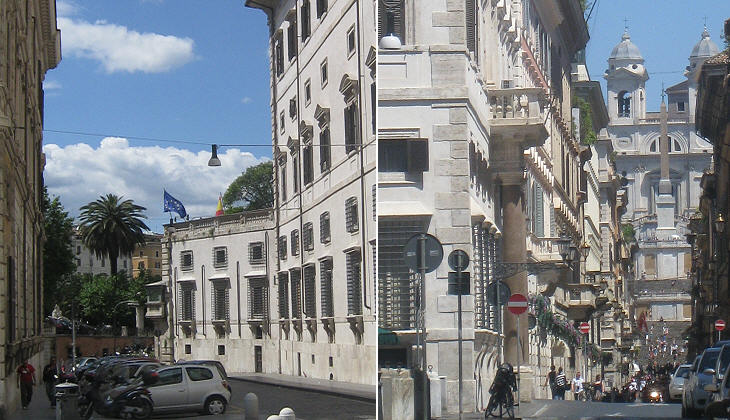 (left) Section facing the river; (right) southern side on Via della Fontanella Borghese with a view towards Via Condotti and SS. Trinità dei Monti 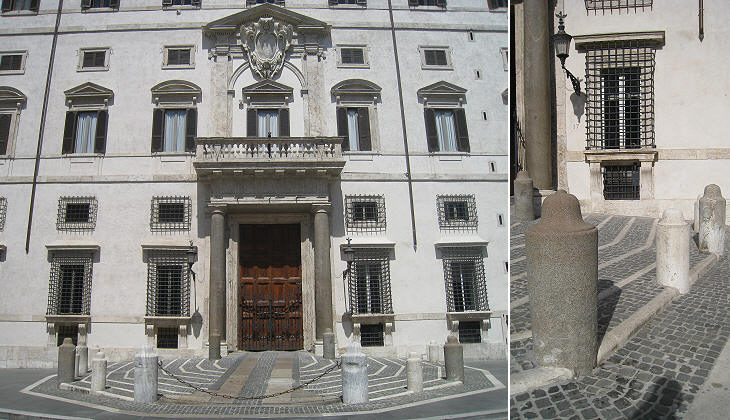 I went to see the Pallace of Burghesi. This is one of the noblest Pallaces in Rome. It gives you a fair Broadside of Windows, three Stories one over another; and its Length is Prodigious.
Richard Lassels' The Voyage of Italy, or a Compleat Journey through Italy in ca 1668
The construction of Palazzo Borghese was started by Monsignor Tommaso Del Giglio and it was continued by Cardinal Pedro de Deza; in 1600 the southern façade was completed; many art historians attribute the design of this section to Martino Longhi. In 1604 Cardinal Camillo Borghese bought the building, which he bequeathed to members of his family after he was elected Pope Paul V in May 1605.
The Borghese commissioned Flaminio Ponzio the enlargement of the palace; a façade almost identical to the existing one was built on the western side of the block; in 1607 an adjoining building was bought by the Borghese and this side was lengthened (with an angle); in 1612-1614 a sort of hanging garden was built opposite Porto di Ripetta.
Piazza Borghese, the square in front of the western façade, was also known as Piazza delle Catene, because of the chains placed on the small columns protecting the entrance. 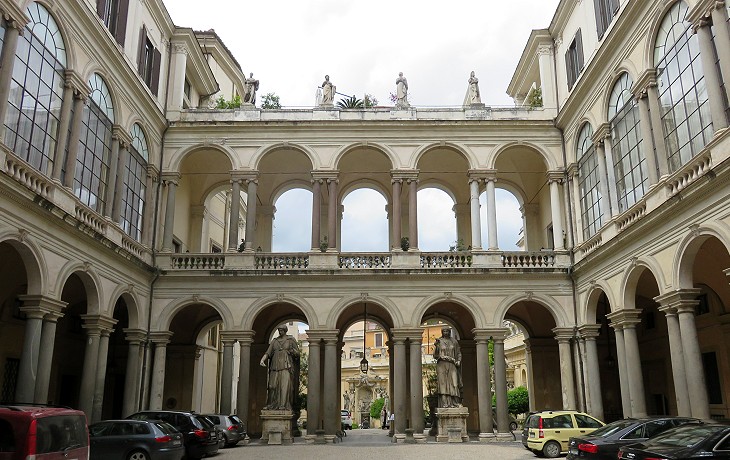 Mounting up to the Chambers I found a fair open Gallery built upon Arches and Pillars round about the Court. Lassels
March 1788. I was one morning in the Borghese Gallery, which I had not seen for a year, and to my joy I found that I now contemplated it with much more understanding eyes than formerly. There are unspeakable treasures in the Prince's possession.
J. W. Goethe - Italian Journey - Translation by Charles Nisbeth
The picture-rooms open from one into another, and have many points of magnificence, being large and lofty, with vaulted ceilings and beautiful frescoes, generally of mythological subjects, in the flat central parts of the vault. The cornices are gilded; the deep embrasures of the windows are panelled with wood-work; the doorways are of polished and variegated marble, or covered with a composition as hard, and seemingly as durable. The whole has a kind of splendid shabbiness thrown over it, like a slight coating of rust; the furniture, at least the damask chairs, being a good deal worn; though there are marble and mosaic tables which may serve to adorn another palace, when this has crumbled away with age.
Nathaniel Hawthorne - Passages from the Italian Note-book - 1859
The Borghese and in particular Cardinal Scipione Borghese, nephew of the Pope, were avid collectors of paintings which they used for the decoration of their town palace; today these paintings constitute the bulk of those shown at Galleria Borghese. 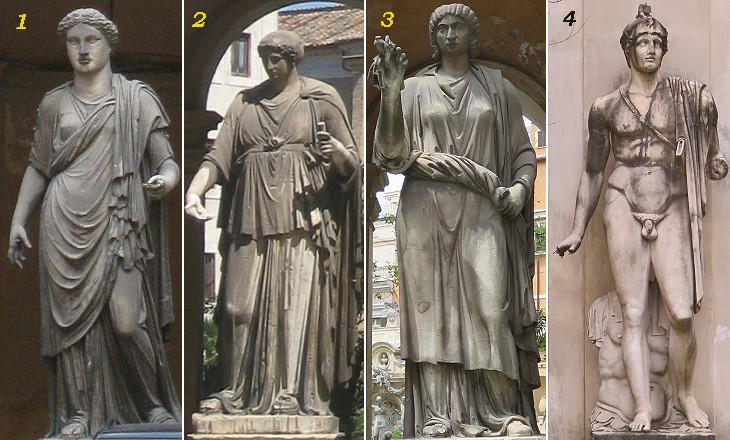 The Borghese were collectors also of antiquities. Statues and reliefs were mainly utilized for the decoration of their suburban villa, but a limited number of them were placed in the courtyard of the town palace and in the adjoining garden. In line with the usage of the time the missing parts of ancient statues were replaced by modern additions or by fragments of other ancient statues. In 1658 Giovanni Battista Borghese married Eleonora Boncompagni, from the family of Pope Gregory XIII. She had her study room in the ground floor of the western wing of the palace. In 1671 her husband decided to renovate the rear part of the palace to provide his wife with a pleasant small garden she could access from her study room. 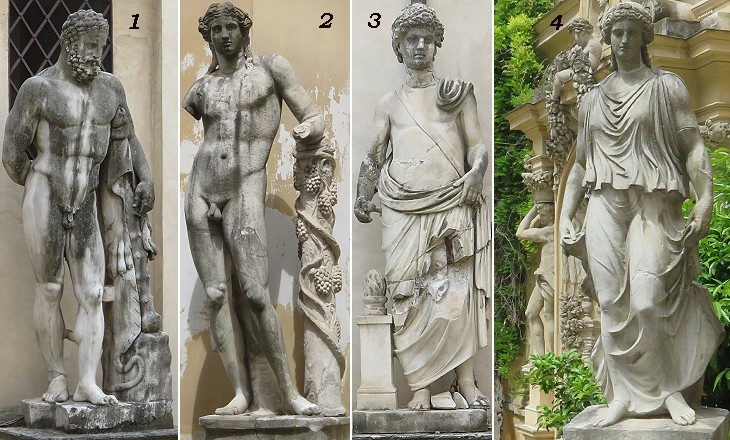 In the Garden. A Bas-Relief of five Figures, One sits upon a Rock playing on a Fistula. Two Antique Statues, extremely Fine, of the Hercules of Farnese: Less than that, but big as the Life. Venus of Medicis. Antique.
Jonathan and Jonathan Richardson - Account of Some of the Statues, etc. in Italy - 1722
Carlo Rainaldi superintended the design of the garden. He decorated it with some ancient statues, because this was a must for a noble Roman residence, but he chose statues which were nicer to see and less imposing than those in the courtyard. Some of them are still there. Three fountains were the key feature of the new set up of the garden. They were decorated by Leonardo Retti, Filippo Carcani and Francesco Cavallini, three sculptors who began their career either working for Gian Lorenzo Bernini or for a sculptor of the master's inner circle (e.g. Retti worked with Antonio Raggi at the ceiling of il Gesù). Retti made also the 29 vases on the top of the back wall, one of which can be seen in the image used as background for this page. 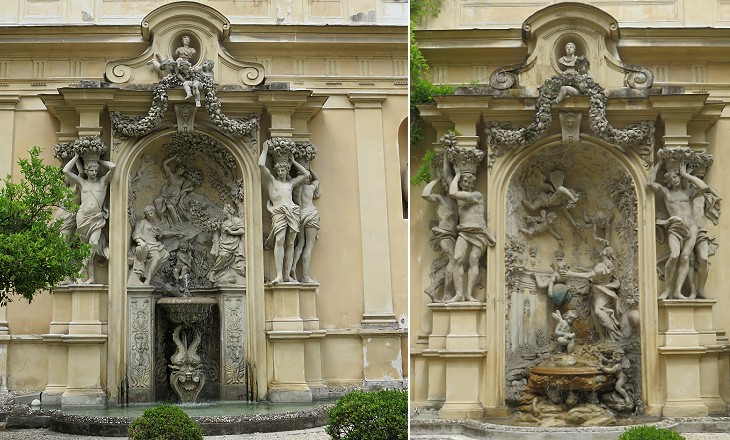 The gaiety of the decoration of the garden however is not indicative of Eleonora Boncompagni Borghese's personality and mood. She was interested in religious matters and she supported the views of Miguel de Molinos, a Spanish theologian who supported mystical prayer and a state of contemplation. These views were condemned as heretical in 1687 and eventually Molinos was sentenced to life imprisonment. Relations between Eleonora and her husband were very tense and only on her deathbed she expressed the desire to reconcile herself with him, but she expressly wanted to be buried at S. Lucia dei Ginnasi, rather than in the family chapel at S. Maria Maggiore. 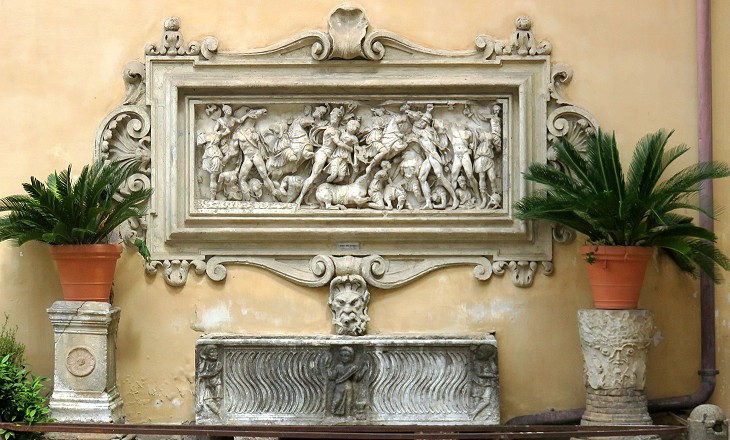 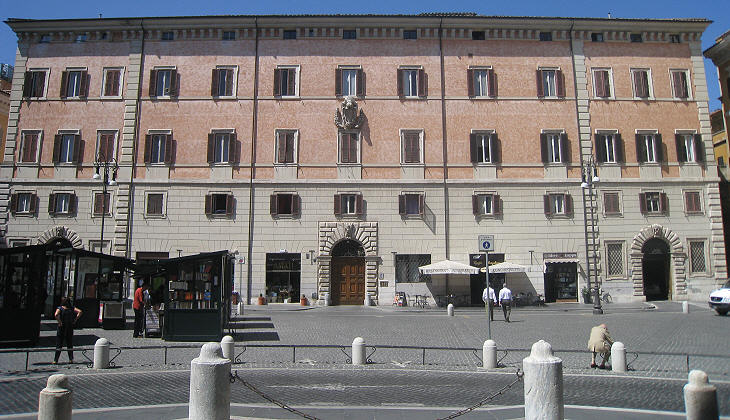 Cardinal Scipione Borghese had a personal court of more than 200 people; because he shared Palazzo Borghese with other members of the family, he built a completely independent palace for his assistants and servants; during his lifetime it was called Palazzo della famiglia del Cardinale; the design of the building is rather simple, but not without grace. 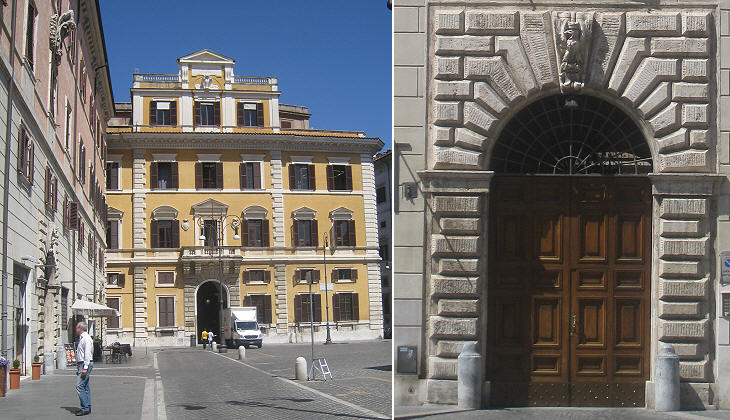 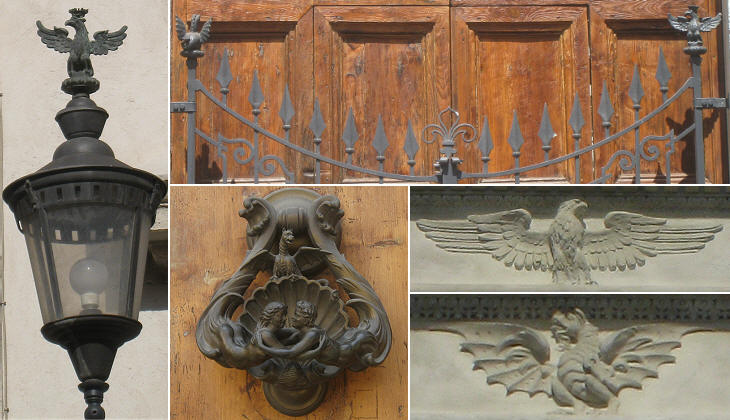 Eagles and dragons are the heraldic symbols of the Borghese; those shown above are just some of the many ones which decorate their properties. The Borghese still live in a section of their family palace. 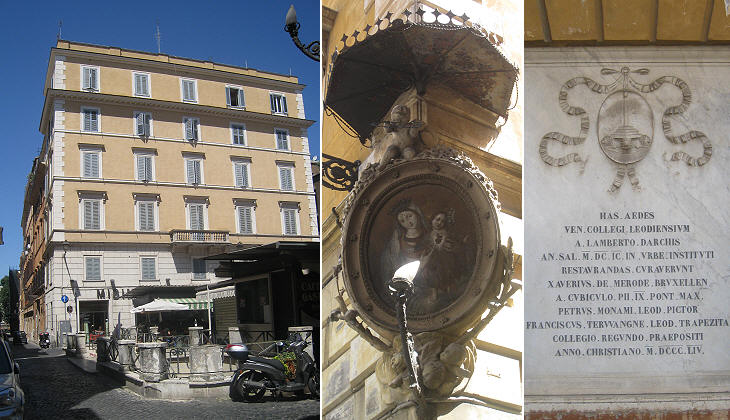 (left) Piazza di Monte d'Oro (Golden Mountain, the name of a lost inn); (centre) madonnella at the corner with Via dell'Arancio

; (right) inscription on the building which housed Ospizio di Liegi

Today the area behind Palazzo Borghese is void of interest because of the many changes made at the end of the XIXth century; the size of Piazza di Monte d'Oro, a square shown in Vasi's 1781 Map of Rome (No. 14), was reduced.
A street along the northern side of Palazzo Borghese is called Via dell'Arancio, a reference to the orange trees which grew on the terrace of the palace.
One of the buildings of the square housed a hostel for pilgrims from Liège, the main town of the French-speaking part of Belgium (the Flemish-speaking one had a church and a hostel at S. Giuliano dei Fiamminghi). It was founded in 1699 and it was restored in 1854 at the initiative of Xavier de Mérode, a Belgian prelate who was for many years Pope Pius IX's Minister of War.