SS. Pietro e Marcellino
(Vasi at work in the Grand View of Rome)

Links to this page can be found in Book 3, Map A3, Day 1, View C9, Rione Campitelli and Rione Monti. 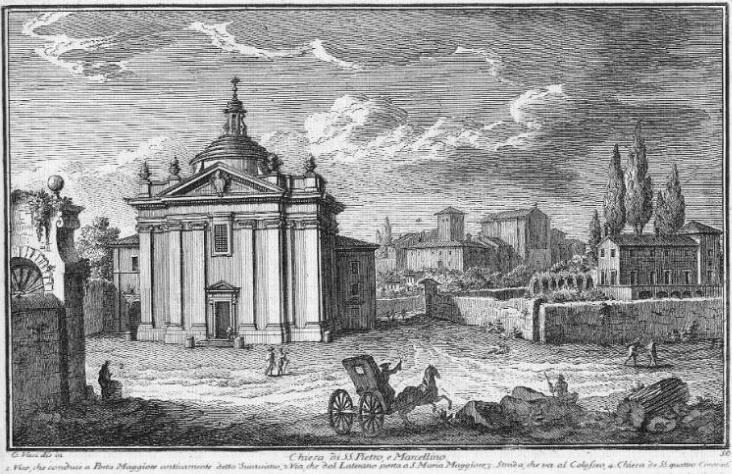 Giuseppe Vasi dedicated his 1753 book of etchings showing the seven basilicas and other ancient churches of Rome to Pope Benedict XIV, the reigning pope. This may explain why he included a view of SS. Pietro e Marcellino in the book. It was a very minor ancient church, but one which the Pope had completely rebuilt in 1751.
SS. Pietro e Marcellino was located at the intersection of two important streets, but it was surrounded by villas (e.g. Villa Giustiniani Massimo, of which Vasi shows a portal opposite SS. Pietro e Marcellino) and farmed areas so that the view has a landscape atmosphere rather than an urban one. In the background Vasi showed SS. Quattro Coronati, a church which retained its medieval appearance.
The view is taken from the green dot in the small 1748 map below. In the description below the plate Vasi made reference to: 1) Street leading to Porta Maggiore; 2) Street leading from S. Giovanni in Laterano to S. Maria Maggiore (i.e. Via Merulana, aka Via Tabernola); 3) Street leading to Colosseo; 4) SS. Quattro Coronati. The small map shows also 5) SS. Pietro e Marcellino (before it was redesigned); 6) Sacello della Madonna; 7) site of Tempio di Iside. The dotted line delineates the border between Rione Campitelli (left) and Rione Monti (right). 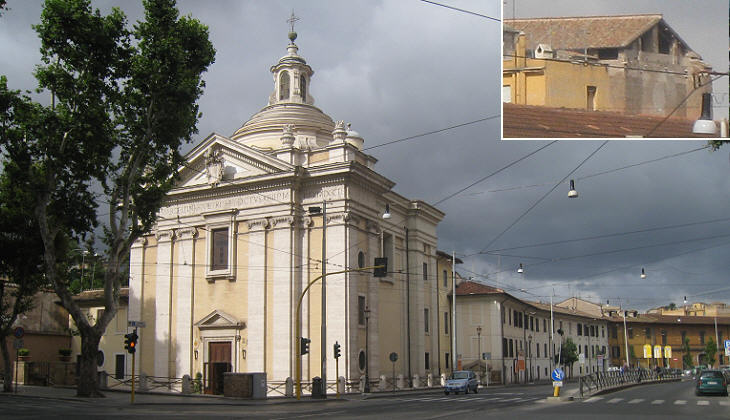 The view in June 2010 (in the inset the roof of SS. Quattro Coronati)

Today the crossroads between the street leading to Colosseo and Via Merulana is very busy (the photo was taken on an early Sunday morning). When Vasi drew his etching the nunnery behind the church was yet to be built; it now obstructs (together with later construction) the view of SS. Quattro Coronati, of which only a roof can be seen, but a view similar to that of the plate can be seen from the parallel street which marks the border between the two rioni. 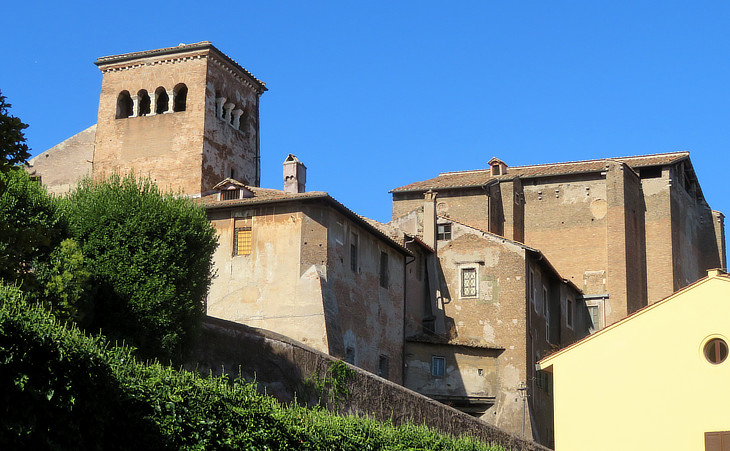 The view of SS. Quattro Coronati from Via di S. Giovanni in Laterano in August 2021

The small map shows that the section of Via Merulana leading to S. Giovanni in Laterano was very steep; in order to adapt it to modern traffic requirements the level of the ground near the church was raised so that today SS. Pietro e Marcellino is in a sort of a hole. Via Merulana was enlarged and S. Matteo, a small church which Vasi showed in his 1781 Map of Rome, was pulled down. 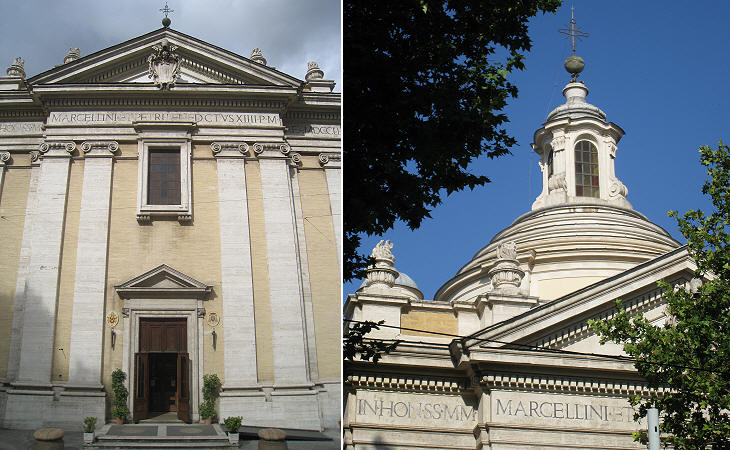 SS. Pietro e Marcellino was designed by Girolamo Theodoli, a nobleman and architect. He was Marquis of S. Vito and Earl of Ciciliano. The new church is indicative of the transition from Baroque to Neoclassical architecture.
The neat design of the façade without the curved lines which were still in fashion at the time (e.g. in the new façade of S. Croce in Gerusalemme), must have pleased Pope Benedict XIV. The Pope disliked some restorations of ancient churches, including the new loggia of S. Maria Maggiore, because of their excessive decoration. 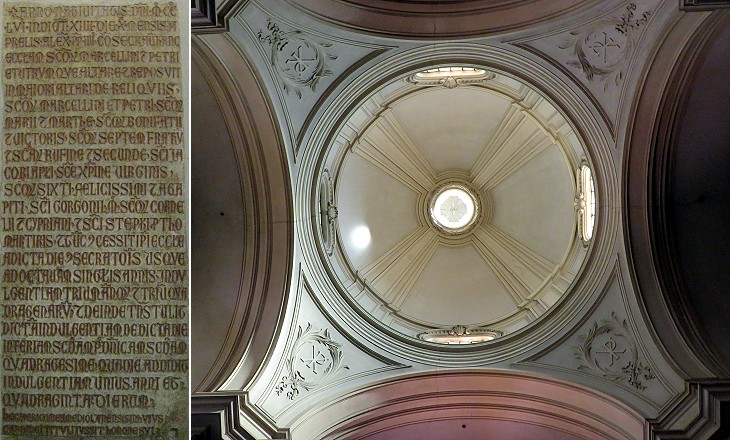 (left) 1256 inscription celebrating the restoration of the church and the relocation of the saints' relics; (right) interior of the dome

Sts. Peter and Marcellinus were two martyrs of the early IVth century; a church was dedicated to them on the site where they were buried, three miles from Porta Maggiore; according to an inscription dictated by Pope Alexander IV in 1256 their bodies were relocated to their church inside Rome.
You may wish to see SS. Pietro e Marcellino as it appeared in a 1588 Guide to Rome. A 1674 rather detailed guide to the churches of Rome by Filippo Titi mentions the church, but without any references to works of art it contained or its architecture. Apart from the 1256 inscription the interior is entirely new. 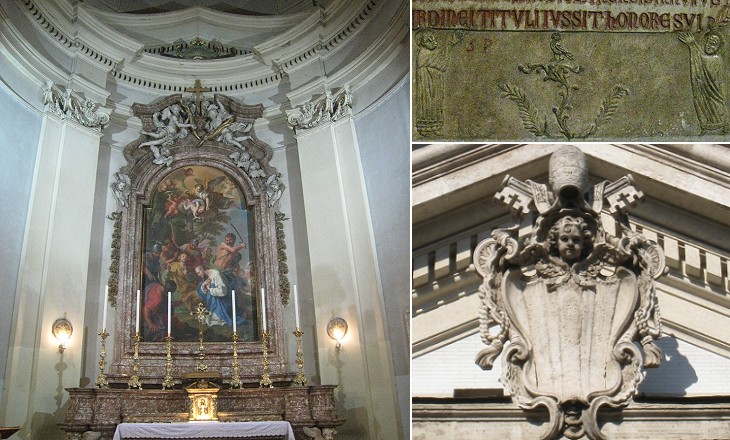 (left) Main altar with a painting by Gaetano Lapis depicting the beheading of the two martyrs; (right-above) 1256 relief showing the two saints and a phoenix, symbol of Resurrection, above a branch of tree; (right-below) coat of arms of Pope Benedict XIV (shown because of the angel's kiss curl) 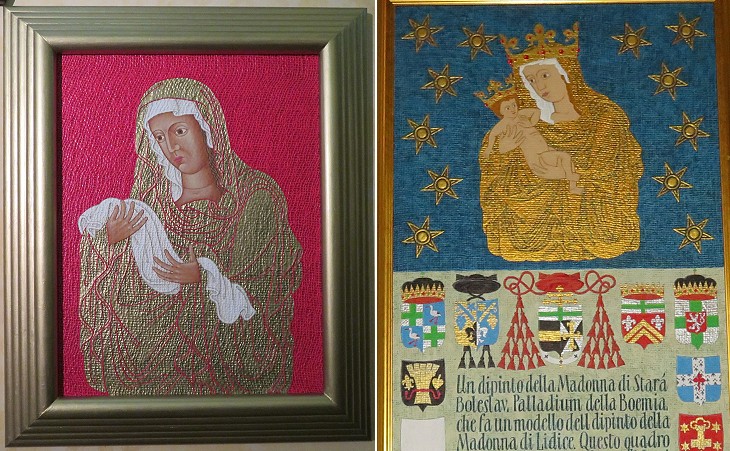 Two very recent additions to the works of art of the church: paintings by Zdirad Cech 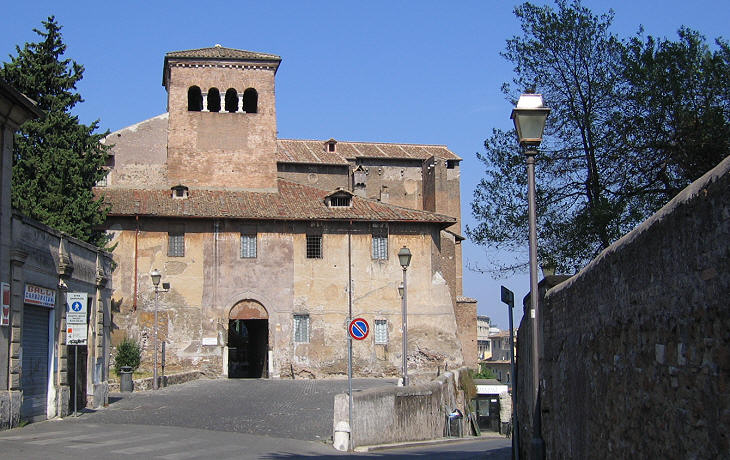 Via dei SS. Quattro Coronati (the street to the right leads to Colosseo which is partly visible)

While SS. Pietro e Marcellino is today immersed in the noise and pollution caused by cars and buses, at a few hundred yards from this church, SS. Quattro Coronati still lives in its medieval past. Similar to S. Saba and other medieval churches it is protected by walls and its bell tower (the first of Rome) clearly had a defensive purpose. 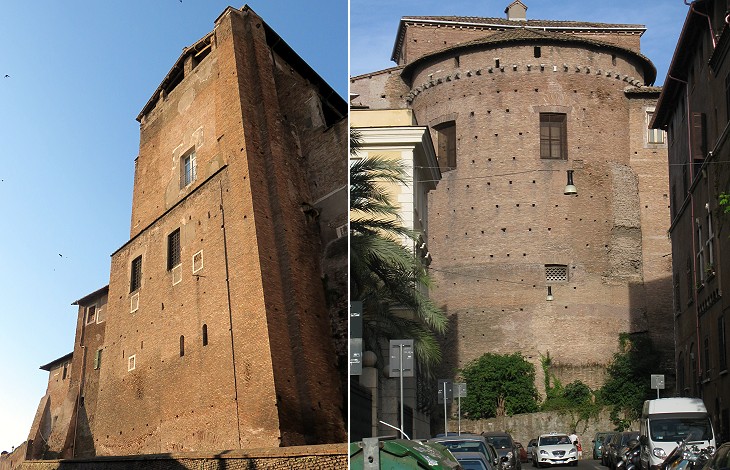 Because two sides of the complex are built on the edge of a hillock, the northern wall and the apse are supported by impressive substructures; in particular the wall of the apse retains masonry elements which indicate that the church was built upon a Late Roman basilica which probably belonged to a private house.
A reference to Titulus Sanctorum Quattuor Coronatorum has been found in the records of a 595 synod. In the IXth century Pope Leo IV largely restored the early church; according to art historians the complex was then composed of a large basilica preceded by an atrium, the entrance to which was protected by a tower. 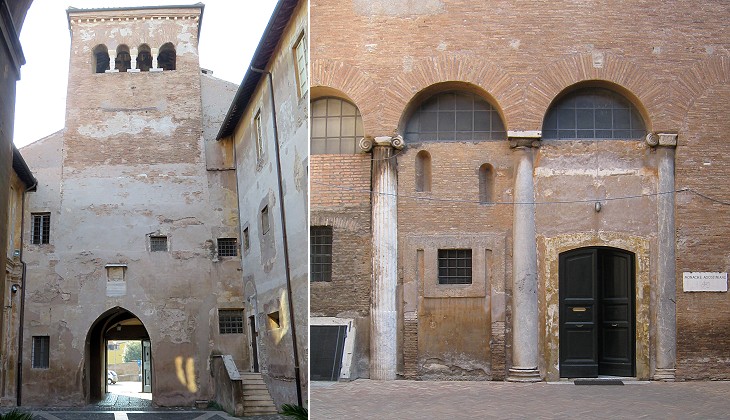 (left) Tower of the outer courtyard and the exit to Rome; (right) inner courtyard: columns which separated the nave from the right aisle and which were included into the wall of a Benedictine monastery

In 1084 Robert Guiscard sacked Rome and set fire to SS. Quattro Coronati; Pope Paschal II re-consecrated the church in 1116 (he restored also S. Lorenzo in Lucina and S. Bartolomeo all'Isola), but its size was reduced to the final part of the nave and the apse; the initial part of the nave was not rebuilt and it became the current inner courtyard of the complex; the aisles of the original basilica were included into a Benedictine monastery. The reconstruction of SS. Quattro Coronati was completed in the early XIIIth century by a fine cloister. 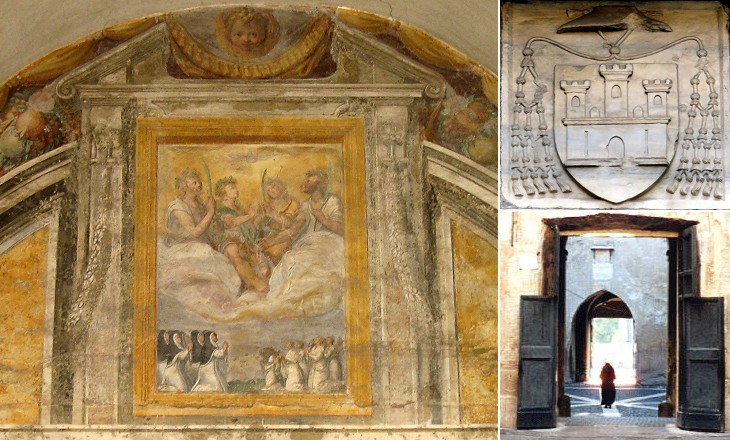 (left) Fresco above the entrance to the church depicting Augustinian nuns and orphans praying to the Four Crowned Martyrs; (right-above) coat of arms on the tower; it belongs to Cardinal Alfonso Carrillo de Albornoz, nephew of Cardinal Gil de Albornoz, who promoted a restoration of the complex in the early XVth century; (right-below) a nun on her way to Rome (also in the image used as background for this page)

During the XIIIth and XIVth centuries the monastery was modified in order to house the residence of some powerful cardinals, including Cardinal Benedetto Caetani, who became Pope Boniface VIII in 1294.
In 1562 Pope Pius IV assigned the complex to Augustinian nuns, who still live there.
You may wish to see the church as it appeared in a 1588 Guide to Rome. 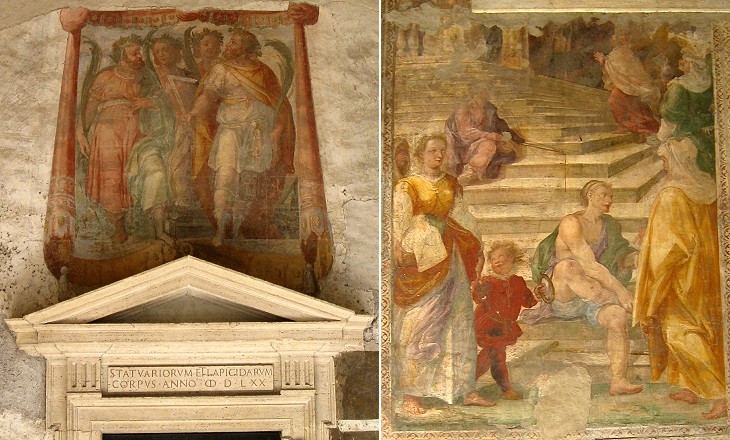 (left) Fresco depicting the Four Crowned Martyrs above the entrance to the office of the stonecutters' guild; (right) late XVIth century fresco in the outer courtyard depicting the Presentation to the Temple

According to the prevailing tradition the saints to whom the church was dedicated were four sculptors who refused to work on a statue of Asclepius, Greek god of medicine, and who for this reason were put to death by order of Emperor Diocletian; the reference to Coronati (Crowned) is probably due to the fact that they were portrayed wearing wreaths symbolizing their martyrdom. Because of the trade of the saints the guild of sculptors (statuariorum) and stonecutters (lapicidarum) bought an oratory of the monastery in 1570. Eventually sculptors moved to Accademia di S. Luca, the guild of Roman artists, which at the beginning was reserved to painters only. 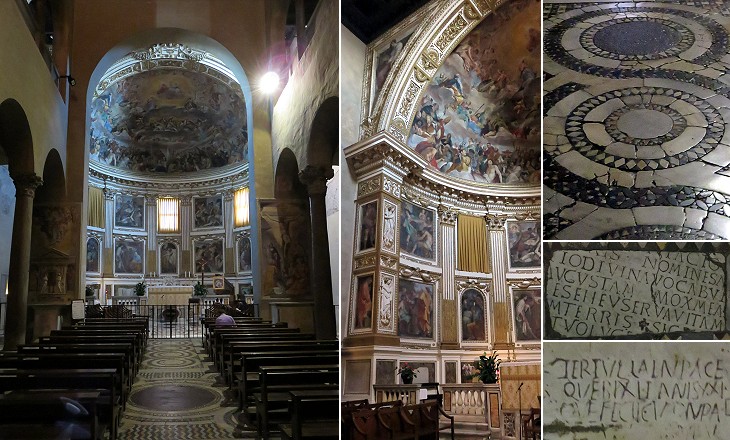 The interior of the church retains the 1621-1627 decoration of the apse, but all other additions to the medieval church were removed in 1912-1916. 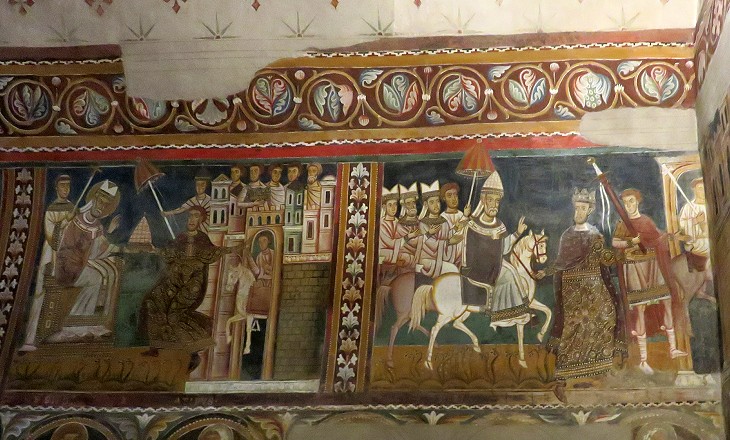 Dante made reference to the Donation of Constantine, a document which claimed that Emperor Constantine donated the City of Rome and the entire Western Roman Empire to Pope St. Sylvester I. The poet was not supportive of the papal role in worldly affairs which originated from that decision. 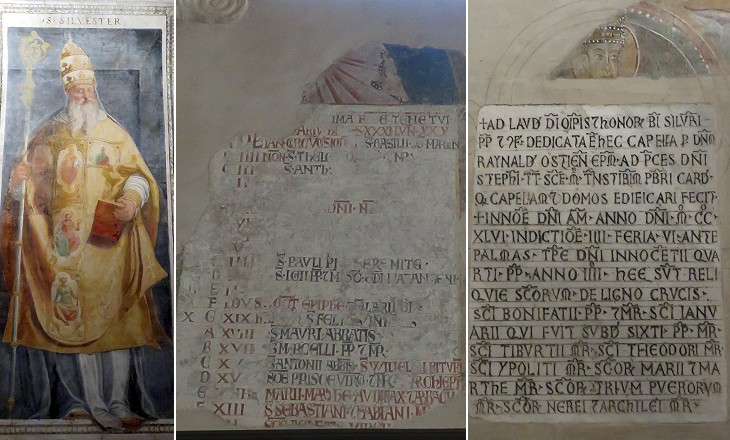 (left) Pope St. Sylvester I in a fresco attributed to Raffaellino da Reggio (after 1570); (centre) a XIIIth century calendar with names of saints in the antechamber of the oratory (see a similar ancient calendar at Veroli); (right) 1246 inscription celebrating the construction of the oratory and the relocation of relics to it

When the oratory was built relations between Pope Innocent IV and Emperor Frederick II were very tense and the frescoes which cover the walls of the building were meant to visually depict a cornerstone of the assumed supremacy of the Popes over the Emperors. The Donation of Constantine was eventually considered a forgery after Lorenzo Valla, a humanist, proved in 1440 that the Latin used in the document was inconsistent with that spoken in the IVth century. 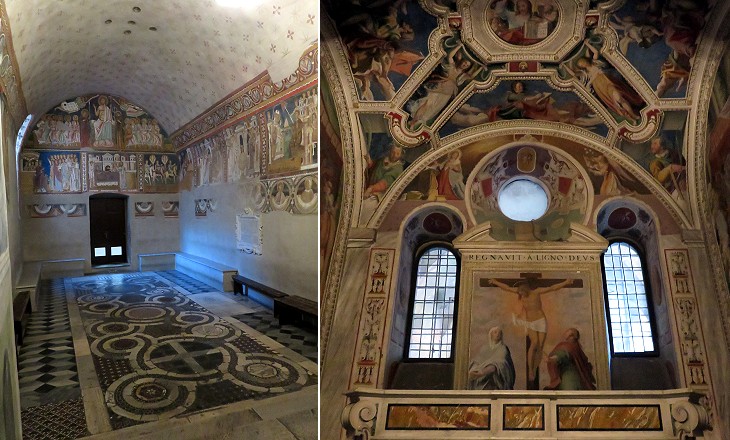 (left) View from the altar; (right) frescoes behind the altar attributed to Raffaellino da Reggio

The stonecutters' guild made some changes to the final part of the oratory and placed some marble inscriptions along the walls, but overall they did not damage the XIIIth century aspect of the building. You may wish to see a directory of churches and chapels belonging to guilds. 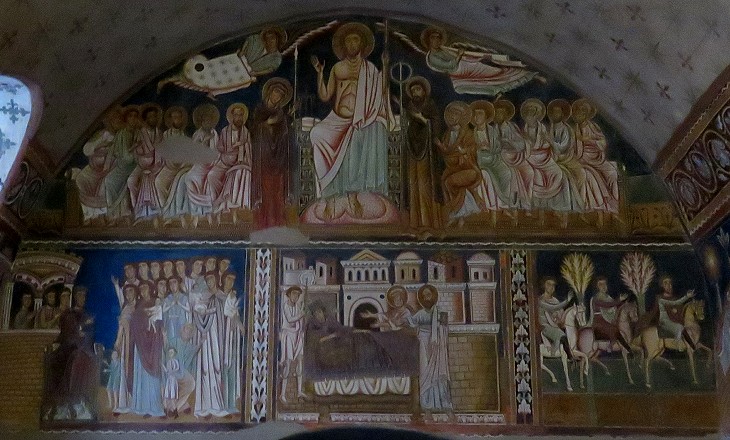 Frescoes on the rear façade 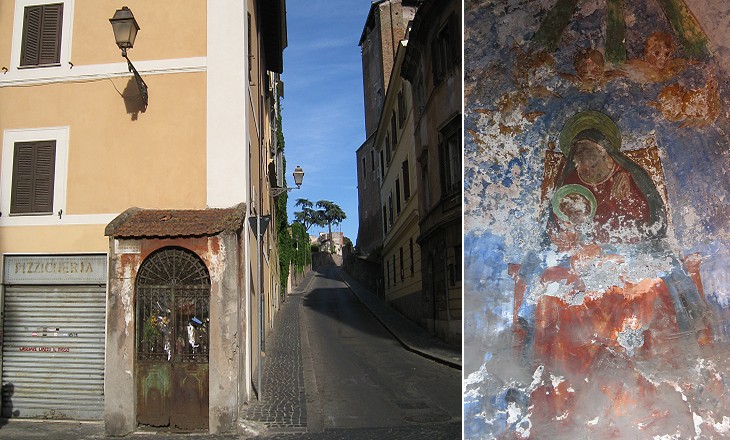 At the foot of the slope leading to SS. Quattro Coronati there is what is likely the most ancient sacred image of Rome. It is located along the itinerary followed by the procession which accompanied the newly elected pope (and Bishop of Rome) to S. Giovanni in Laterano for the formal ceremony during which he took possession of his diocese.
The madonnella is most likely a XVth century painting, but the existence of a sacred image located at this site is documented since the year 1000. 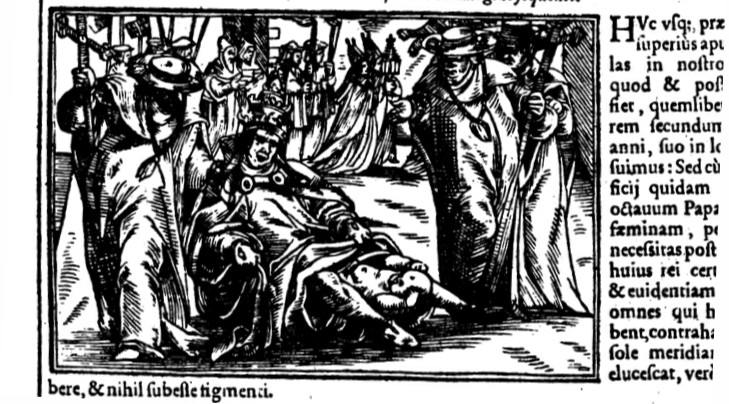 According to a legendary account in the IXth century a female pope (Pope Joan) was caught by labour pains at this spot, her sex was discovered and she was stoned to death. The tale was used by Protestants as an example of the wickedness of the Popes, thus stirring a reaction.
I think it not amiss to examine a little this Fable of a she Pope, or of a Pope Joanne. I am not affraid at all to call this a fable, both for the unlikliness of it in general; as also for the suspected authority of Its first broachers; the contrarieties in the story and the little credit given unto it by the learnedest adversaries of the Roman Church. (after a long dissertation) If I have been a little too long in this digression you will pardon me: We are all debtors to Truth and all Men ought to be glad to see themselves disabused.
Richard Lassel - The Voyage of Italy, or a Compleat Journey through Italy in ca 1668. He was a Roman Catholic priest. 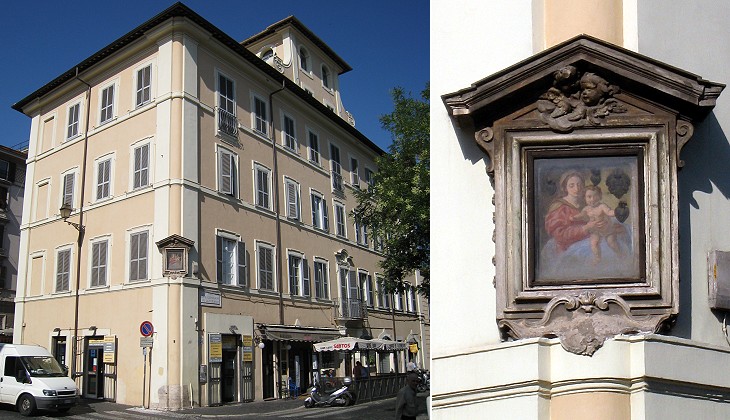 A madonnella in much better shape is located on an elegant XVIIIth century building near Sacello della Madonna and opposite S. Clemente. 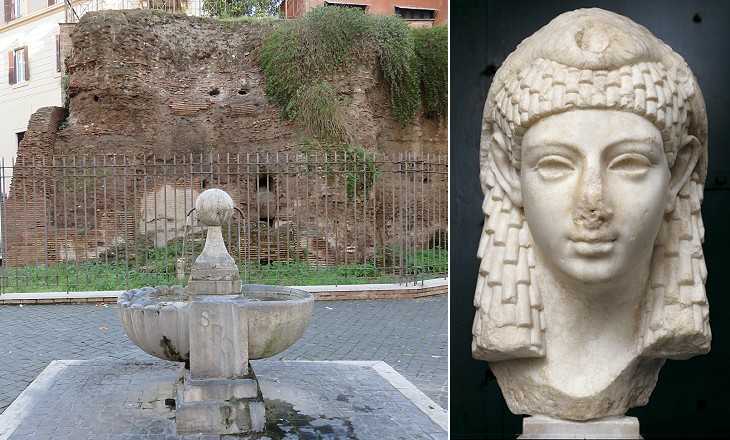 Regio III - Isis et Serapis, one of the fourteen regiones into which Rome was divided by Emperor Augustus, was named after a temple dedicated to these Egyptian deities. The exact location of the temple is uncertain, but today a large wall with niches is believed to have been a monumental fountain of one of the terraces which made up the temple. Its shape is assumed to have resembled Santuario della Fortuna Primigenia at Palestrina (on a smaller scale). It was most likely built in 80 BC by Consul and Pontifex Maximus Quintus Caecilius Metellus Pius which indicates that the worship of Egyptian deities by the Romans preceded the conquest of that country. It is referred to as Isium Metellinum to distinguish it from Isium Campensis, another large temple to Isis in Rione Pigna.