S. Croce in Gerusalemme
(Vasi at work in the Grand View of Rome) 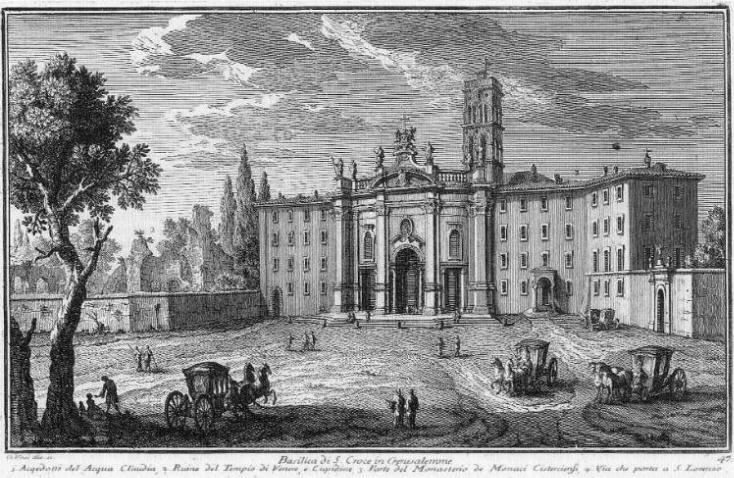 S. Croce in Gerusalemme is one of the Sette Chiese, the seven Roman basilicas which are visited by pilgrims, especially during the Jubilee years. It is said to have been built by St. Helena to house the fragments of the True Cross she found in Jerusalem and brought to Rome. At the time of the plate the façade had just been rebuilt (1743) by Domenico Gregorini and Pietro Passalacqua at the initiative of Pope Benedict XIV.
The view is taken from the green dot in the small 1748 map below. In the description below the plate Vasi made reference to: 1) Acquedotto dell'Acqua Claudia; 2) Tempio di Venere e Cupido; 3) Monastery; 4) Street leading to Porta S. Lorenzo. 1) is covered in another page. The small map shows also 5) S. Maria del Buon Aiuto; 6) Terme Eleniane; 7) Oratorio di S. Margherita. 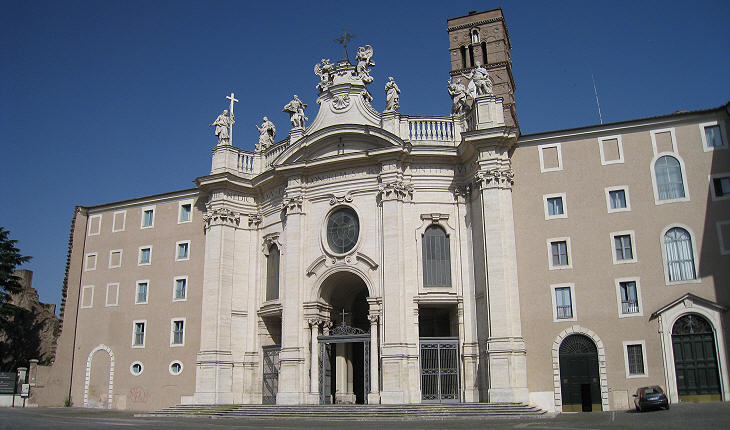 S. Croce is no longer in a remote area of Rome, but a large space in front of the basilica has been preserved from modern buildings and the view is almost that shown in Vasi's etching. The building faces north-west and therefore it is best seen in the afternoon of a day near the summer solstice.
You may wish to see the basilica as it appeared in a 1588 Guide to Rome, when it was surrounded by walls and its aspect was very similar to that of S. Lorenzo fuori le Mura.

The original church was made up of the large hall with an apse of an ancient Roman residence. It was modified in the XIIth century by the addition of a transept and the division of the hall into three naves. Other major changes were made in 1743 when an elliptical vestibule, perhaps the swansong of Roman baroque architecture, was added before the church. 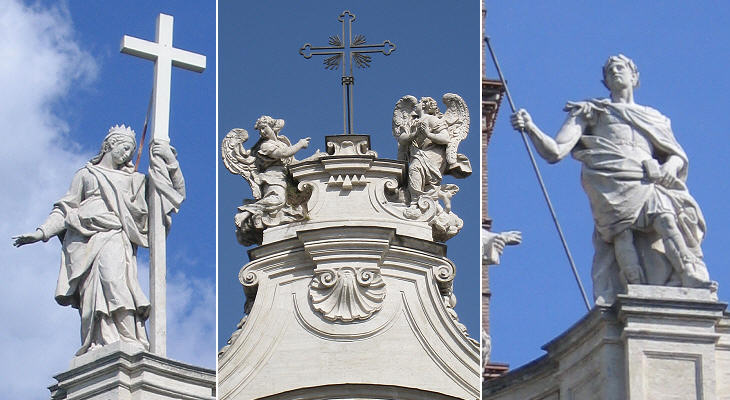 (left) St. Helena (the same image is shown in the background of this page); (centre) angels worshipping the Cross; (right) Emperor Constantine

The façade is crowned by gigantic statues. One of them portrays Emperor Constantine, the son of St. Helena, as if he were a saint (for the Greek Orthodox Church he is a saint). You may wish to see a gigantic statue of Constantine by Gian Lorenzo Bernini and one of St. Helena by Andrea Bolgi, one of his assistants. 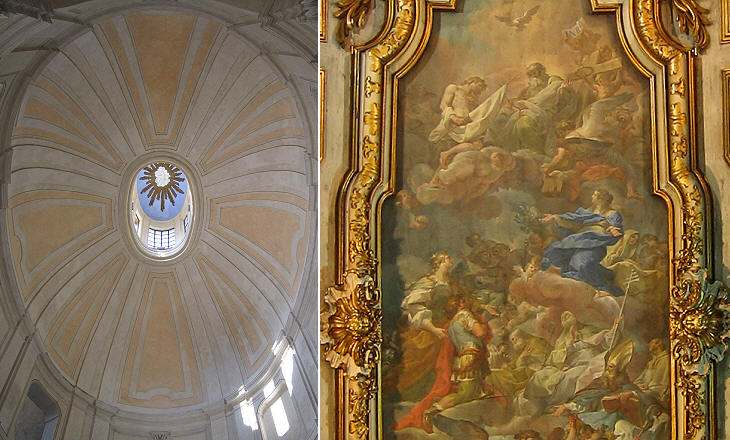 (left) Dome of the vestibule: its neat stucco decoration recalls patterns established by Francesco Borromini at Cappella dei Re Magi; (right) detail of an oil painting by Corrado Giaquinto on the ceiling of the main nave

Giaquinto portrayed Constantine on his knees while his mother introduces him to the Virgin Mary who in turn intercedes on his behalf with the Holy Trinity. The Emperor did have a need for good advocates as he had ordered the killing of his wife and of his eldest son. The purpose of the painting was to recognize the contribution of Catholic monarchs (and in particular of the Habsburg Roman Holy Emperors) in the stamping out of heresies. The painting by Giaquinto does not have the illusionistic features of many other Roman ceilings of that period. You may wish to see the ceilings he painted at S. Nicola dei Lorenesi and at S. Giovanni Calibita. 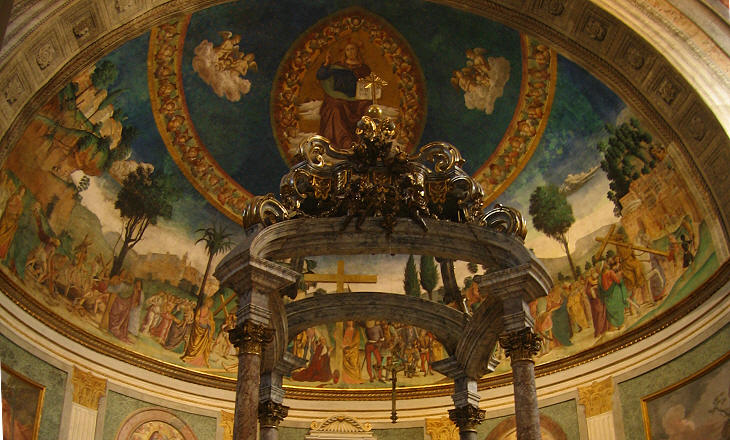 Gregorini and Passalacqua had to work on a tight budget and they did not touch parts of the building. They used the existing ancient columns of a medieval ciborium to place above them a very baroque bronze structure. 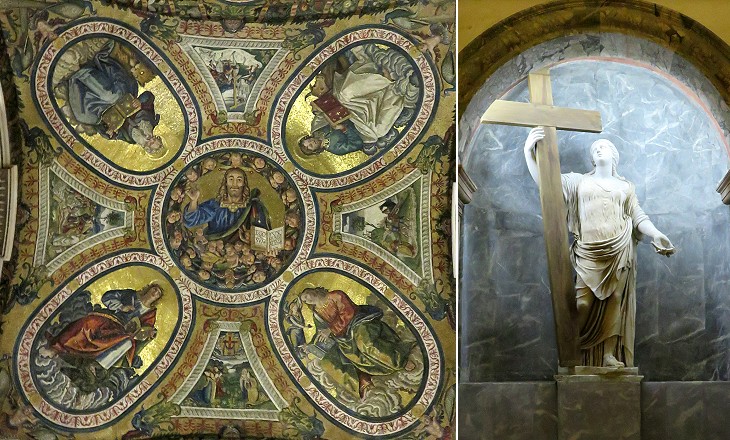 Cappella di S. Elena: (left) mosaic of the ceiling; (right) ancient statue of Juno found at Ostia and turned into a statue of St. Helena in the XVIIIth century

The main altar and the apse were not the heart of the church. Pilgrims went to S. Croce in Gerusalemme to see the fragments of the True Cross and other relics and these were kept in an underground chapel which is said to have been built by Empress Galla Placidia (or by her son Valentinian III); it was decorated with (lost) mosaics similar to those of her mausoleum at Ravenna. The decoration of the chapel was renewed in the late XVth century with mosaics perhaps based on drawings by Melozzo da Forlì. In the XVIIth century some fragments of the cross were moved to S. Pietro. 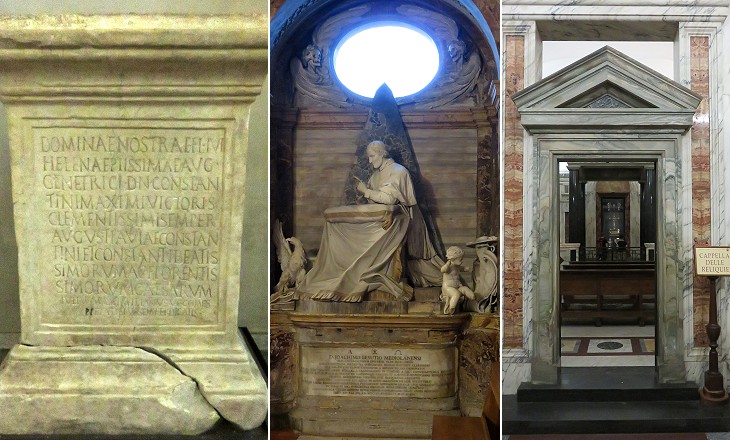 (left) Cappella Gregoriana, a chapel adjoining Cappella di S. Elena: pedestal of a statue of St. Helena (it was found at the time of Pope Sixtus V and based on the text of the inscription it is dated 327); (centre) 1755 monument to Cardinal Gioacchino Besozzi by Innocenzo Spinazzi (see a page on similar monuments); (right) entrance to Cappella delle Reliquie

The holiness of the underground chapels was increased by the fact that according to tradition their original floors were covered with earth from Jerusalem that St. Helena had carried with her. Many cardinals, bishops and other pious men chose to be buried in these chapels. Unfortunately for them the relics were moved in 1930 to Cappella delle Reliquie, a new modern chapel which was completed in 1952. It can accommodate the visit of large groups, but it lacks the appeal which praying where others have prayed for centuries gives to a holy site. 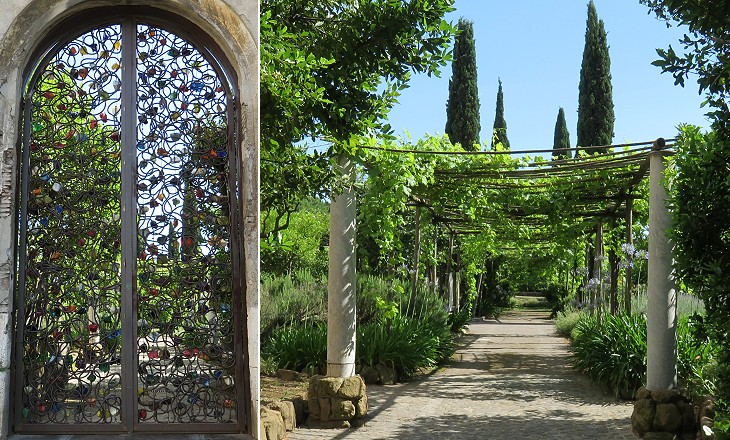 The monastery adjoining the basilica belongs to the Cistercian Order, a branch of the Benedictines with a great deal of emphasis on self-sufficiency and manual work; the monks have their kitchen garden inside nearby Anfiteatro Castrense, an ancient oval stadium behind the basilica. 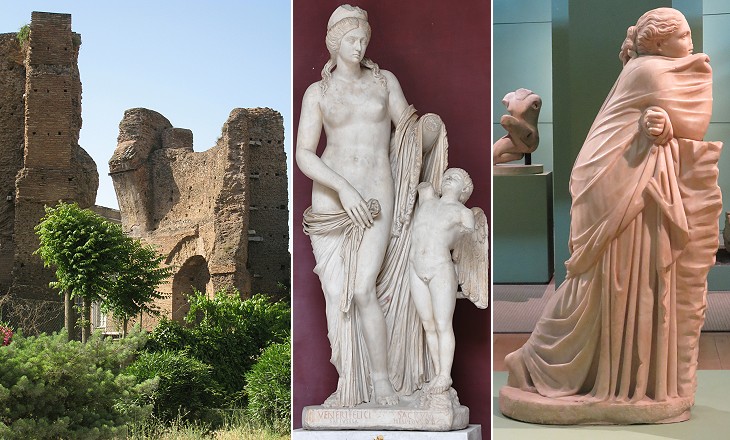 The ruins which Vasi attributes to a temple to Venus and Cupid are actually those of a villa built by Emperor Heliogabalus, which later on became part of the residence of St. Helena (Palatium Sessorianum). The statue of Venus (known as Venus Felix) is said to portray Sallustia Orbiana, wife of Emperor Alexander Severus. It was found before 1509 when chronicles say that Pope Julius II moved it to Casino di Belvedere. 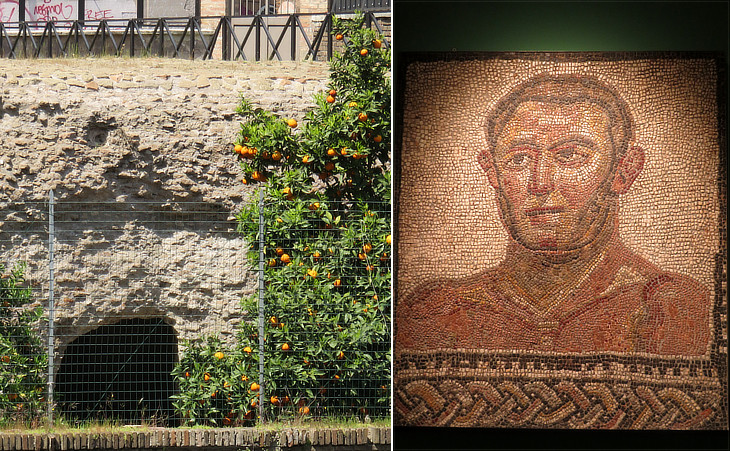 These baths were built at the time of Emperor Septimius Severus between S. Croce in Gerusalemme and an aqueduct built by Emperor Nero which provided them with water. They stood on low ground to be protected from northern winds and they had gardens on their southern side. An inscription found in the XVIth century indicates that they were restored by St. Helena, but it is not clear whether they were public or private baths. Today only the cisterns are visible in a sort of below ground garden surrounded by apartment blocks. 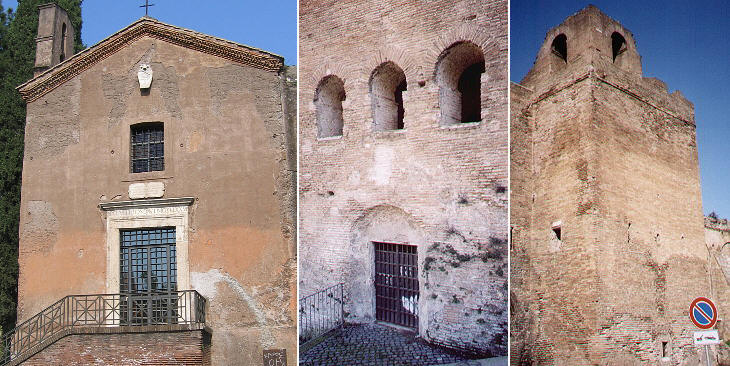 S. Maria del Buon Aiuto was built in 1476 by Pope Sixtus IV on the site of a previous chapel known as S. Maria de Spazolaria. The Pope placed his coat of arms on the building and an inscription with his name on the lintel of the door. A smaller inscription said that the chapel was meant for those who wished to pray for the souls of their kin in Purgatory.
Oratorio di S. Margherita is a chapel which is rather hard to find; it is located in a tower of the Roman walls: the tower, unlike the others, has some windows on the inner side of the walls and a sort of bell tower at its top. Because of its overall aspect it was called Prigione (prison) di S. Margherita. The chapel was quite popular in the XVIIth and XVIIIth centuries, but later on its existence was forgotten.

Next plate in Book 3: Basilica di S. Lorenzo fuori le Mura.
You have completed Day 1! Move to Day 2.
Next step in your tour of Rione Monti: Porta S. Giovanni.