Links to this page can be found in Book 2, Map B2, Day 2 and Day 3, View C6, Rione Campo Marzio and Rione Colonna. 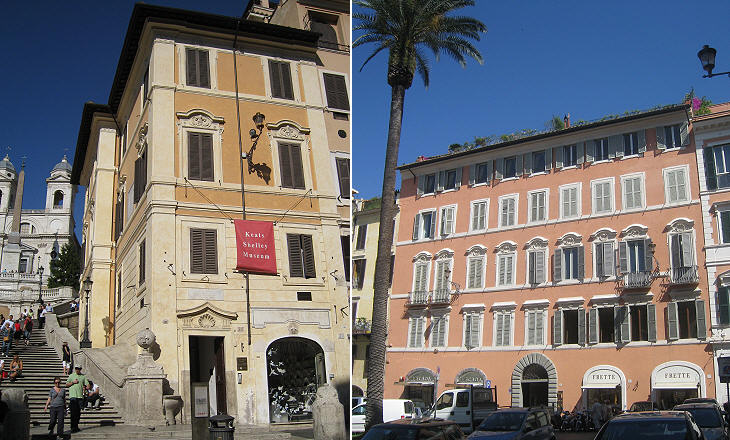 XVIIIth century buildings belonging to the monastery of SS. Trinità dei Monti: (left) building where John Keats passed away in 1821 (it now houses the Keats Shelley Museum; the English poet was buried at the Protestant Cemetery of Rome); (right) former Albergo del Monte d'Oro where Charles de Brosses and Johann Caspar Goethe, the father of Johann Wolfgang, stayed in 1740

The French kings, also as part of a diplomatic strategy, made large donations to the Minims of SS. Trinità dei Monti, who invested them in the construction of a series of elegant buildings at the sides of the steps and in Piazza di Spagna; they can be easily identified as they were decorated with the French fleurs-de-lis, as in the image used as background for this page; the buildings were split into apartments which were rented to foreigners or they housed inns and cafés (see a page on Flats for Rent in XVIIIth century Rome).
I came to Rome on the 4th November, 1644, about five at night; and, being perplexed for a convenient lodging, wandered up and down on horseback, till at last one conducted us to Monsieur Petit's, a Frenchman, near the Piazza Spagnola. Here I alighted, and, having bargained with my host for twenty crowns a month, I caused a good fire to be made in my chamber and went to bed, being so very wet.
John Evelyn's Diary and Correspondence
They allow Strangers more Liberty in their Churches at Rome, and, indeed, all over Italy, than in Flanders, and other Roman-Catholick Countries. They won't discourage those whose chief Business in their Country, generally speaking, is Curiosity, which they well know brings a good deal of Money among them. Besides, that the English, who they are sensible spend more freely than any other People, being for the most part what they call Hereticks, should not by any Incivilities be sowr'd into a further dislike of their Religion.
Edward Wright - Some Observations made in France, Italy etc. in the years 1720, 1721 and 1722, [1730].
Foreigners stayed for extended periods between December and April in order to attend some great religious ceremonies and to enjoy the Roman carnival with its parties and races.
Every winter there is a gay and pleasant English colony in Rome, of course more or less remarkable for rank, fashion, or agreeability, with every varying year. Thrown together every day and night after night, flocking to the same picture-galleries, statue-galleries, Pincian drives, and church functions, the English colonists at Rome perforce become intimate, and in many cases friendly. They have an English library where the various meets for the week are placarded: on such a day the Vatican galleries are open; the next is the feast of Saint so-and-so; on Wednesday there will be music and vespers at the Sistine Chapel; on Thursday the pope will bless the animals-sheep, horses, and what-not; and flocks of English accordingly rush to witness the benediction of droves of donkeys. In a word, the ancient city of the Cæsars, the august fanes of the popes, with their splendour and ceremony, are all mapped out and arranged for English diversion.
William Makepeace Thackeray - The Newcomes - 1855. After dinner we go and have coffee and mezzo-caldo at the Cafe Greco over the way. Mezzo-caldo is not a bad drink - a little rum - a slice of fresh citron - lots of pounded sugar, and boiling water for the rest. Here in various parts of the cavern (it is a vaulted low place) the various nations have their assigned quarters, and we drink our coffee and strong waters, and abuse Guido, or Rubens, or Bernini selon les gouts, and blow such a cloud of smoke as would make Warrington's lungs dilate with pleasure. We get very good cigars for a bajoccho and half - that is very good for us, cheap tobaccanalians. W. M. Thackeray
In 1760 an otherwise unknown Nicola di Maddalena levantino (as stated by parish records) opened a coffee-shop in Via Condotti which soon became popular among the many foreigners living in the area. Most likely Nicola came from one of the Greek islands belonging to Venice and this explains the name of his shop.
Caffè (del) Greco had to face the competition of Caffè degli Inglesi (now lost) which opened in that same year in Piazza di Spagna.
Babington's Tea Rooms, a very British establishment, in a way replacing Caffè degli Inglesi, was opened in 1893 in the building to the left of the Spanish Steps.
They are both listed among the historical shops of Rome. 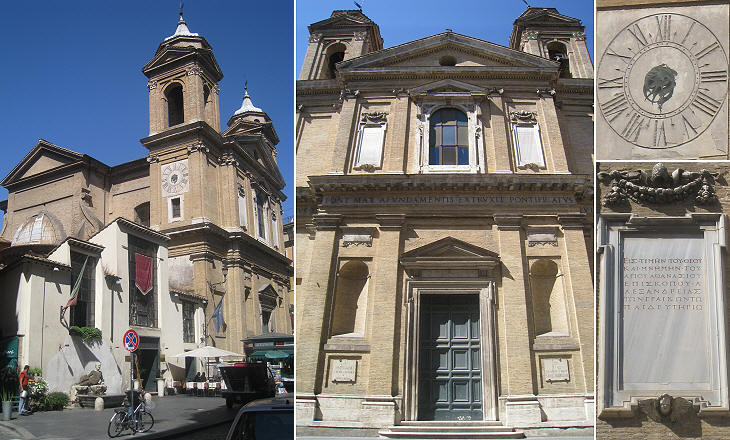 Pope Gregory XIII made a major effort to retain or bring into the Roman Catholic Church some Christian communities whose rites and practices were not fully consistent with those established by the Council of Trent. He built a college for the education of Greek-rite Catholic priests and next to it a church dedicated to St. Athanasius of Alexandria, a IVth century theologian, who was highly regarded in both the West and the East. The church, which has bell towers very similar to those of SS. Trinità dei Monti, is attributed to Giacomo Della Porta (you may wish to see it in a 1588 Guide to Rome).
The white building to the left of the church was the studio of the Tadolini, a family of sculptors; the studio was founded by Adamo Tadolini, a pupil of Antonio Canova, who sculptured the statue of King David at Colonna dell'Immacolata. 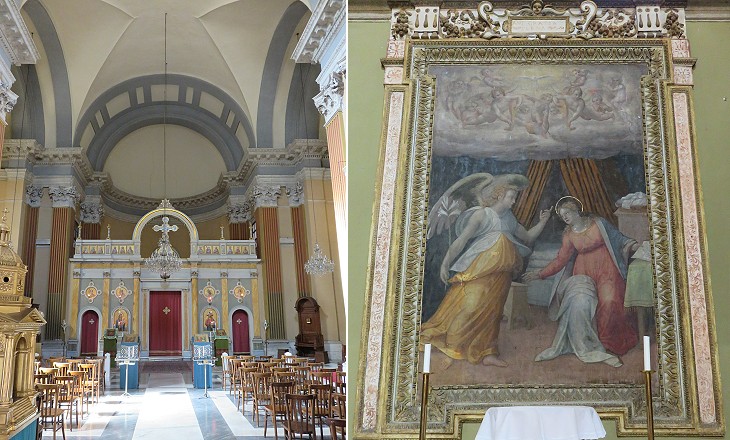 Interior with an 1876 iconostasis, screen separating the main altar from the rest of the church; (right) Annunciation by Francesco Traballesi or Tribaldesi (1583)

The church retains some of its late XVIth century paintings, but the interior is spoiled by an iconostasis which does not match the style of the building. You may wish to see a more typical iconostasis at Zakynthos. 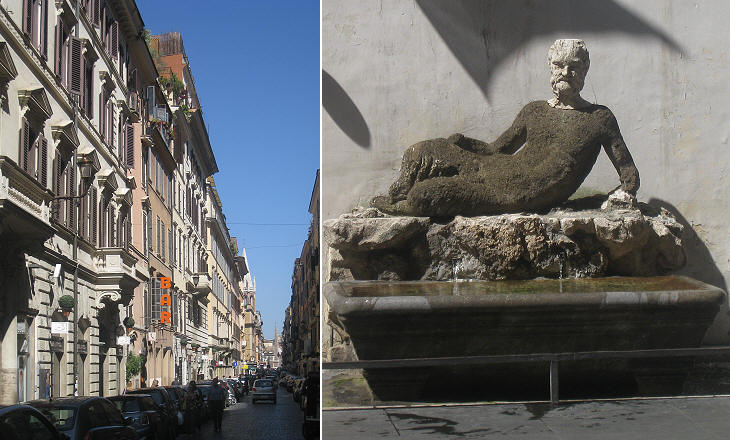 In 1525 Pope Clement VII opened the first section of Via Clementia, a new street between Piazza del Popolo and Piazza della Trinità (the old name of Piazza di Spagna); Pope Paul III completed the street and gave it his name, but the Romans called it Via del Babuino (Baboon) because of a small fountain which was placed in the street before 1584; it was decorated with an ancient statue portraying Silenus, the tutor and companion of Dionysus, but the figure looked so ugly that it was popularly called il Babuino; it is one of the Talking Statues of Rome, together with Marforio, Pasquino, Madama Lucrezia, Abate Luigi and il Facchino. Between 1738 and 1877 the fountain was placed in a niche of Palazzo Boncompagni Cerasi.
A small street off Via del Babuino is named Via del Teatro d'Alibert after a theatre which was there until 1863 when it was destroyed by fire; it was built in 1718 and at that time it was the largest theatre in Rome. Eventually it housed carnival balls. 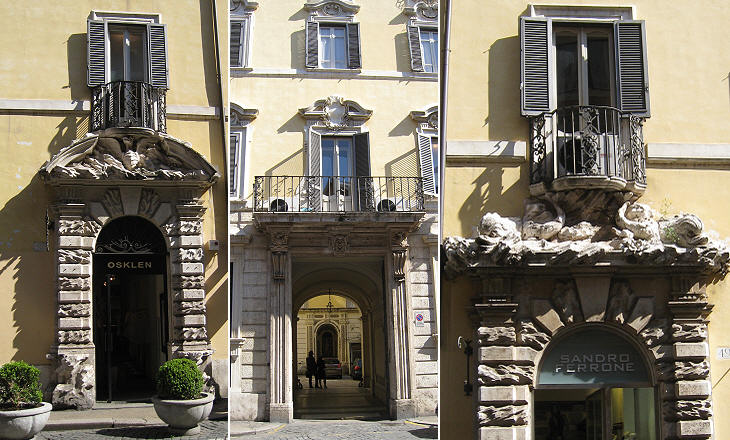 In the XVIIIth century many noble Roman families invested heavily in large buildings which were split into apartments and rented to the members of the emerging middle class and to the foreigners who visited Rome. Those who wanted a prestigious place to stay are likely to have asked the Boncompagni to rent them an apartment in their building in Via del Babuino.
The decoration of the small portals is attributed to Domenico Gregorini and clearly shows the influence of Gian Lorenzo Bernini. 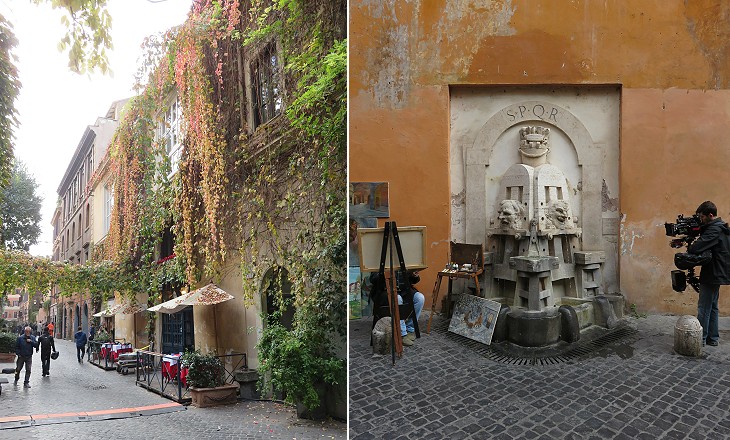 The Via Margutta is a street of studios and stables, crossed at the upper end by a little roofed gallery with a single window, like a shabby Bridge of Sighs. Horses are continually being washed and currycombed outside their stable doors; frequent heaps of "immondezzajo" make the air unfragrant; and the perspective is frequently damaged by rows of linen suspended across the road from window to window. Unsightly as they are, however, these obstacles in no wise affect the popularity of the Via Margutta, either as a residence for the artist, or a lounge for the amateur. Fashionable patrons leave their carriages at the corner, and pick their way daintily among the gutters and dust-heaps. A boar-hunt by Vallatti (it opens in another window) compensates for an unlucky splash; and a campagna sunset of Desoulavey (it opens in another window) glows all the richer for the squalor through which it is approached.
Amelia B. Edwards - Barbara's History - 1864.
Via Margutta is a very quiet street parallel to Via del Babuino where many artists moved their studios when Via del Babuino became a too expensive location. In 1875 Augustus C. Hare (Walks in Rome) recorded 11 studios of painters and 3 of sculptors in Via Margutta. In 1927 it was decorated with a fountain by Pietro Lombardi with symbols of the arts. You may wish to see a page on the Bompiani, a family of painters who had their studio near Piazza di Spagna. 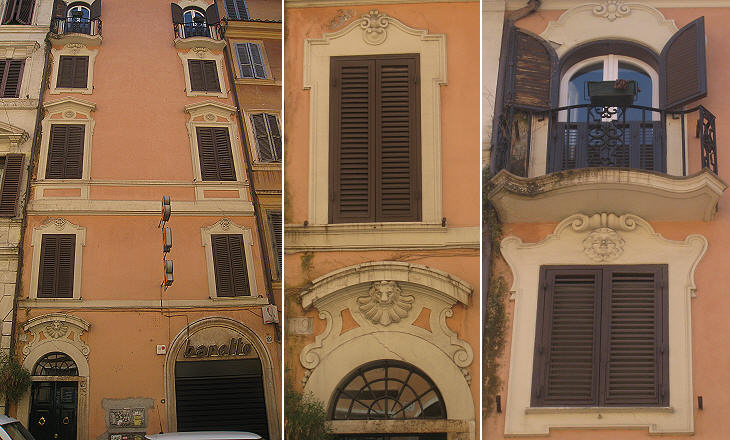 Giuseppe Vasi lived in an apartment inside Palazzo Farnese, where he received his customers; his son Mariano opened a shop at the beginning of Via del Babuino (from Piazza di Spagna); it was referred to as calcografia as it sold etchings, i.e. prints made from engravings on copper (khalkos in Greek). The address quoted by Mariano Vasi is Via del Babuino 122, which most likely coincides with the current 120 (Baretto shop). Conveniently located in the centre of the Strangers' Quarter, the shop had in stock all sorts of books and prints needed by the educated traveller. Mariano updated many times his father's Guide to Rome in Eight Itineraries.