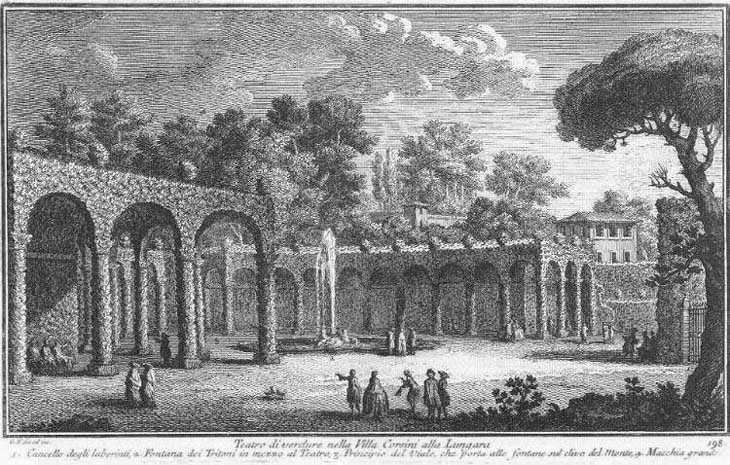 This 1761 etching by Giuseppe Vasi is a rare view of the "green theatre" of the gardens behind Palazzo Corsini alla Lungara; in the 1748 map of Rome by Giovan Battista Nolli there is no evidence of the theatre and of the fountain; a map by Paul-Marie Letarouilly drawn in ca. 1850 shows the fountain, but neither the theatre nor the two mazes which Vasi showed in the 1765 Grand View of Rome. 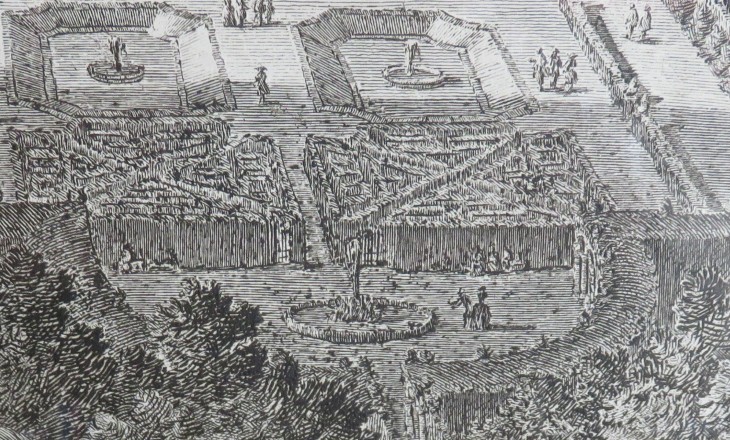 In the XIXth century Italian gardens were no longer fashionable even in Italy and it is likely that the Corsini felt that the burden of their very expensive maintenance was not justified.
The view is taken from the green dot in Letarouilly's map here below. In the description below the plate Vasi made reference to: 1) Entrance to one of the mazes; 2) Fontana dei Tritoni; 3) Alley leading to the fountains in the upper part of the Villa; 4) Wood on the Janiculum. 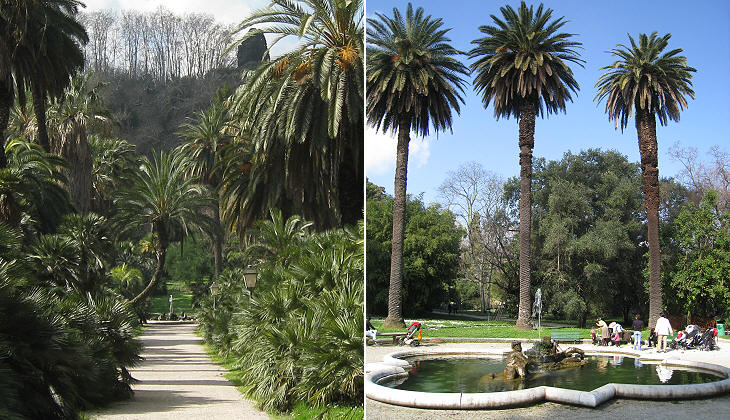 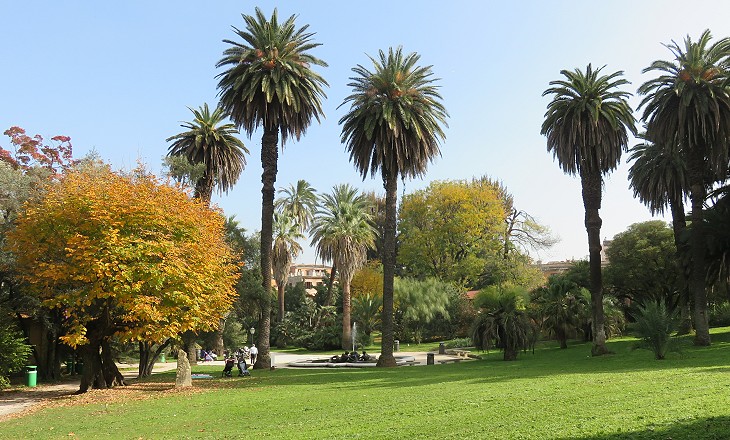 The site of the former "green theatre"

Behind the palace, on the slope of the Janiculan, are large and beautiful Gardens adorned with fountains, cypresses, and some grand old plane-trees. There is a fine view from the Casino on the summit of the hill.
Augustus G.C. Hare - Walks in Rome - 1874 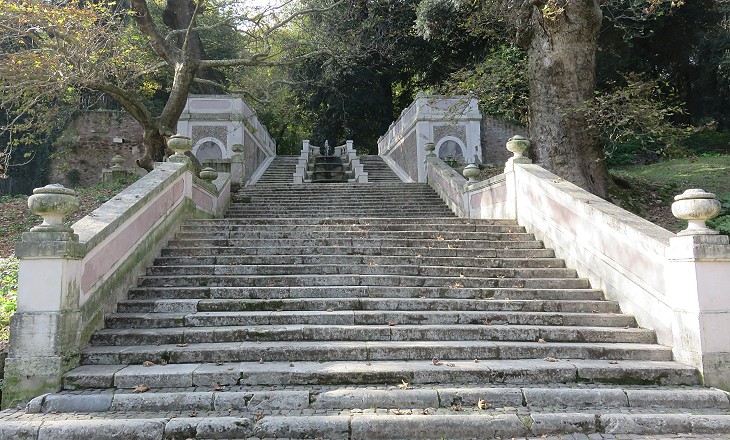 Cardinal Neri Maria Corsini, nephew of Pope Clement XII, bought the palace and the gardens in 1736. He was a man of great culture and wealth and he wanted his residence to be comparable to those of other great cardinals of the past such as Cardinal Ferdinando de' Medici and Cardinal Scipione Borghese, yet notwithstanding the enthusiastic description by Giuseppe Vasi, who dedicated one of his books to the Cardinal, the new gardens were relatively scarce of fountains and works of art. It must be said that the Corsini had already a villa outside Porta S. Pancrazio which they decorated with some ancient statues. 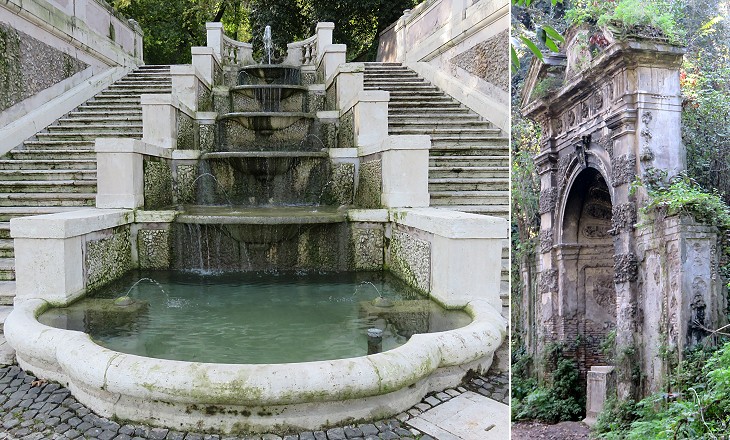 (left) Fountain designed by Ferdinando Fuga; (right) niche at the top of the fountain

Similar to what had been done in Villa d'Este, Ferdinando Fuga, the architect in charge of redesigning the garden, exploited the slope of the Janiculum for a series of cascading fountains which had at their top a niche where we know there was a statue; the niche however belongs to an earlier period, when Villa Corsini belonged to the Riario; it is decorated with roses, a heraldic symbol which can also be seen in Palazzo Riario or della Cancelleria. 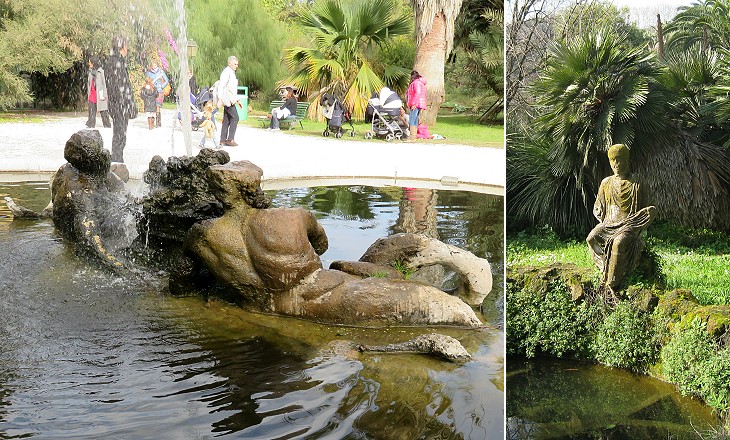 The vegetation of the Botanical Garden provides an unusual setting for some of the remaining elements of the XVIIIth century decoration. 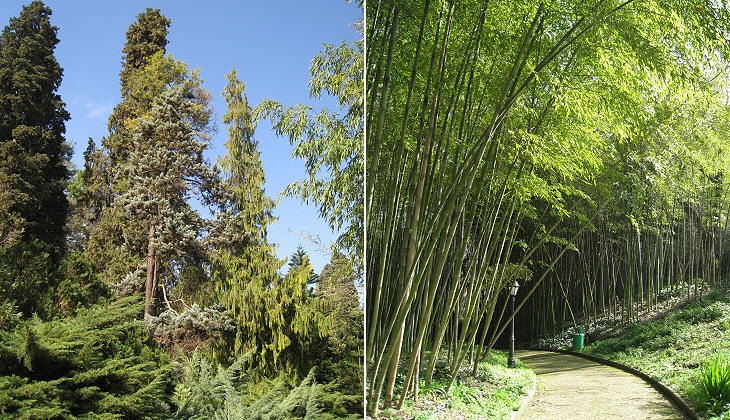 In 1543 in Pisa and in 1545 in Florence Luca Ghini, an Italian botanist, founded the first botanical gardens; that of Florence was called Giardino dei Semplici because the medicaments directly obtained from a plant were called semplici (simples). Pope Alexander VII founded a botanical garden behind Acqua Paola and in 1820 Pope Pius VII decided to move it to Palazzo Salviati. 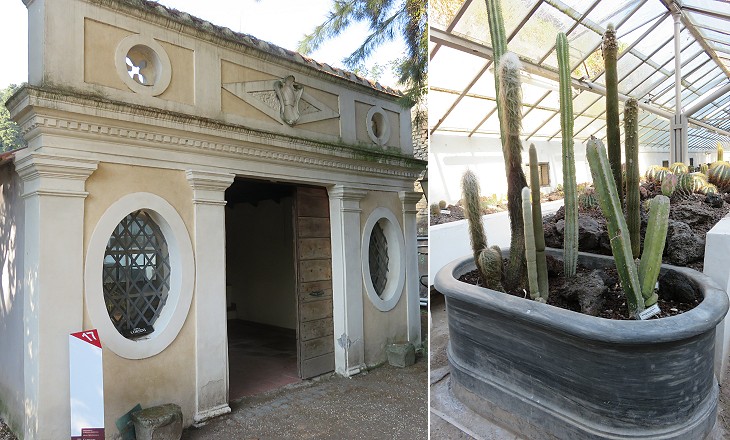 The Corsini built a greenhouse to shelter there the citrus trees they grew in pots during winter. Today, with other modern greenhouses, it is used for plants which require specially dry or humid conditions. The mildness of the climate of the Eternal City allows many different plants to grow in the open air. 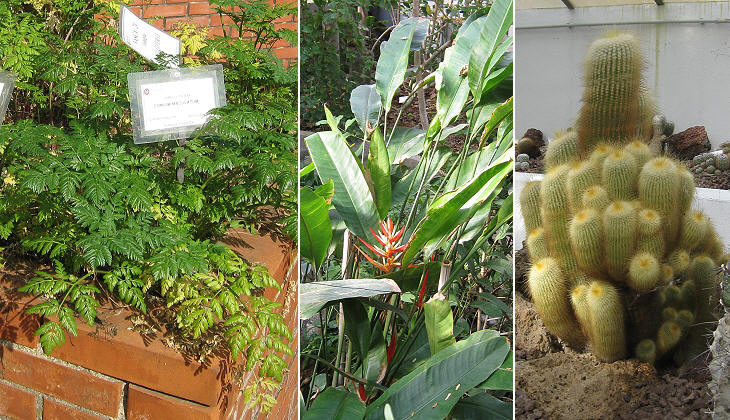 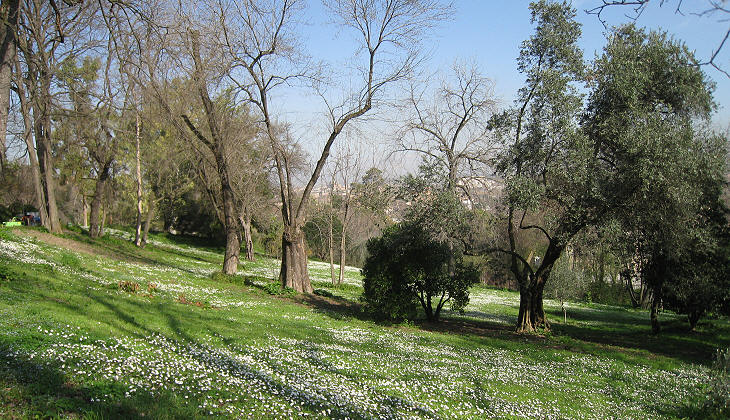 March 2, 2010, a carpet of daisies announces the end of winter

A magnificent porter in cocked hat and grand livery conducted the visitors across the quadrangle, unlocked the ponderous iron gates of the gardens, and let them through, leaving them to their own devices, and closing and locking the gates with a crash. They now stood in a wide avenue of ilex, whose gloomy boughs, interlacing overhead, effectually excluded the sunlight; nearly a quarter of a mile further on, the ilexes were replaced by box and bay trees, beneath which the sun and shade divided the path between them, trembling and flickering on the ground and invading each other's dominions with every breath of wind. The strangers heard the splash of fountains as they walked onwards by banks precipitous as a hill-side, and covered with wild rank herbage and tall trees. Stooping to gather a flower, they almost started, as looking up, they saw, rising against a sky fabulously blue, the unfamiliar green ilex and dark cypress spire.
Margaret Roberts - Mademoiselle Mori - 1860 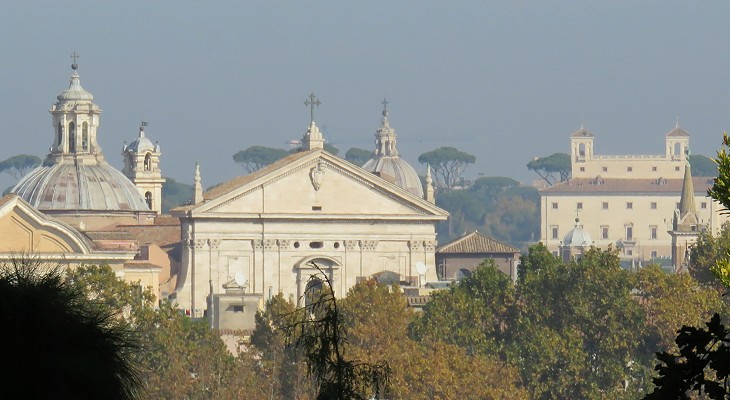 View of S. Maria in Vallicella in the foreground and of Villa Medici in the background

The Botanical Garden occupies most of the eastern slope of the Janiculum; in the past Villa Corsini reached the peak of the hill where there was a small casino; it was pulled down to make room for Monumento a Giuseppe Garibaldi. 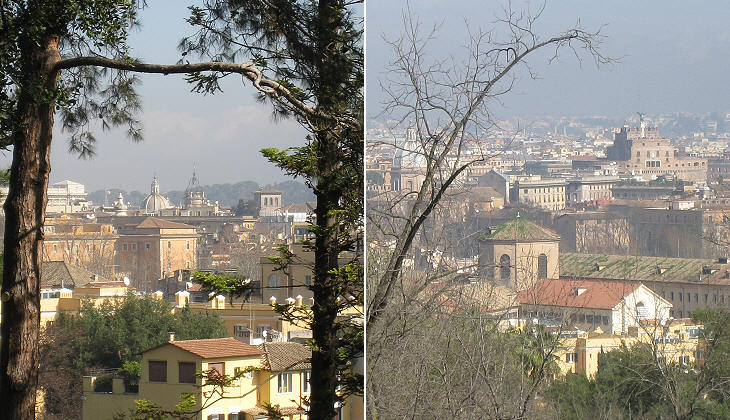 By gradually walking along the alleys leading to the upper part of the gardens, the views progressively include a larger section of the city. 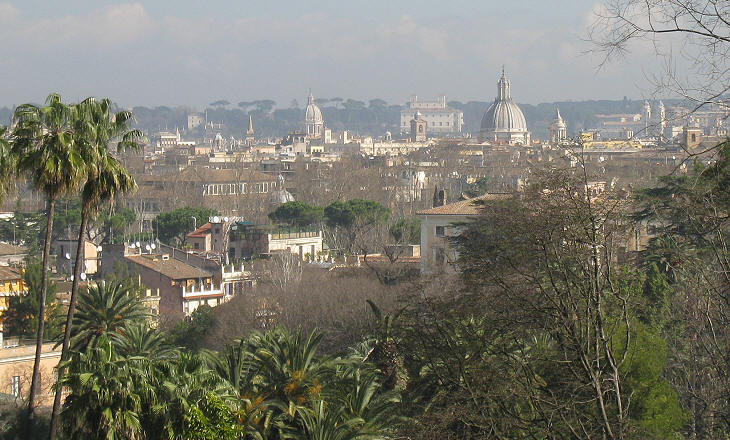 View from the highest point of the gardens towards S. Agnese in Agone and S. Carlo al Corso