The page covers:
The plate by Giuseppe Vasi
Today's view
Villa Mattei and its Obelisk
Valle delle Camene and S. Maria in Tempulo
Exhibits from the Museums 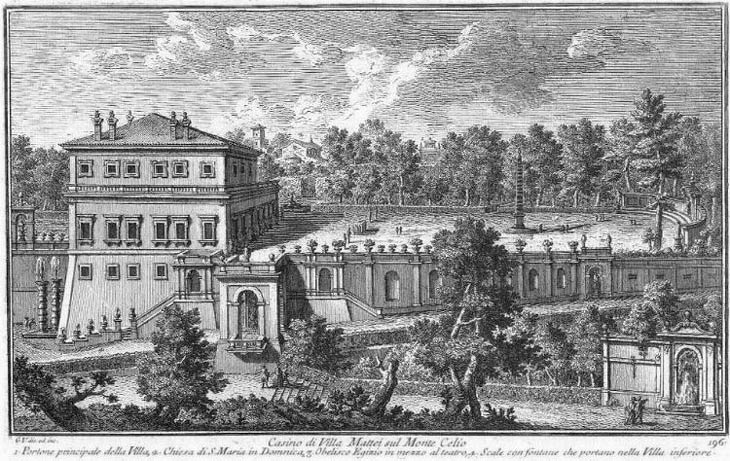 This 1761 etching by Giuseppe Vasi was based on previous views of Villa Mattei; perhaps Vasi "copied" them because at his time the villa was already suffering from poor upkeep; a few years later, in 1770, Duke Giuseppe Mattei sold the majority of the ancient statues which decorated the gardens and the casino.
The view is taken from the secret garden which was located at a lower level than the small casino; in this way Vasi made the casino look larger by showing the walls which supported it. The main entrance to the villa was located at the other end of the garden, near S. Maria in Dominica. The green dot in the small 1748 map shows the point from which the view was taken. In the description below the plate Vasi made reference to: 1) Main entrance; 2) S. Maria in Dominica; 3) Obelisk; 4) Steps leading to the lower part of the gardens. The map shows also 5) Valle delle Camene. 1) and 2) are shown in other pages.

The view in September 2008: (left) from the former secret garden; (right) from the main entrance

The view shown in the plate is today obstructed by trees which have been planted in the former secret garden. The casino was significantly enlarged and modified during the XIXth century. In 1925 Villa Mattei was acquired by the City of Rome and in 1928 its gardens were opened to the public; the casino houses Società Geografica Italiana and its rich library on late XIXth century Italian explorations of the Horn of Africa.

Villa Mattei and its Obelisk 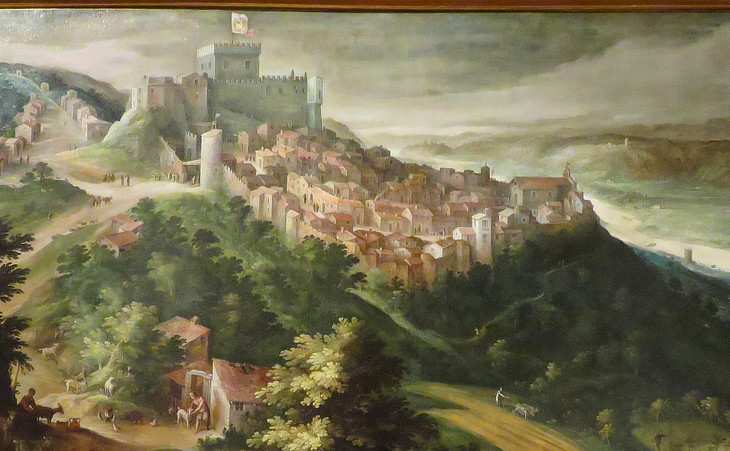 Galleria Nazionale d'Arte Antica a Palazzo Barberini: detail of a 1601 painting by Paul Bril, depicting Giove, a fiefdom of the Mattei near Amelia and Bomarzo in the River Tiber valley. It decorated a hall of Villa Mattei

The Mattei family is recorded from the end of the XIIIth century; they had houses in Trastevere and during the XVIth century the Mattei di Giove, a branch of the family, built several palaces in Rione Sant'Angelo. 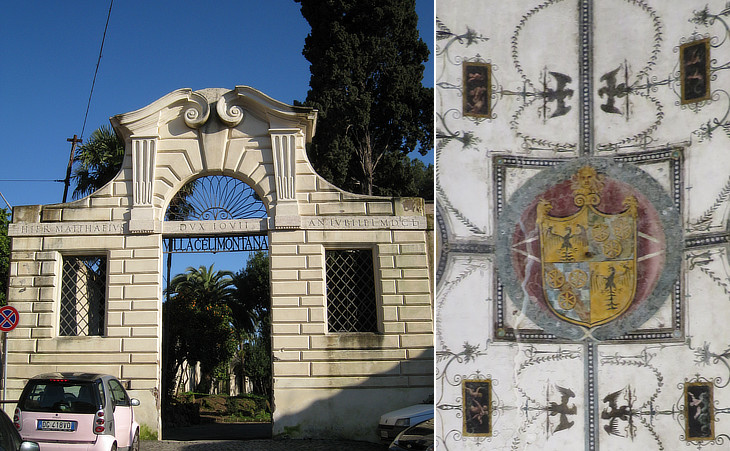 (left) 1650 entrance; (right) Loggetta Mattei on the Palatine: detail of the ceiling with the Mattei coat of arms

Hard by St. Domnica stands the Villa of the Duke Matthei, where I saw the Neat-house full of curious Statues, and crusted on the outside with rare anticaglie.
Richard Lassels' The Voyage of Italy, or a Compleat Journey through Italy in ca 1668
In 1581 Ciriaco Mattei di Giove commissioned Giacomo del Duca the design of a small casino on a property he had bought on the Caelian Hill; for this reason Villa Mattei is today best known as Villa Celimontana (on the Mons Caelius). The gardens of Villa Mattei were enlarged in 1650 by Girolamo Mattei who opened a second entrance opposite SS. Giovanni e Paolo; the Mattei had another villa on the Palatine, of which only a small loggia survives. 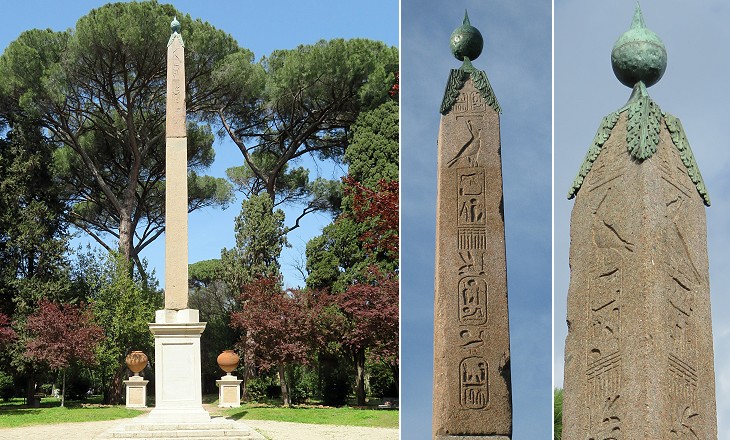 Views of the obelisk which was located in the amphitheatre

In 1564 the Mattei financed the restoration and embellishment of the portals of S. Maria in Aracoeli where they had their family chapel; perhaps this is the main reason why in 1582 the Senate of Rome presented Ciriaco Mattei with a small Egyptian obelisk which stood at the foot of the long staircase leading to that church.
The obelisk is very small; its hieroglyphs make reference to Pharaoh Rameses II; it was brought from Heliopolis to Rome to decorate a Temple to Isis.
During the XVIth century (and until very recently) it was thought that the ancient Circus Flaminius was located near the Mattei di Giove palace; Ciriaco Mattei decided to use the obelisk to recreate the ancient circus at his villa; because it was too small, it was placed on a tapered granite stone.
The original design of the amphitheatre (as the reproduction of Circus Flaminius was called) was modified in the XIXth century and the obelisk was moved to an isolated section of the gardens; after a very long period of neglect during which the obelisk was hidden by scaffoldings, in October 2009 its restoration was completed; it is now very easy to distinguish the original obelisk from the supporting stone (see a page on all the obelisks of Rome). 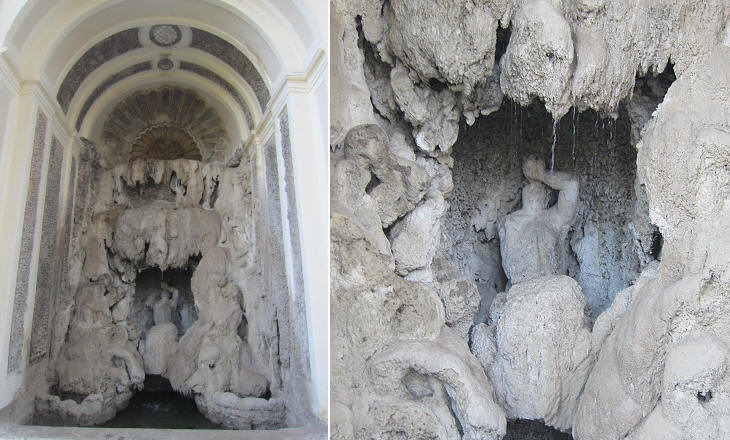 The curious Alley, Waterworks, Grots, Walks, Wetting places, and the intricate Labyrinth, are all very delightsom. Lassels
The villas of the ancient Romans had a facility where the host and his guests spent the hottest hours of the day, i.e. a grotto, an artificial cave. Italian Renaissance villas were provided with similar facilities. They usually had a fountain and were embellished with roughly cut statues (you may wish to see grottoes at Villa d'Este, Giardino di Boboli and Palazzo Rospigliosi). In 2012 a lengthy and careful restoration of the grotto of Villa Mattei was completed. It is located in the lower gardens. 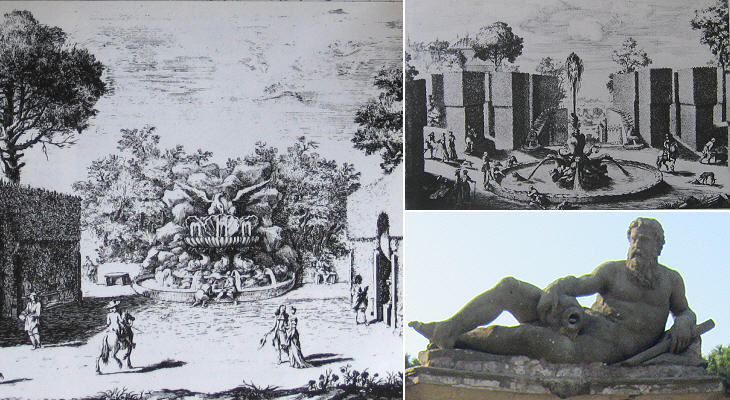 Villa Mattei had many fountains, two of which were perhaps designed by Bernini, but we know of them only through descriptions and etchings because the gardens were greatly modified during the XIXth century. Fontana del Fiume is the only fountain which has survived.
In the past the Mattei opened the villa to pilgrims who returned from their visit to the Sette Chiese: .. a material advantage is offered which makes that pilgrimage still more attractive. After completing the round and receiving a certificate to that effect, each pilgrim is given a ticket which entitles him to participate on certain days in a public festival in the Villa Mattei. Those who are admitted receive a collation of bread, wine and cheese or eggs; they are allowed to picnic in various parts of the garden, and the favourite spot is its small amphitheatre. Facing this stands the Casino of the Villa, where high society - cardinals. bishops, princes and noblemen - gathers to enjoy the spectacle, which owes its existence to a charitable bequest by the Mattei family.
J. W. Goethe - Italian Journey - March 1788 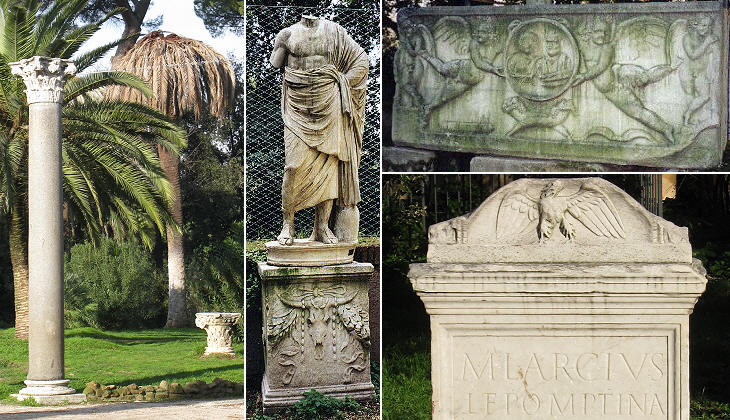 (left) Ancient column and capital; (centre) ancient statue on an altar; (right) an ancient sarcophagus and an inscription on a funerary monument

The gardens of today's Villa Mattei are embellished with ancient statues, columns, capitals, sarcophagi and inscriptions, but very few of them belong to the original decoration of the villa. 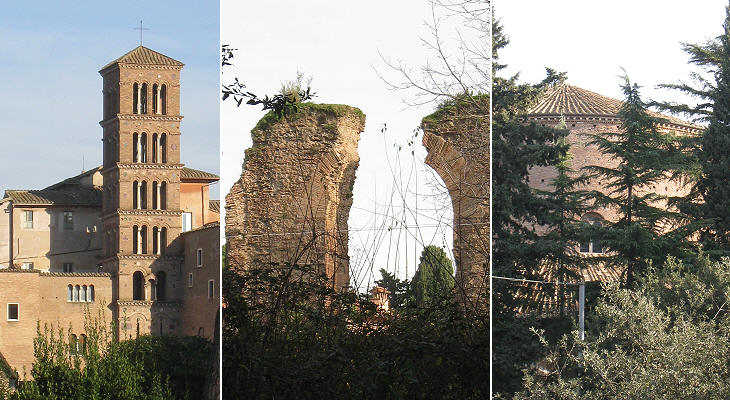 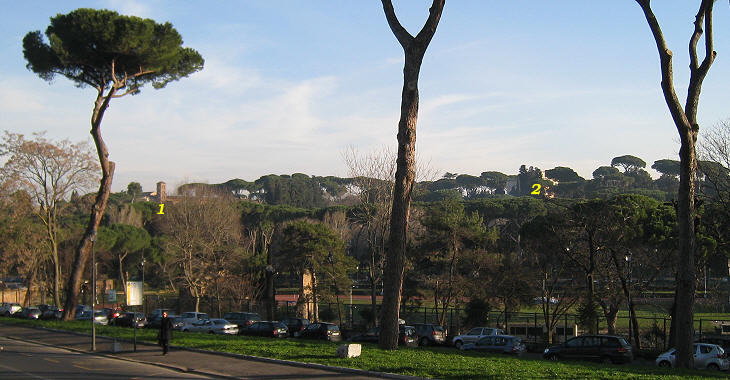 Villa Mattei included most of the valley between the Caelian and the Aventine hills. It was the site of a little wood with a spring where Numa Pompilius, the second king of Rome, used to meet Egeria, one of the Camenae, four nymphs who protected the springs (another location named after Egeria is along Via Appia).

A small medieval nunnery with a church was built near the spring and most likely above an ancient Roman temple; in the XIIIth century the nuns were moved to S. Sisto Vecchio; the church was abandoned and it was eventually turned into a hayloft inside Villa Mattei. Today the building belongs to the City of Rome and it is used for the celebration of civil marriages. 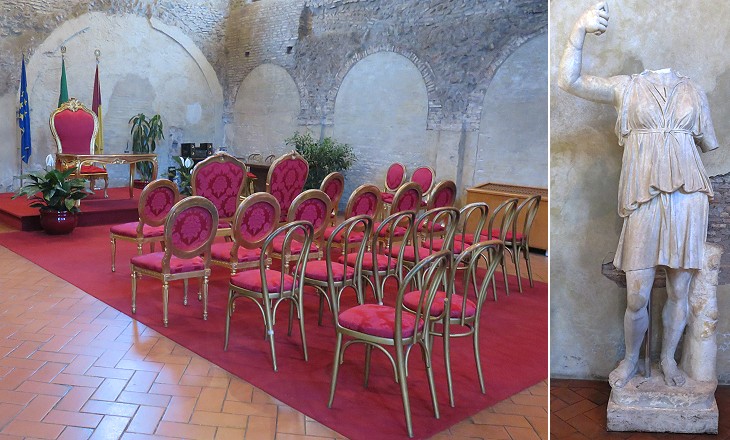 (left) Hall for civil marriages; (right) ancient statue of an amazon in the hall

You may wish to learn more about Valle delle Camene. 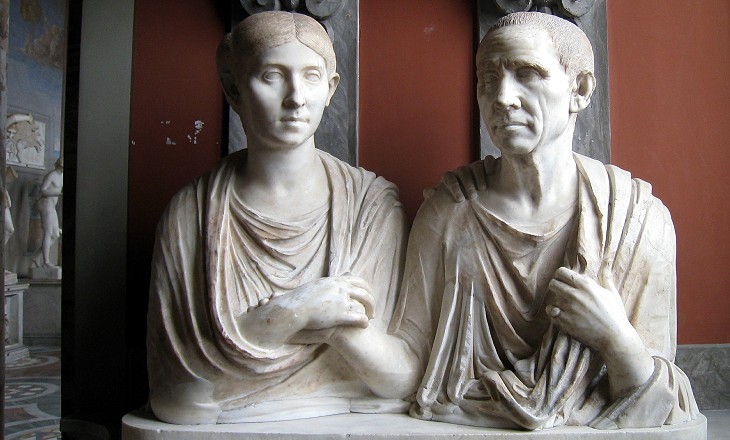 Among the rest I took particular notice of the heads of Brutus and Portia, Man and Wife in one Stone. Lassels
This funerary statue is one of the works of art which were sold in 1770 by Giuseppe Mattei. It had a (lost) inscription saying that it portrayed Marcus Gratidius Libanus and his wife Gratidia Chrite, but it was popularly known as Cato and Porcia (his daughter). They both committed suicide: the former at Utica in connection with Caesar's victories against Pompey and his followers; the latter after her husband Brutus was defeated at Philippi by Octavian and Mark Antony. We do not know anything about Gratidius and his wife apart that there is an apparent significant difference of age, but perhaps the woman died when she was still young (you may wish to see the funerary monument of Marcus Virgilius Eurysaces and his wife). The two join their right hands as they did on their wedding day. 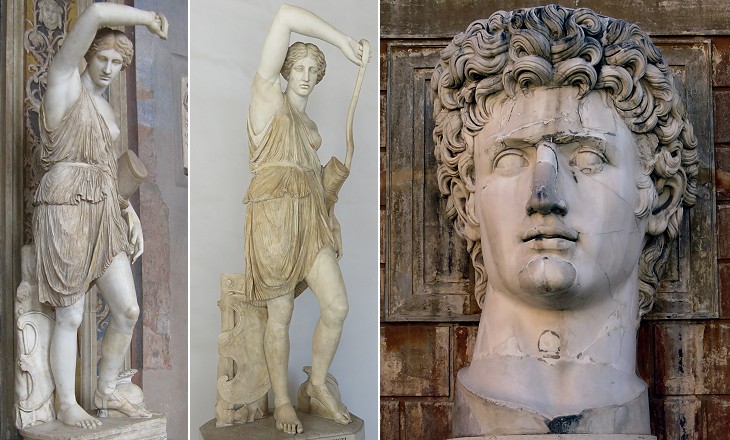 The most celebrated (sculptors) have also come into competition with each other (in ca 435 BC), because they had made statues of Amazons; when these were dedicated in the Temple of Artemis of Ephesus, it was agreed that the best one should be selected by the vote of the artists themselves who were present; and it then became evident that the best was the one which all the artists judged to be the next best after their own: this is the Amazon by Polycleitus, while next to it came that of Phidias, third Cresilas's, fourth Cydon's and fifth Phradmon's.
Pliny the Elder - Historia Naturalis - Book XXXIV. Translation by H. Rackham
The body of Amazzone Mattei belongs to a IInd century AD copy of the (lost) bronze original by Phidias, whereas the head belongs to another statue. A similar, but slightly different statue of an Amazon was found at Villa Adriana. In both statues you can see the pelta, the moon shaped shield of the Amazons, which eventually became a very popular decorative pattern (e.g. at the Hall of the Opus Sectile at Ostia).
The gigantic marble head of Emperor Augustus, was thought to portray Alexander the Great because of its ruffled hairstyle which is typical of the iconography of the Macedonian conqueror (see heads of the two side by side at the Archaeological Museum of Istanbul and a famous mosaic of Pompeii portraying Alexander). The Mattei sold it to Pope Pius VII in 1802, so it was one of the last works of art which left the villa. Although there are no actual records about the location where the head was found it is likely it decorated the Forum of Augustus. Some art historians suggest that it was made at the time of Emperor Claudius and that the resemblance between Augustus and Alexander was intentional.

Vatican Museums: front of a sarcophagus from Villa Mattei depicting episodes of the Gigantomachy, the battle between the Olympian Gods and the Giants, some of whom had serpent-tails for feet. On the left Artemis shoots Gration with an arrow, on the right Hecate singes Clytius with two torches; a gigantic frieze depicting this battle decorated the Altar to Zeus of Pergamum