Links to this page can be found in Book 10.

The page covers:
The plate by Giuseppe Vasi
Today's view In this additional etching to the view of Giardino Colonnese (or Colonna), Giuseppe Vasi showed the ruins of the Temple to Serapis, which was built by Emperor Caracalla, as they appeared before 1630. The image to the right is based on a plate in Le Antichità della Città di Roma, a 1565 book by Bernardo Gamucci (you can see it in another window); that to the left on information Vasi found in Roma Vetus ac Recens by Father Alessandro Donati, a teacher at Collegio Romano, which was published in 1638. Overall the two views are very similar (and they confuse the reader).
The Colonna incorporated the ruins of the temple into their medieval fortification system. They built a tower on one side of the ancient walls which was known as Torre Mesa, perhaps mezza (half) because it was very lean. According to Gamucci Emperor Nero watched the 65 AD fire of Rome from this tower, rather than from a tower built by Maecenas on the Esquiline Hill. Vasi used another drawing by Gamucci for his view of Foro di Nerva.
The ruins of the temple and Torre Mesa were pulled down by Duke Filippo I Colonna in 1630 by mining them: it was then discovered that the ancient entablature was carved in a single block of marble (which split into two major pieces because of the fall). The size of these two pieces was such that Filippo Colonna left them in the gardens and Vasi showed them (anticaglia) in the right lower corner of this plate. They were so admired that he showed them also in the plate covering Palazzo Colonna.
In the description below the plate Vasi made reference to: 1) anticaglia; 2) the temple as per the drawing by Bernardo Gamucci. The small 1748 map shows: 1) Giardino Colonnese; 2) Scuderie del Quirinale; the red dot indicates the approximate location of the marble pieces. 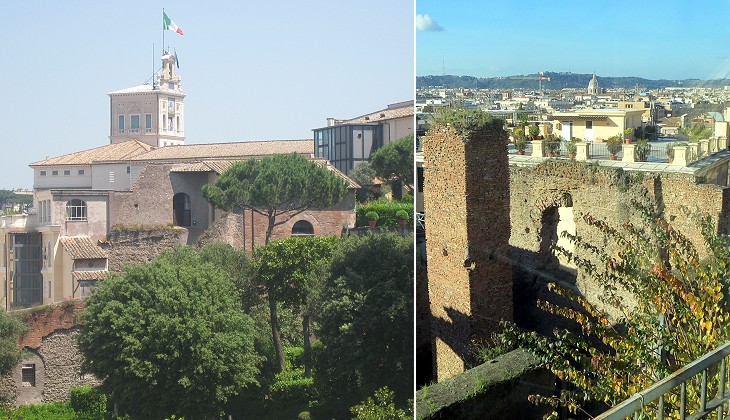 The walls of the ancient temple which had not entirely collapsed were incorporated into a casino at the northern end of the gardens. In 1927 this building was pulled down to make room for Pontificia Università Gregoriana and some ancient walls came to light and were restored.

For very many years the opportunity of visiting Giardino Colonnese and seeing the anticaglia was restricted to friends and guests of the Colonna. Since 2015 the garden is open to the public on Saturday mornings (guided tours) in conjunction with visits to the Colonna gallery of paintings. Templum Solis. Of this there was lately a piece standing in the Garden of the Columna upon monte cavallo. (..) It is now quite thrown down; only there remain in the Garden vast marble stones, the greater that ever I saw, and some of them curiously carved which came from the top of this building.
John Ray - Observations (..) made in a journey through part of (..) Italy in 1663
In general the IIIrd century AD is regarded as a period of decline for the Roman Empire, not only from a political and military viewpoint, but also in the artistic field. While this is true for the decoration of the buildings which tended to be repetitive, the decline did not impact on the technical capabilities associated with the construction of very large monuments, e.g. Caracalla's Baths and the walls built by Emperor Aurelian in a very short period of time. 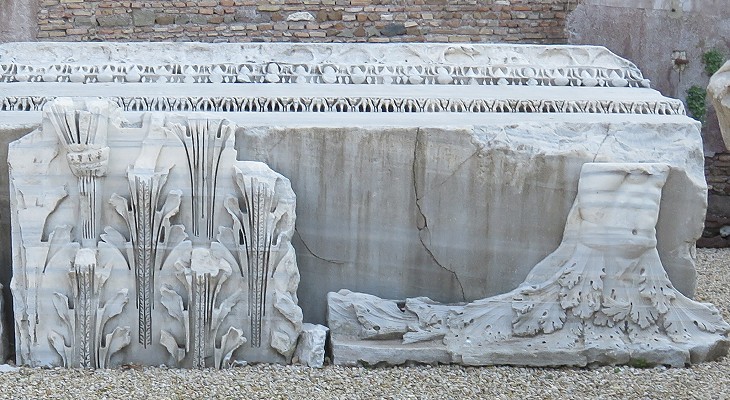 Detail of the decoration of the smaller marble piece

According to Gamucci the temple columns were 21m/68ft tall, but his drawing of the frieze (it opens in another window) does not seem to be accurate, so his measurements might have been exaggerated. The image used as background for this page shows a detail of the frieze which is based on acanthus leaves.