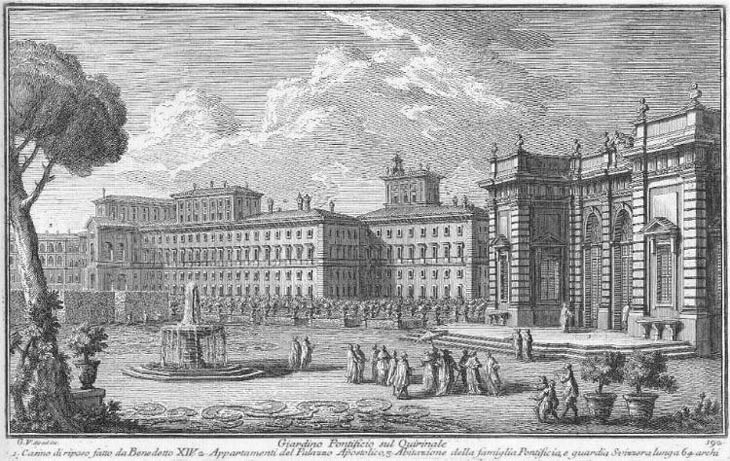 Giuseppe Vasi was an architect and not a painter, so in this 1761 etching he paid a lot of attention to Palazzo del Quirinale, rather than to its gardens. The view is interesting for its representation of the Papal court as it shows the Pope taking a stroll and wearing a round straw hat while an attendant shades him with a parasol. This hat is called saturno (it opens in another window) and its use, after a long period of neglect, was revived by Pope Benedict XVI.
The view is taken from the green dot in the small 1748 map here below. In the description below the plate Vasi made reference to: 1) Casino (small palace) built by Pope Benedict XIV; 2) Papal Apartments; 3) Buildings for housing the servants and the Swiss Guard (Manica Lunga). The small map shows also: 4) S. Maria Maddalena; 5) Palazzina del Segretario della Cifra. 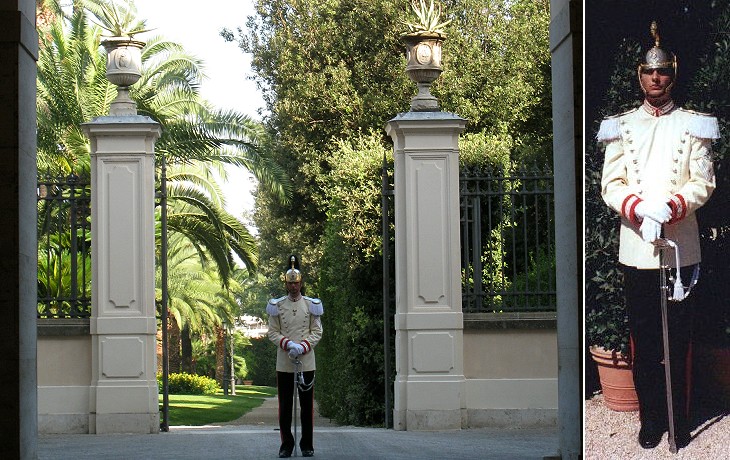 On the 10th November 1644: The garden, which is called the Belvedere di Monte Cavallo, in emulation to that of the Vatican, is most excellent for air and prospect; its exquisite fountains, close walks, grots, piscinas, or stews for fish, planted about with venerable cypresses, and refreshed with watermusic, aviaries, and other rarities. (..) I went to the Pope's Palaces at Monte Cavallo, where I now saw the garden more exactly, and found it to be one of the most magnificent and pleasant in Rome. I am told the gardener is annually allowed 2000 scudi for the keeping of it. Here I observed hedges of myrtle above a man's height; others of laurel, oranges, nay, of ivy and juniper. (..) Here are hydraulic organs, a fish-pond, and an ample bath.
John Evelyn's Diary and Correspondence
The Palace is today the residence of the President of the Italian Republic. Corazzieri is a special regiment of Carabinieri, entrusted with the security of the President. 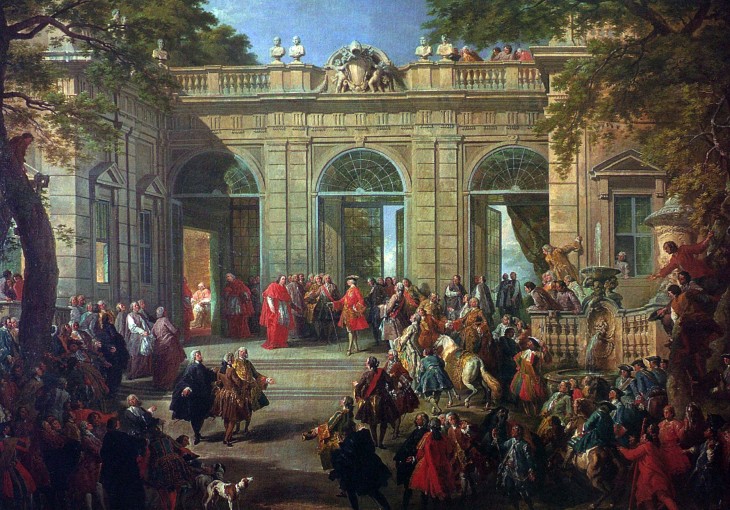 Giovanni Battista Pannini: Don Carlos (Charles of Bourbon) pays a visit to Pope Benedict XIV, who waits for him outside the garden casino in November 1744 - Museo Nazionale di Capodimonte in Naples

In the etching depicting Porta Pia, which was published in 1747, Vasi showed Charles of Bourbon entering the city gate. He would have most likely loved to show the scene depicted by Pannini in 1746, because he was very fond of Charles (his landlord at Palazzo Farnese), but when he published the etching in this page Pope Benedict XIV had been replaced by Pope Clement XIII. Vasi knew that to portray an event in which the reigning pope was not involved was not a sensible thing to do.

The photos of this section are framed because they seem to come from a Golden Age when people were very relaxed about terrorist threats. 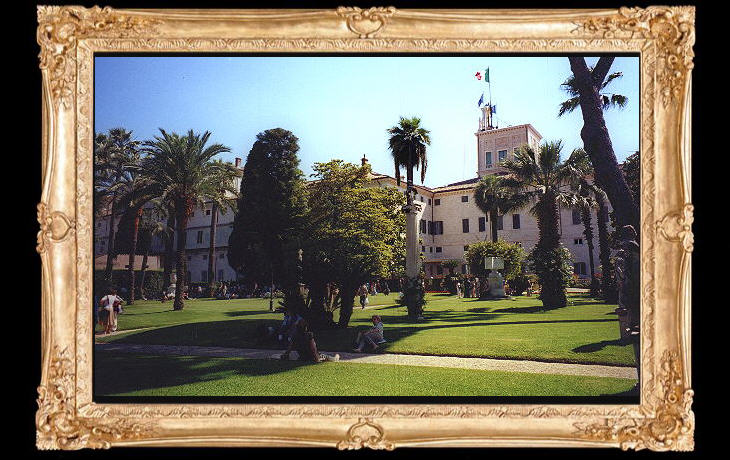 On June 2, 2000 Carlo Azeglio Ciampi, President of the Republic between 1999 and 2006, opened the gardens to the public for the first time and on that occasion it was possible to take pictures of the gardens and of the palace.
June 2 is Republic Day in Italy because it is the anniversary of the referendum held on June 2, 1946 by which Italians chose republic rather than monarchy as institutional form of government.
The design of the gardens has been modified by planting many palms, but it is still possible to identify most of the elements of Vasi's plate. 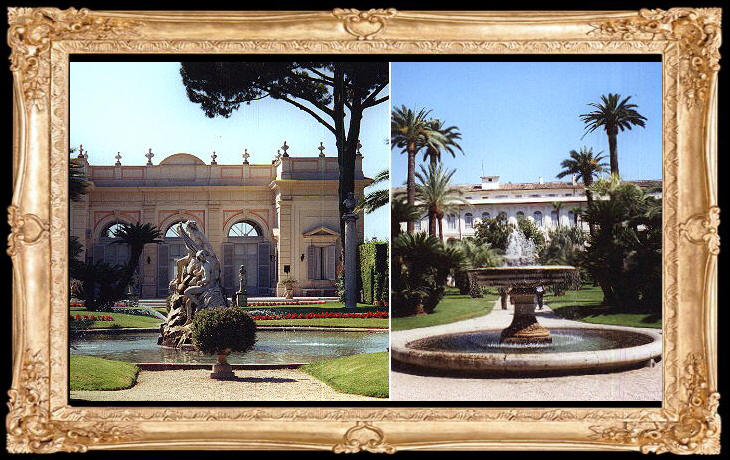 (left) Coffee House; (right) a fountain of the gardens

The casino designed in 1741 by Ferdinando Fuga for Pope Benedict XIV has not been modified; it is now known as the Coffee House. Actually it is a closed portico on the western edge of the gardens which enjoys commanding views over Rome. 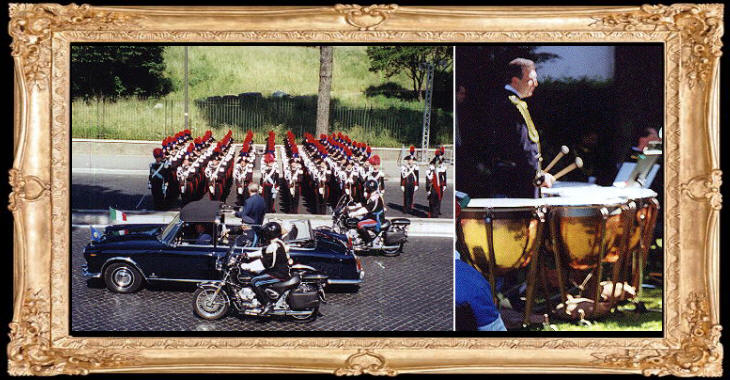 In the morning President Ciampi reviewed a selection of the Italian armed forces (you may wish to see the 2005 parade). In the afternoon the crowds in the gardens were entertained by various bands.

The gardens seen from a tethered balloon at Villa Borghese

Today the gardens can be visited by small groups in guided tours every day. It is however strictly forbidden to take pictures. 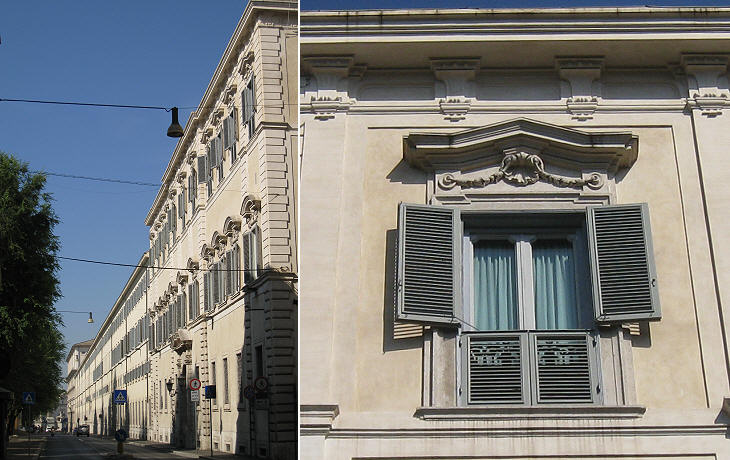 The long building which served as barracks for the Swiss Guard is called Manica Lunga (Long Sleeve) and as Vasi says it was designed by Gian Lorenzo Bernini during the pontificate of Pope Alexander VII. In 1730-1732 it was completed by Ferdinando Fuga, who designed at its northern end a small palace for Segretario della Cifra, the assistant to the pope in charge of ciphering his secret letters. Today it houses the private apartment of the President of the Republic. 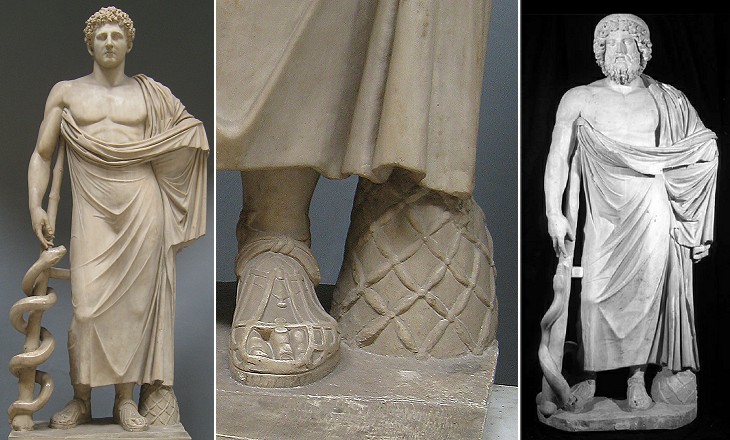 This statue was found at the northern end of the gardens in an area where possibly a Temple to Salus stood. Salus was an ancient Roman goddess related to safety, prosperity and health. Eventually her cult was associated with that of Asclepius, Greek god of Medicine and son of Apollo. The head of this fine statue is original. Because it does not match the traditional iconography of the god art historians tend to believe it portrays a famous doctor rather than the god. Svetonius reports that: In honour of his physician, Antonius Musa, through whose care Emperor Augustus had recovered from a dangerous illness, a sum of money was raised and Musa's statue was set up beside that of Aesculapius.
The object near the left foot is an omphalos, a reference to Delphi, where Apollo was worshipped. 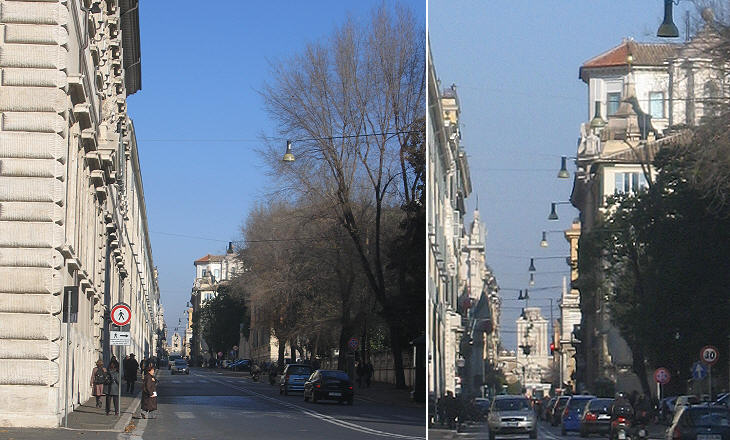 Several monasteries/nunneries stood opposite Manica Lunga. When in 1871 Palazzo del Quirinale became the residence of the excommunicated King of Italy, their presence became an embarrassment. In 1888, on the occasion of a visit to Rome by German Emperor Wilhelm II, it was decided to redesign the surroundings of Palazzo del Quirinale and the nunnery of S. Maria Maddalena was replaced by a public garden which houses Monumento a Carlo Alberto. The nearby Jesuit church of S. Andrea al Quirinale was spared because of its artistic value.