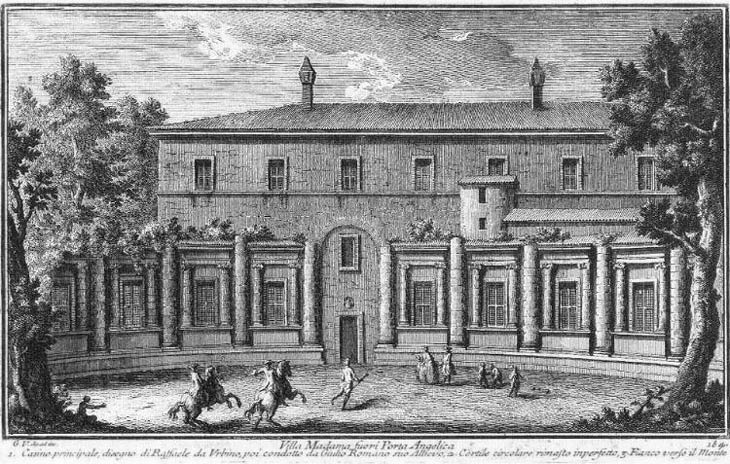 Villa Madama is located between Porta Angelica and Ponte Milvio; when in 1760 Giuseppe Vasi visited it he found the site in such poor condition that he decided to leave a record of the building for future generations; he therefore included a second view and a plan of Villa Madama in his last book of etchings. At the time the villa belonged to the King of Naples, who inherited it from his mother, the last of the Farnese; similar to Palazzo Farnese and Orti Farnesiani the villa was eventually stripped of its works of art which were sent to Caserta and Naples to embellish the royal palaces. The etching shows a spontaneous vegetation creeping along the small roofs of the circular courtyard and the casino gives the impression of being closed.
In the description below the plate Vasi made reference to: 1) Main casino designed by Raphael and completed by Giulio Romano; 2) circular courtyard which was not completed; 3) side towards the hill (Monte Mario). The small late XIXth century map here below shows: 1) Villa Madama; 2) site of today's Museo dell'Arma del Genio; 3) Ponte Molle (Milvio). 3) is shown in another page. 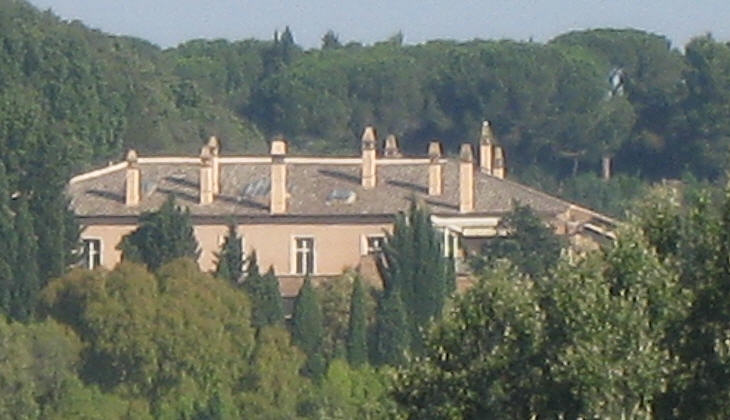 Villa Madama was acquired by the Italian State in the 1930s; it is now used by the Italian Foreign Office for dinners, conferences and for hosting prominent visitors; for security reasons the premises are not open to the public and only the upper part of the casino is visible from a great distance. To the right of the building there is evidence of a modern terrace. 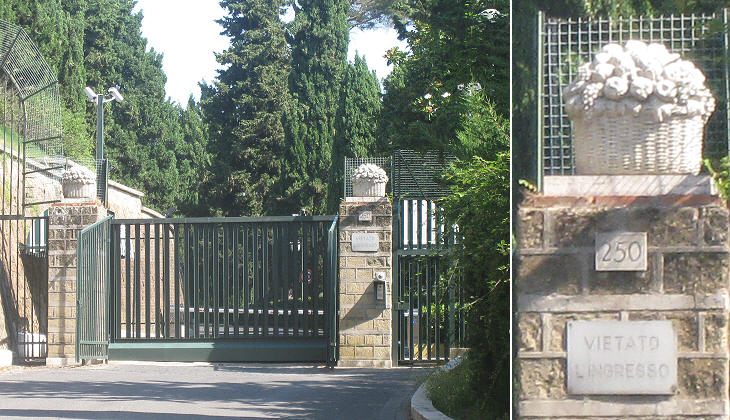 According to Vasi, Villa Madama was the first of its kind in Rome; while it is true that Casino del Belvedere was built a few years earlier, the design of the former anticipated those of many later villas, while the latter had the outer appearance of a small castle.
Villa Madama was built by Cardinal Giuliano de' Medici on the site of a farm bought by his cousin Pope Leo X; the casino was designed by Raphael, while Antonio da Sangallo the Younger gave advice on the structures needed for terracing the hill; after the death of Raphael, his pupil Giulio Romano completed and decorated the casino. 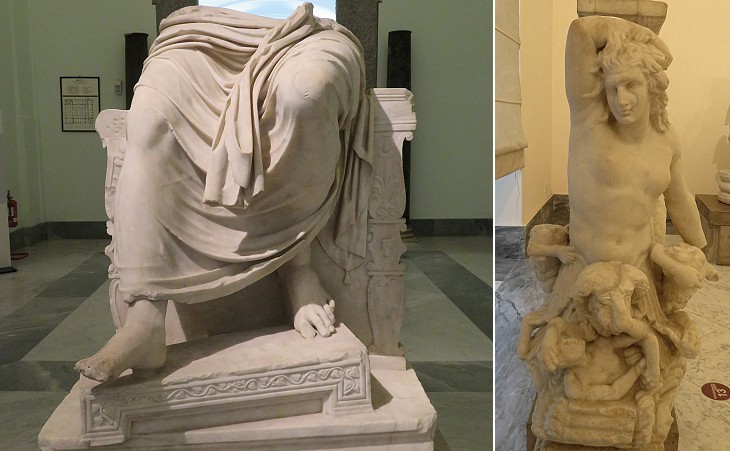 In 1523 Cardinal Giuliano de' Medici was elected Pope Clement VII and after his death in 1534 the villa was inherited by Alessandro de' Medici and eventually by Margaret his widow; she was the natural daughter of Emperor Charles V and later on she married Ottavio Farnese, grandson of Pope Paul III. Madama is a reference to Margaret which applies also to Palazzo Madama, but this second property returned to the Medici after her death. 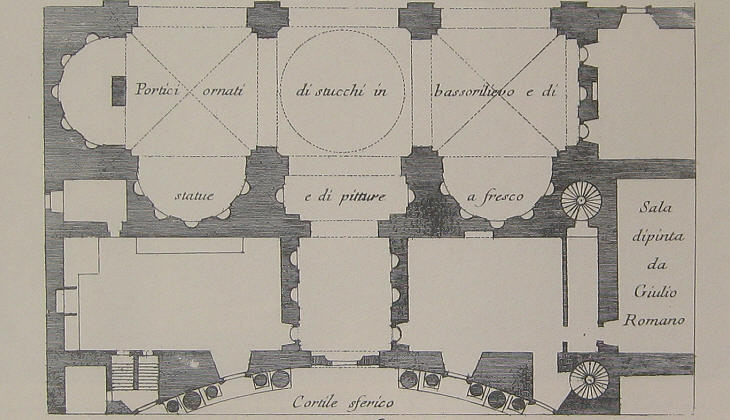 Plan of the casino by Giuseppe Vasi, showing that the building was very small

The place has become the shabbiest farmhouse, with muddy water in the old pièces d'eau and dunghills on the old parterres. The "feature" is the contents of the loggia: a vaulted roof decorated by Giulio Romano; exquisite stucco-work and still brilliant frescoes; arabesques and figurini, nymphs and fauns, animals and flowers - gracefully lavish designs of every sort. Much of the colour - especially the blues - still almost vivid, and all the work wonderfully ingenious, elegant and charming. Apartments so decorated can have been meant only for the recreation of people greater than any we know, people for whom life was impudent ease and success. Margaret Farnese was the lady of the house, but where she trailed her cloth of gold the chickens now scamper between your legs over rotten straw. It is all inexpressibly dreary.
You may wish to read more of Henry James' account of his visit to Villa Madama in 1873. 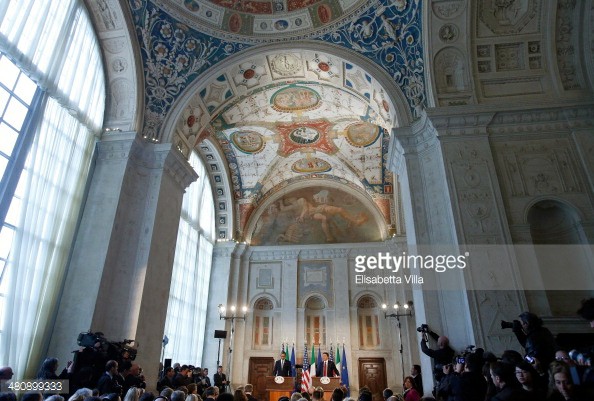 Official photo of a press conference in the loggia designed by Raphael at Villa Madama in March 2014. The image used as background for this page shows one of the niches of the loggia 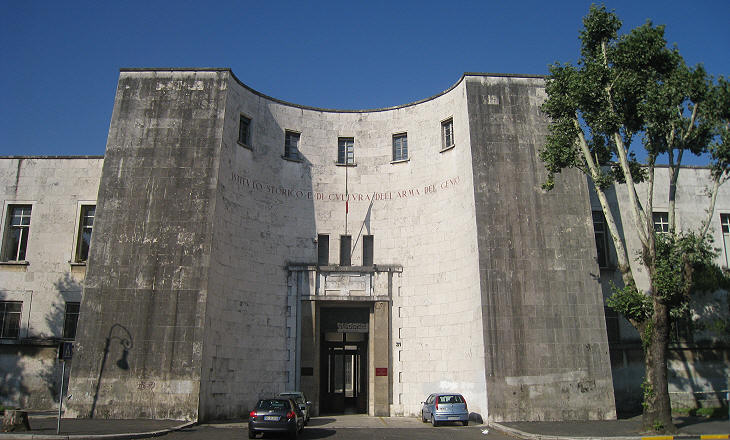 The area at the foot of the hill where Villa Madama is situated was developed in the 1930s and it retains some examples of the monumental style which characterized that period, e.g. Foro Italico; the project for this building was developed by Gennaro de Matteis, an officer of Arma del Genio (Military Engineering). You may wish to see a page on EUR for more examples of this style.