Porta Pertusa
(Vasi at work in the Grand View of Rome) 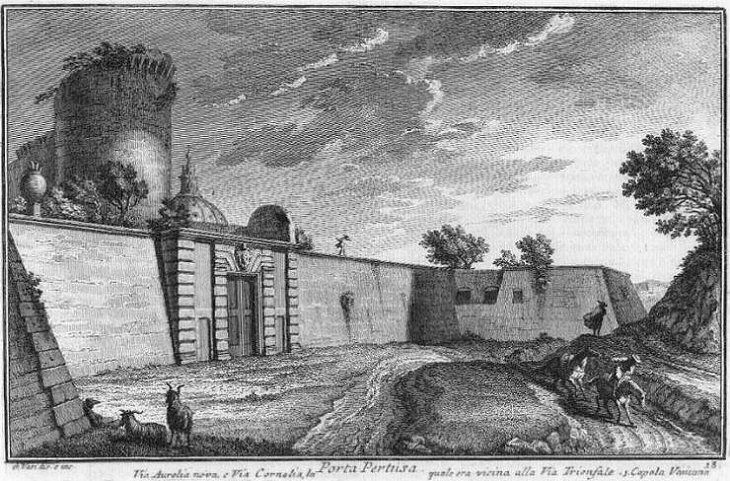 When in 1562 Pope Pius IV decided to build new walls around the Vatican, some of his advisers suggested not including in the new curtain the western end of the Vatican hill, in order to limit costs. The Pope however preferred to follow the advice Antonio da Sangallo the Younger had given to his predecessor Pope Paul III in 1536 and the new walls reached the top of the hill much the same as those built by Pope Leo IV in ca 850 had done. Torre di S. Giovanni, the round tower behind the gate, was the western limit of the medieval walls, where a gate called Porta Pertusa already existed.
Probably Pope Pius IV had in mind to develop the area between S. Pietro and the walls, as he had done in Borgo Pio, but neither he nor his successors did it and the gate at the top of the hill was eventually closed because no road led to it from the city. This explains why the etching Giuseppe Vasi made in 1747 showed Porta Pertusa closed.
The view is taken from the green dot in the small 1748 map here below (left) which shows: 1) Dome of S. Pietro; 2) Porta Pertusa; 3) Villa Alberici. The 1883 map (right) shows: 4) Madonna del Riposo (S. Maria del Buon Riposo); 5) Villa Carpegna; 6) Casale di S. Pio V. 1) is covered in another page. 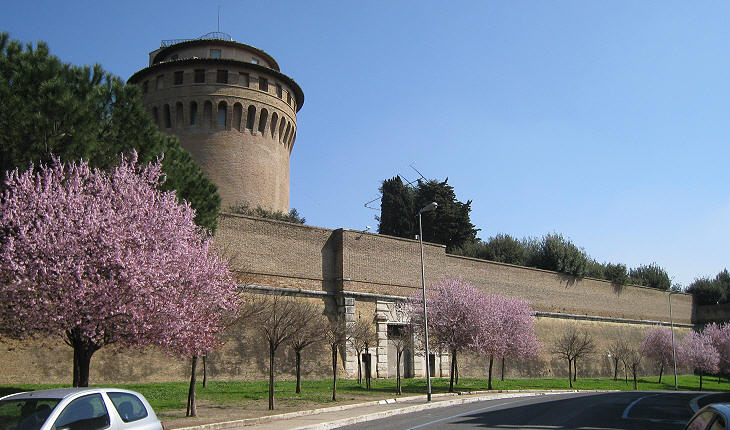 The walls have been raised (most likely by Pope Gregory XVI) and the dome of S. Pietro is no longer visible; Torre di S. Giovanni was restored by Pope John XXIII and it is used to host important guests of the popes. 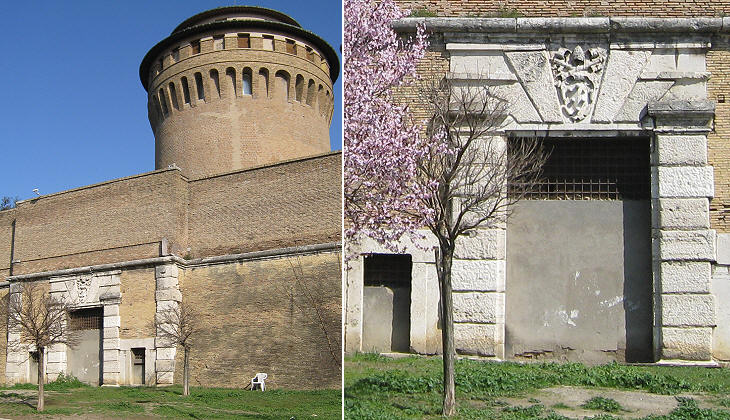 In his 1761 guide to Rome Vasi attributed the coat of arms on the gate to Pope Leo X, but in the text accompanying the etching he was less certain about it and he wrote that it was a Medici coat of arms. Pope Pius IV (Giovanni Angelo de' Medici) was not a member of the Florentine Medici family, but he was "allowed" to use their coat of arms.
The name of the gate means "pierced" and the word is thought to indicate that Porta Pertusa was opened in the medieval walls after they were built. The image used as background for this page shows a posterula, a small opening in the walls near the gate. 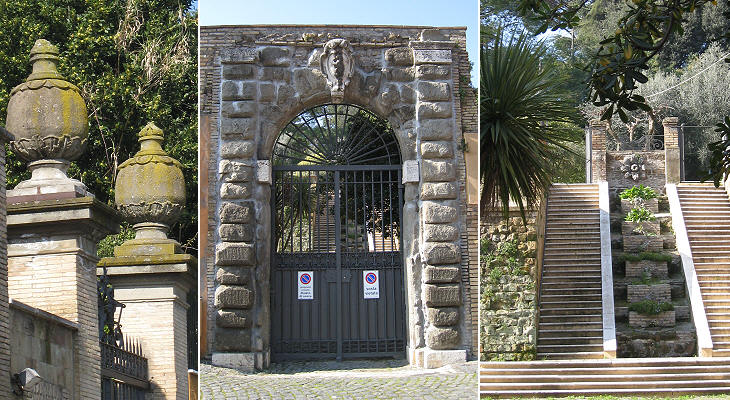 The Alberici were a minor noble family from Orvieto; their villa was made up of small buildings very near the entrance and it was located along Via delle Fornaci, a road which branched off Via Aurelia at Villa Carpegna and led to Porta Cavalleggeri; Villa Alberici was built in the second half of the XVIth century and it was modified before the death in 1622 of Pirro Alberici, whose name and portrait can be seen on one of the remaining buildings. At Vasi's time it belonged to Collegio dei Penitenzieri. 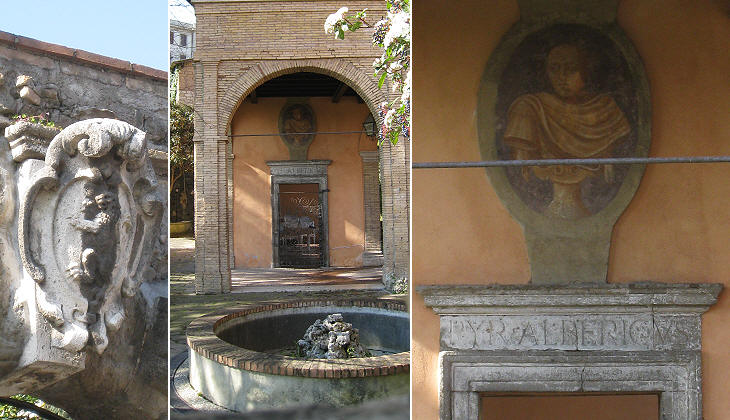 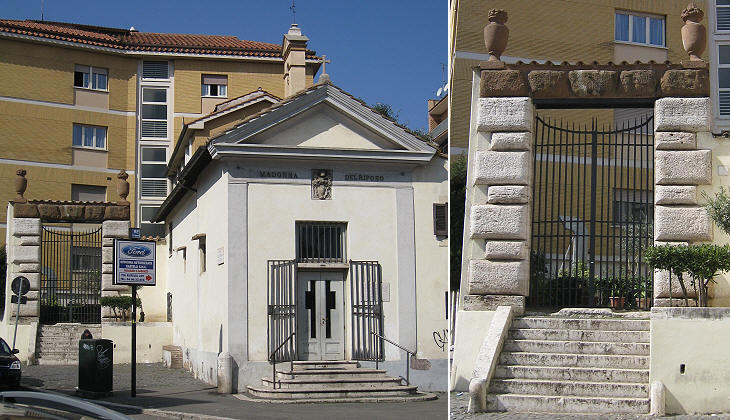 This small chapel was founded by Pope Pius IV, but it is mainly associated with Pope Pius V, his successor, who used to stop and pray here on his way to his summer residence on Via Aurelia. Buon riposo means good rest and it can be a reference to the chapel providing rest to travellers or more generally to death. This second meaning is confirmed by the inscription over the slit of the alms box which says "he who lives well, dies well". 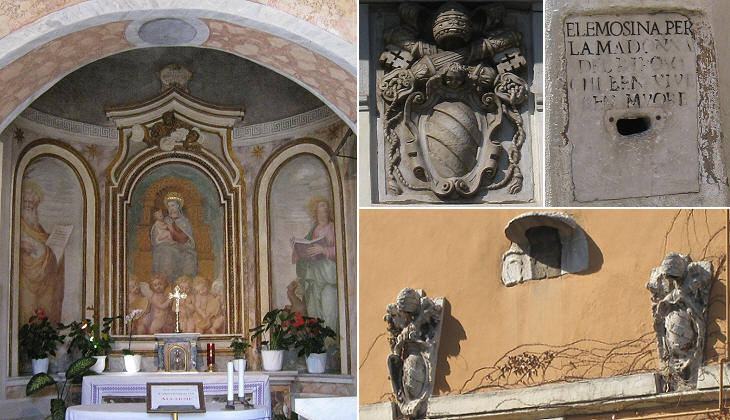 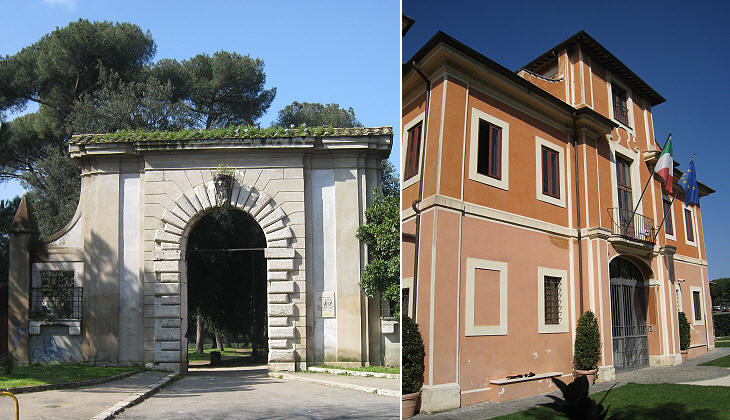 Villa Carpegna was both a farm and a summer residence and its main building is an attempt to meet both requirements. It was most likely designed by Giovanni Antonio de' Rossi for Cardinal Gaspare Carpegna towards the end of the XVIIth century.
The Carpegna were a noble family from Montefeltro, a region near Urbino. The Cardinal had a palace in Rione Sant'Eustachio and other members of the family had a palace in Rione Trevi. 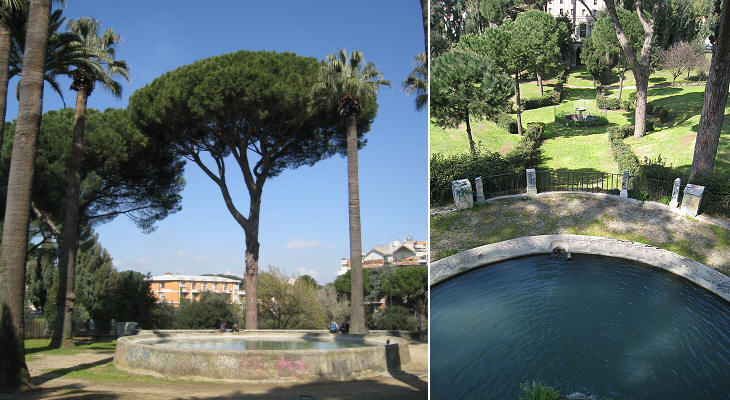 Villa Carpegna was situated in a rather remote location; this explains why it did not attract the interest of painters or engravers. In the XIXth century its gardens were modified to adapt them to patterns in fashion at the time; in the XXth century the property was sold and divided up; this led to not properly maintaining the series of fountains which from the back of the main casino crossed a small valley and ended in a nymphaeum. 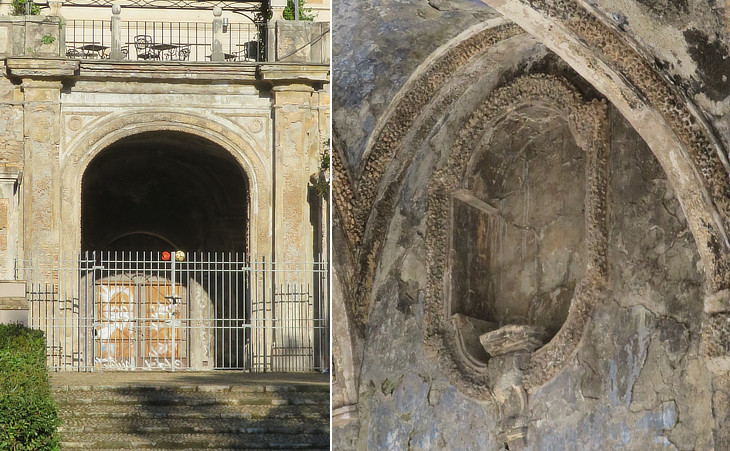 In 1981 the City of Rome acquired the casino and a minor part of the gardens, but it has been unable to fully restore the fountains and their decoration. 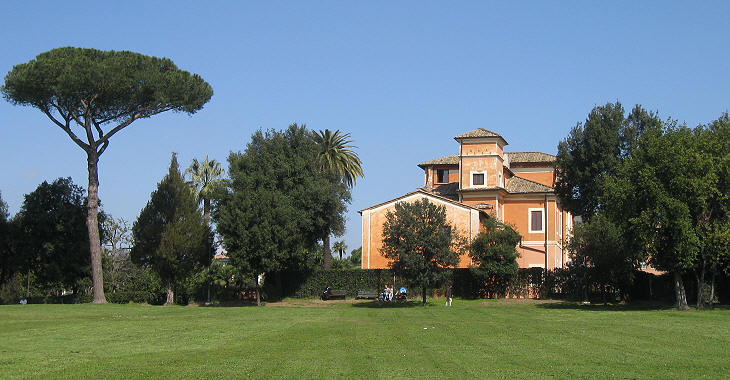 Cardinal Carpegna was appointed Cardinal Vicario (i.e. Deputy Bishop of Rome) in 1671 by Pope Clement X. He was requested by the Pope to effectively control the access to the ancient Christian catacombs and cemeteries in order to prevent the stealing of relics. In this capacity Cardinal Carpegna was able to gather a formidable collection of Roman coins and jewels. The collection was bought by Pope Benedict XIV in 1743. Its classification took two years because it had more than 4,000 items. 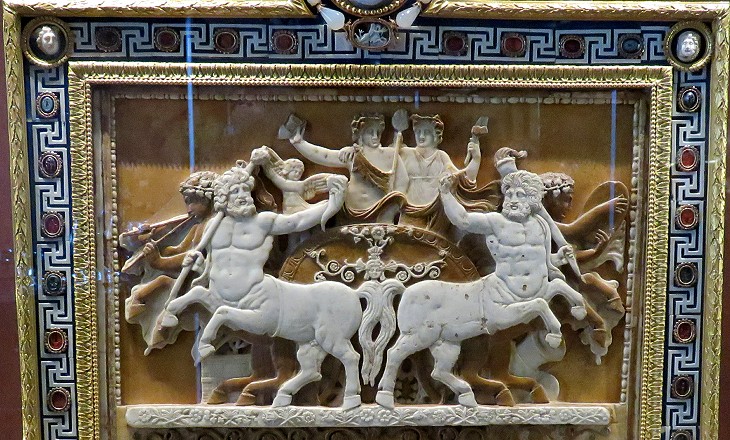 During the French occupation of Rome in 1798 the best pieces of the collection of coins and jewels were shipped to Paris. Some of them were donated by Napoleon to other European monarchs. After the restoration of the Papal authority in Rome in 1814 Pope Pius VII and Antonio Canova who negotiated on his behalf were not able to recover the entire collection. 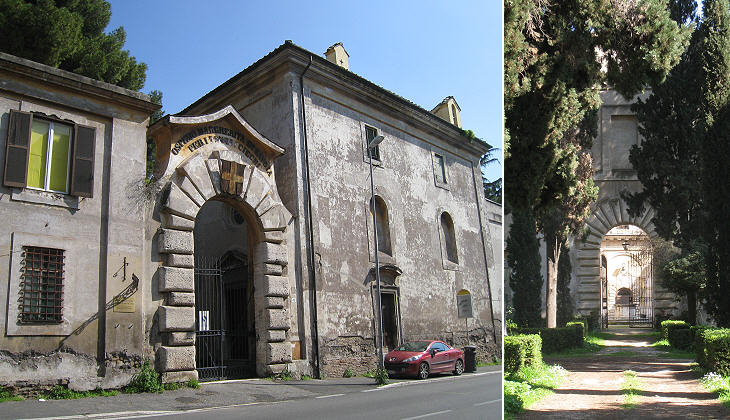 (left) Entrance along Via Aurelia Antica which ends at Porta S. Pancrazio; (right) tree-lined walkway leading to the main building

Pope Pius V built in the open countryside behind the Vatican walls a residence where he often went to rest. It was most likely designed by Nanni di Baccio Bigio, a Florentine architect. Other works by him were Porta del Popolo, Palazzo Salviati and Tor S. Michele at Ostia. 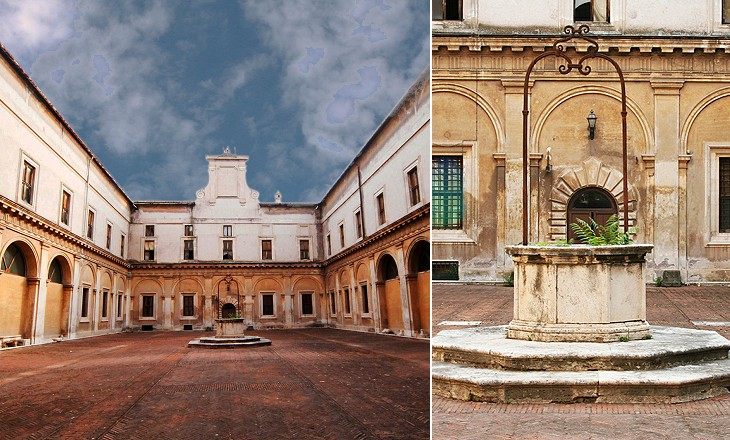 Main courtyard and its well

At the end of the XIXth century Casale di S. Pio V became a house for the blind; this required several modifications to the building; nonetheless the main courtyard retains the original design. Today it houses a university campus. 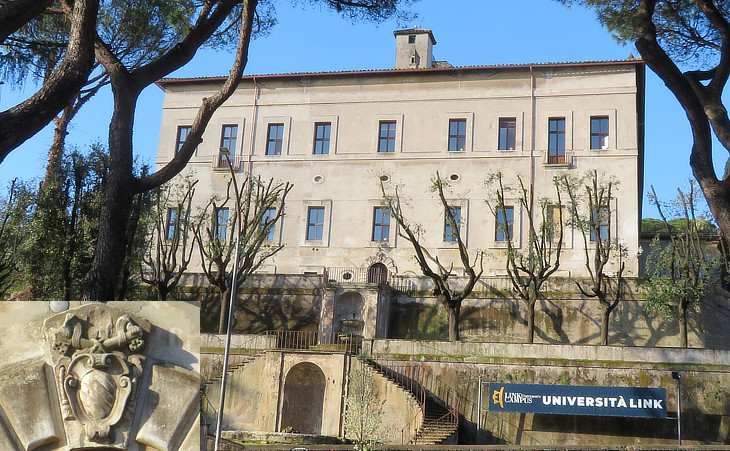 The Walls between Porta Pertusa and Porta Angelica 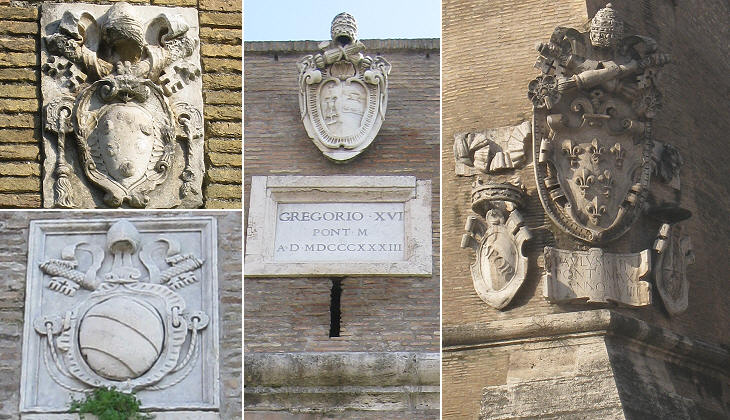 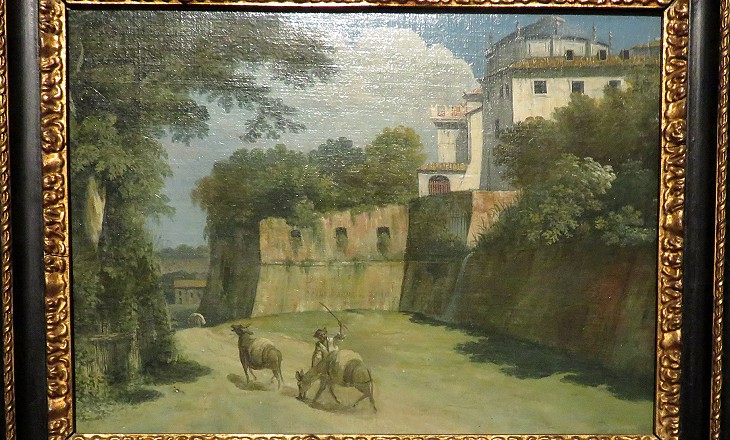 Museo di Roma a Palazzo Braschi: XIXth century painting showing the walls where now the entrances to Musei Vaticani are located and Sala Rotonda of Museo Pio-Clementino above the walls

The plate by Vasi shows that there was not a proper road surrounding the walls at Porta Pertusa. This situation continued for the whole of the XIXth century until Viale Vaticano was built along the walls in order to link Prati, a new neighbourhood with Via Aurelia. (left) Walls near Porta Pertusa; (centre) 1932 entrance to Musei Vaticani, a work by Giuseppe Momo who designed also other buildings inside the Vatican City State; (right) detail of the 2000 entrance with the coat of arms of Pope John Paul II by Cecco Bonanotte

The opening of Viale Vaticano eventually led to giving an independent entrance to Musei Vaticani, which until then were reached by going around the apse of S. Pietro to Atrio dei Quattro Cancelli. 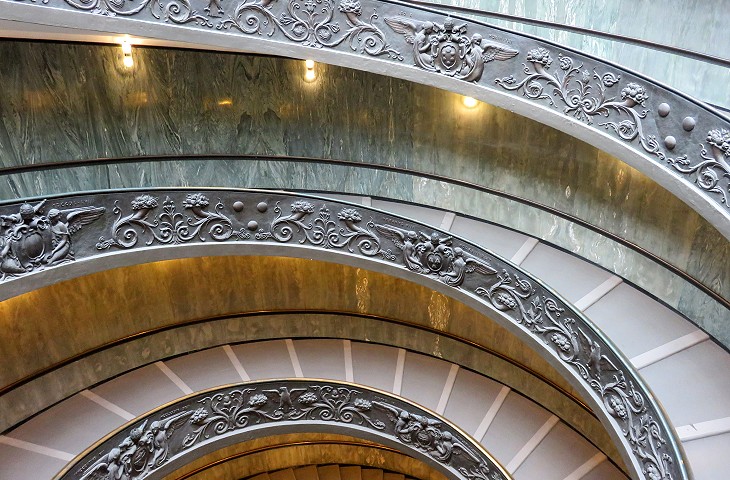 Musei Vaticani: double staircase by Giuseppe Momo in the 1932 entrance

Next plate in Book 1: Porta Angelica.
Next step in Day 8 itinerary: Giardino Pontificio.