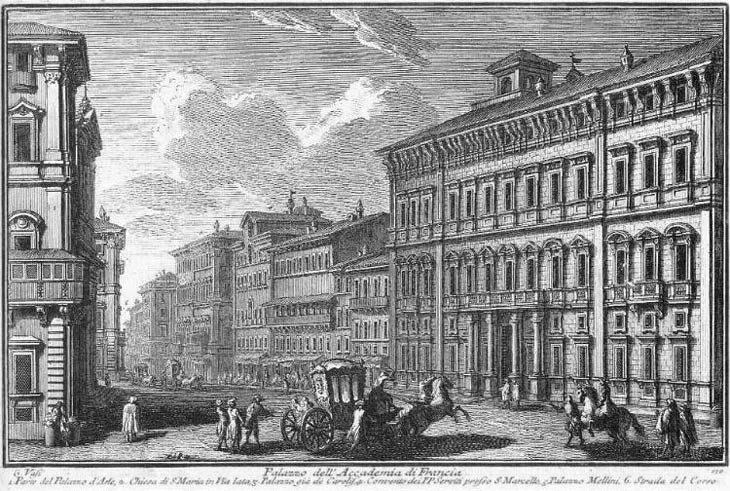 In this 1759 etching Giuseppe Vasi showed old Via Lata (Wide Street), the first section of Via del Corso; the view includes part of Palazzo d'Aste (on the left side) which is located at the beginning of the street, but not the building which stood opposite it and which significantly narrowed the passage between Via del Corso and Piazza Venezia.
The view is taken from the green dot in the 1748 map below. In the description below the plate Vasi made reference to: 1) Palazzo d'Aste; 2) S. Maria in Via Lata; 3) Palazzo De Carolis; 4) Convento di S. Marcello; 5) Palazzo Mellini; 6) Strada del Corso. 2), 3), 4) and 5) are shown in other pages. The map shows also 7) Palazzo del'Accademia di Francia; 8) Via di S. Romualdo. The dotted line in the small map delineates the border between Rione Pigna (lower section) and Rione Trevi (upper section). 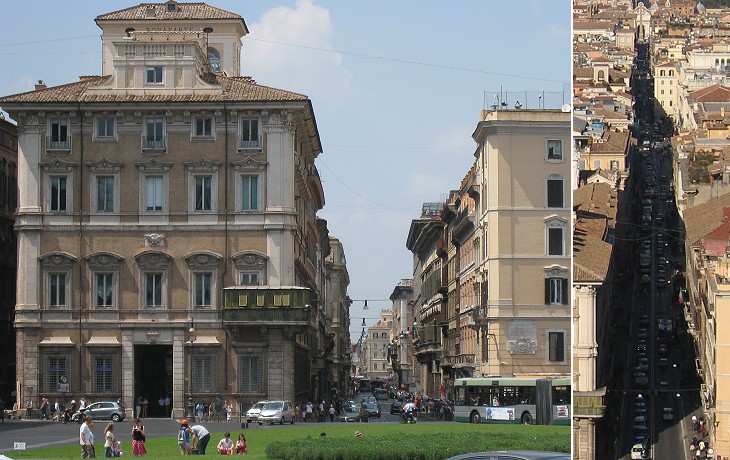 (left) The view in July 2009; (right) Via del Corso with Piazza del Popolo at its end seen from Terrazza delle Quadrighe in December 2007. The length of the street is roughly one mile

When Piazza Venezia was redesigned at the end of the XIXth century, the (yellow painted) building opposite Palazzo d'Aste was in part pulled down in order to improve the access to Via del Corso.
Palazzo d'Aste retains the covered balcony which granted an excellent viewpoint for watching the arrival of the horse races which took place in the evening along Via del Corso during carnival.
The horses wear no harness of any kind. Spurs, in the shape of spiked balls, are attached by cords to their bodies, but the places they touch are protected until the last moment by pieces of leather. (..) At last the rope falls, and they're off. So long as they are still in the square (Piazza del Popolo), each one strives to gain the lead, but once they enter the Corso, the space is so narrow (..) that overtaking is almost impossible. In the Piazza Venezia grooms have been waiting for the horses. When they arrive, they are skilfully caught and tied up in an enclosure. (..) And so the festivity for which thousands have been waiting for hours is over in a flash.
J. W. Goethe - February 1788 - Italian Journey - translation by W. H. Auden and E. Mayer - Collins 1962. 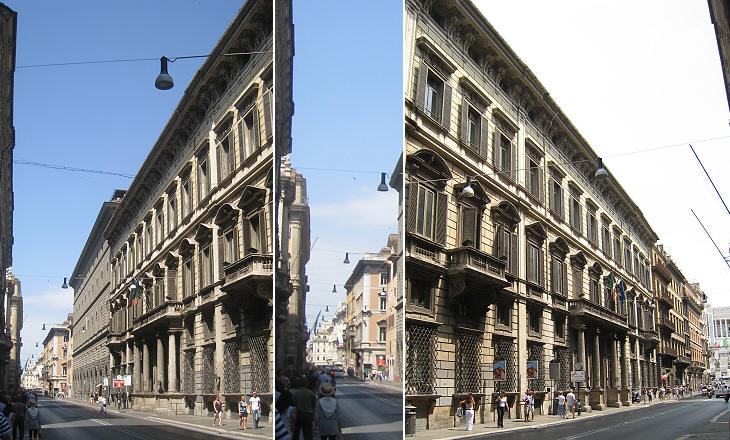 (left) Palazzo dell'Accademia di Francia and after it the modern rear façade of Palazzo Odescalchi; (centre) enlargement showing S. Maria in Via Lata and Palazzo De Carolis on the left side of the street and Convento di S. Marcello and Palazzo Mellini on the other side; (right) view towards Piazza Venezia

The buildings along the first section of Via del Corso have not been significantly modified except for the Florentine Renaissance rear façade of Palazzo Odescalchi. The façade of Palazzo dell'Accademia di Francia is not completely flat because its central section slightly projects from the southern one. 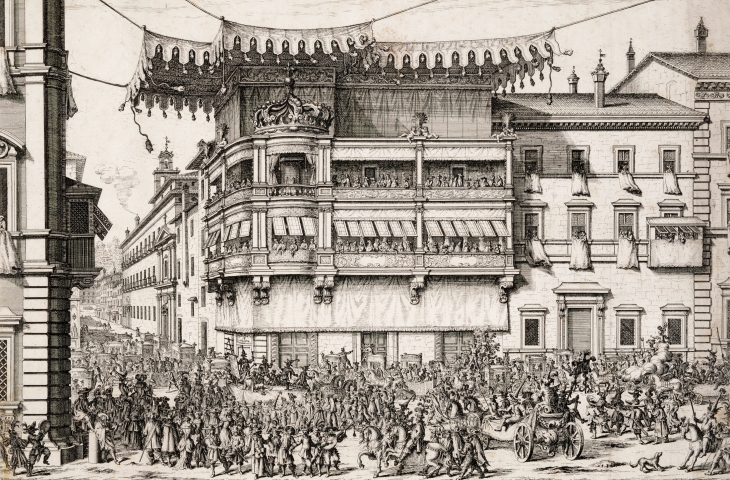 Museo di Roma a Palazzo Braschi: 1656 etching by Giovan Battista Falda showing the temporary box built for Queen Christina of Sweden in Piazza Venezia for her first Roman Carnival. Palazzo d'Aste is visible on the left side. The street to the left of the box is Via di S. Romualdo which was enlarged in the 1870s

Some quarter of an hour of this sort of progress, brought us to the Corso; and anything so happy, so bright, and lively as the whole scene there, it would be difficult to imagine. From all the innumerable balconies: from the remotest and highest, no less than from the lowest and nearest: hangings of bright red, bright green, bright blue, white and gold, were fluttering in the brilliant sunlight. From windows, and from parapets, and tops of houses, streamers of the richest colours and draperies of the gaudiest and most sparkling hues, were floating out upon the street. The buildings seemed to have been literally turned inside out, and to have all their gaiety towards the highway. Shop-fronts were taken down, and the windows filled with company, like boxes at a shining theatre; doors were carried off their hinges, and long tapestried groves, hung with garlands of flowers and evergreens, displayed within; builder's scaffoldings were gorgeous temples, radiant in silver, gold, and crimson; and in every nook and corner, from pavement to the chimney-tops, where women's eyes could glisten, there they danced, and laughed and sparkled, like the light in water .. (read more).
Charles Dickens - Pictures from Italy - 1846 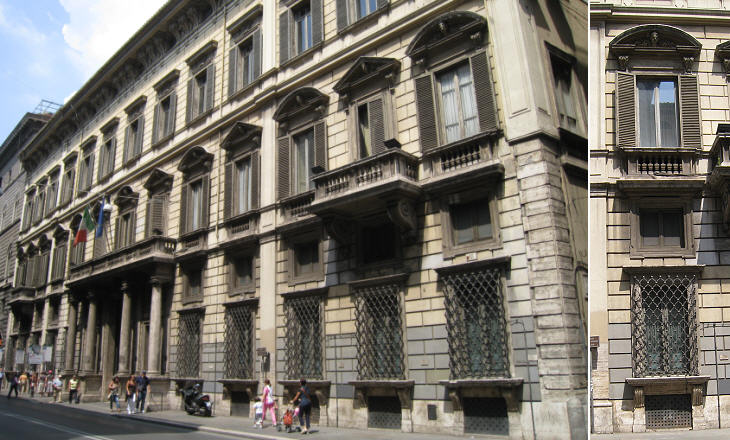 The Mancini were a minor noble family until Michele Lorenzo Mancini married Girolama Mazzarino, sister of Cardinal Jules Mazarin, Prime Minister of King Louis XIV of France. Several members of the family went to live in France and Filippo Giuliano Mancini was made Duke of Nevers; he enlarged the family house in Via del Corso in 1687-689; the new palace was designed by Carlo Rainaldi. The Mancini however preferred to live at Palazzo Rospigliosi which they had inherited from Cardinal Mazarin. 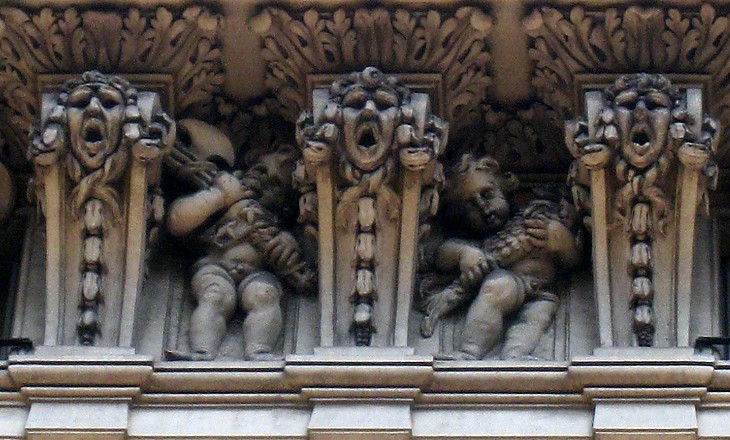 Here is the French Academy (at the time at Palazzo Capranica del Grillo); (..) There is One Circumstance that makes this place as well worth' visiting as almost Any in Rome: Here are Casts of all the principal Statues; Many of which are Thus seen much better than by the Statues Themselves; I mean Those that are in Disadvantagious Lights, or Positions. Besides Here one has the Conveniency of Steps, so that one may come Near any part, how remote soever from the Eye as one stands on the Ground; and Here moreover All these fine Things are brought together, and Seen at Once, and so may be Compared one with another, as I did with a great deal of Pleasure.
Jonathan and Jonathan Richardson - Account of Some of the Statues, etc. in Italy - 1722
In 1725 the palace was leased to Accademia di Francia, an institution founded in 1666 by King Louis XIV for the education of French artists in Rome; the palace was eventually bought in 1737 and adapted to its new function; its southern corner, which received more light, became the large hall where students practised copying plaster casts of ancient statues, including the reliefs of Colonna Traiana.
In 1793 the Academy was closed after riots which followed the killing of Hugon de Bassville, a representative of the French Republic; the Academy was reopened at Villa Medici a few years later.
In 1818 the palace was bought by Louis Bonaparte, brother of Napoleon and former King of Holland; in 1853 it was sold to the Salviati and in 1919 it was bought by a bank. 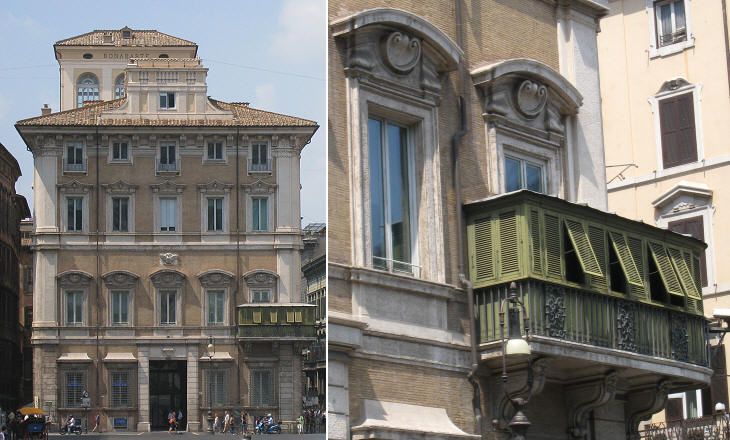 (left) Façade; (right) covered balcony from which Letizia Ramolino Bonaparte watched the passers-by; these balconies, of Ottoman origin, have disappeared in Rome, but they are still popular in Malta

Palazzo d'Aste was designed by Giovanni Antonio de' Rossi and it was built in 1657-677. Giovanni Battista d'Aste was a wealthy banker from Albenga near Genoa who settled in Rome at the beginning of the XVIIth century and who left a fortune to his heirs. In 1818 the building was bought by Letizia Ramolino Bonaparte, mother of Napoleon, who lived in the apartment on the first floor until her death in 1836. The palace was inherited by Lucien Bonaparte, Prince of Canino. In 1823 she was joined by Jérôme Bonaparte, her youngest son, who resided at Porto S. Giorgio in 1829-1831. You may wish to visit Museo Napoleonico to learn more about the Roman branch of the Bonaparte.
A recent restoration brought back the original colours of the building (you may wish to see it before the restoration). In 1785 at the age of 35 Letizia Ramolino Bonaparte was left a widow with eight children to provide for. She knew periods of almost poverty. During the heyday of her son Napoleon she preferred not to live in Paris and to have very limited contacts with the court (and her daughters-in-law). A very pious and down-to-earth woman she did not resent leaving Paris and settling in Rome (it is said that she never learnt to properly speak French).

Detail of the loggia showing the name of the Bonaparte (actually it was Buonaparte, but Napoleon changed it to make its pronunciation easier in French), which you can see in the image used as background for this page