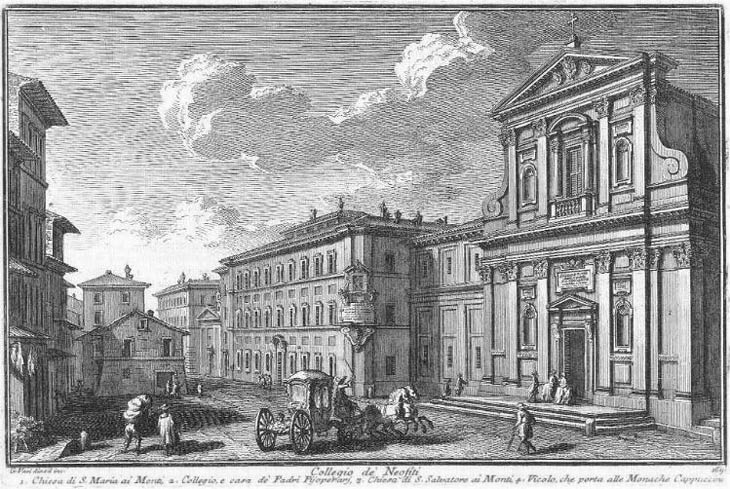 This 1759 etching by Giuseppe Vasi shows Argiletum, a street of ancient Rome which was not modified during the Middle Ages and was not affected by the XVIth century redesign of the city's urban layout. Argiletum is mentioned by Virgil who says that one Argus was put to death (letum) for treachery there:

.. Here too
the grove of Argiletum, sacred name,
where good Evander told the crime and death
of Argus, his false guest.
Book 8 - Translation by John Dryden

but the name of the street was most likely a reference to argilla (clay).
We know from Martial and Seneca that many booksellers had their shops in Argiletum, but most likely in its initial section near Foro di Cesare. In the XVIIIth century the street was flanked by churches and religious institutions.
The view is taken from the green dot in the 1748 map below. In the description below the plate Vasi made reference to: 1) S. Maria ai Monti; 2) Collegio de' Neofiti; 3) S. Salvatore ai Monti; 4) short alley leading to Monastero delle Cappuccine. The small map shows also 5) Oratorio di S. Giovanni Battista. 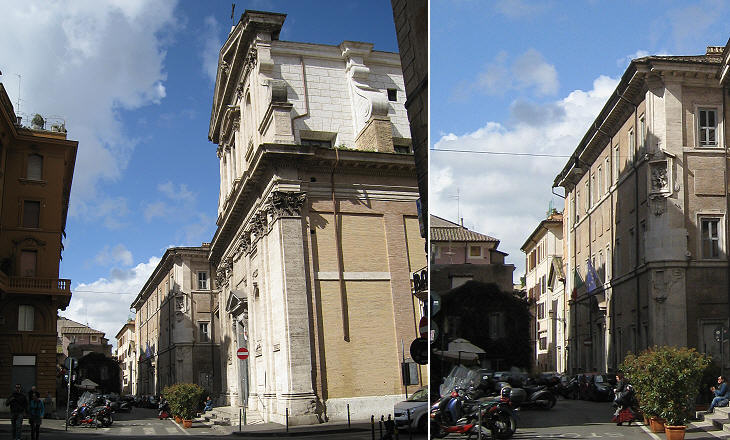 In the 1880s town planners identified the need for a large street linking the area of the ancient forums with Stazione Termini, the central railway station; they came to the conclusion that it was not possible to enlarge Via della Madonna dei Monti, the ancient Argiletum, and they opened Via Cavour, a brand new street, which runs parallel to it; the Capuchin nunnery mentioned by Vasi was pulled down together with S. Maria della Concezione, its small church.
The Capuchin nuns were called Farnesiane because their convent was founded by Francesca Farnese in 1641, but also the Sepolte Vive, the buried alive, because they were not allowed to ever see even their parents; in addition to Lent, they fasted from All Souls' Day to Christmas; according to some foreign writers in search of local colour they had a skull in their refectory hall and they slept in their coffins, but these details are denied by Rev. Jeremiah Donovan in his 1844 Guide to Rome.
Apart from the modern building opposite S. Maria dei Monti there have been no other changes, even the small house in the middle of the street is still there. 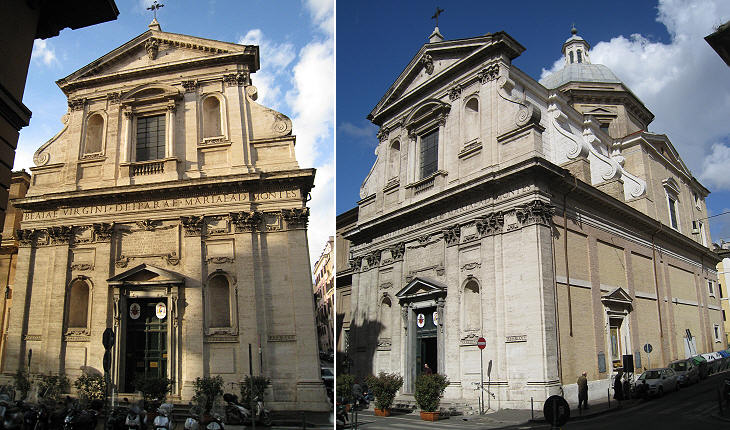 (left) Façade; (right) side on Via dei Serpenti leading to Piazza alli Monti

In the XIIIth century the site of the church was occupied by a nunnery of the Poor Clares; probably because the area was unhealthy the nuns moved to S. Lorenzo in Panisperna which was situated on higher ground. The building was sold and one of its halls was turned into a hayloft; on April 26, 1580, a blind woman miraculously recovered her sight after having prayed in the hayloft in front of an old fresco portraying the Virgin Mary. Pope Gregory XIII suggested relocating the fresco to SS. Quirico e Giuditta, but the inhabitants of the neighbourhood opposed the move and eventually the Pope decided to build a new church (on the same site) to house the sacred image.
S. Maria ai Monti was designed by Giacomo della Porta; you may wish to see the church as it appeared in a 1588 Guide to Rome, immediately after its completion. 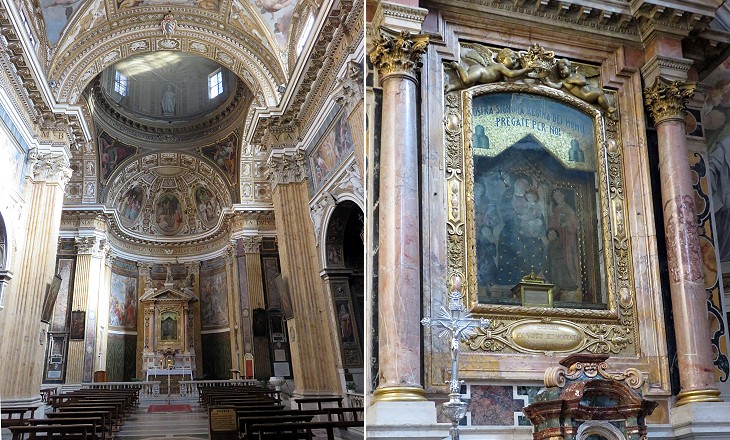 (left) Interior; (right) main altar with the fresco portraying "Madonna dei Monti": the inscription says "Our Lady, Queen of Monti, pray for us" and is decorated with the symbol of Rione Monti

The church became so dear to the Romans that it is usually called Madonna dei Monti, rather than S. Maria ai Monti, Madonna being a more colloquial term to indicate the Virgin Mary. Unlike other small churches of the neighbourhood, S. Maria ai Monti has a lavish decoration and many interesting paintings (two of which you can see in a page covering the iconography of the saints). 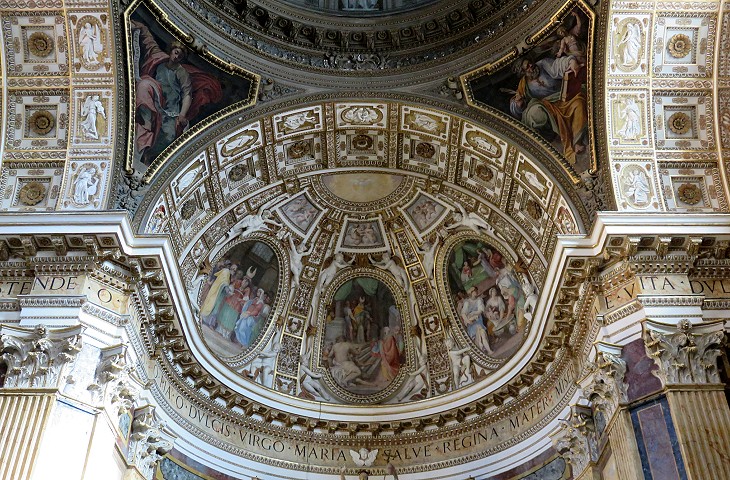 Interior: vault of the apse by Cristoforo Casolani

Cristoforo Casolani (ca 1582-1622) belonged to a family of painters from Siena, but he mainly worked in Rome as assistant to other better known artists. The decoration of S. Maria dei Monti and to a lesser extent that of S. Silvestro in Capite were the only opportunities he was given to show his skill. The stucco frames of the vault of the apse and of the ceiling were designed by della Porta and other architects and Casolani was asked to fill them with frescoes. 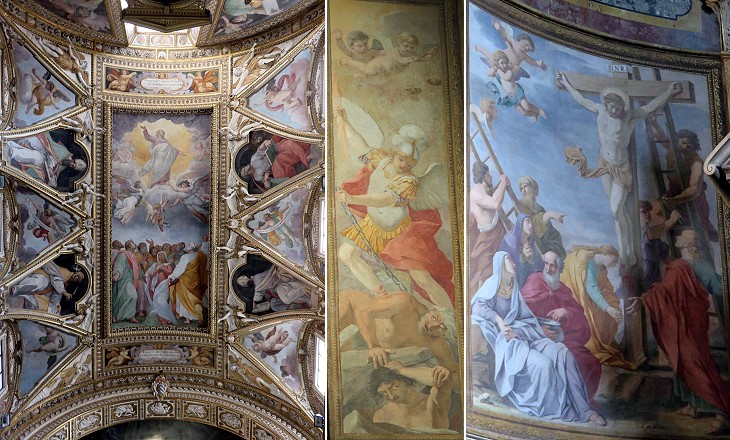 (left) Ceiling by Cristoforo Casolani; (centre/right) Archangel Michael and Crucifixion by Giacinto Gemignani who in 1666 completed the decoration of the apse (see a fresco by Geminiani at Battistero Lateranense)

The ceiling partition into triangular sections reflects the pattern introduced by Michelangelo in the Sistine Chapel; it is one of the first barrel vaulted ceilings of Rome and Cingolani, especially in the depiction of flying angels, introduced some elements of that illusionistic painting which eventually characterized most XVIIth century ceilings (more on this topic in a separate page). 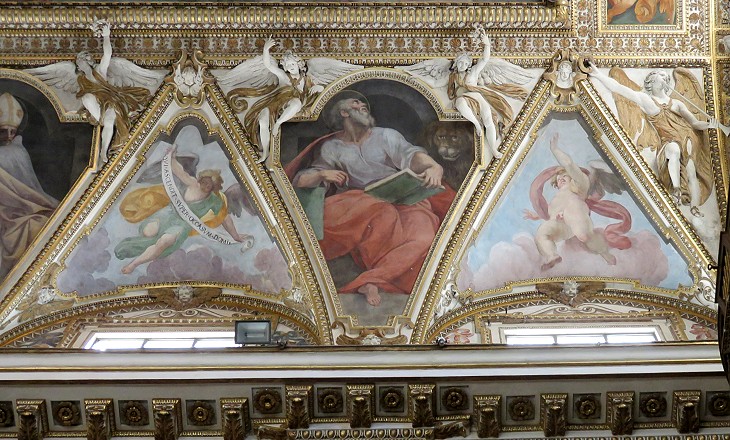 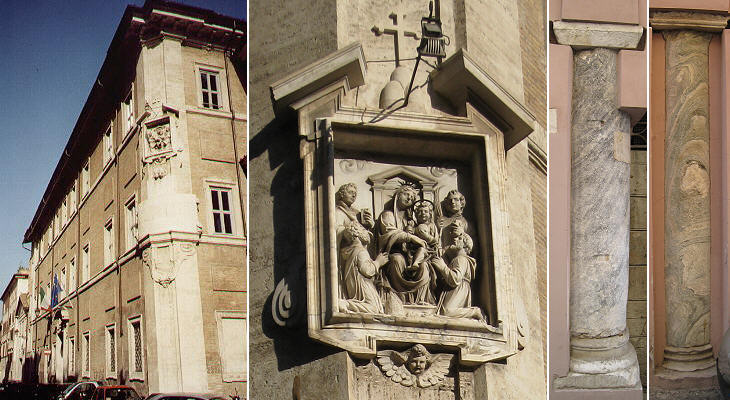 The Pope entertains a learned Preacher, to convince the Jews out of their own Scriptures and those that are converted, are provided for in the Hospital of the Catechumens, till they be throughly instructed. I have seen divers of them baptized.
Richard Lassels' The Voyage of Italy, or a Compleat Journey through Italy in ca 1668
In 1543 Pope Paul III founded an institution aimed at assisting catechumens (would-be converts preparing for baptism) and neophytes (new converts wishing to become priests); these were mainly Jews, but also Muslims who had been captured in the course of fights with the Ottomans and the corsairs of northern Africa; the institution, which was in part financed by a specific tax levied on the Jews of Rome, was housed for some time in the building known as Casa di S. Caterina.
In 1634 Pope Urban VIII assigned the small church of S. Salvatore ai Monti to the institution; his brother Cardinal Antonio Barberini the Elder bought the properties between this church and S. Maria ai Monti and built Collegio de' Neofiti there: it was designed by Gaspare de' Vecchi. The main portal (which you can see in the image used as background for this page) was decorated with the Barberini bees, but they were erased during the French administration of Rome. 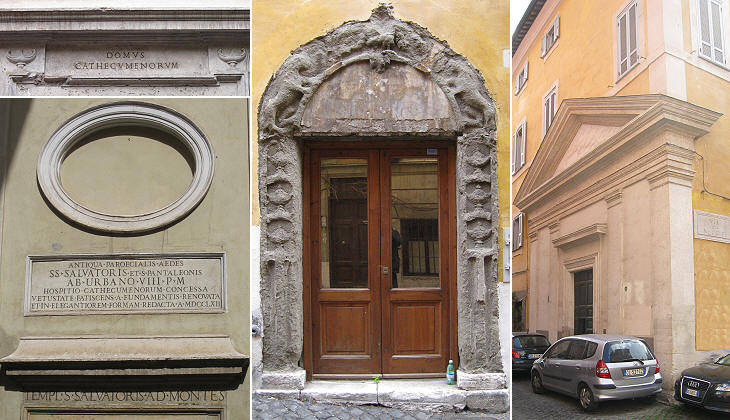 (left-above) Inscription on a side entrance to Collegio dei Neofiti; (left-below) inscription on the façade of S. Salvatore ai Monti; (centre) another entrance in Via dei Neofiti with the heraldic symbols of Pope Innocent XI; (right) Oratorio di S. Giovanni Battista

Pope Innocent XI enlarged the building with a wing for women and he built a small oratory for them; his heraldic symbols (eagle, lion and incense burner) can be seen on two doors.
The conversion of Jewish children was often a cause of controversy, especially when they were abducted from their families on the grounds that they had received emergency baptism; the practice was supported by Canon Law and it was enforced until the very end of the Papal State, the last recorded case having occurred in 1864.
Today the building houses a department of the Third University of Rome.