Seminario di S. Pietro in Vaticano
(Vasi at work in the Grand View of Rome) In 1759, when Giuseppe Vasi published this etching, the small seminary behind Basilica di S. Pietro was a recent addition to the many Roman institutions in charge of the education of future priests; the building was completed in 1729 during the pontificate of Pope Benedict XIII, at the initiative of Cardinal Annibale Albani, nephew of Pope Clement XI, who was a very influential member of the papal court and who, as Arciprete di S. Pietro, presided over all activities performed in the basilica. The location of the seminary responded to a practical need; to have within easy reach the boys who served Mass or were members of choirs singing at Solemn Mass or other ceremonies. At Vasi's time (and until 1932) Casino del Belvedere which housed the papal collections of antiquities could only be accessed through the street shown in the plate.
The view is taken from the green dot in the 1748 map below. In the description below the plate Vasi made reference to: 1) Palazzino del Cardinale Arciprete di S. Pietro; 2) S. Marta; 3) S. Stefano degli Abissini; 4) Forno (Bakery). The map shows also: 5) Seminario di S. Pietro; 6) Zecca (Mint); 7) Fontana dell'Aquilone; 8) the site where the Sacristy of S. Pietro was built in 1776-784; 9) S. Maria in Camposanto. 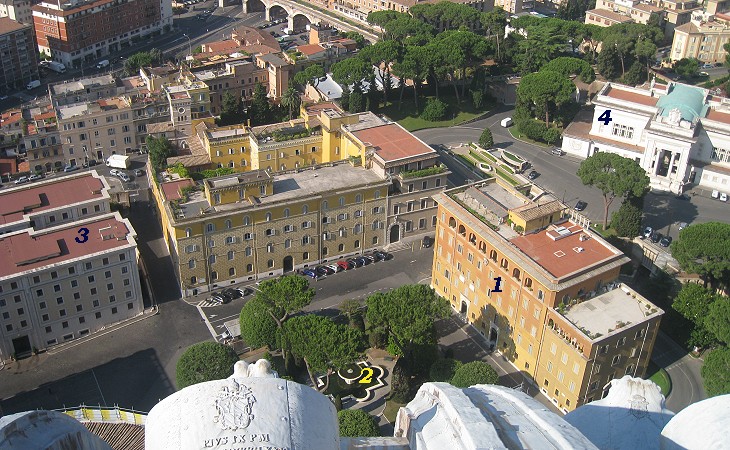 The dome of S. Pietro provides a good point of view for identifying the changes which occurred during the 1930s: a) Seminario di S. Pietro was incorporated into a taller building (1) which still retains the two entrances to the original construction, but no longer houses the seminary; b) Palazzino del Cardinale Arciprete was pulled down and replaced by a small garden with a fountain (2); c) the buildings between the seminary and S. Stefano degi Abissini were demolished, including S. Marta and the adjoining convent; the square is still called Piazza di S. Marta and Collegio di S. Marta is the name of a modern building (3) which houses the cardinals during conclaves; d) the white building (4) is a railway station which was designed by Giuseppe Momo.
These radical changes were made in conjunction or immediately after the 1929 treaty (Patti Lateranensi) between the Holy See and the Kingdom of Italy which settled the issues arising from the 1870 annexation of Rome. Pope Pius XI, the reigning pope, decided to provide the Vatican City State with a series of modern facilities to underline its self-sufficiency.

The changes introduced by Pope Pius XI were preceded by a major reshaping of the area which was promoted by Pope Pius VI in 1776 in order to make room for a new grand sacristy.
Rotonda di S. Andrea, an ancient Roman building which was used as the sacristy was pulled down; S. Stefano degli Unni or degli Ungheresi, a small church said to have been founded by St. Stephen I, the founder of the Kingdom of Hungary, was demolished and S. Maria in Camposanto was relocated to a different position to enlarge the street leading to the new sacristy. Swiss guards controlling the access to the Vatican City State; behind them S. Maria in Camposanto and Sacrestia di S. Pietro; (right) the remaining section of the Camposanto

The most famous Camposanto is that of Pisa; the cemetery bears this name (Holy Yard) because it is said that it was built with soil from Golgotha (Mount Calvary); the same tradition applies to the small cemetery attached to this church; the soil from Golgotha was brought by St. Helena, mother of Emperor Constantine. According to tradition Pope Pius V placed dust from this site into a handkerchief offered by his companion, the Polish ambassador. When the ambassador later opened the cloth, the dust had been transformed into blood. The reference to the Abissini (Ethiopians) is due to the fact that the church was assigned by Pope Sixtus IV to Coptic monks of that country. The church is very old, but it was largely modified at the beginning of the XVIIIth century: it retains a medieval portal with a very fine frieze having at its centre the Lamb of God (similar to that of S. Pudenziana).
The plate by Vasi shows a series of other buildings near the church and along the street behind the basilica; they were all pulled down to make room for Palazzo del Governatorato, which in origin was expected to be a new seminary. It was eventually redesigned to house the offices of the new state; it is preceded by a flower-bed showing the coat of arms of the reigning pope (Benedict XVI at the time of this photo; you may wish to see it in a larger image at the time of John Paul II). 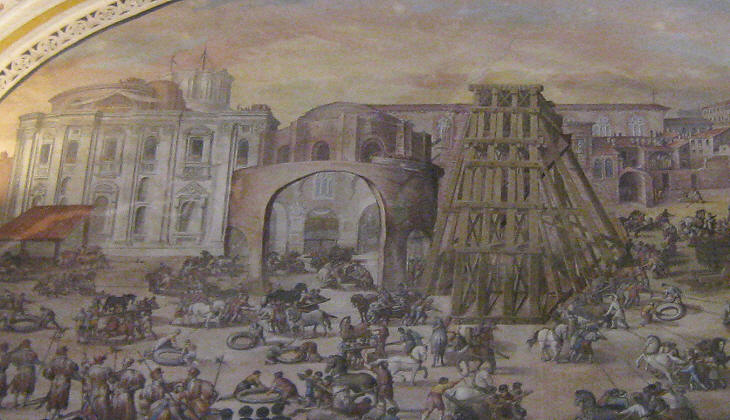 Fresco in the Vatican Library showing (left to right): a) rear part of new S. Pietro before the completion of the dome: b) Rotonda di S. Andrea; c) the relocation of an obelisk to Piazza S. Pietro in 1586; d) the remaining section of old S. Pietro

Pope Sixtus V wanted his most spectacular achievements to be celebrated by frescoes in the Vatican Palace; one of them shows the construction of new S. Pietro at a very critical moment, when the dome was yet to be completed; the basilica was built on the site of a private circus belonging to Emperor Caligula and two ancient monuments still stood near its southern side: an Egyptian obelisk and Rotonda di S. Andrea, a huge circular building of the time of Emperor Caracalla. The Pope felt it was very inappropriate to have these symbols of the past next to the largest Christian temple; the obelisk was relocated and it became a monument to the Holy Cross, while Rotonda di S. Andrea was turned into the sacristy of the new basilica (this second action was initiated by Pope Gregory XIII, his predecessor). Sacrestia di S. Pietro and one of the two passages linking it to the basilica; (right) the dome

The space available in Rotonda di S. Andrea did not entirely meet the requirements of a sacristy and several popes thought about how to solve the problem, but they were reluctant to endorse a project which entailed the pulling down of the ancient building: in 1715 Pope Clement XI called a contest and many architects sent projects; nothing emerged in practical terms, but all the projects highlighted the need to demolish Rotonda di S. Andrea. 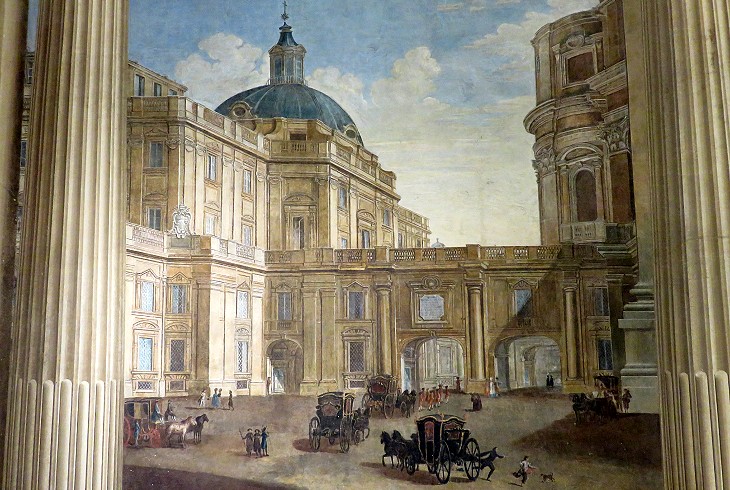 Pope Pius VI, who before being elected, had been for years Arciprete di S. Pietro and who therefore had a direct experience in the matter, laid the first stone of a new sacristy in 1776; the new building was detached from the basilica and linked to it by two covered passages. 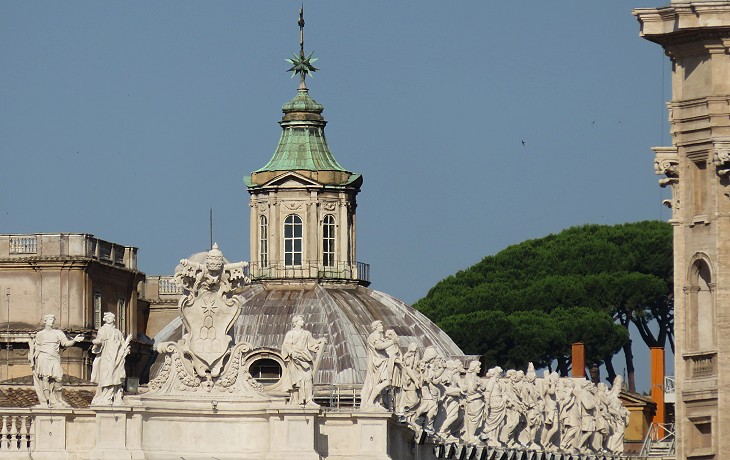 Dome seen from Piazza S. Pietro (its tip is shown also in the image used as background for this page)

The project for the sacristy was designed by Carlo Marchionni, who was the architect of Fabbrica di S. Pietro, the institution in charge of the construction and maintenance of the basilica. Marchionni is remembered also for having designed Casino di Villa Albani. You may wish to learn more about the initiatives of Pope Pius VI in a page dedicated to his heraldic symbols. 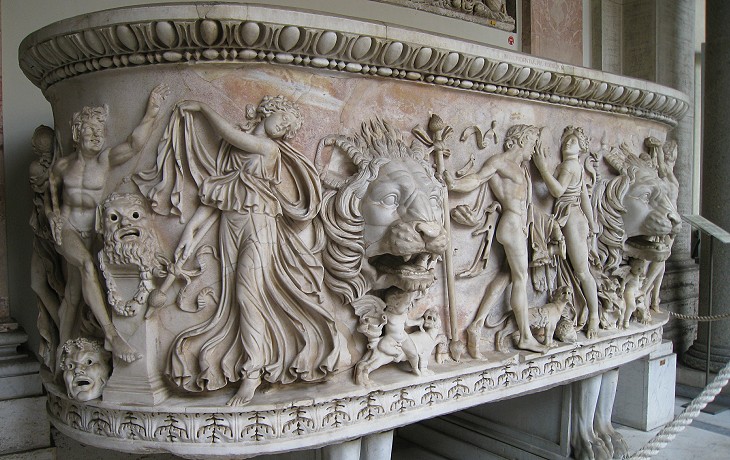 Musei Vaticani - Cortile Ottagono: sarcophagus found during the construction of the sacristy View of the section of the Vatican Gardens shown by Giuseppe Vasi in the plate; Forno (Bakery) was located near the traffic circle surrounding a statue of St. Peter

The plate by Vasi shows some buildings in the distance and beyond them a circular tower surrounded by a wood; one of these buildings housed the papal bakery; according to Vasi its bread was excellent, maybe because the water which was used came from the initial distribution net of Acqua Paola, the aqueduct which supplied the Vatican. In the late XIXth century the bakery demolished to facilitate access to the upper part of the hill, where Pope Leo XIII spent his summers as he preferred not to go to Castelgandolfo, fearing this act could be seen as a recognition of the 1870 Italian occupation of the Papal State. The statue of St. Peter was due to be placed in front of S. Pietro in Montorio to celebrate the Vatican Council called by Pope Pius IX in 1870, but it eventually ended in Cortile della Pigna from which it was moved to its current location. 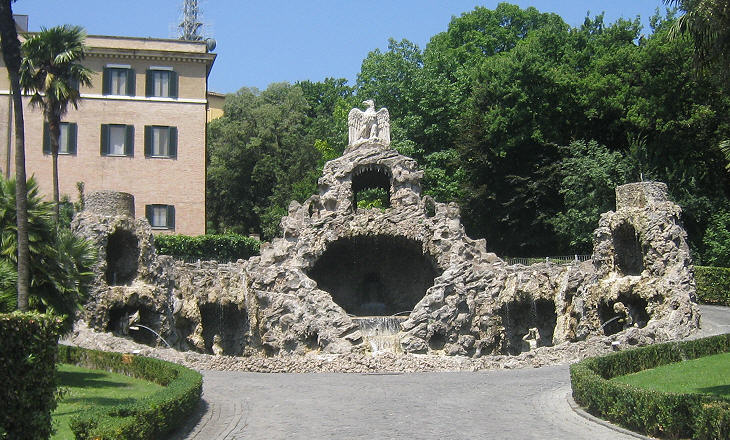 Pope Paul V celebrated the completion of the aqueduct named after him by building an imposing fountain resembling a triumphal arch at its Trastevere end; at Borgo this was done with a fountain imitating a natural cascade coming out from rocks and caves. The fountain was built near Casino di Pio IV, a small residence designed by Pirro Ligorio in 1561 for Pope Pius IV; it is generally attributed to Giovanni Vasanzio and it is named after the large marble eagle at its top, although in modern Italian aquilone means a kite, rather than a big eagle. Pope Paul V had in mind to turn the area between Porta Pertusa and S. Pietro into an elaborate garden similar to those which were being designed at Frascati; to achieve this objective other fountains were built, including Fontana delle Torri, long walkways decorated with statues were opened and a portion of land was given the aspect of a wood.
The interest of the popes in this garden gradually subsided as they set their usual residence in Palazzo del Quirinale; Pope Alexander VII relocated the Papal Mint to a new building on the back of Fontana delle Torri (it was previously housed in Palazzo del Banco di S. Spirito); the decision to place a factory in the gardens is an indication that the popes rarely lived in the Vatican. 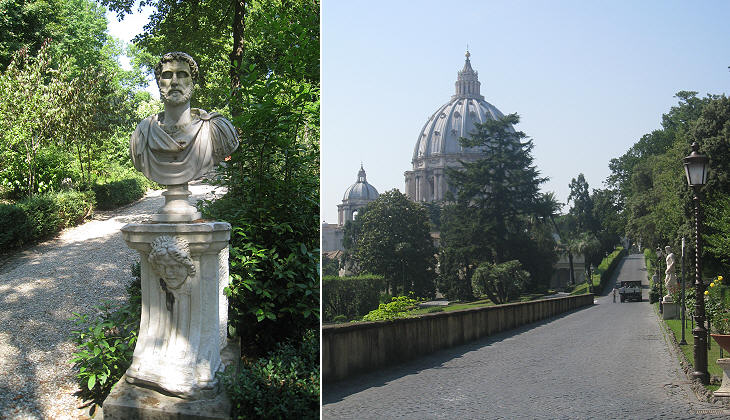 (left) Bust of Emperor Antoninus Pius; (right) road leading to the upper part of the gardens

The larger garden may be reached in a carriage (..) by driving round through the courts at the back of St. Peter's. Formerly it was always open till 2 P.M., after which hour the pope went there to walk, or to ride upon his white mule. It is a most delightful retreat for the hot days of May and June, and before that time its woods are carpeted with wild violets and anemones. No one who has not visited them can form any idea of the beauty of these ancient groves, interspersed with fountains and statues, but otherwise left to nature, and forming a fragment of sylvan scenery quite unassociated with the English idea of a garden. They are backed by the walls of the Borgo, and a fine old tower of the time of Leo IV.
Augustus J. C. Hare - Walks in Rome - 1875
The gardens attracted again the attention of the popes after 1870 when they returned to reside in Palazzo Apostolico. Many changes were introduced by Pope Leo XIII and also his successors were keen on adding new facilities, such as a landing place for helicopters. Visitors are shown a replica of the grotto where the apparitions of Our Lady of Lourdes occurred in 1858, a piece of the Berlin Wall and a large bell which was cast for the 2000 Jubilee Year. 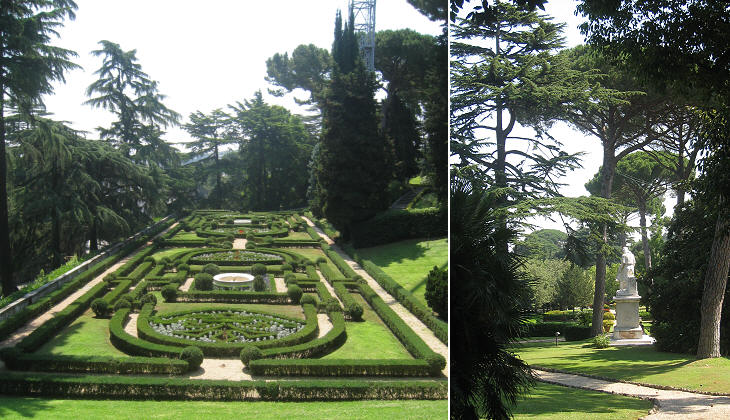 Sections of the gardens arranged in different styles

Next plate in Book 9: Collegio Clementino.
Next step in Day 8 itinerary: Porta Pertusa.