Giovanni Battista Falda (1643-678) was a printmaker who illustrated many monuments of modern Rome at the time of Pope Alexander VII; in Il nuovo teatro delle fabriche, et edificii, in prospettiva di Roma moderna he showed churches and palaces in their urban context, but in a later work (Palazzi di Roma de più celebri architetti), the buildings were shown in isolation in order to highlight their design.
In 1759 Giuseppe Vasi followed the same approach to show the western (left) and southern (right) sides of Collegio di Propaganda Fide in this etching; the building is shown in isolation without S. Andrea delle Fratte which is located opposite its southern side and without Palazzo Bernini which is located opposite its western side; in addition Vasi did not show Piazza di Spagna at the left end of the view.
The plate displays the various sections of the palace:
a) (left wing of the western side) late Renaissance building where the institution was initially housed; it was modified by Gian Lorenzo Bernini in 1642-644 ;
b) (central section of the western side) elaborate façade designed by Francesco Borromini when the palace was enlarged in 1647-662;
c) (right wing of the western side and the whole southern side) large block where the monotony of the design is interrupted by series of large windows.
It is interesting to note that the building had many shops to provide the institution with a revenue.
The view is taken from the green dot in the 1748 map below. The numbers indicate: 1) western side of Palazzo di Propaganda Fide; 2) southern side of the building; 3) Cappella dei Re Magi; 4) Palazzo Bernini. The dotted line delineates the border between Rione Campo Marzio (left) and Rione Colonna (right). 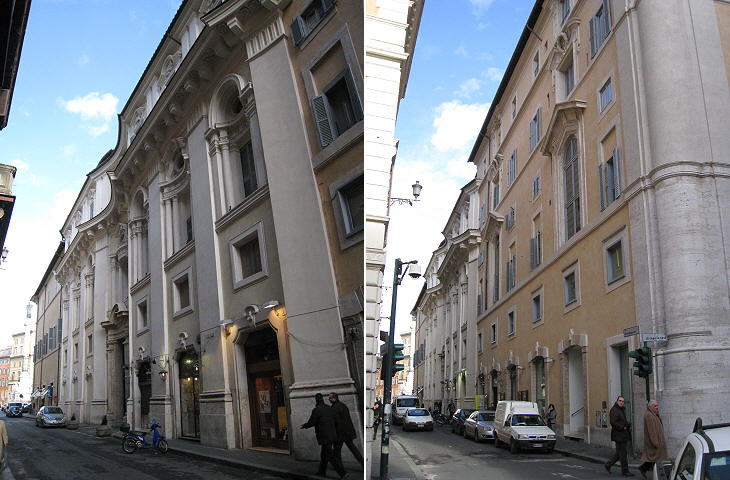 The view in January 2009: (left) section designed by Francesco Borromini; (right) the whole western side

Apart from the loss of a large coat of arms of Pope Alexander VII at the corner between the two sides of the building, no other significant changes have occurred. 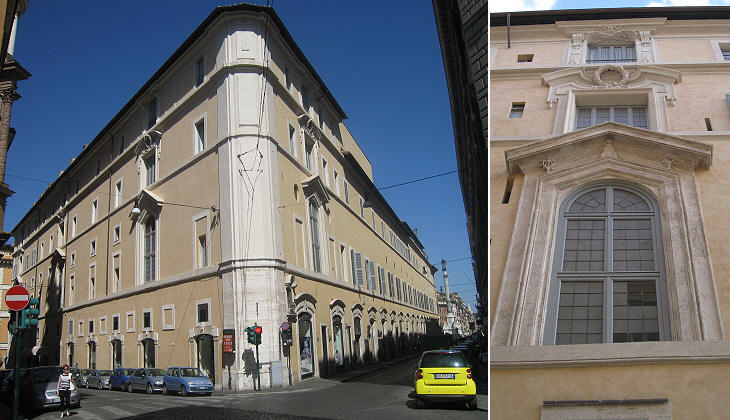 (left) Southern side along Via Capo le Case and eastern side along Via Due Macelli (at the end of the street Colonna dell'Immacolata); (right) large windows one of which is decorated with the heraldic symbols of Pope Alexander VII

The palace is also known as Collegio Urbano because it was founded by Pope Urban VIII to house a congregation (a sort of department of the Papal government) having the purpose to promote and coordinate missionary activities (hence its Latin name); Cardinal Antonio Barberini, brother of the Pope, promoted the enlargement of the building after his brother's death in 1644; the bees decorating the shops (one of which can be seen in the image used as background for this page) were one of the Barberini heraldic symbols. The palace still belongs to the congregation, although most of its activities are now housed in Nuovo Collegio Urbano De Propaganda Fide. It is an extraterritorial property of the Holy See. 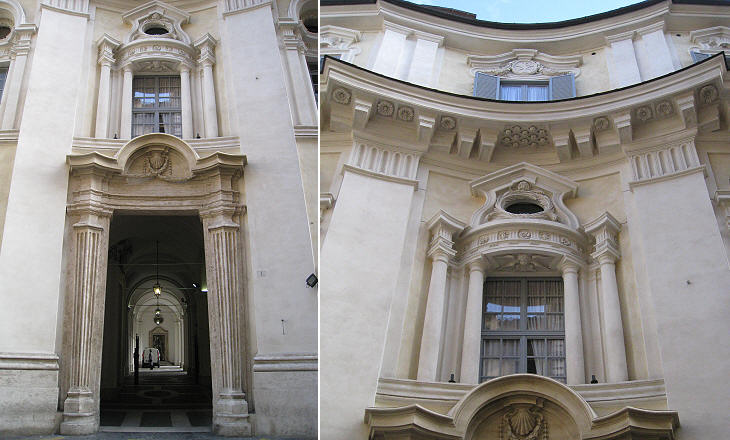 (left) Entrance; (right) detail of the window and of the cornice

Francesco Borromini completed the façade in 1662; it is the last large building designed by this architect and it is characteristic of his style which was based on the use of concave and convex lines; Borromini however did not take into account the narrowness of the street which does not allow for a proper view of the façade, or perhaps he hoped that it would have been enlarged by pulling down Palazzo Bernini.
January 6, 1787. On the feast of the Three Kings, we paid a visit to the Propaganda. There, in the presence of three cardinals and a large audience, an essay was first of all delivered, which treated of the place in which the Virgin Mary received the three Magi, - in the stable, or if not, where? Next, some Latin verses were read on similar subjects, and after this a series of about thirty scholars came forward, one by one, and read a little piece of poetry in their native tongues; Malabar, Epirotic, Turkish, Moldavian, Hellenic, Persian, Colchian, Hebrew, Arabic, Syrian, Coptic, Saracenic, Armenian, Erse, Madagassic, Icelandic, Bohemian, Greek, Isaurian, Ethiopic, etc. The poems seemed for the most part to be composed in the national syllabic measure, and to be delivered with the vernacular declamation, for most barbaric rhythms and tones occurred. Among them the Greek sounded like a star in the night. The auditory laughed most unmercifully at the strange sounds; and so this representation became a farce.
J. W. Goethe - Italian Journey - translation by Charles Nisbeth. 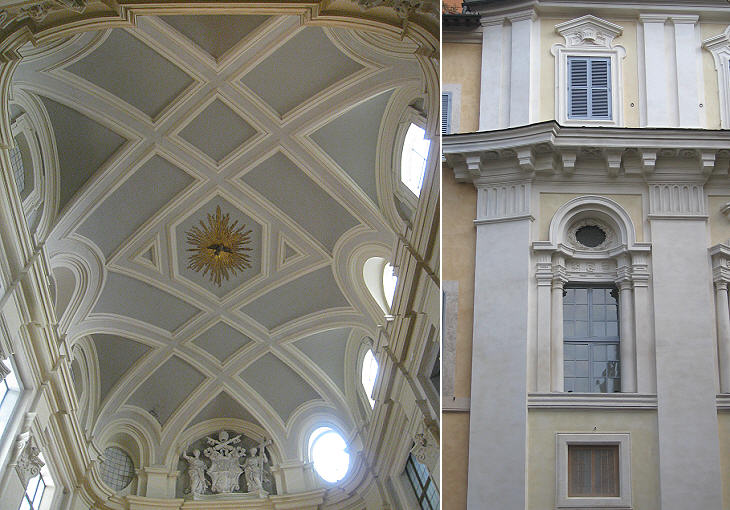 (left) Ceiling; (right) detail of a window giving light to the church

Bernini built a small chapel for Pope Urban VIII; after the Pope's death Bernini fell into disgrace and Borromini was asked to replace it with a larger chapel which was completed in 1664.
Similar to what he had done for Oratorio dei Filippini, Borromini included the chapel in the overall design of the palace, so that its existence is not evident from the outside; the chapel has an unusual rectangular shape with a fine stucco ceiling (you may wish to see that of S. Carlo alle Quattro Fontane, also by Borromini); it was decorated with coats of arms of Pope Alexander VII, one of which Filippo Juvarra included in his selection of the finest papal coats of arms. (left) Main altar; (right) bust of Cardinal Antonio Barberini by a scholar of Alessandro Algardi on a marble base designed by Borromini

The dedication to the Magi was decided by Cardinal Barberini on the assumption that the three kings could be regarded as the first pagans who embraced the Christian faith; their conversion could therefore be considered as a symbol of those promoted by the congregation.
Borromini's talent was hardly appreciated in the XIXth century.
Borromini also erected the college church, which is dedicated to the Three Magi, and presents internally and still more externally the usual characteristics of that fantastic architect, broken lines, unarchitectural curves, capricious capitals etc.
Rev. Jeremiah Donovan - Rome Ancient and Modern - 1843 (left) The two buildings belonging to Gian Lorenzo Bernini; (right) inscription and bust celebrating the great sculptor and architect (on the wrong building)

Pietro Bernini, the father of Gian Lorenzo, moved to Rome in 1606 and settled in a house opposite S. Maria Maggiore where his son continued to live for many years, although at that time S. Maria Maggiore was a rather remote location. The favour of Pope Urban VIII who commissioned him palaces, churches, funerary monuments and the decoration of the octagon of S. Pietro made Gian Lorenzo a very wealthy man and led him to move to a more central location (and also to an area which was developed by the Barberini).
In 1642 he bought two buildings in Via della Mercede: in one (the white lower building) he established his residence and his workshop, while the other one was rented. Bernini lived in this site until his death in 1680, but he wanted to be buried inside S. Maria Maggiore. The two buildings were modified in the XIXth century. Bernini left a fortune and later on his heirs moved to a palace opposite Palazzo Ruspoli in Via del Corso which is known as Palazzo Bernini too.
The 1898 inscription states that popes and kings knelt before him, but maybe these words go too far. Bernini had a very likeable personality and to use today's words he had great marketing skills; he was prepared to please the important people he worked for by letting them believe he followed their suggestions; nevertheless he was conscious of the autonomous value of art and of his own value as an artist. When Queen Christina of Sweden visited him he met her in his workshop, still dressed in his work clothes, by this indicating that his activity as an artist took precedence over etiquette rules. Bernini kept in his workshop a statue of Truth unveiled by Time (it opens in another window - the statue of Time was never made) which he sculptured for his own pleasure (it is now at Galleria Borghese).