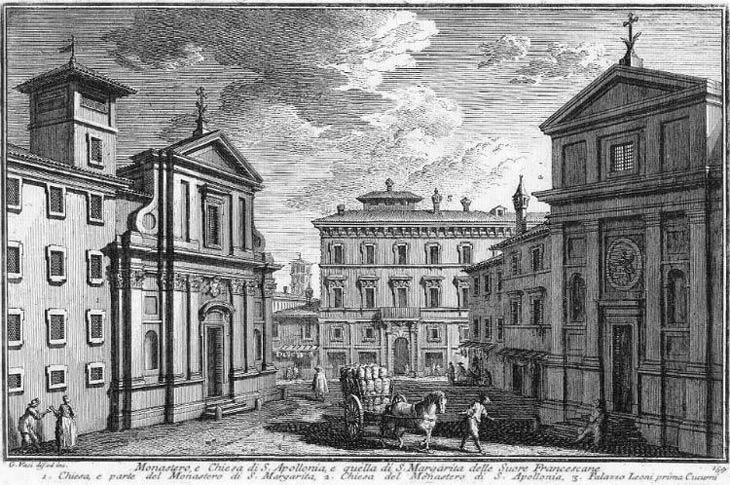 The etchings by Giuseppe Vasi often provide clues to understand practical aspects of Roman life in the XVIIIth century, e.g. the route followed by supplies unloaded at Porto di Ripa Grande to reach the city centre; in a plate Vasi showed a carriage carrying commodities moving along Stradone di S. Francesco a Ripa, in another he showed a carriage near S. Gallicano and in this 1758 plate a carriage on its way to Ponte Sisto and eventually to the main marketplaces at Piazza Navona, Piazza de' Crescenzi and Campo dei Fiori.
The view is taken from the green dot in the 1748 small map below. In the description below the plate Vasi made reference to: 1) S. Margherita; 2) S. Apollonia; 3) Palazzo Leoni. The map shows also: 4) S. Maria in Trastevere; 5) SS. Rufina e Seconda; 6) Palazzo Leopardi. 4) is shown in another page. 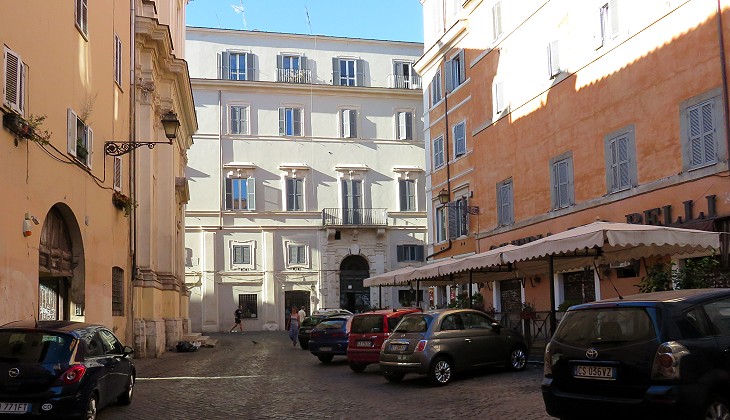 Today the street has entirely lost its commercial importance and the small square is one of the rare areas of Trastevere where residents can park their cars. The church and the nunnery of S. Apollonia do not exist any longer; the small church was built in 1582, but it was not regarded as having artistic or historical relevance and in 1888 it was replaced by an apartment block. The building which housed the nunnery of S. Margherita is still there, but it has lost the window frames shown in the plate. Palazzo Leoni has one additional storey and it is split into apartments. The square is still named Piazza di S. Apollonia. 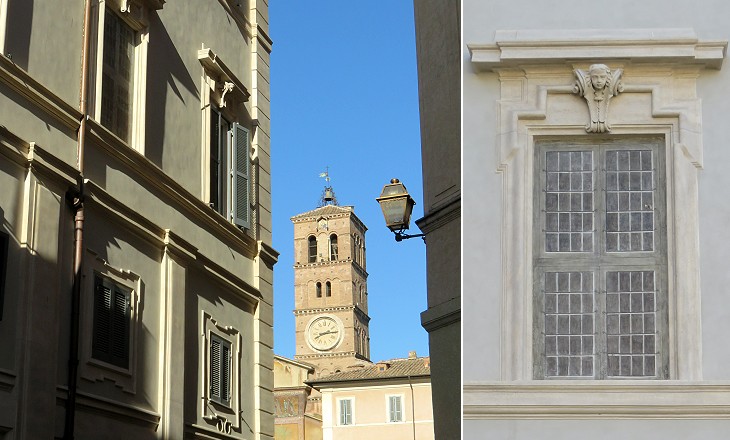 Palazzo Leoni was built in the XVIIth century and it belonged to several different families (Cucurni, Leoni, Cesarini and Pizzirani); between 1788 and 1794 it housed Conservatorio delle Pericolanti, an institution aimed at helping young women who were "about to fall in sin"; because the number of women in need of assistance became very large, the institution was relocated to a new building in Piazza delle Fornaci. 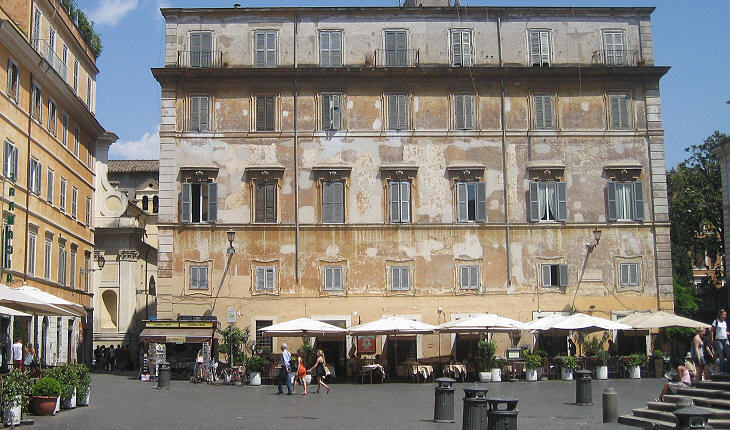 Side of Palazzo Leoni in Piazza di S. Maria in Trastevere. The photo was taken before the building was repainted in 2015. You may wish to see other Roman buildings which had ochre colours until a few years ago 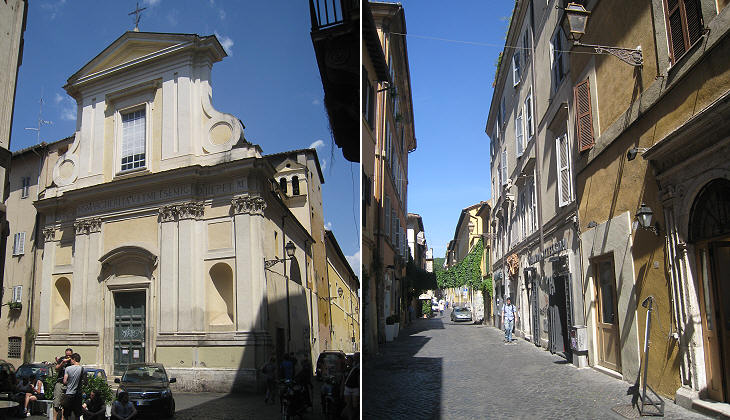 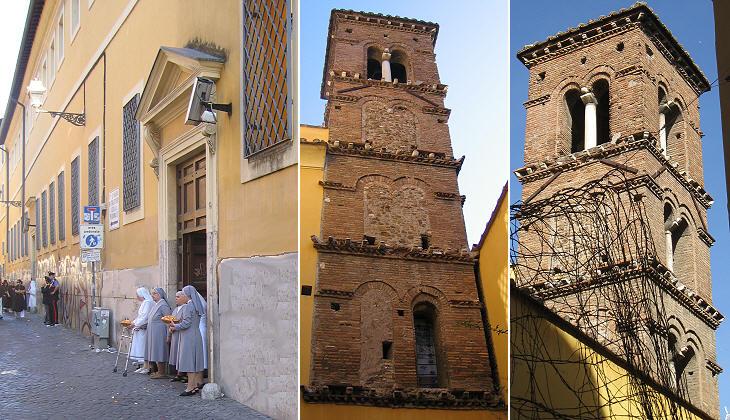 Nunneries and institutions caring for young women were very frequent in this neighbourhood. They highlight women's difficult social conditions well into the XIXth century. In 1798 they reached the record number of 54 (in the whole city).
A church on the assumed house of Rufina and Seconda, two martyrs of the IIIrd century, is recorded from the XIIth century. The small Romanesque bell tower belongs to that period, whereas the interior of the church was entirely redesigned in the XVIIth century when the building was included in a nunnery (where two daughters of Gian Lorenzo Bernini lived and died). At that time the nunnery belonged to the Order of St. Ursula which cared for the education of young girls. In 1917 the nunnery was assigned to the Sisters of the Immaculate Conception of Ivrea, an Order which was approved of in 1904. Today the building houses its headquarters. 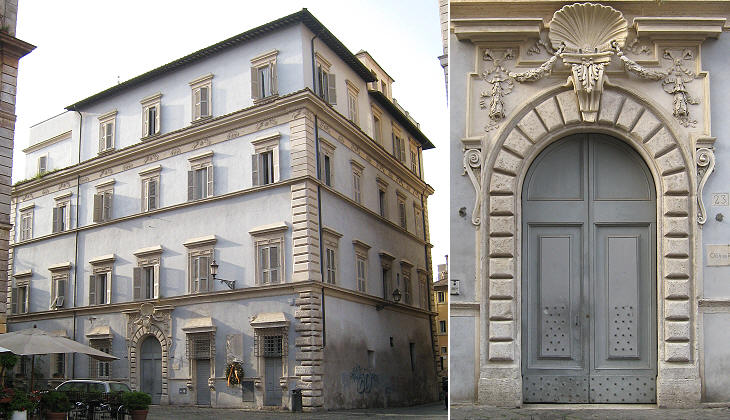 This palace is known as Palazzo Leopardi, although it belonged to this family for only three years (1803-1806); the reason lies in the fact that it was bought by Count Monaldo Leopardi, father of Giacomo Leopardi, one of the most important Italian poets of his time, whose works continue to be widely popular.
The building has a Renaissance design with some XVIIth century additions, in particular in the stucco decoration of the main portal and in the cornice (a detail of which can be seen in the image used as background for this page). In 1806 the palace was turned into yet another institution (Pia Casa del Rifugio) caring for women in danger, i.e. the inmates of Carcere Femminile del S. Michele after they had served their sentence. 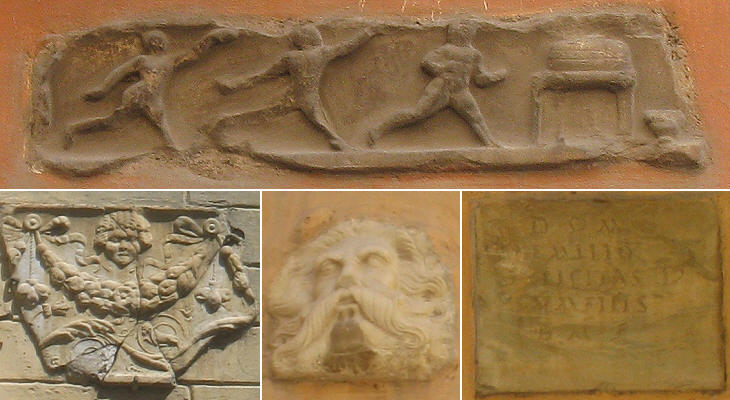 Ancient reliefs: (above) Via della Scala ; (below) Vicolo del Bologna: the last image shows a funerary inscription: D.O.M. Aemilio/Felicitas/cum filis meaning "for the Manes-gods to Aemilio from Felicitas and her children"

There are few monuments here, but no part of Rome seemed more historic, in the sense of being weighted with a ponderous past, blighted with the melancholy of things that had had their day.
Henry James - Roderick Hudson - 1875
Trastevere was one of the regiones of Ancient Rome, but it retains very few visible memories of that period, because river floods significantly raised the level of the ground; however by walking in the maze of narrow streets between Via della Lungaretta and Ponte Sisto one comes across several ancient small reliefs and funerary inscriptions. 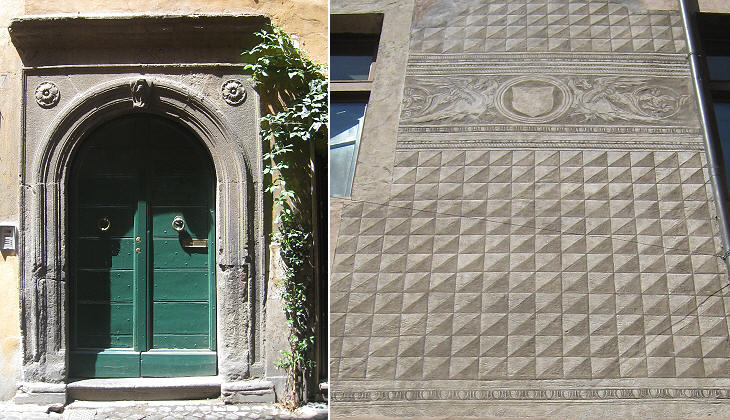 Ponte, Parione and Regola were the heart of Renaissance Rome and they have retained very fine buildings of that period; those of Trastevere were not regarded as having the same importance and during the XIXth century they were widely modified, but some elements of them can still be identified notwithstanding many additions and alterations. 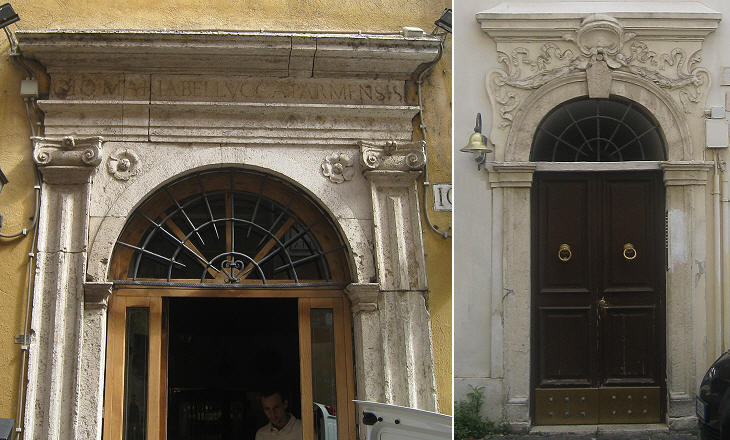 (left) Renaissance portal in Via della Lungaretta bearing the name of the landlord: Giovanni Maria Bellucca from Parma (it resembles a portal in Via dei Coronari); (right) XVIIIth century door opposite S. Gallicano

Some of the historical houses show pretensions to elegance which indicates that not all the inhabitants of Trastevere belonged to the poorest layers of society. 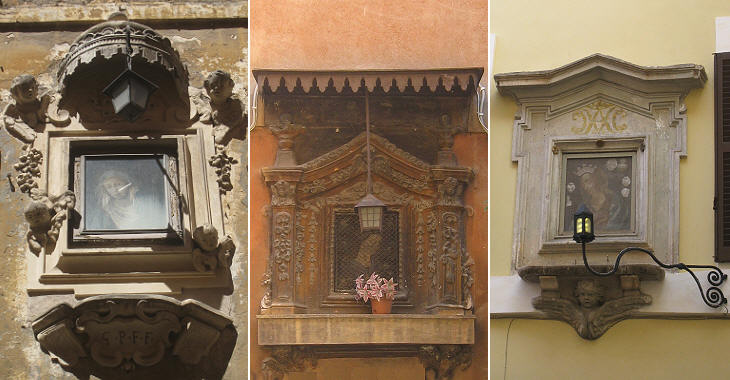 Trastevere retains the lead in the number of sacred images dedicated to the Virgin Mary.