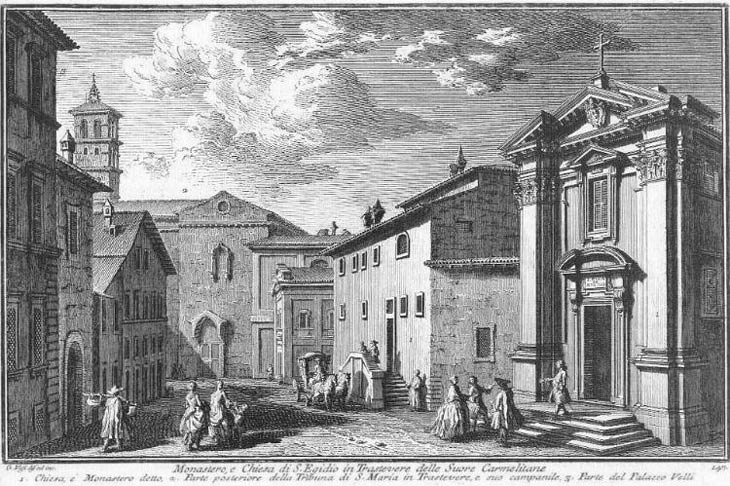 This 1758 etching by Giuseppe Vasi shows a peaceful corner of Trastevere which in 1977 was chosen to house Museo di Roma in Trastevere, a museum with a collection of paintings, prints, drawings and watercolours showing aspects of everyday life in Rome and in particular in Trastevere. It is housed in the former nunnery of S. Egidio and it is a sort of detached section of Museo di Roma a Palazzo Braschi.
The view is taken from the green dot in the 1748 small map below. In the description below the plate Vasi made reference to: 1) S. Egidio; 2) Tribuna (rear part) di S. Maria in Trastevere; the front of this church is shown in another plate by Vasi; 3) Palazzo Velli. The map shows also: 4) Oratorio del SS. Sacramento; 5) Oratorio di Maria SS. Addolorata. 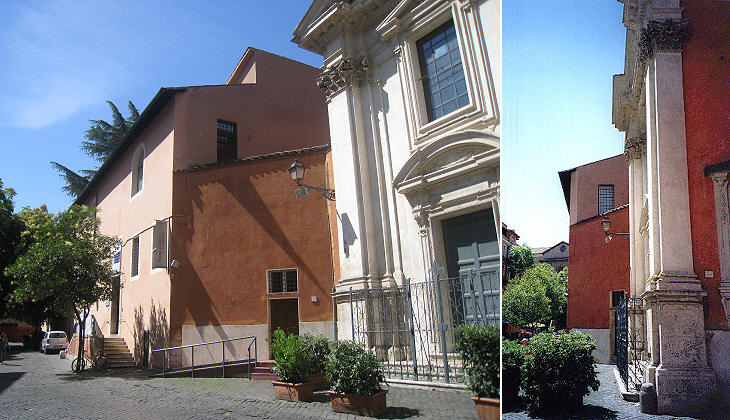 The view in June 2010 from slightly different angles

Today Trastevere is associated with Roman nightlife, but during the day and especially in the morning it can be pretty quiet; there are more trees in the streets of Rome than there were at Vasi's time, but this is the only change which has occurred at Piazza di S. Egidio. The entrance to the nunnery is now the entrance to the museum. 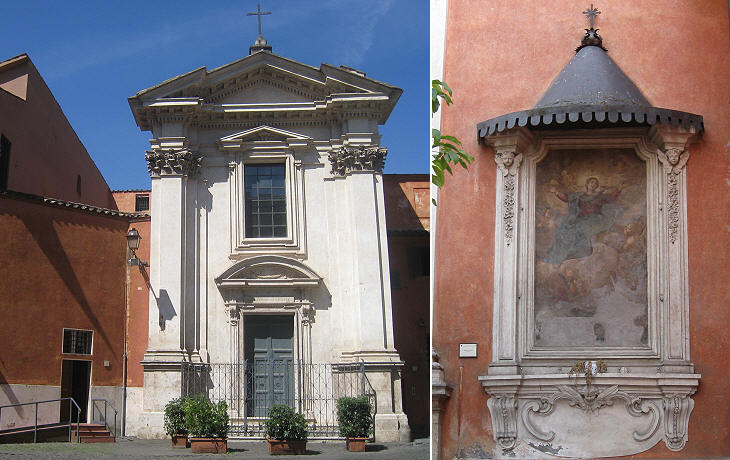 (left) Façade; (right) XVIIIth century "madonnella" (sacred image) on the side wall of the church; a detail of its stucco decoration can be seen in the image used as background for this page

S. Egidio was built in 1630 during the pontificate of Urban VIII and the etching by Vasi shows that the façade had the Pope's coat of arms; it belonged to the Discalced Carmelites and above the entrance there is an inscription saying that the church was dedicated to Our Lady of Mount Carmel; however because the nunnery was built on the site of a previous church dedicated to St. Giles (It. Egidio) it maintained also the old dedication, which eventually prevailed to avoid confusion with S. Maria del Carmelo. The church stands on the site of another previous church which belonged to the guild of the cobblers to whom Pope Urban assigned S. Bonosa, another small church of Trastevere. 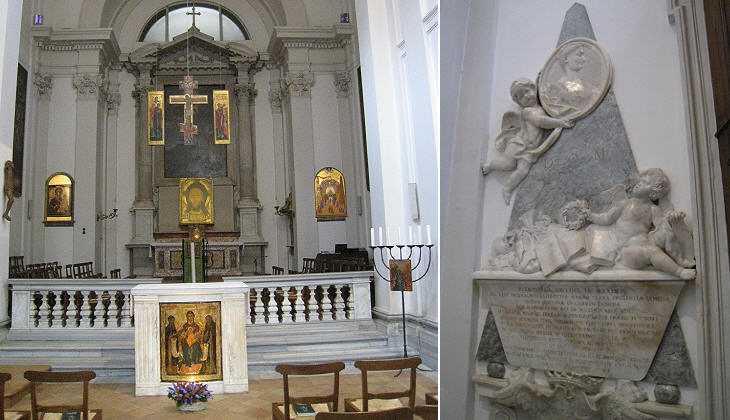 (left) Main altar with ecumenical symbols of the Community of S. Egidio; (right) monument to Petronilla Paolini Massimo di Rignano, a member of Accademia degli Arcadi; the monument, similar to many others, portrays the dead in a medallion

The church and a section of the nunnery are currently utilized by the Community of S. Egidio, a lay charitable association having working for peace among its aims; in this field this organization has achieved results where international agencies have failed.
Petronilla Paolini Massimo (1663-1726) was a forerunner of women's equality rights. She spent many years in nunneries to distance herself from the husband she had been forced to marry at the age of ten. 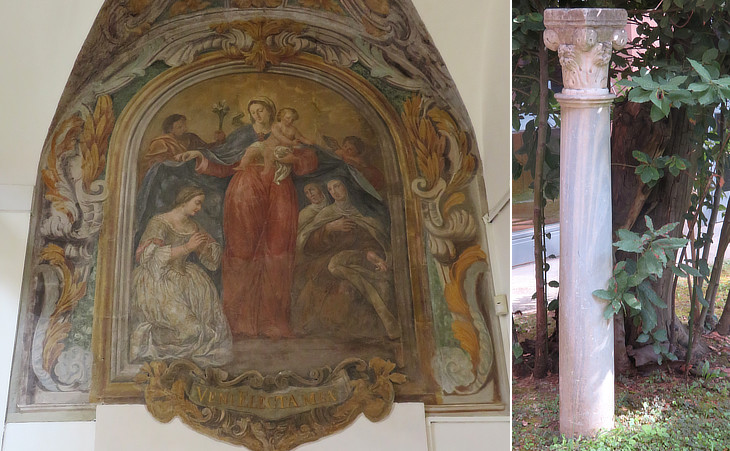 The Order of the Discalced Carmelites originated from the reform of the Order which were promoted by St. Teresa of Avila, a Carmelite nun known for her mysticism and her many visions (see how Gian Lorenzo Bernini depicted the most famous one). She was portrayed in the only remaining fresco of the section of the nunnery which was confiscated in 1873. 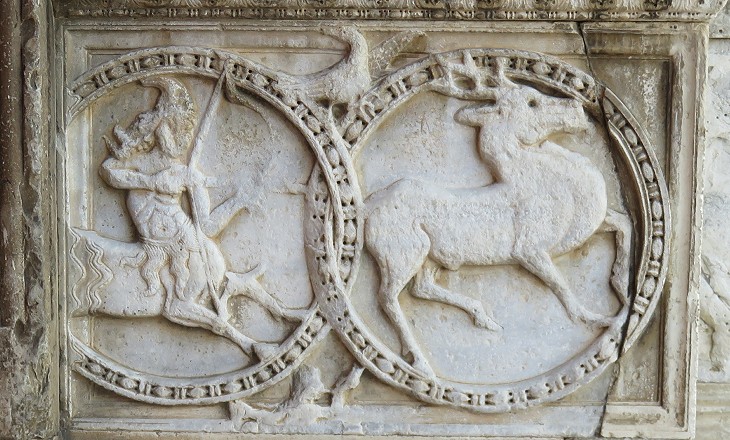 Relief at the Abbaye de Saint-Gilles du Gard in Southern France depicting an episode of the Legend of St. Giles: a hunter shoots at a deer, the sole companion of St. Giles, a hermit, but the arrow wounds the saint 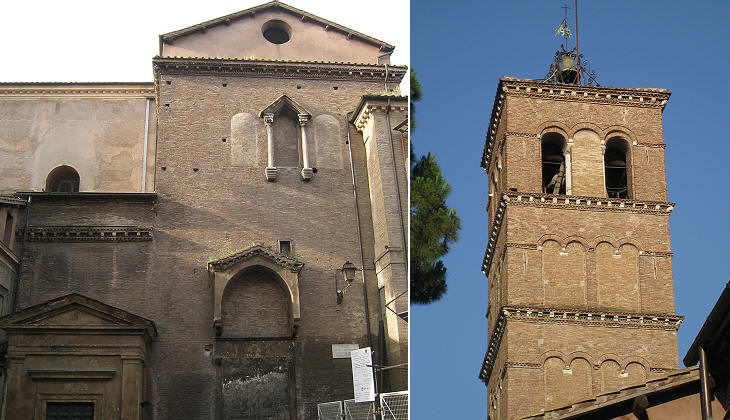 (left) External wall of the transept of S. Maria in Trastevere; (right) rear view of the bell tower

The medieval transept of S. Maria in Trastevere was modified in the late XVIth century and three windows were walled up; the side entrance was still being used at Vasi's time, but it was closed in the XIXth century.

Religious brotherhoods often specialized in providing specific services: members of Arciconfraternita del SS. Sacramento took care of bringing the Eucharist to the very sick as a form of spiritual comfort; they initially gathered at Cappella di S. Maria della Clemenza in S. Maria in Trastevere, but for the Jubilee Year 1675 they built a small oratory in a nearby alley; the façade has a very theatrical stucco decoration showing putti raising curtains. Today the building houses a restaurant.
Members of Pia Unione di Maria SS. Addolorata e delle Anime Sante del Purgatorio prayed for the souls in Purgatory; they did so at Cimitero di S. Spirito, but in 1787 they moved their meetings to a small cemetery on the right side of S. Maria in Trastevere, where in 1819 an oratory was completed, in part modifying existing buildings. 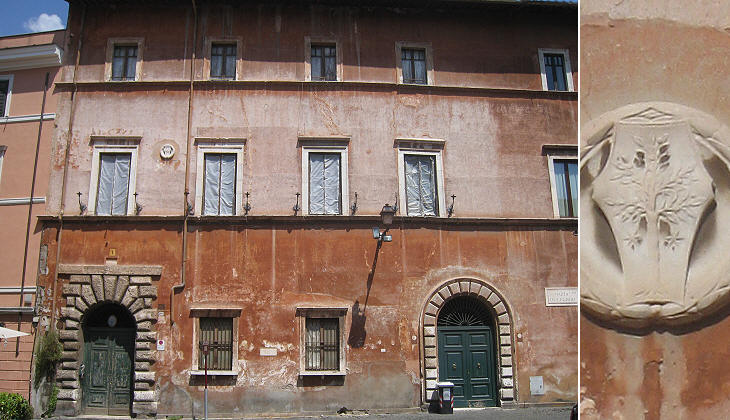 (left) Palazzo Velli; (right) coat of arms of the family

The Velli were an important family of Trastevere during the XVth century; a 1526 census recorded 188 members of the enlarged Velli family, i.e. including their servants. In the late XVth century the Velli gave a uniform appearance to a series of houses opposite S. Egidio; the left entrance has a more elaborate design, similar to that of Palazzo Lancellotti in Piazza Navona.