Links to this page can be found in Book 8, Map B2, Day 3, View C6, Rione Campo Marzio and Rione Colonna. 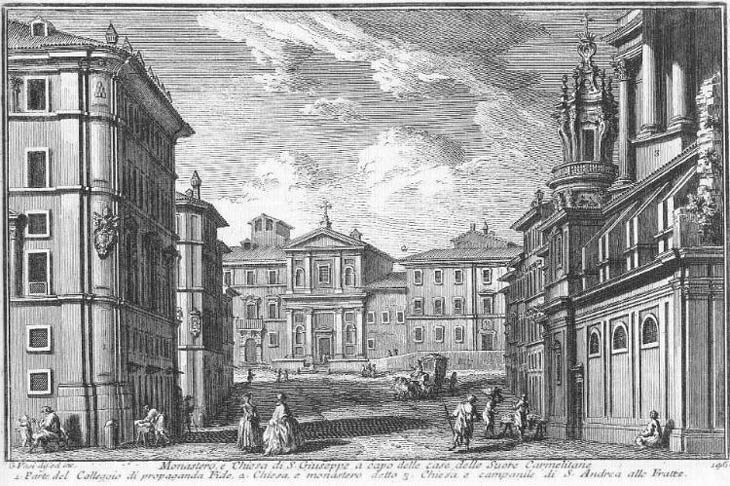 The construction of S. Andrea delle Fratte, on the site of a previous small church, started in 1604, but when Giuseppe Vasi published this etching in 1757 the upper part of the façade was yet to be completed; for this reason he preferred to show the side of the church with the very unusual dome and bell tower by Francesco Borromini. At the time of the etching the area was urbanized, but the references a capo le case (at the end of the houses) and delle fratte (of the thickets) show that it had a rather rural appearance at least until the end of the XVIth century. The shaded area in the 1748 map below indicates that the street leading to S. Giuseppe a Capo le Case was very steep.
The view is taken from the green dot in the map below. In the description below the plate Vasi made reference to: 1) Part of Collegio di Propaganda Fide; 2) S. Giuseppe a Capo le Case; 3) S. Andrea delle Fratte. 1) is shown in another page. The small map shows also 4) Palazzo Centini; 5) Palazzo della Regina di Polonia; 6) Villa delle Rose. The dotted line in the small map delineates the border between Rione Campo Marzio (above) and Rione Colonna (below). 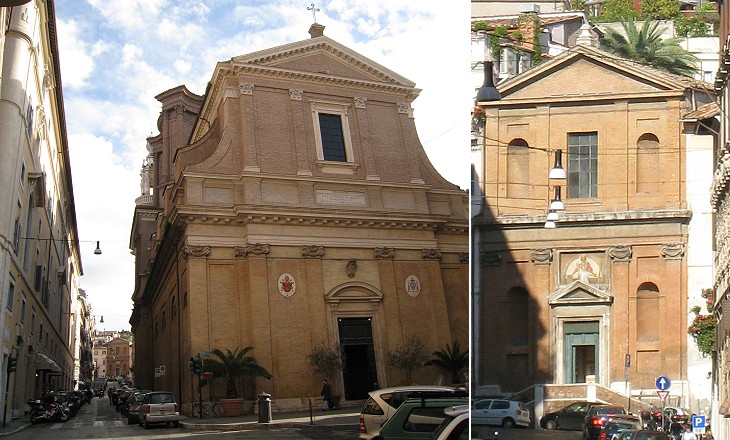 In 1826 the façade of S. Andrea delle Fratte was completed; in the late XIXth century some of the buildings on the left side of the street were modified; apart from these minor changes the urban design of the area is the same as it was in 1757, notwithstanding the fact that in the late XIXth century Villa Ludovisi, which stood behind S. Giuseppe a Capo le Case, was turned into a very busy and elegant neighbourhood. 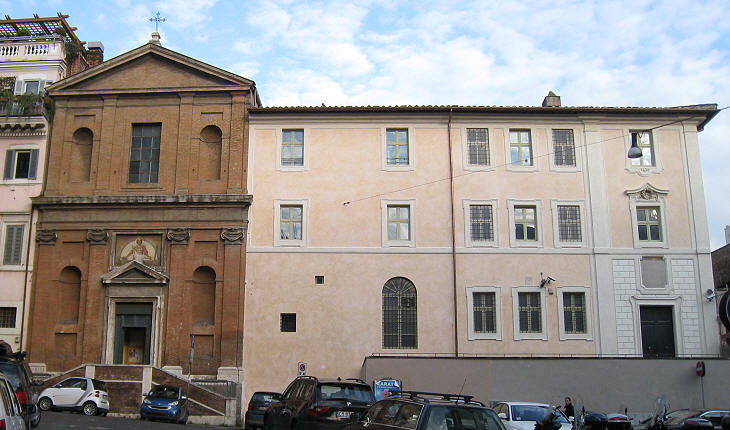 The church and the nunnery

The first nunnery founded by St. Theresa of Avila was dedicated to St. Joseph. Francisco Soto, a friend of St. Philip Neri and the translator in Italian of the works by St. Theresa, chose the same dedication for the first Roman nunnery of her order (the Discalced Carmelites). The church and the nunnery were housed in existing buildings until 1628 when the complex was renovated.
The nunnery was confiscated in the 1870s and for a while the church was deconsecrated; the works of art it contains as well as the mosaic of the façade are all modern. The mosaic replaced a fresco depicting The Flight into Egypt by Tommaso Luini which was nearly effaced in 1844 according to a guide to Rome by Rev. Jeremiah Robinson. The 1763 edition of Studio di Pittura, Scoltura et Architettura nelle Chiese di Roma by Filippo Titi reported: Vi sono pitture non tanto da considerarsi per la loro bontà quanto da ammirarsi per averle fatte suor Maria Eufrasia Benedetti monaca pittrice. "There are paintings which should be praised not because they are good, but because they were painted by suor Maria Eufrasia Benedetti, a nun." Unfortunately the paintings are lost and we cannot make up our own judgement about Titi's gender bias. 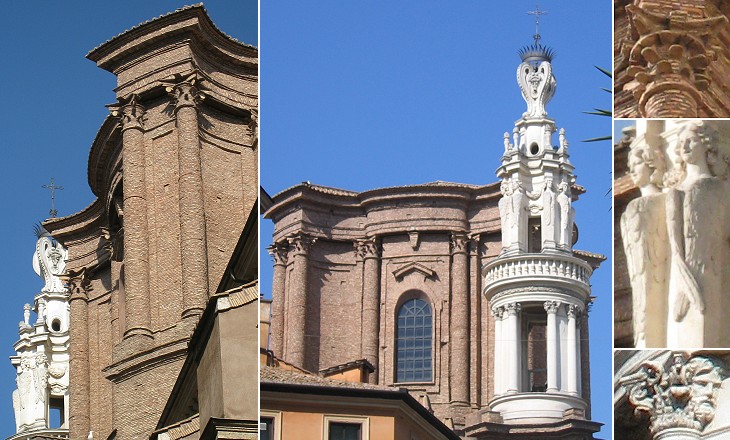 A church dedicated to St. Andrew in this area is recorded in a 1192 list of Roman churches; at a later time it became the national church of the Scottish community in Rome; when the Scots built a new church in Via delle Quattro Fontane S. Andrea delle Fratte was assigned to the Minimi, an order founded in 1474 by St. Francis of Paola.
The construction of a new church started in 1604, but it was only with the help of the Del Bufalo family that it slowly moved forward. The Del Bufalo lived in a palace near the church; in 1653 they commissioned Borromini the completion of the dome; they wanted a customary hemispherical dome; as a matter of fact the interior of the dome has a very traditional appearance, whereas from the outside its design is very unusual because it is encased in a unique brick structure. Borromini decorated it having in mind some ancient brick monuments (e.g. Sepolcro di Annia Regillia and tombs along Via Appia). The bell tower is isolated from the rest of the building and its design is completely new (you may wish to see its tip with St. Andrew's Cross from Palazzo del Quirinale). 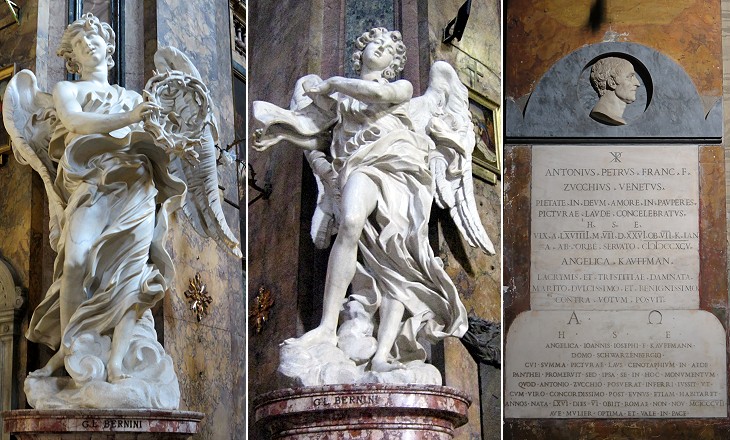 In 1641 Gian Lorenzo Bernini bought a small palace near S. Andrea delle Fratte where he lived and had his studio until his death in 1680; in 1729 his heirs donated to the church two statues that Bernini sculptured for Ponte S. Angelo, but which at the request of Pope Clement IX he retained in his workshop at the disposal of Cardinal Giacomo Rospigliosi, nephew of the Pope; probably the Rospigliosi had in mind to use the statues for the decoration of one of their palaces (e.g. that at Zagarolo) but they never actually asked for them.
Antonio Zucchi and his wife were both painters. J. W. Goethe met them during his 1786-788 Roman stay. He liked Angelica as much as he detested her husband. I dined with Angelica - it has become a tradition that I am her guest every Sunday. In the morning we had driven to the Barberini palace to see Raphael's portrait of his mistress. It is a great pleasure to look at paintings with Angelica, for she has a trained eye and knows a great deal about the technical side of painting. Moreover she is sensitive to all that is true and beautiful, and incredibly modest. Goethe did not praise Angelica's painting skills as much as her artistic judgement: Angelica is painting me, but her picture is not going to come off. She is very disappointed that it is making no progress and is not like me. It remains the portrait of a handsome young fellow without any resemblance to me whatever.
Italian Journey - translation by W. H. Auden and E. Mayer - Collins 1962. 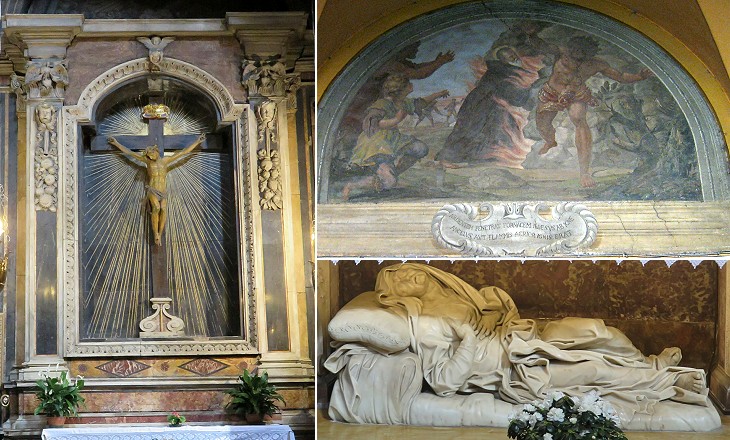 (left) Cappella Accoramboni with a marble decoration by Giovanni Somazzi, a skilled stonecutter who worked also at Cappella Spada at S. Girolamo della Carità; (right-above) painting in the cloister depicting a miracle by St. Francis of Paola (he brought his pet lamb back to life after its bones had been thrown into a furnace); (right-below) St. Anne by Giovan Battista Maini, almost a copy of Bernini's Blessed Ludovica Albertoni

S. Andrea delle Fratte houses some very interesting funerary monuments, which you can see in pages covering Baroque Tombs Showing the Dead in a Medallion and Baroque Statues in the Act of Praying. 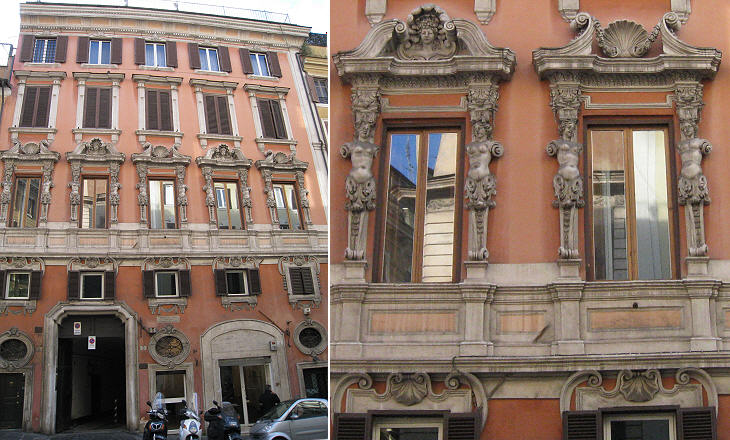 The rich decoration of this small palace is the only work by Francesco Rosa. It was built in 1732-742 and it was in part rented (see my page on flats for rent in XVIIIth century Rome). This explains why the stucco decoration is based on generic symbols, rather than on the heraldic ones of the owners of the building. Owing to the small statues which decorate its main windows the palace is usually called Palazzo dei Pupazzi (puppets), although another Palazzo dei Pupazzi exists in Rione Ponte. 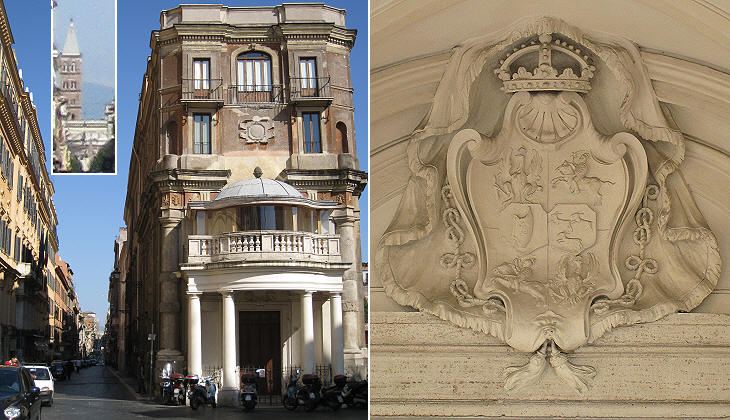 (left) Facade and Strada Felice linking SS. Trinità dei Monti with S. Maria Maggiore (in the inset); coat of arms of Queen Maria Casimira in the ceiling of the porch

Prince Alexander Sobieski followed his mother Queen Maria Casimira when in 1699 she came to Rome for the Jubilee Year 1700; the Kingdom of Poland was not a hereditary monarchy and after the death in 1696 of King John III Sobieski, the saviour of Vienna in 1683, a German prince was elected to the throne of Warsaw. In Rome Maria Casimira and her retinue of 120 noblemen and servants were hosted by Prince Livio Odescalchi in his palace.
The Queen decided to remain in a sort of voluntary exile after the Jubilee Year and she rented Palazzo Zuccari at the end of Strada Felice; she lived there until 1714: after the death of her son she returned to France, her native country, where she died in 1716.
Her name continued to be associated with this palace until 1799 when Arco della Regina, a wooden arch she had built across Strada Felice (today's Via Sistina) was demolished. The small porch and the balcony (attributed to Filippo Juvarra) were added by the Queen to enjoy a better view over Rome. 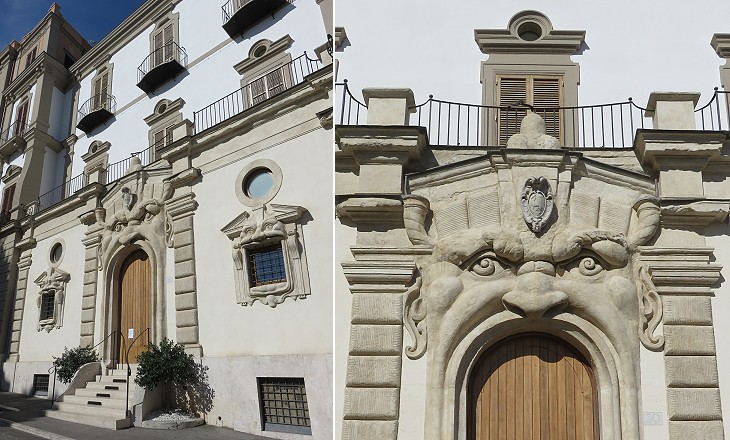 The palace was originally built by painter Federico Zuccari at the end of the XVIth century; it was enlarged and modified several times but its side on Via Gregoriana retains an amazing decoration which calls to mind the monsters of Bomarzo. Actually Zuccari might have visited Bomarzo while he was decorating Palazzo Farnese di Caprarola. 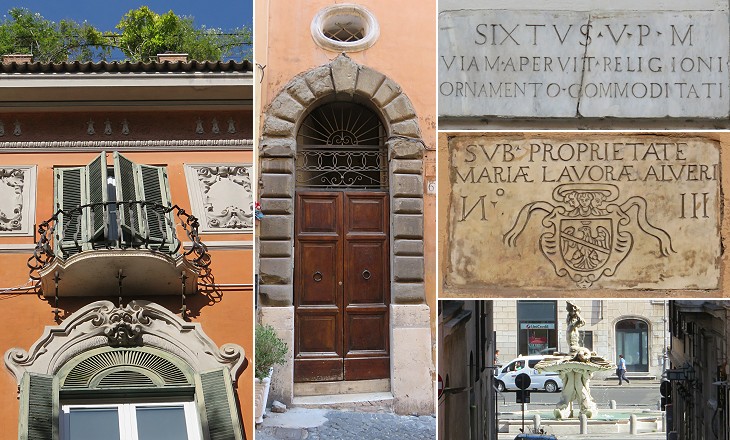 A stroll in the neighbourhood: (left) a house in Via Gregoriana (you may wish to see some commemorative plaques in this street); (centre) Via della Purificazione, behind S. Giuseppe, where the street level was lowered to reduce its steepness; (right-above) plaque celebrating the opening of Strada Felice by Pope Sixtus V; (right-middle) property plaque of Maria Laura Alveri (Alvarez) near S. Giuseppe, she was the wife of a Cardelli; (right-below) Fontana del Tritone from Via della Purificazione 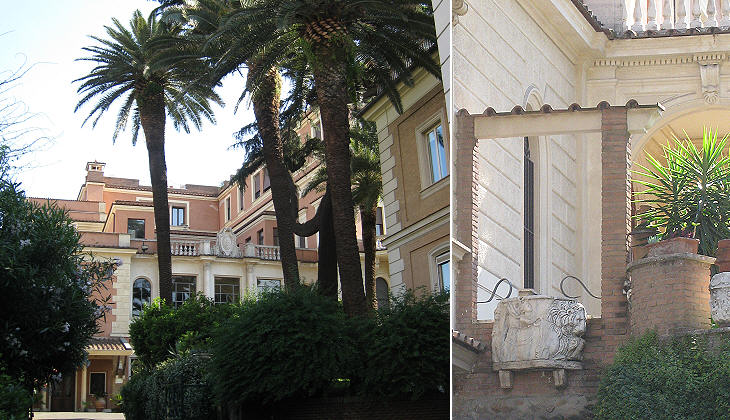 Queen Maria Casimira was allowed to build Arco della Regina so that she could directly reach a small villa she had rented on the other side of Strada Felice. Originally the villa belonged to the Orsini, but in 1611 it was bought by the Friars of SS. Trinità dei Monti who rented it; from the end of the XVIIIth century its tenants were mainly German. In 1878 it was bought by Russian Count Aleksey Bobrinsky who almost entirely rebuilt the old casino. He planted many rose bushes so that the villa became known as Villa delle Rose; Villa Malta, its other name, is due to the fact that one of the tenants was Jacques-Laure Le Tonnelier, Bailiff of Bréteuil, ambassador of the Order of Malta to the Pope in 1759-777.
According to tradition two palm trees of the garden were planted following a request made by J. W. Goethe at the end of his second Roman stay when he was about to rent the villa on behalf of Duchess Anna Amalia of Brunswick-Wolfenbüttel. 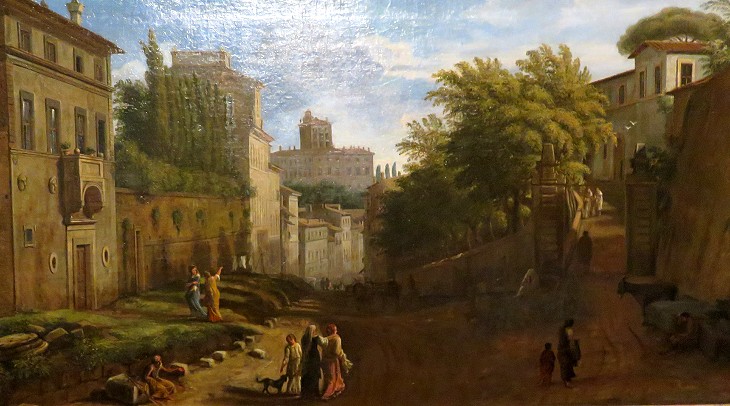 Museo di Roma a Palazzo Braschi: Gaspar Van Wittel (ca 1690): View of Via di Porta Pinciana, near the gate of Villa Medici going downhill towards S. Giuseppe a Capo le Case. The painting shows a building of Villa Ludovisi and the walls of the Franciscan monastery of S. Isidoro to the left, Villa delle Rose to the right and Palazzo del Quirinale in the distance