Convento di S. Francesco a Ripa
(Vasi at work in the Grand View of Rome) 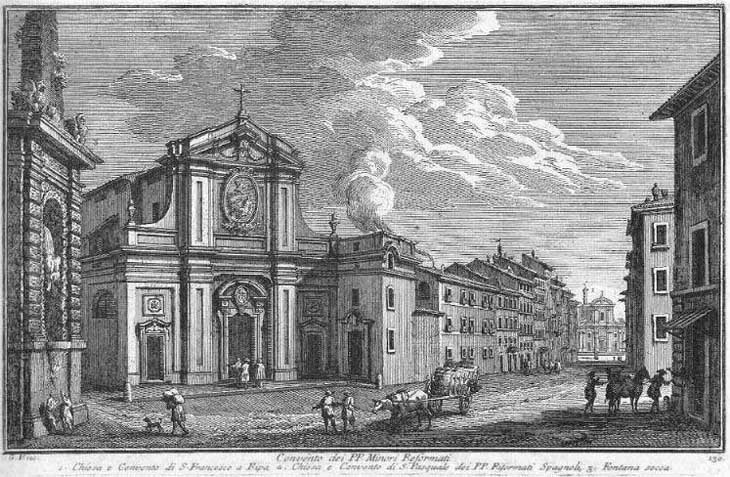 Pope Paul V and his nephew Cardinal Scipione Borghese did much to improve the living conditions of the inhabitants of Trastevere; Acqua Paola, the aqueduct built by the Pope, provided the quarter with an ample supply of water which was distributed by monumental fountains such as that shown in this 1756 etching by Giuseppe Vasi; Cardinal Borghese thoroughly restored S. Grisogono; in 1611 the Pope opened Stradone di S. Francesco, a new street between S. Callisto, very near S. Maria in Trastevere and S. Francesco a Ripa, behind which Porto di Ripa Grande, the river harbour of Rome, was located.
The Pope ordered those who built houses along the new street to plant elm trees in front of them, but at Vasi's time this regulation was disregarded and the fountain built by the Pope was dry. The plate is meant to cover S. Francesco a Ripa, but Vasi chose to give more evidence to S. Pasquale Bailonne, a church which was a very new addition (1745) to the monuments of Rome.
The view is taken from the green dot in the 1748 small map below. In the description below the plate Vasi made reference to: 1) S. Francesco a Ripa; 2) S. Pasquale; 3) Fontana secca (dry). The map shows also 4) Palazzo Dal Pozzo; 5) S. Callisto which is shown in another page. 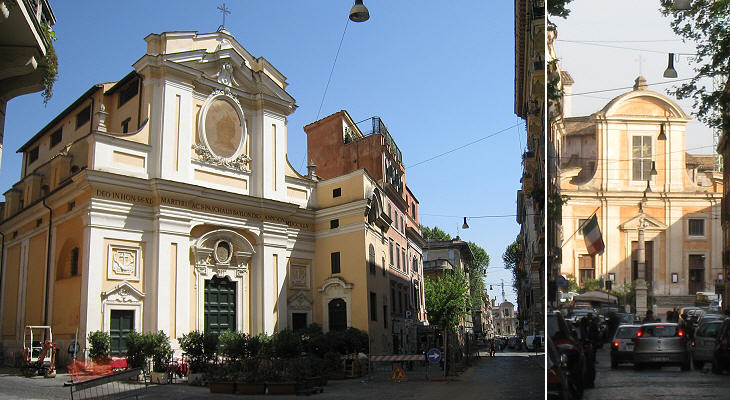 The dry fountain which was decorated with dragons, one of the heraldic symbols of the Borghese, was already in poor condition at Vasi's time and in ca 1890 it was pulled down. The long street leading to S. Francesco a Ripa is crossed by Viale Trastevere which was opened in the 1880s, but this change does not really impact on the view.
The column in front of S. Francesco a Ripa comes from the ancient town of Veii and it was used with others to embellish Palazzo del Vicegerente in Piazza Colonna. Pope Pius IX relocated it in 1847; it replaced the 1685 column which can be seen in the plate. 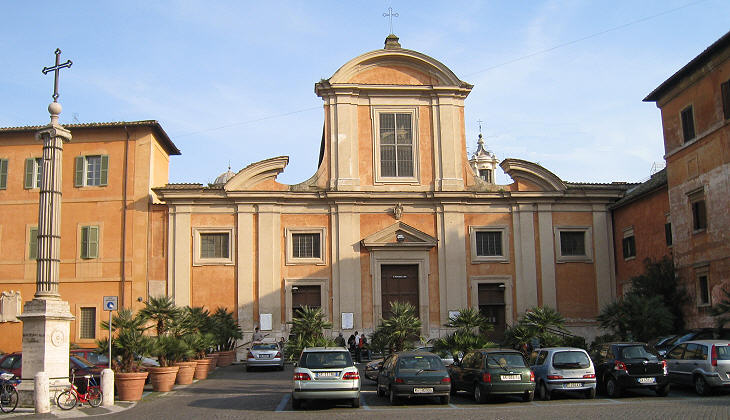 When St. Francis of Assisi came to Rome to foster the recognition of his order he resided in a hostel near Porto di Ripa Grande; the building included a small church dedicated to St. Blaise; the complex belonged to the Benedictines of S. Cosimato, but in 1229 Pope Gregory IX gave it to the Franciscans; it was their first friary in Rome and they dedicated it to the founder of their order.
In 1249 the Franciscans were given S. Maria in Aracoeli, however, because St. Francis had lived there, they retained also their first monastery. You may wish to see the church in a 1588 Guide to Rome. 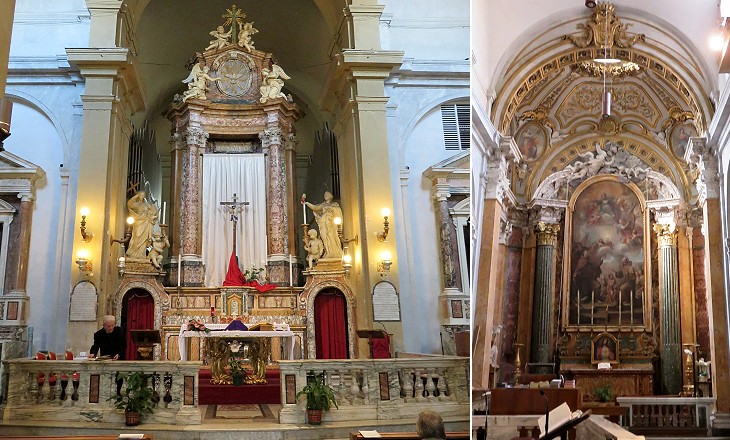 In 1671 Pope Clement X beatified Ludovica Albertoni, a XVIth century member of the Secular Franciscan Order who was buried at S. Francesco a Ripa and a distant relative of the Pope; the construction of a monument to her by Gian Lorenzo Bernini was followed by a thorough renovation of the church by Mattia de' Rossi, a pupil of Bernini. The new building attracted the interest of some noble families who had close ties with the Franciscan Order or had acquired importance in the second half of the XVIIth century and did not have a family chapel in the city, e.g. the Rospigliosi who came to Rome from Tuscany after Cardinal Giulio Rospigliosi was elected Pope Clement IX in 1667. 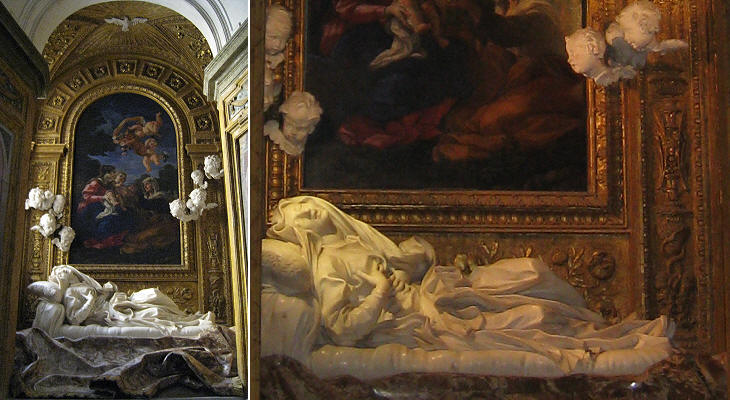 The Franciscans were in favour of very simple tombs, yet they could not prevent Gaspare Paluzzi Albertoni Altieri, husband of a niece of Pope Clement X, to build a lavish chapel for Blessed Ludovica Albertoni. It is one of the last works by Bernini; although its design and decoration are not as elaborate as in Cappella Cornaro at S. Maria della Vittoria, yet it shows how the artist combined architectural design, statues, paintings, stuccoes and gilding to obtain the desired effect. The chapel did not house other funerary monuments. The Albertoni had a chapel at S. Maria in Aracoeli and eventually another one at S. Maria in Campitelli.
You can see more views of this chapel in another page and the statue of St. Anastasia by Francesco Aprile and Ercole Ferrata which was designed after that of Blessed Ludovica Albertoni. 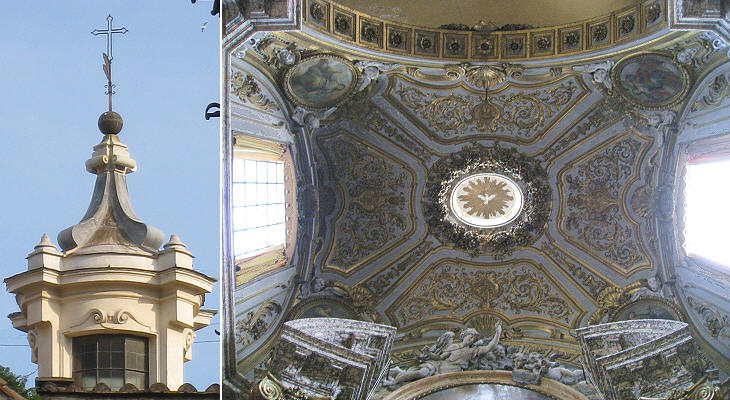 The chapel was built at the initiative of Camilla Pallavicini, wife of Giovanni Battista Rospigliosi, Duke of Zagarolo. She came from a rich family from Genoa. The couple bought a palace on the Quirinale. The monuments in the chapel are among the most gruesome examples of the fashion of the time for skeletons.
In the short novel San Francesco a Ripa by Stendhal, Jean de Sénecé, the main character, is chased by a band of assassins; he seeks refuge into the church where he discovers that his own funeral is taking place. Perhaps Stendhal was influenced by the monuments of this chapel. 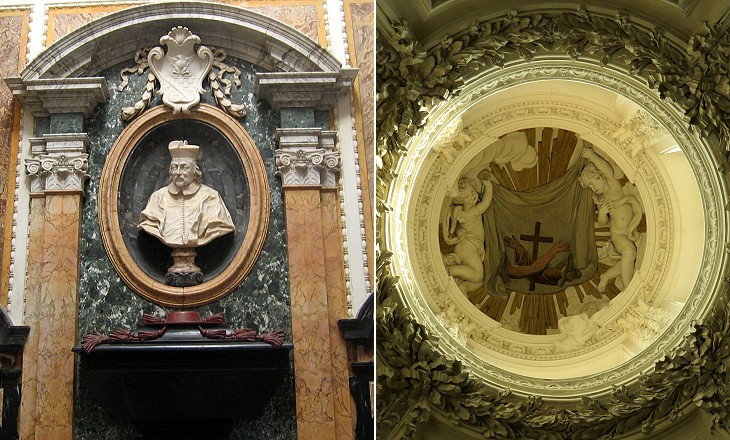 Cappella Mattei: (left) monument to Cardinal Orazio Mattei (d. 1687) by Lorenzo Ottoni; (right) lantern of the little dome with the symbol of the Franciscan Order

The Mattei were a family of old nobility and similar to the Albertoni they had a chapel at S. Maria in Aracoeli. They built a branch of it at S. Francesco a Ripa. The chapel was in part redesigned in the late XIXth century, but the elaborate decoration of the lantern was retained. It brings to mind that above the main altar of S. Andrea al Quirinale and it shows the attention to details which characterized the decoration of the chapels. 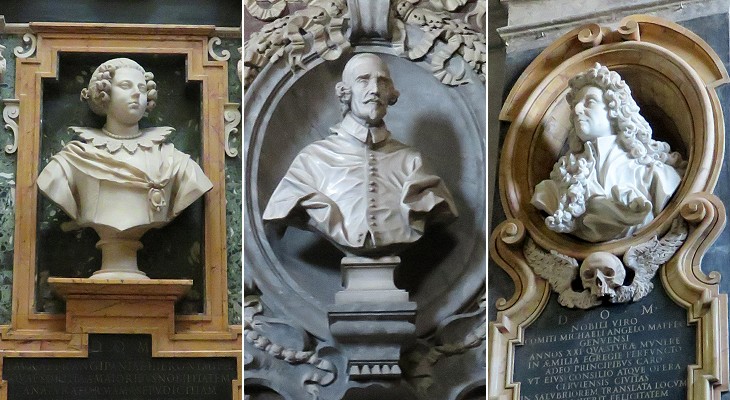 By placing similar funerary monuments in a chronological order it is possible to notice the evolution of the genre; the bust by Andrea Bolgi is set in a very elegant frame, which however is not coordinated with the shape of the statue; the second bust by Domenico Guidi is inserted into an oval which follows the curved lines of the Cardinal's shoulders; finally the third bust comes out from the frame and it gives the impression that the rest of the body is inside the wall. You may wish to see other pages on Baroque Sculpture. 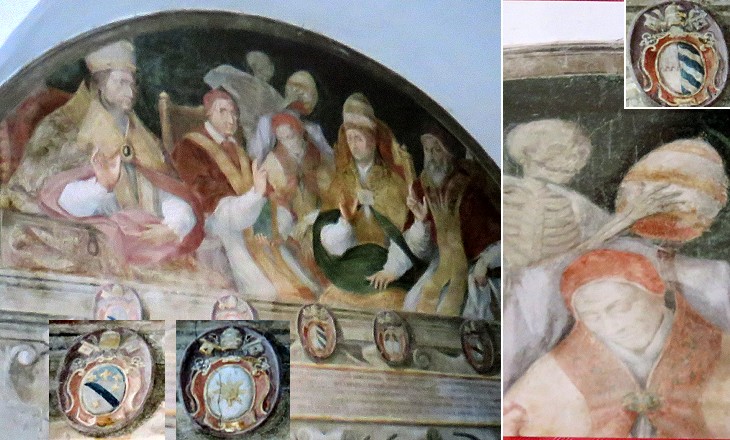 Inside the friary a series of frescoes painted by Fra' Emanuele da Como in 1686 celebrate the Franciscan Order. One of them shows five Franciscan Popes: from the left Nicholas IV, Alexander V, Adrian V, Sixtus IV and Sixtus V. Adrian V lived only 38 days after being elected in July 1276, thus the painter showed Death removing the papal crown from his head. The Pope died in the Franciscan monastery of Viterbo where he was buried in a fine monument by Arnolfo di Cambio.
The coats of arms of Adrian V and of Alexander V are the only ones of these popes which can be seen in Rome (today Alexander V is considered an antipope: he was elected in June 1409 in Pisa where he died in May 1410, without ever being able to reside in Rome).
In 1769 Cardinal Giovanni Vincenzo Ganganelli, another member of the Franciscan Order, was elected Pope Clement XIV. 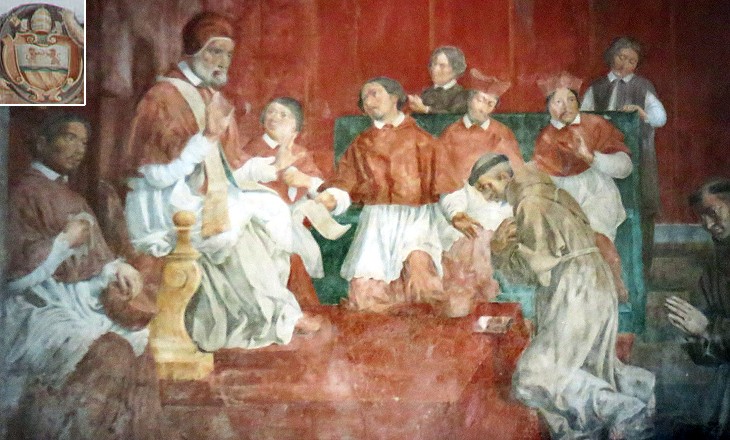 Pope Honorius III Savelli and St. Francis of Assisi; (inset) coat of arms of the Pope

The convent contains the room (approached through the church) in which St. Francis lived, during his visits at Rome, with many relics of him. His stone pillow and his crucifix are shown, and a picture of him by Jacopa de' Settesoli. An altar in his chamber supports a reliquary in which 18,000 relics are displayed!
Augustus J. C. Hare - Walks in Rome - 1875 Edition
In 1873 the major part of the friary was confiscated and turned into a barracks. 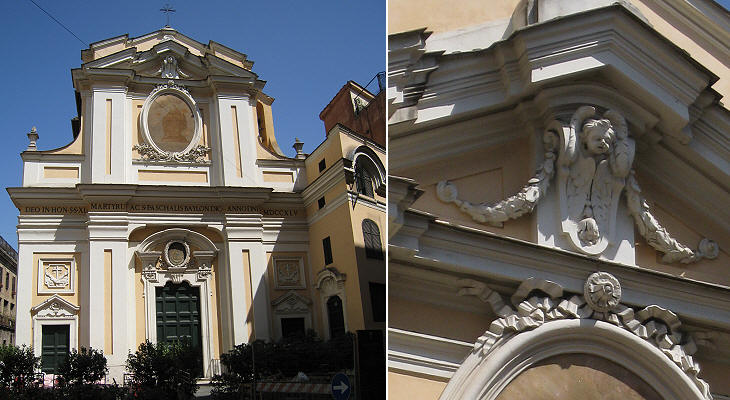 The church and the adjoining friary were built in 1745 by Giuseppe Sardi on the site of a previous church dedicated to SS. Quaranta, i.e. the Forty Martyrs of Sebaste; the decoration of the buildings shows the influence of Francesco Borromini: it is rich, but at the same time poor, as it does not make use of marble or other expensive materials (the image used as background for this page shows the entrance to the friary).
The new church was dedicated also to St. Paschal Baylon, a XVIth century Spanish Franciscan monk who was canonized in 1690, similar to a nearby house for poor girls; it was under the patronage of King Philip V of Spain, whose coat of arms was painted above the entrance. 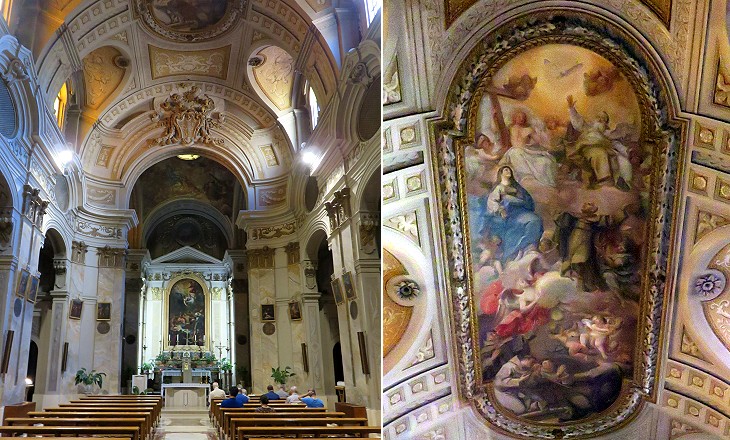 (left) Interior with the coat of arms of Cardinal Troiano Acquaviva, Spanish Ambassador to the Pope; (right) ceiling with "The Glory of St. Peter of Alcantara" by Matteo Panaria

The adjoining friary housed members of the Discalced Franciscan Order whereas S. Francesco a Ripa belonged to the (Franciscan) Reformed Friars Minor Order. The Discalced Franciscans were aka Alcantarini after St. Peter of Alcantara (1499-1562) who promoted a stricter observance of St. Francis' rule. 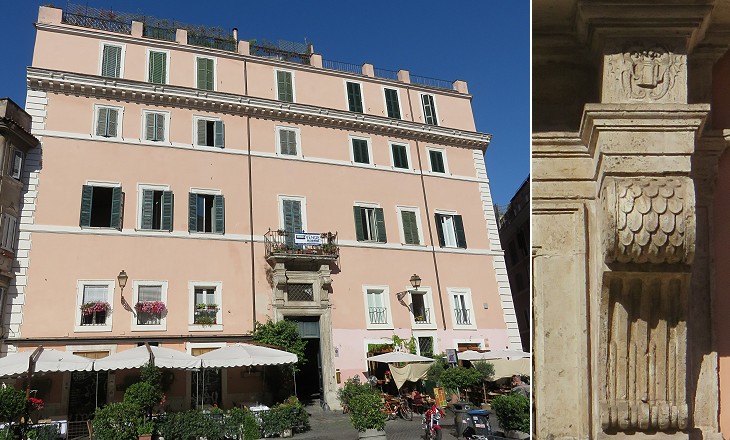 Trastevere has many churches, but very few palaces. Palazzo Dal Pozzo is located at the end of Stradone di S. Francesco and the 1748 map shows it was a very large building, but with a rather narrow entrance. It was erected in the early XVIIth century, perhaps for Cassiano Dal Pozzo (1588-1657), a patron of arts and science, who however lived in a house near S. Andrea della Valle where he gathered a collection of paintings by Nicolas Poussin. In the XVIIIth century the palace in Trastevere was turned into a hostel for poor women. It was eventually split into apartments.