Chiesa della SS. Trinità
(Vasi at work in the Grand View of Rome) 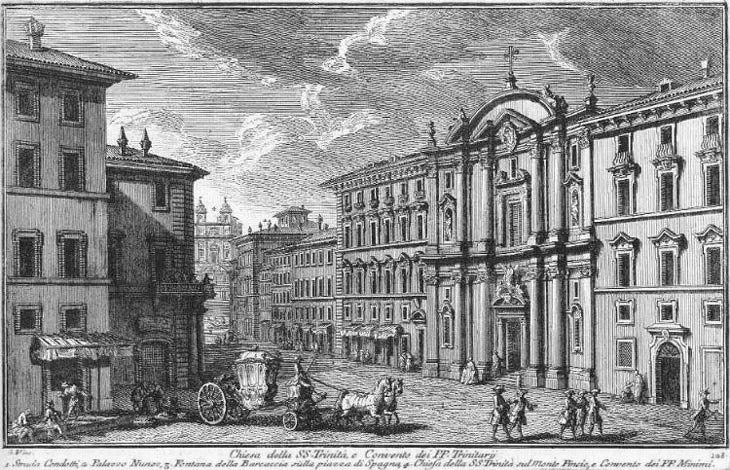 When Giuseppe Vasi published this etching in 1756 the monastery of the Spanish Calced Trinitarian Fathers had just been completed; it consisted of a home for the monks in Via Condotti, of a residence for lay members of the order at the corner with Via del Corso, opposite Palazzo Ruspoli, and of a church placed between the two buildings.
The complex provided an elegant entrance to Via Condotti which ended at Piazza di Spagna; this plate gave Vasi the opportunity to show SS. Trinità dei Monti and the steps leading to it, which he had not included in his previous etching covering that square.
The view is taken from the green dot in the small 1748 map below. In the description below the plate Vasi made reference to: 1) Strada Condotti; 2) Palazzo Nunez; 3) Fontana della Barcaccia; 4) SS. Trinità dei Monti. 3) and 4) are shown in more detail in other pages. The small map shows also 5) SS. Trinità degli Spagnoli; 6) Palazzo di Malta; 7) Palazzetto Ansellini; 8) Palazzo Maruscelli Lepri; 9) Palazzo del Principe di Polonia; 10) Palazzo Gomez Silj; 11) Oratorio del SS. Sacramento; 12) SS. Giuseppe ed Orsola. 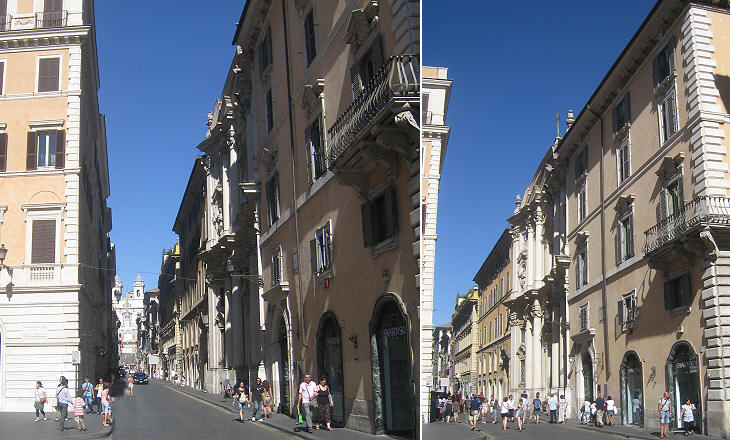 During the XIXth century some buildings along Via Condotti were enlarged by the addition of one or two storeys and/or their façades were modified, but overall the view is very similar to that shown in the etching, exception made for Obelisco Sallustiano which was placed at the top of the steps in 1789. 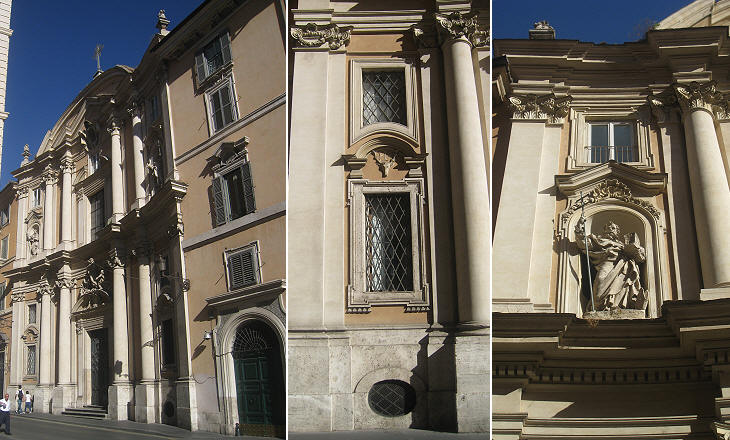 Façade and details of its design

The church was designed by Emanuel Rodriguez Dos Santos, a Portuguese architect to whom also S. Maria Maddalena is attributed. The concave façades of the two churches are similar, but that of the Trinitarians has a less rich decoration. In 1895 the church was assigned to the Spanish Dominicans. 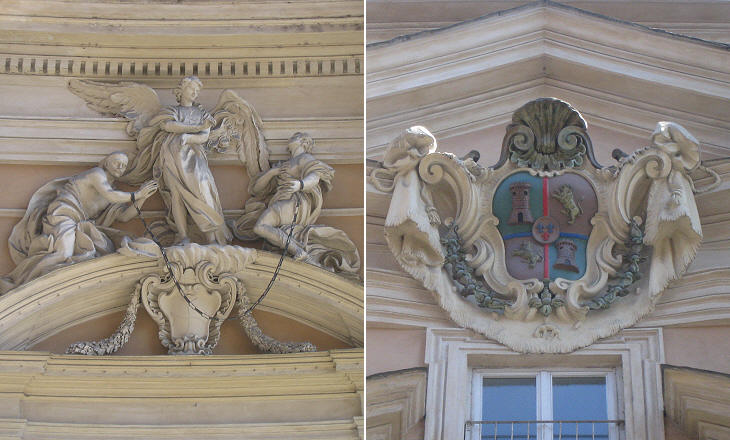 (left) An angel is about to free two slaves by Pietro Pacilli; (right) coat of arms of Castile and Léon, historical regions of Spain, where the Trinitarians had many communities

The Trinitarian Order was founded by St. John of Matha at the beginning of the XIIIth century and it had among its key objectives that of ransoming Christian slaves; the saint lived in two small rooms near S. Tommaso in Formis, the first Roman monastery and hospital of the order; according to tradition he saw a stag bearing on his head the blue and red cross which became the emblem of the order (see the image used as background for this page), a vision similar to that of St. Eustace.
In the following centuries the order split into Calced and Discalced Trinitarians and along national divides (the Discalced wore sandals rather than shoes and followed stricter rules than the Calced). The Spanish Discalced Trinitarians had their monastery at S. Carlo alle Quattro Fontane and the French Trinitarians at S. Dionigi Areopagita (a lost church). 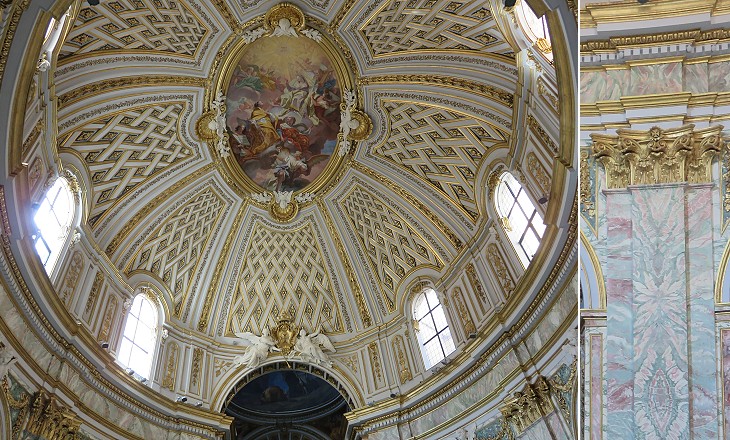 (left) Interior of the dome; (right) detail showing the use of fake marbles

Foreign travellers rarely peered into this church which does not house important works of art. Until 2010 its dingy aspect and poor XIXth century repainting did not permit a proper appreciation of the design of its interior and in particular of the ceiling of its dome. Balcony for the cantors with symbols of Castile. You may wish to see a page on Organs and Cantorias in the Churches of Rome The Nunez were a family of Spanish origin who came to live in Rome at the time of Pope Alexander VI; their palace in Via Condotti was designed by Giovanni Antonio de' Rossi in 1659. In 1842 it was bought by Marino Torlonia, Duke of Poli, who commissioned a large renovation of its interior; the façade was given a more austere appearance, with the exception of the cornice which retains an elaborate decoration. 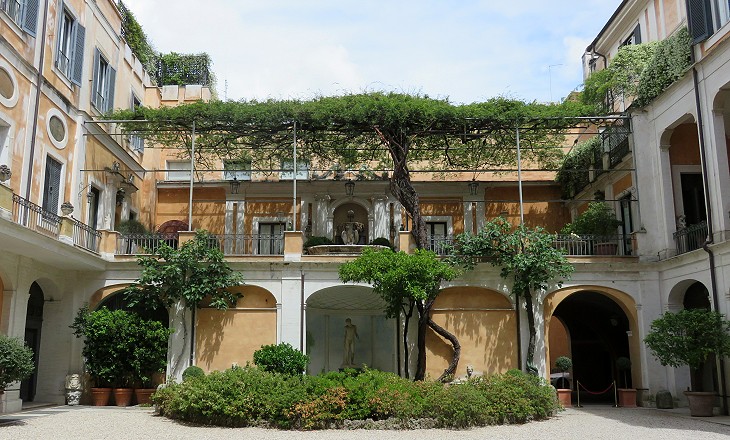 The property was enlarged on the side of Via Bocca di Leone and a wide courtyard was designed by Antonio Sarti between the old and the added buildings. The architect is best known for Nuova Fabbrica del Tabacco in Trastevere and Chiesa del SS. Salvatore at Terracina. 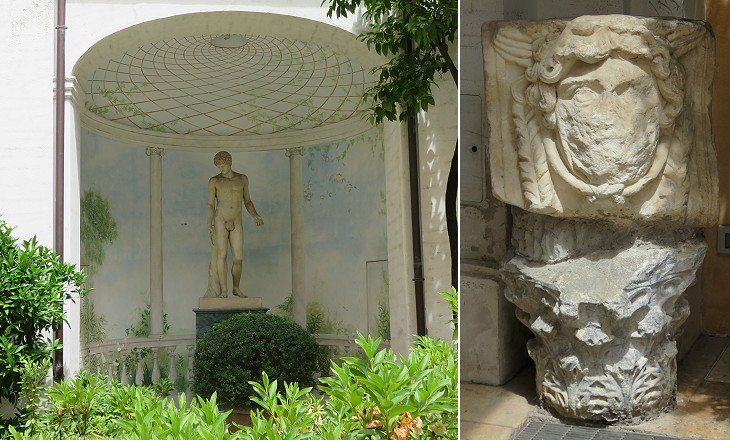 Courtyard: (left) copy of an ancient statue of Antinous; (right) an ancient relief portraying Medusa upon a capital; it resembles a relief at Palazzo Rondinini which was much praised by J. W. Goethe

The Torlonia wanted to have palaces and villas similar to those of older noble Roman families and for this reason they acquired a number of ancient statues and reliefs which were complemented by modern copies. This is particularly evident in the decoration of Villa Torlonia in Via Nomentana. In 1866 the Torlonia bought Villa Albani; they already owned Palazzo Bolognetti and Palazzo Campeggi Giraud. 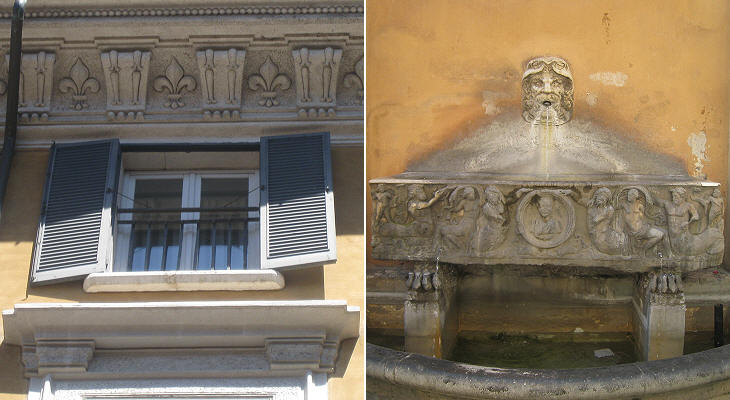 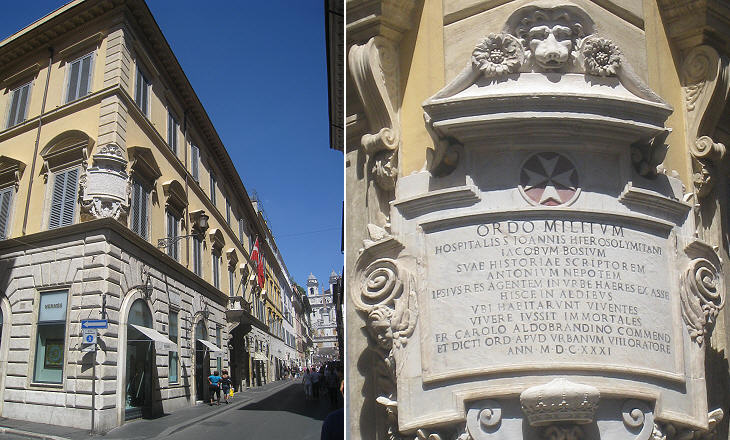 In 1522 the Knights Hospitaller of St. John were forced by the Ottomans to surrender Rhodes; they withdrew to Crete, at the time a Venetian possession, until 1530 when they were given Malta by Emperor Charles V; they ruled the island until the French conquest in 1798. Their representatives in Rome lived in a palace in Via Condotti which was repeatedly modified in the XIXth century: it retains an original 1631 inscription celebrating a bequest of properties to the Knights by Antonio Bosio (1575-1629), a Maltese who wrote Roma Sotteranea, the first description of the Catacombs of Rome. On December 8, Festa dell'Immacolata, the balcony is decorated with ancient drapery for the passage of the pope. The Knights have a large property on the Aventine Hill and a smaller one inside Foro di Augusto. 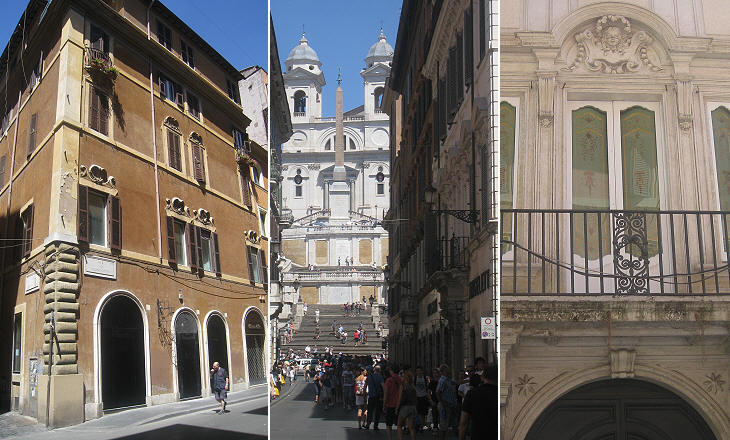 The artists in Rome form a numerous body, social in their tastes and gregarious in their habits. The distinctions of blood and speech give way under the fusing influence of a common devotion to the same pursuits. (..) The outward appearance of the whole class expresses a pursuit of the picturesque under difficulties. The hair and heard are taught to curl and wave in such a manner as to give, if possible, a romantic and ideal character to commonplace features. (..) They generally dine at the Lepri, in the Via Condotti, and take their coffee in the Cafe Greco, in the same street, a dark and dirty hole, reeking with the fumes of bad tobacco. Many of them add music to their other accomplishments, and in the evening their voices often gratefully break the deep silence of the streets of Rome.
George Stillman Hillard - Six Months in Italy in 1847-1848
The original name of the street was Via Trinitatis (see it whole); its section east of Via del Corso was usually known as Via de' Condotti because of the conduits which were laid along the street to distribute the water of Acqua Vergine, an ancient aqueduct which was repaired by Pope Sixtus IV. When Via de' Condotti became the main street of the Strangers' Quarter, the humble origin of its name was forgotten; the description below the plate and the small map call it Strada Condotti (in this way it sounds as if Condotti designated a noble family); today it is the heart of a shopping district which is in the process of losing its traditional aspect because chain stores replace the old historical shops.
In many XVIIIth century palaces along the street landlords lived on the first floor (that above the ground level) and the rest of the building was split into flats and shops which were rented. Palazzetto Ansellini and Palazzo Maruscelli Lepri are examples of this pattern (for other similar buildings see a page on Flats for Rent in XVIIIth century Rome). 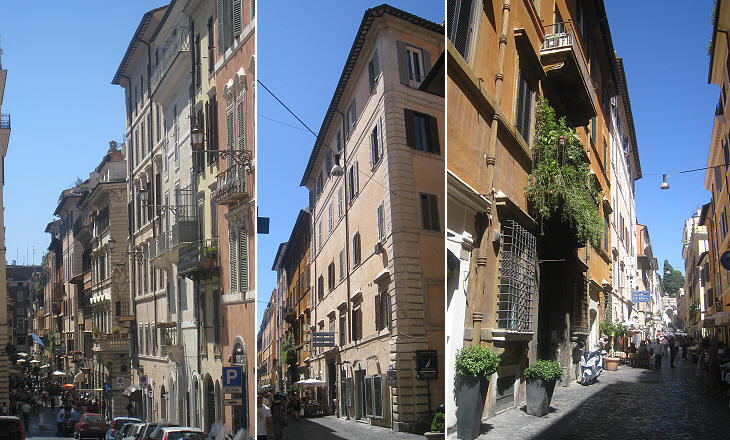 Via della Croce is a street which, similar to Via Condotti, links Via del Corso with Piazza di Spagna. Prince Stanislaw Poniatowski, a nephew of Stanislaw August II, the last King of Poland, bought some houses in this street after he settled in Rome in 1792; they were replaced by a rather ordinary building which Mariano Vasi, in an update to his father's guide to Rome, pompously called Palazzo del Principe di Polonia; as a matter of fact the building was split into apartments as the Prince preferred to live in Villa Sinibaldi Poniatowski. Not very far from Via della Croce, opposite Trinità dei Monti, Palazzo Zuccari was for some time known as Palazzo della Regina di Polonia (Queen Maria Casimira Sobiesky).
In the same street Palazzo Gomez (aka Palazzo Lepri Gallo and Silj) is another work by Giovanni Antonio de' Rossi; it was built in 1678 and it is not much different from the other buildings of the street; the architect left his mark in some details of the decoration. 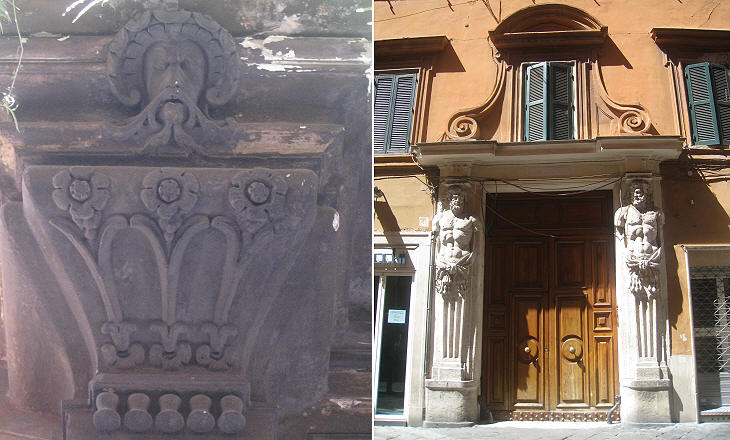 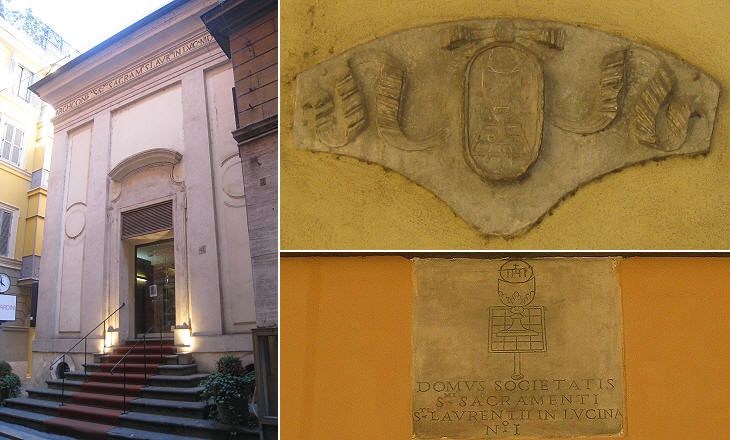 (left) Façade; (right) symbols of the brotherhood in the nearby dead-end alley: the gridiron is a reference to St. Lawrence's martyrdom

Oratorio del SS. Sacramento is not the only oratory with this name. A larger one is located near S. Maria in Via. This small building belonged to a brotherhood founded in 1576 and associated with the church of S. Lorenzo in Lucina; it was redesigned in 1724, maybe by Nicola Michetti, a Roman architect who spent many years in St. Petersburg. The oratory was deconsecrated in the XIXth century. 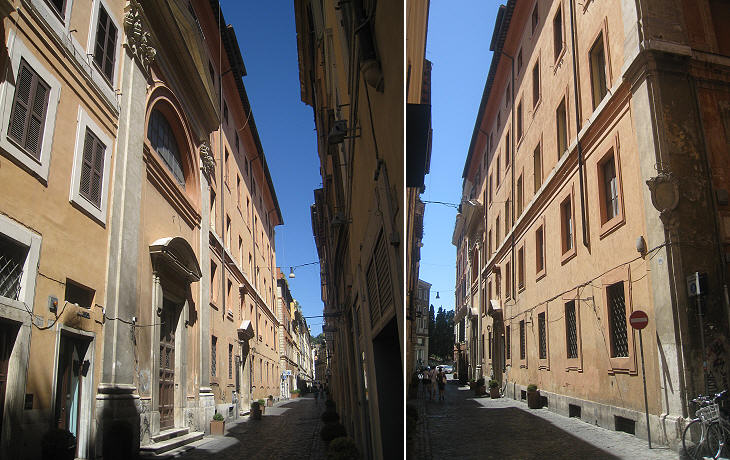 (left) Façade of the (deconsecrated) church and Via Vittoria; (right) the nunnery and at the far end of the street Mausoleo di Augusto

Camilla Orsini was the wife of Marcantonio II Borghese, nephew of Pope Paul V; in the first half of the XVIIth century she paid for the construction of a large nunnery in Via Vittoria, a street parallel to Via della Croce; the nunnery belonged to the Ursulines, an order aimed at the education of young girls. 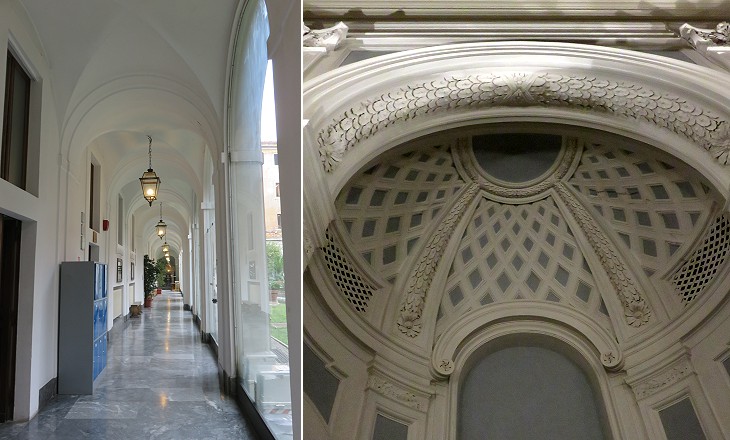 The building was confiscated by the Italian Government in 1870 and it was used to house Accademia Musicale di S. Cecilia, an institution founded in 1585 as "The Congregation of Musicians under the invocation of the Blessed Virgin, Saint Gregory and Saint Cecilia".
The facilities of the nunnery have been adapted to the needs of the Academy, but the building retains some of its original decoration. 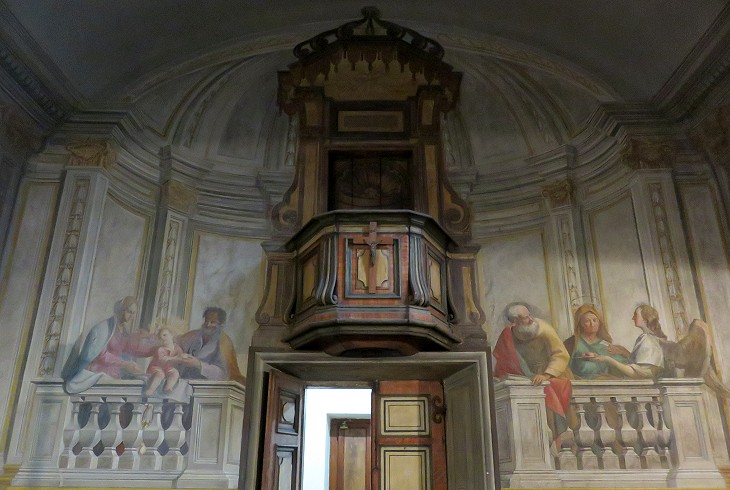