Collegio di S. Agostino
(Vasi at work in the Grand View of Rome) 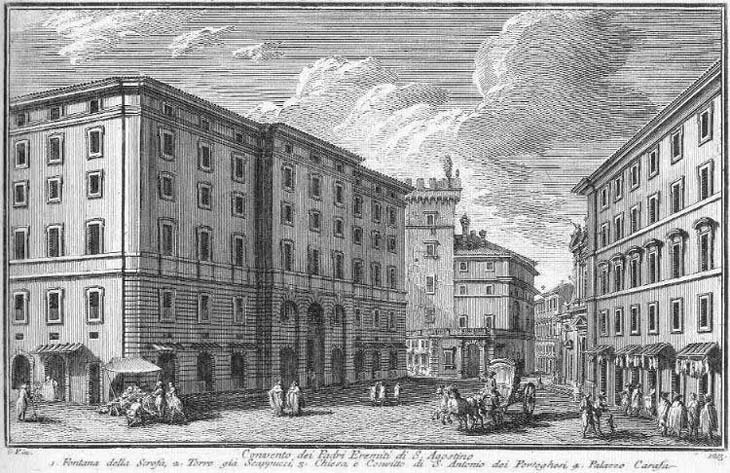 In 1756, when Giuseppe Vasi published this etching, the redesign of the Augustinian monastery by Luigi Vanvitelli was not yet completed and it is possible that Vasi based his view on projects, rather than on the actual building because some details, such as the main portal and the shops, do not correspond to the current aspect of the monastery. The view shows a rather unknown, but picturesque corner of Rome with buildings of different periods and styles: to the left the severe design of the monastery, at the centre a medieval tower which was incorporated into a late XVIth century palace and to the right the baroque façade of S. Antonio dei Portoghesi.
The view is taken from the green dot in the small 1748 map here below. In the description below the plate Vasi made reference to: 1) Fontana della Scrofa (Sow); 2) Torre Scapucci; 3) S. Antonio dei Portoghesi; 4) Palazzo Carafa, a building void of interest. The small map shows also 5) Convento di S. Agostino; 6) Biblioteca Angelica. The dotted line in the map delineates the borders among Rione Ponte (left), Sant'Eustachio (lower part of the map) and Rione Campo Marzio (upper right quarter).

Only very minor changes have occurred with the exception of the disappearance of the shops in the monastery building, assuming that they did exist; the small fountain was relocated to the corner of the street, but the ancient relief portraying a sow was left in its original location. 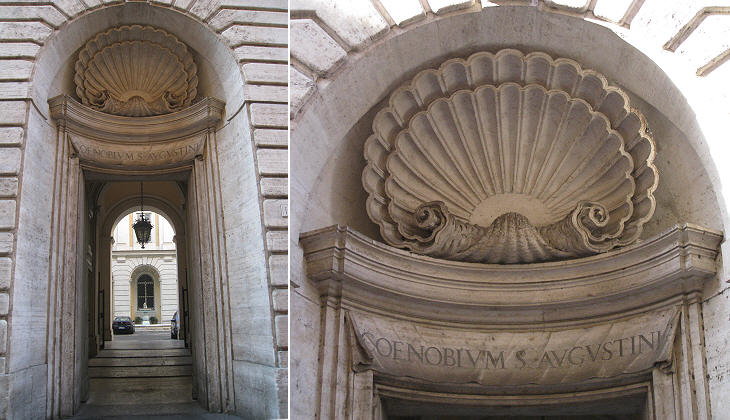 Portal designed by Luigi Vanvitelli. The shell is a symbol for St. Augustine, who had a vision of a child who told him that he could sooner empty the ocean with a shell than understand the Holy Trinity

The Augustinian Order was not founded by St. Augustine of Hippo, perhaps the most important theologian of the Western Roman Empire, but it developed in the XIIIth century with the help of the popes, who wanted to counterbalance the growing influence of Franciscans and Dominicans. The Augustinians adopted a very severe lifestyle and they expressed it also by limiting the decoration of their new monastery to the main portal. The monastery adjoins the large church of the order. Today the building belongs to the Italian State and it houses Avvocatura Generale dello Stato, the body of lawyers who defend public institutions in court.
The construction of the new monastery led to the demolition of S. Trifone in posterula a small church which was depicted in a 1588 Guide to Rome. 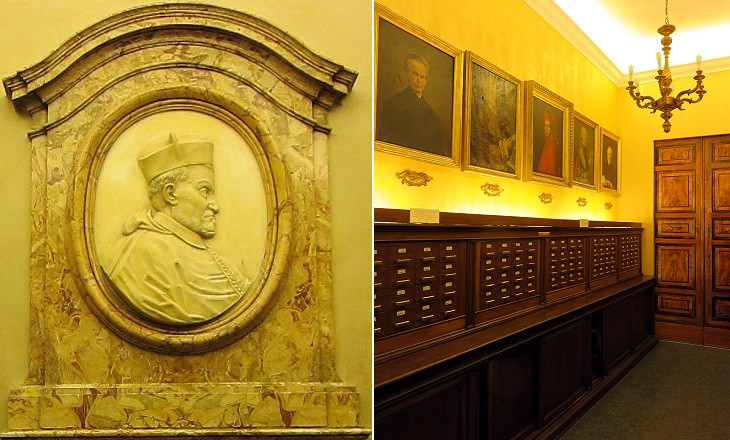 (left) Relief portraying Angelo Rocca, after whom the library is named; (right) vestibule with the traditional index file cabinets listing the books by author

In 1614 Angelo Rocca, an Augustinian theologian, opened the first public library in Rome in a house adjoining the monastery; in 1659 Pope Alexander VII asked Francesco Borromini to design an appropriate building to house the library (as he did at Archiginnasio della Sapienza). The walls were erected, but the interior of the building was completed by Luigi Vanvitelli a century later.
Biblioteca Angelica was particularly rich in books dealing with the views expressed by Cornelius Jansen (1585-1638), a Belgian theologian, whose main work was dedicated to reviving the importance of St. Augustine's teachings. The Jesuits strongly opposed Jansen and the library had many anti-Jesuit texts.
In 1871 the property of the library passed to the Italian State. It houses the library of Accademia degli Arcadi. 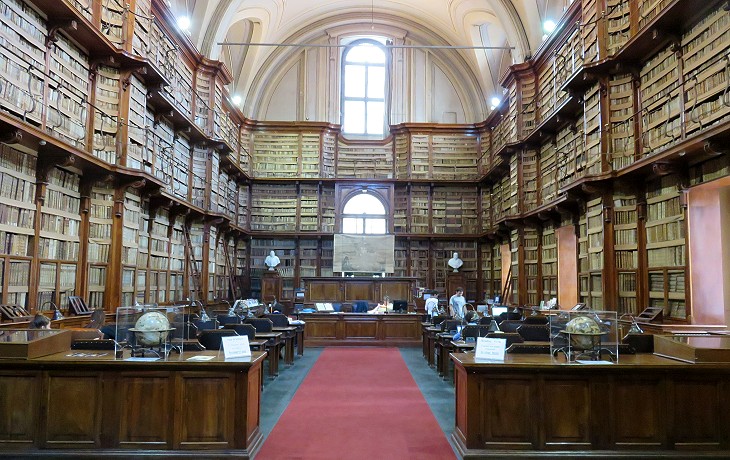 Main Hall by Luigi Vanvitelli; see some other of his works in Rome, Ancona, Pesaro and Caserta 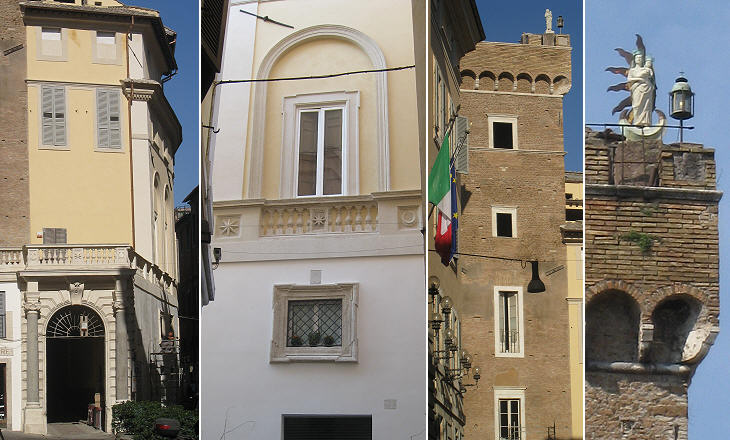 Various views of Palazzo and Torre Scapucci including its famous madonnella

The tower was most likely part of the Augustinian monastery; it was acquired by the Scapucci, who built a small late Renaissance palace around it. Mario and Francesco Scapucci are listed among the Conservatori di Roma in the XVIth century.
Mr. Thompson took me into the Via Portoghese, and showed me an old palace, above which rose - not a very customary feature of the architecture of Rome - a tall, battlemented tower. At one angle of the tower we saw a shrine of the Virgin, with a lamp, and all the appendages of those numerous shrines which we see at the street corners, and in hundreds of places about the city. Three or four centuries ago this palace was inhabited by a nobleman who had an only son, and a large, pet monkey, and one day the monkey caught the infant up and clambered to this lofty turret, and sat there with him in his arms grinning and chattering like the Devil himself. The father was in despair, but was afraid to pursue the monkey lest he should fling down the child from the height of the tower and make his escape. At last he vowed that if the boy were safely restored to him he would build a shrine at the summit of the tower, and cause it to be kept as a sacred place forever. By and by the monkey came down and deposited the child on the ground; the father fulfilled his vow, built the shrine, and made it obligatory on all future possessors of the palace to keep the lamp burning before it. Centuries have passed, the property has changed hands; but still there is the shrine on the giddy top of the tower, far aloft over the street, on the very same spot where the monkey sat, and there burns the lamp, in memory of the father's vow. Nathaniel Hawthorne - French and Italian Notebooks - 1883.
The note by Hawthorne explains why the tower is aka Torre della Scimmia (Monkey). 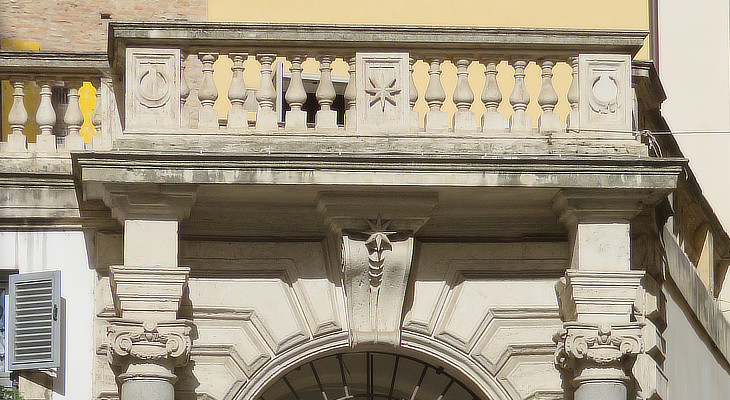 Façade and details of it

The church was founded in 1440 by Antonio Martinez de Chavez, a Portuguese cardinal (see his funerary monument at S. Giovanni in Laterano), together with the adjoining hospital; during the XVIth century the Portuguese brotherhood in Rome acquired several buildings near the church and in 1624 it decided to build a new larger church which was designed by Martino Longhi the Younger. It is dedicated to St. Anthony of Lisbon, who is also known as St. Anthony of Padua. The addition of a large coat of arms of the Bragança royal family occurred after 1640, when Portugal returned to full independence (between 1580 and 1640 the country was linked to Spain by a personal union and the Habsburg King of Spain was also the King of Portugal). The construction of the church and in particular of the upper part of the façade was completed by Carlo Rainaldi and Cristoforo Schor in 1695. 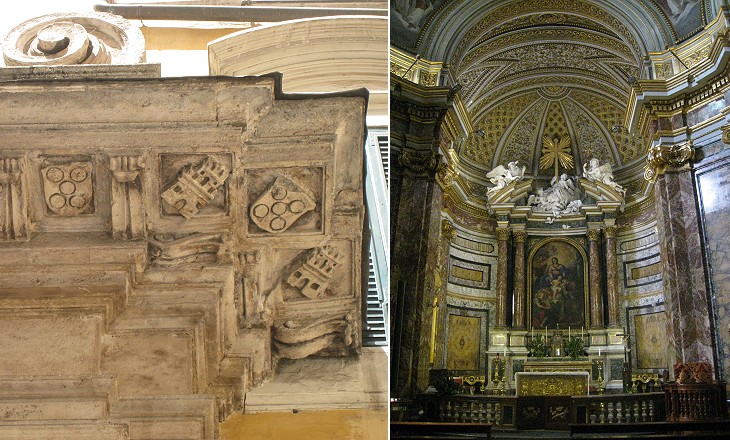 (left) Heraldic symbols of Portugal on the cornice of the building; (right) interior

You can see its organ in a separate page. You may wish to see a directory of national churches in Rome. (left) Ancient relief, which can be seen also in the image used as background for this page; (right) the current location of the fountain

This tiny fountain was most likely built at the time of Pope Gregory XIII when conduits brought Acqua Vergine to this part of Rome. The relief gives its name to Via della Scrofa, the southern section of Via di Ripetta.