Porta Portese
(Vasi at work in the Grand View of Rome)

Links to this page can be found in Book 1, Map C3, Day 6 and Rione Trastevere. 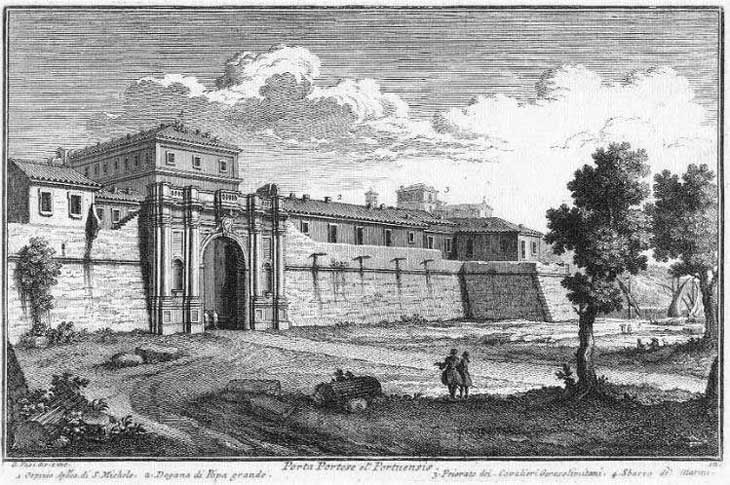 This 1747 etching by Giuseppe Vasi shows what at that time was the newest gate of Rome together with Porta S. Pancrazio. It was built in the 1640s to replace Porta Portuensis, an ancient gate which Vasi showed in a small etching based on a drawing. The position of the new gate was closer than the old one to the populated part of Trastevere and to Porto di Ripa Grande, its main harbour. In the XVIIIth century the development of the latter led to building a shipyard, granaries and other docks outside the gate. Via Portuense, the road which started at Porta Portese was a very minor one and therefore Vasi did not show any carriages going through it.
The view is taken from the green dot in the small b/w 1748 map here below. In the description below the plate Vasi made reference to: 1) Ospizio di S. Michele; 2) Dogana (customs) di Ripa Grande; 3) S. Maria del Priorato; 4) dock for unloading marbles. The b/w map shows also 5) Porta Portese. 1), 2) and 3) are covered in other pages. The coloured map (ca 1880) shows: 5) Porta Portese; 6) approximate site of Horti Caesaris; 7) approximate site of Necropoli Portuense; 8) S. Passera. Castello della Magliana, a hunting lodge, is located five miles south of Porta Portese. 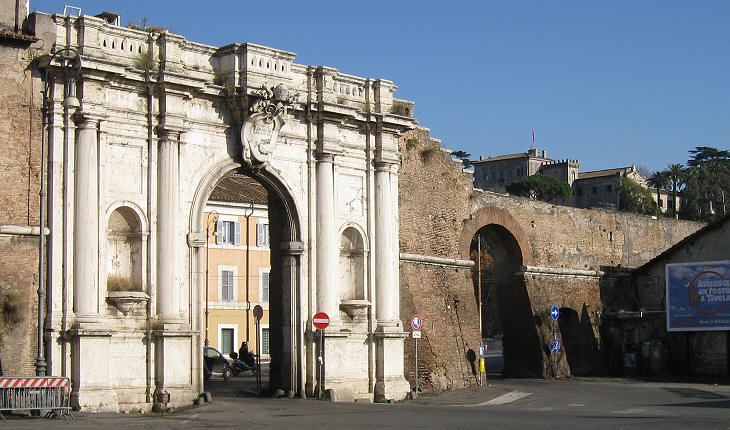 Today Porta Portese is best known for its Sunday flea market. The custom house which stood behind the gate was pulled down in 1915 and this facilitates the view over S. Maria del Priorato. The gate serves only local traffic needs; cars coming from the city continue to pass through it, whereas a modern opening is reserved to those going the other way. 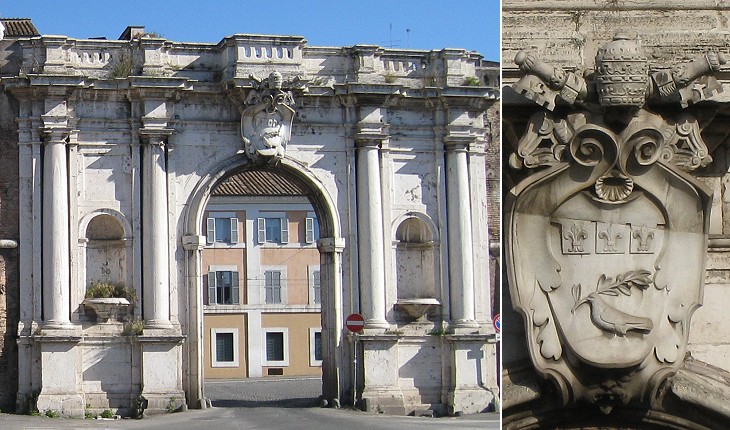 The gate was designed by Marcantonio De' Rossi, the military architect in charge of the construction of new walls around Trastevere. He followed the pattern established by Antonio da Sangallo the Younger at Porta S. Spirito, an unfinished gate.
The walls were built at the initiative of Pope Urban VIII, but the gate was not yet completed when the Pope passed away in 1644. Pope Innocent X, his successor, immediately ordered that his coat of arms should be placed on the gate, but he did not care to complete it: no statues were placed in the niches, nor a tower was built above it, as it had been done at Porta S. Pancrazio, the other gate of the new walls.

Exhibits from the Museums (Horti Caesaris)

Musei Vaticani: relief depicting the birth of Dionysus from the thig of Zeus. It was found near Porta Portese and it is recorded at the Vatican since the early XIXth century

Zeus loved Semele and bedded with her unknown to Hera. Now Zeus had agreed to do for her whatever she asked, and deceived by Hera she asked that he would come to her as he came when he was wooing Hera. Unable to refuse, Zeus came to her bridal chamber in a chariot, with lightnings and thunderings, and launched a thunderbolt. But Semele expired of fright, and Zeus, snatching the sixth-month abortive child from the fire, sewed it in his thigh. (..) At the proper time Zeus undid the stitches and gave birth to Dionysus (hence the god is called twice born), and entrusted him to Hermes.
Apollodorus - The Library - Translation by Sir George Frazier.
The three women behind Hermes have been identified with Lucina or Nysa, Persephone and Ceres who all are associated with motherhood and child rearing. Dionysus was eventually entrusted to the care of Silenus, a satyr. The relief is interesting because of its unusual subject and shallow depth. It is a IInd century AD Roman copy of a lost Greek original. 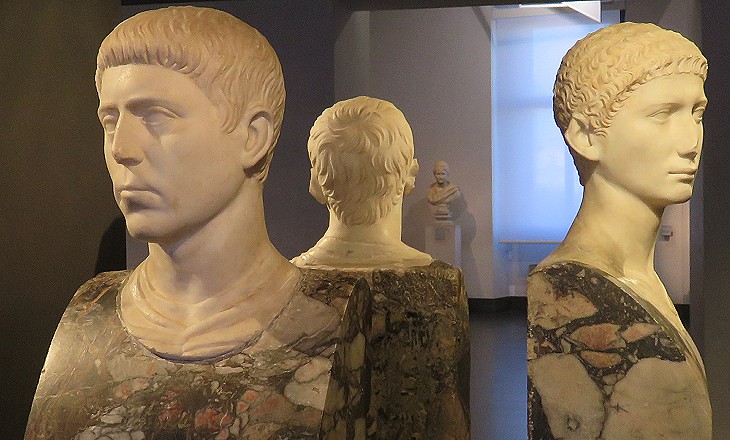 Museo Nazionale Romano: Busts of charioteers from a temple to Hercules

In 1889, during excavations for the construction of a railway station, elements of a temple to Hercules were unearthed. Archaeologists found seven busts of charioteers in addition to small statues of the god and dedicatory inscriptions to him.
In antiquity the site was known as Horti Caesaris, a suburban villa which belonged to Julius Caesar and where most likely Cleopatra lived during her Roman stay in 46-44 BC. 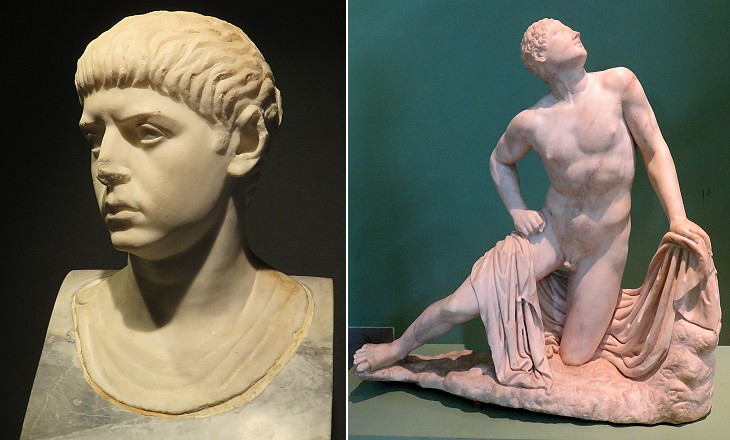 Roman charioteers could earn substantial rewards for winning races at Circus Maximus. They were able to build themselves fine funerary monuments, e.g. that of P. Aelius "Gutta" Calpurnianus, and to dedicate a bust to Hercules, a symbol of athletic victory. An analysis of the hairstyles of the charioteers indicates that they lived in the Ist/early IInd century AD.
In 1956, in a street not far from the railway station, a life-size statue was found. It portrays one of the sons of Niobe who is about to be killed by Apollo and Diana. A copy of this statue can be seen in the gardens of Villa Medici with those of other children of Niobe. 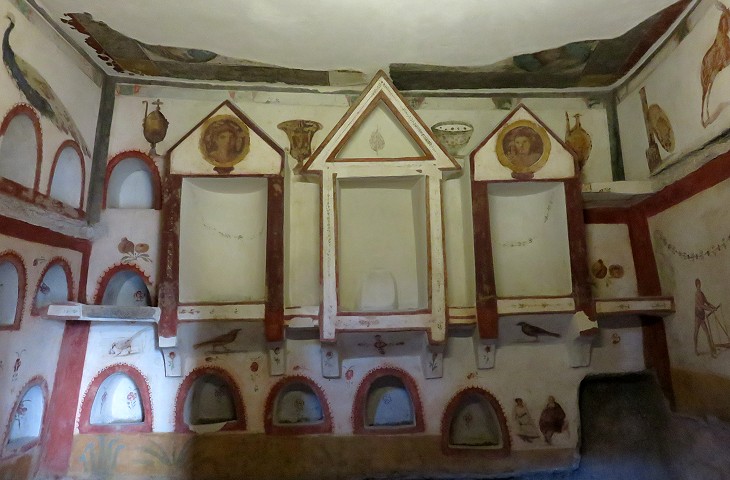 Via Portuense was important in antiquity because it led to Portus, an artificial harbour built by Emperor Claudius and enlarged by Emperor Trajan. The road crossed a hilly area immediately outside the walls. After WWII this area was developed and in 1951 a necropolis was unearthed. It included two tombs which were excavated into the rock. They were relocated to a hall of Terme di Diocleziano in their entirety. 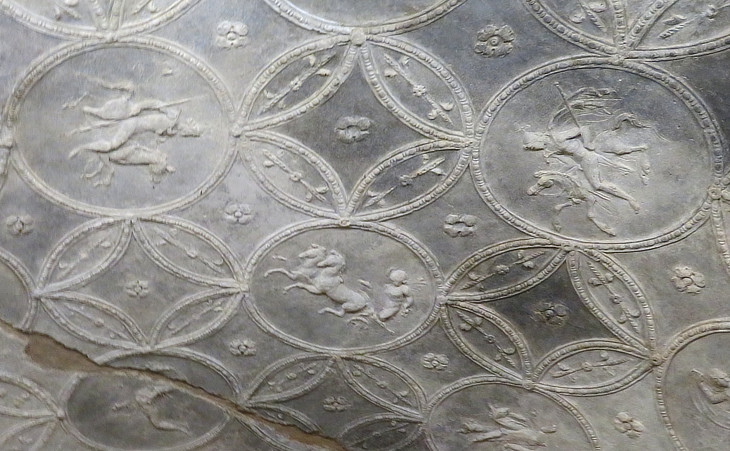 The tombs have small niches to house the urns containing the ashes of the dead, because cremation was the typical process for disposing of human corpses in Rome until it was replaced by inhumation in sarcophagi. Their elaborate decoration with portraits of the dead, flowers, birds and cupids, all rather small in size, was meant to represent the peace of the afterlife, in what appears to be a relaxed approach to death.
The souls of the dead were celebrated on Feralia, a public holiday on February 21st. In addition to this general commemoration, funerary rites were performed on the birthday of the dead and not on the anniversary of their death. In the case of tombs with so many cinerary urns as those shown above ceremonies were performed rather frequently and from what we know they were not particularly distressing. You may wish to see a page on Roman funerary rites. 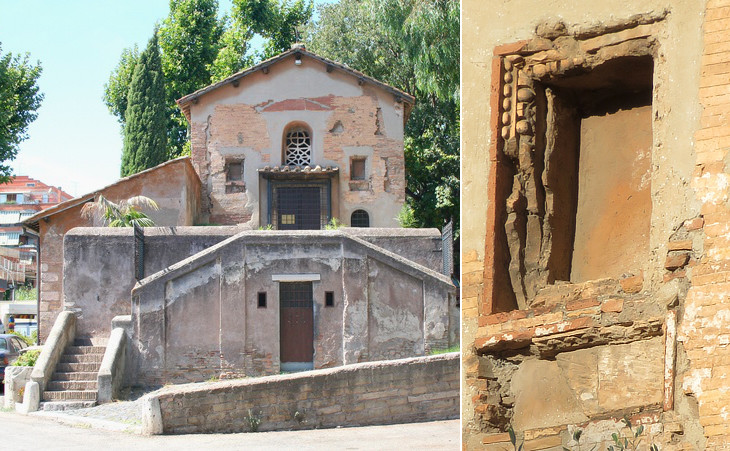 This small church celebrates the relocation of the relics of Sts. John and Cyrus of Alexandria from Egypt to Rome. Aboukir, the Egyptian town near the famous bay where in August 1798 Sir Horatio Nelson defeated the French fleet, is a corruption of Aba Cyrus (St. Cyrus) and it was the site of a shrine to this saint; after the Arab invasion the shrine fell into abandonment and the relics of the saint were brought to Rome. In the XVIIth century the relics were moved to a Jesuit church in Naples. Ciro is still a very popular first name in Naples. 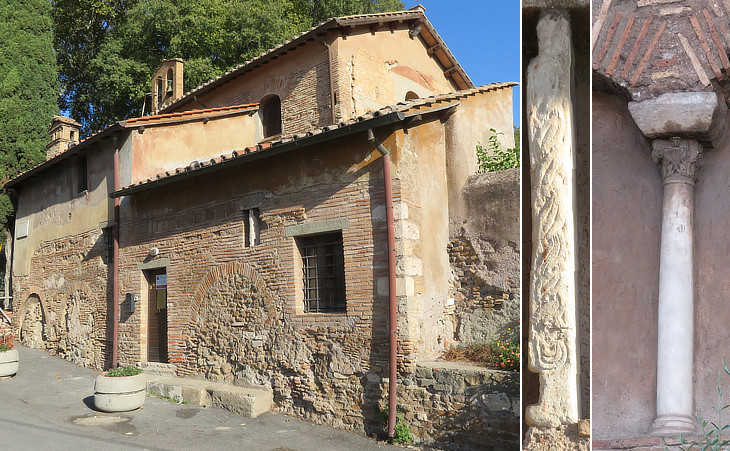 (left) Side view of the church showing the existence of a previous lower building; (right) travertine (white) and "cipollino" (greenish) stones

The church is located at a large turn of the River Tiber, opposite S. Paolo fuori le Mura and it served a small community of miners excavating the tufa quarries of the nearby hills. The current building was erected in the IXth century above a Roman tomb. The interior retains traces of medieval frescoes.
The reference to Passera is most likely a corruption of Aba Cyrus; the devout refrain from using this name because it has a slang second meaning. 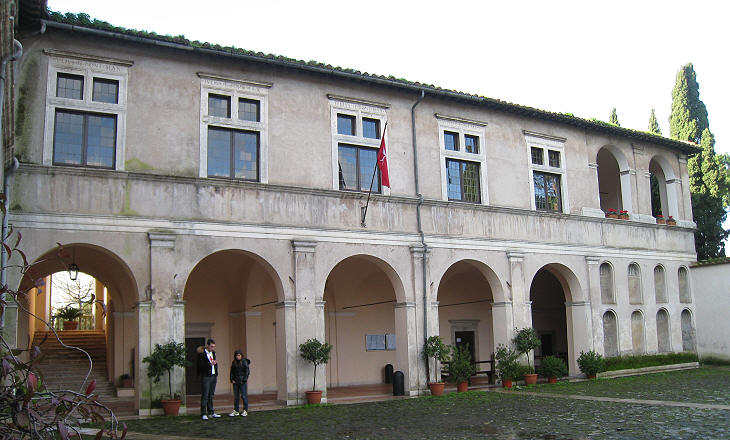 Hunting has always been a preferred pastime of the rich; Girolamo Riario, nephew of Pope Sixtus IV, enjoyed hunting and he turned a farmhouse five miles south of Porta Portese into a small hunting lodge; Pope Innocent VIII, Pope Julius II and Pope Leo X enlarged and embellished the building. In particular Pope Leo X enjoyed spending occasional sunny winter days at this lodge (the site was very unhealthy in summer). Pope Pius IV used to relax here before he built a casino in the Vatican. Because of its unprotected location the lodge was fortified and from the outside it has the appearance of a small castle. 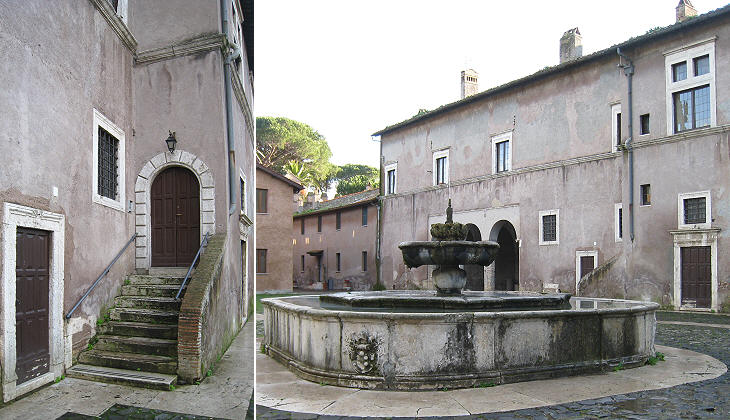 The Villa Magliana is a castellated building of somewhat striking aspect, with battlemented walls and a tower. The courtyard, adorned with a fountain, is entered through an imposing portal. (..) Leo X was fond of it, and it is said that his death was caused by a cold caught here. (..) This villa, once the luxurious retreat of popes, is fallen from its high estate, and is no more than a humble farm-house. Its spacious rooms were filled with grain and other agricultural produce. Men in the garb of common laborers were lounging about; the courtyard was littered with straw and filth; and barn-door fowls were pecking and scratching around the fountain.
George Stillman Hillard - Six Months in Italy in ca 1847-1848
While during the Renaissance no one objected to the fact that a pope spent his time hunting, in the following centuries this pastime was no longer regarded as appropriate for a pope and the lodge was abandoned. Today it is part of a hospital run by the Order of the Knights of Malta. 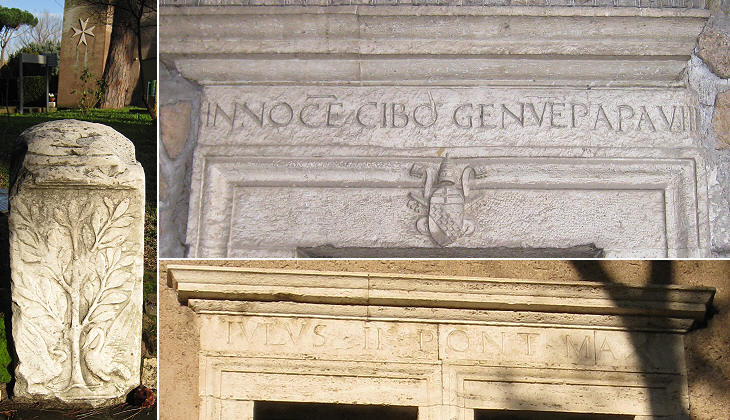 (left) Fragment of an ancient altar of the "Arvales", a college of twelve priests, and behind it the Malta Cross on the former stables (see a similar altar at Villa dei Volusii); (right) inscriptions celebrating Pope Innocent VIII (above) and Pope Julius II (below - misspelled)

Papa (Pope) means father and it is the title of the Bishop of Rome and Head of the Roman Catholic Church. This title was used in medieval inscriptions where in some instances it was written as "P.P." (Pater Patrum). During the Renaissance and afterwards the popes preferred to use a title (Pontifex Maximus - Pont. Max. or P.M.) which was part of the system of government of Ancient Rome. Pontifex Maximus was a magistrate in charge of presiding over the most important religious ceremonies; after Augustus it became a title given to the emperors who very often were portrayed in statues as Pontifex Maximus (you may wish to see a statue of Augustus as Pontifex Maximus).

The Walls from Porta Portese to Porta S. Pancrazio In 1641 Pope Urban VIII made an attempt to impose direct papal authority on the Duchy of Castro, a fiefdom of the Farnese within the borders of the Papal State. The Farnese, who were also Dukes of Parma, reacted to a decree imposing trade restrictions by strengthening the fortifications of Castro. In 1642 a papal army invaded and conquered Castro, but the Farnese retaliated by invading Romagna, the northern province of the Papal State, and by asking the Grand Duke of Tuscany and the Republic of Venice to form an alliance against the Pope. This threat led Pope Urban VIII to decide to protect Rome by building new walls around Trastevere. The walls were completed in just two years, but in the meantime the Pope had to sign a peace agreement and to return Castro to the Farnese.
The pontificate of Urban VIII lasted nearly 21 years and during this time the three bees of his coat of arms were placed in every corner of Rome, including these walls, as shown also in the image used as background for this page. 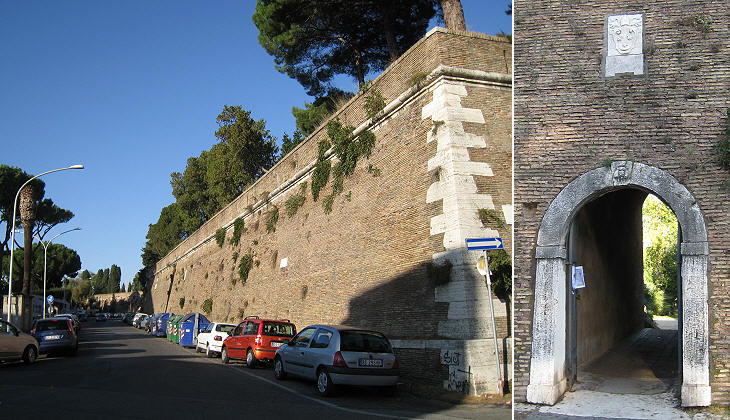 In 1849 the section of the walls near Porta S. Pancrazio was greatly damaged by the French when they had to overcome the resistance of Garibaldi who was commanding the defence of the Roman Republic.
The walls were rebuilt by Pope Pius IX.