S. Niccolò in Carcere
(Vasi at work in the Grand View of Rome)

Links to this page can be found in Book 6, Day 5, Map C3, View C9, Rione Campitelli and Rione Ripa. 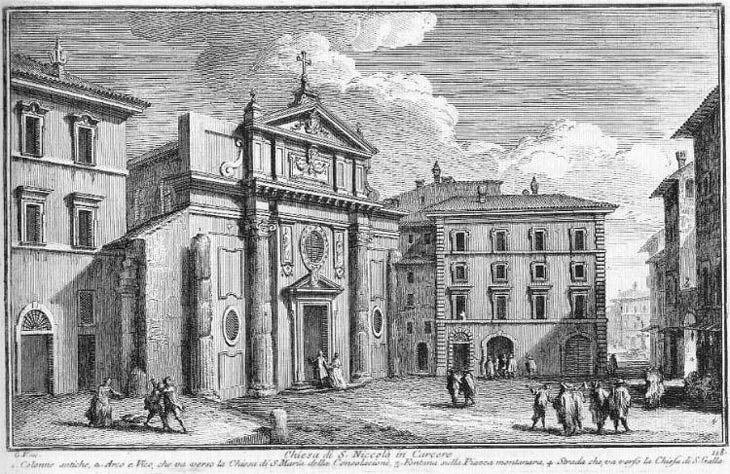 When Giuseppe Vasi developed the plan for his book on the parish churches of Rome in 1756 he was aware that the subject matter would not appeal too much to the travellers who bought his books to have a memento of their Roman stay. He therefore chose some churches which had a link with ancient Rome, similar to S. Nicola in Carcere which was built inside a temple, or were placed next to another monument (e.g. S. Maria in Trivio near Fontana di Trevi). Moreover in this etching he added a touch of local colour by sketching a melodramatic scene: two men fighting for a woman and one of them showing a knife (an enlargement of the scene can be seen in the image used as background for this page).
The view is taken from the green dot in the small 1748 map here below. In the description below the plate Vasi made reference to: 1) Ancient columns; 2) Street leading to S. Maria della Consolazione; 3) Fountain in Piazza Montanara; 4) Street leading to S. Galla. 3) is shown in detail in another page. The small map shows also: 5) S. Omobono; 6) S. Maria della Consolazione; 7) Ospedale della Consolazione. The dotted line in the small map delineates the borders among Rione Sant'Angelo (small area on the left), Rione Ripa (left lower quarter) and Rione Campitelli.

The net of small houses surrounding S. Nicola in Carcere was pulled down in 1926-930 in order to open Via del Mare. a large road linking the centre of Rome with its southern suburbs and eventually with Lido di Ostia, its modern beach. The church and nearby Palazzo Orsini/Teatro di Marcello were freed of many later additions. The bell tower was returned to its likely medieval aspect. It might have originally belonged to the Pierleoni who had other properties in the area. 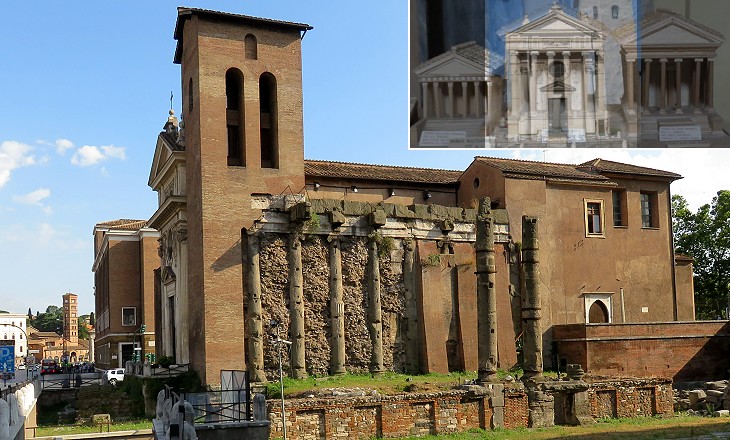 Western side of S. Nicola in Carcere and in the background (far left) S. Maria in Cosmedin; (inset) models of the three temples which were totally or in part incorporated into the church; they were dedicated to (left to right) Janus, Juno Sospita and Spes (Fortune)

This part of ancient Rome was a very busy one because it housed Foro Boario (cattle market) and Foro Olitorio (fodder market). The three temples however were not built by tradesmen, but by order of the consuls during the Punic Wars. Their maintenance however might have been entrusted to guilds of those who worked in the two markets. A large arch in this neighbourhood was dedicated to Janus and Juno Sospita (she who favours) was worshipped at a shrine near Lanuvium. 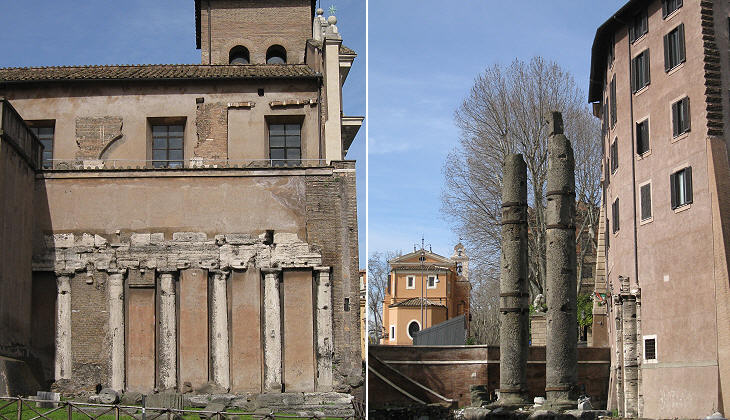 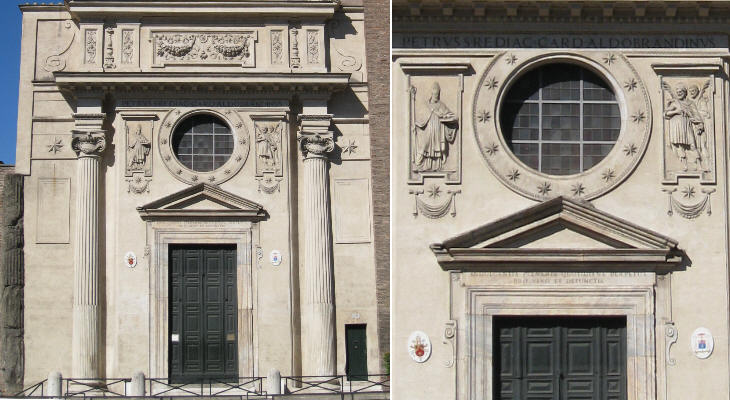 Details of the façade

The original church is thought to have been built in the VIIth century when Rome was part of the Byzantine Empire; this would explain its dedication to St. Nicholas, Bishop of Myra, one of the most important Greek saints. The church was rebuilt in the early XIIth century.
The reference to a prison (in carcere) is probably linked to a Byzantine jail which existed in the vicinity.
In 1599 Cardinal Pietro Aldobrandini, nephew of Pope Clement VIII, restored the church; the new façade was designed by Giacomo Della Porta; the many stars which decorate the façade are a heraldic symbol of the Aldobrandini. You may wish to see how it appeared in a 1588 Guide to Rome. 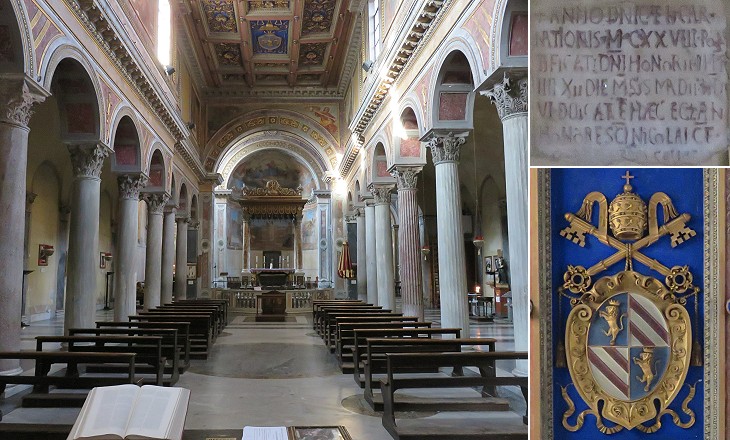 (left) Interior: (right-above) inscription indicating that the church was reconsecrated in 1128; (right-below) detail of the ceiling showing the coat of arms of Pope Pius IX

In 1865 the interior of the church was largely redecorated and repainted at the request of Pope Pius IX. In general XIXth century redesigns did not add much to the artistic value of a Roman church. At S. Nicola in Carcere however architect Gaspare Servi managed to draw the visitor's attention to the beautiful ancient columns of the central nave. They did not come from the temple to Juno Sospita, but were taken from other buildings. 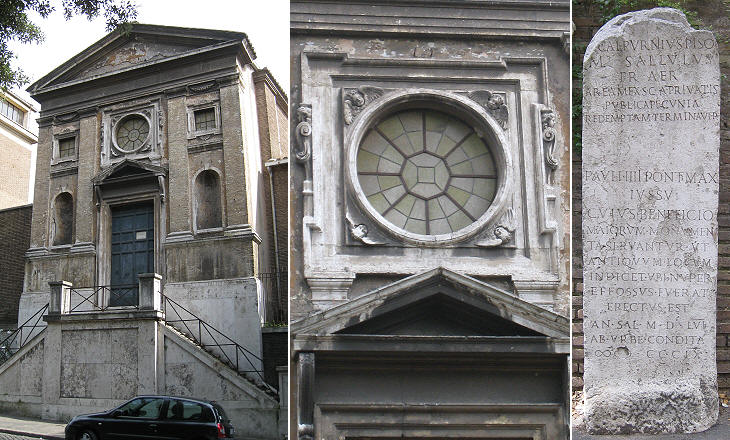 (left) Façade; (centre) detail of the façade; (right) inscription opposite the church

Originally the church was used as a chapel by one of the three hospitals which were merged into Ospedale della Consolazione and it was called S. Salvatore in Portico; in 1575 it was acquired by the guild of the tailors; it was almost entirely rebuilt and it was dedicated to St. Homobonus, a XIIth century merchant from Cremona who donated his properties to the poor and who worked as a tailor to comply with To Clothe the Naked, the third Work of Mercy according to the Roman Catholic Church. You may wish to see a directory of churches belonging to a guild.
An upright ancient marble slab opposite the church is interesting for its two inscriptions: the upper one was written by two praetores aerarii, Roman magistrates who were in charge of the public treasury which was located in nearby Tempio di Saturno, along the same ancient street (Vicus Iugarius). It states that the area is public property and it is dated late Ist century BC. The lower inscription was added in 1556 (2309 after the foundation of Rome) and it celebrates Pope Paul IV as preserver of the ancient monuments. 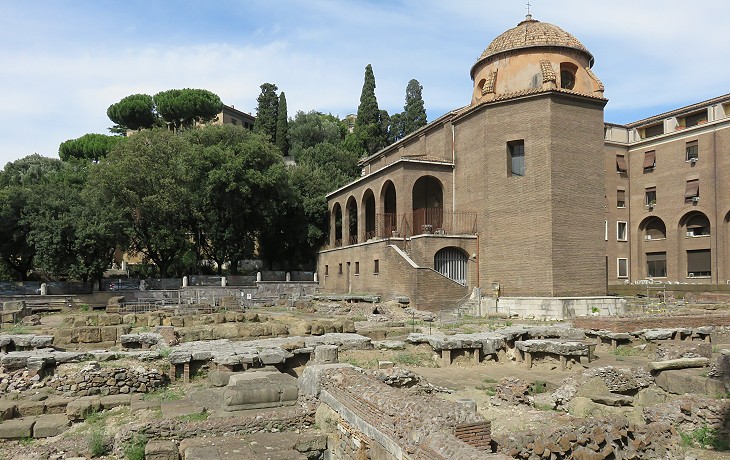 The archeological area around the small church was identified in the 1930s and many interesting remains of the very early days of Rome were found. Today's level of the ground is higher than that at the time of Ancient Rome, but it is lower than that at Vasi's time. The area is very near the river and it was often flooded before the 1880s. 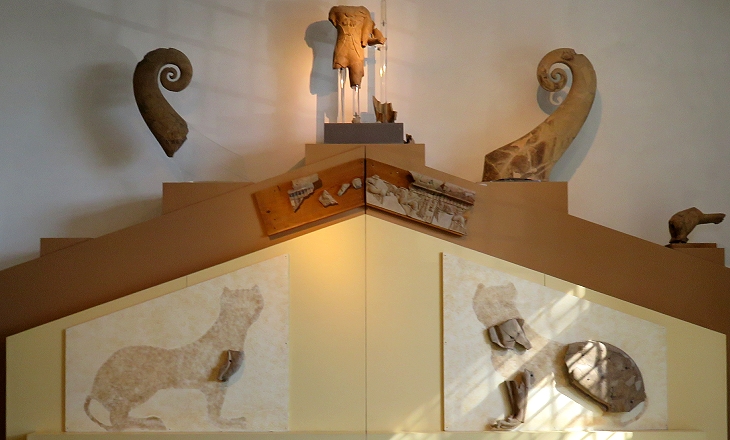 Musei Capitolini: partial reconstruction of a VIth century BC temple to Mater Matuta

The platform upon which a very ancient temple stood was identified under the foundation of S. Omobono. The walls were made of raw bricks and the rest of the building was made of timber. It was decorated with terracotta reliefs and statues which gave it the aspect of a Greek temple. It is not far from Vicus Tuscus, where many Etruscans lived. The Etruscans used terracotta instead of marble for the decoration of their temples and for their sarcophagi (see a detail of a temple at Veii and the Sarcophagus of the Spouses - they are both at Museo Nazionale Etrusco di Villa Giulia and they open in another window). 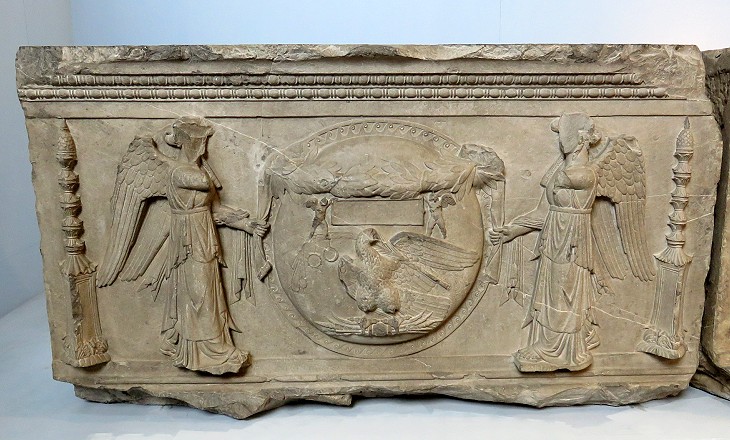 Centrale Montemartini: Relief from the monument donated to Rome by Bocchus I, King of Mauretania

Bocchus I was the king of Mauretania (today's western Algeria) who betrayed his son-in-law Jugurtha, King of Numidia (today's eastern Algeria/western Tunisia) and delivered him to the Romans. In return he was given the western part of Numidia. In order to show his loyalty to Rome, and in particular to Silla, in 91 BC he sent to Rome (or ordered to be built) a monument celebrating his delivery of Jugurtha. Fragments of the base of the monument were found near S. Omobono, but the original location of the monument must have been on the Capitoline Hill, together with other gifts made to Rome by allied cities/countries. 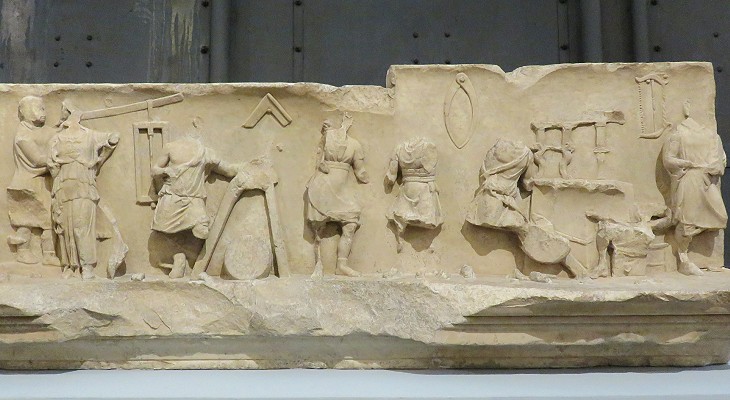 Guilds played a major role in the organization of economic activities in ancient Rome. All those who earned their living from their work (manual, entrepreneurial or professional) had to join a recognized guild. A temple/meeting hall of the Fabri Tignarii has been found at Ostia. The relief shown above indicates that they had an office also in Rome. It was situated on the Capitoline Hill because they were in charge of the maintenance of its temples. As a matter of fact during the XVIth century the carpenters' guild was assigned a space at Palazzo dei Conservatori, very near the likely location of the ancient office. 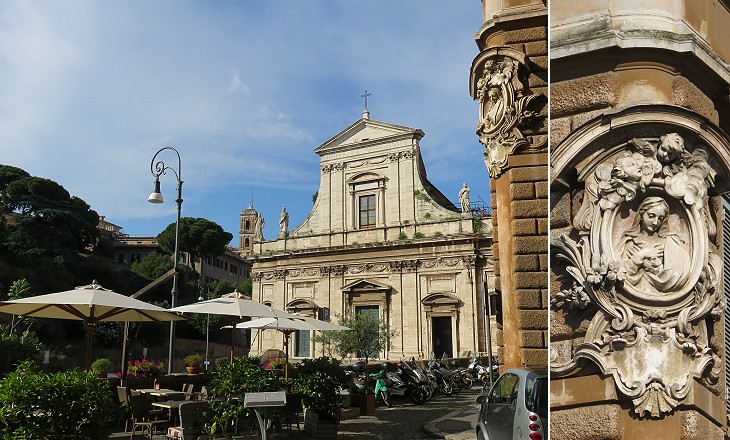 (left) View with the bell tower of Campidoglio in the background; (right) XVIIIth century "madonnella"

This church, similar to many other Roman churches, is associated with a miraculous image of the Virgin Mary; it was painted to comply with the will of a criminal who was hanged in 1385 at Rupe Tarpea which stands to the left of the church; the image was placed on a wall facing the execution site; almost a century later an innocent man who was being hanged in the same spot was supported by an invisible hand after he prayed to the image. A small chapel was built to house the painting which became known as Madonna della Consolazione; in 1600 a church designed by Martino Longhi the Elder replaced the chapel. 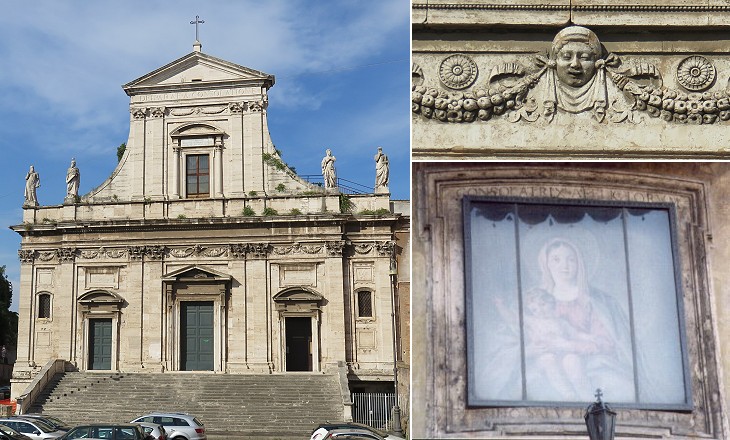 (left) Façade; (right) sacred image by Niccolò Berrettoni on the apse of the church; it was painted to celebrate the end of the 1656-657 plague

Some minor guilds contributed to financing the construction of the church and in return they were assigned a chapel. The upper part of the façade was completed in 1827. Originally S. Maria della Consolazione stood on just three steps, but because the level of the square was lowered in the 1930s, sixteen steps are now required to reach its entrance. You may wish to see how it appeared in a 1588 Guide to Rome. 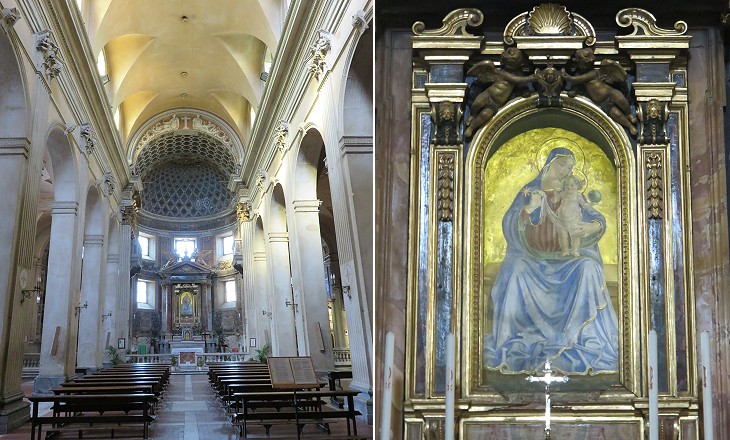 (left) Interior; (right) sacred image on the main altar which was repainted by Antoniazzo Romano in the second half of the XVth century

Apparently the interior gives the impression of having been designed from scratch, but some of the chapels already existed and were lavishly decorated. This might explain the relatively large size of the church, especially its width (which is more noticeable by looking at the façade). 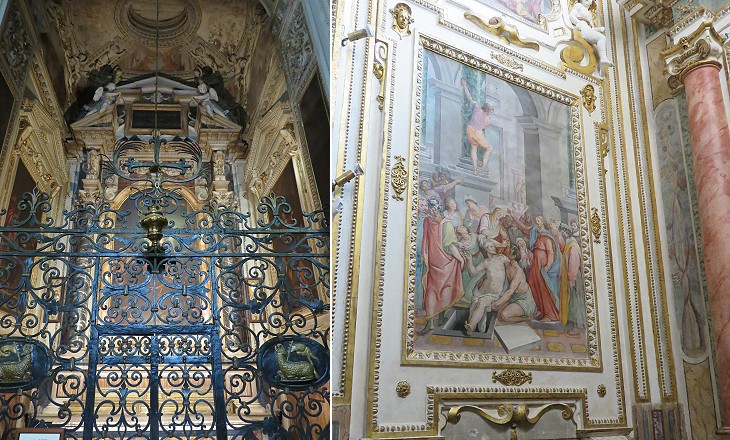 When considering the large number of Roman churches or chapels built by guilds, one must take into account that it was a social, if not legal, obligation for the members of the guild to have a place of worship. Some guilds were very rich, those which had a chapel at S. Maria della Consolazione not so much and yet this is not perceptible from the decoration of their chapels.
The Affidati were owners of sheep or cattle who had the right to pasture their animals on public ground (the contract they signed was known as fida).
In some instances guilds joined forces to build and maintain a chapel: the Vignaroli cultivated a vineyard for a proprietor and received part of the produce. The Cavatori di Pozzolana searched for pozzolana, a volcanic stone used to make mortar. They often pulled down ancient buildings to reuse their mortar or excavated tombs. 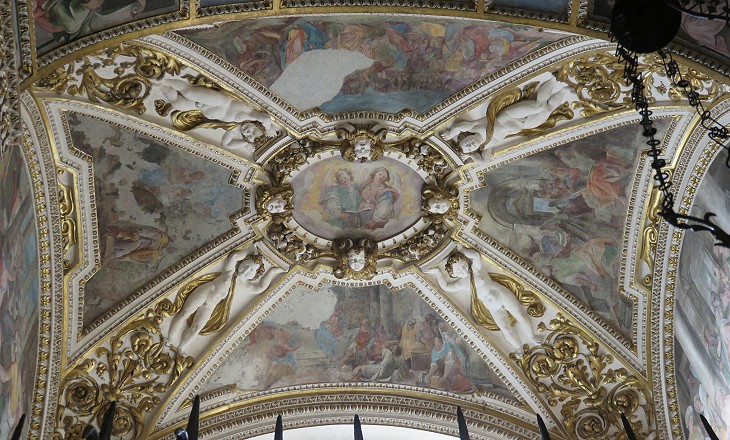 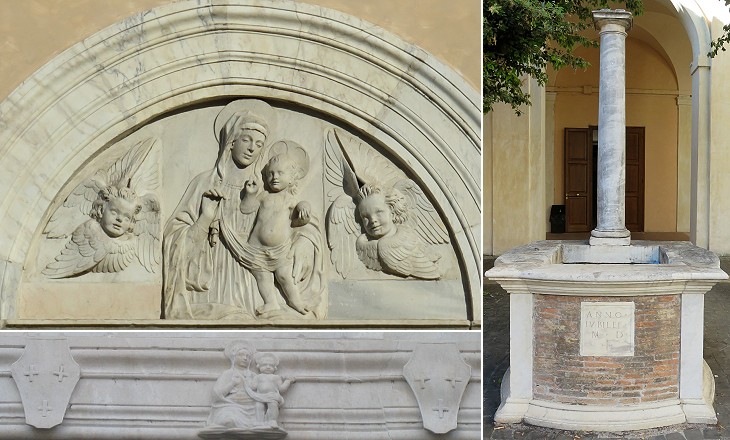 (left) Reliefs on two entrances; (right) 1500 well in the courtyard

Ospedale della Consolazione was founded at the beginning of the XVIth century by uniting three small existing hospitals. It was modified and enlarged several times, but it gradually lost importance and in 1936 it was closed. Eventually most of the wards were demolished, but the oldest part of the hospital with two nice Renaissance portals was spared. The building is now used for other purposes. The coat of arms with three crosses is a reference to the original hospitals.