Chiesa di S. Eustachio
(Vasi at work in the Grand View of Rome)

Links to this page can be found in Book 6, Day 4, View C6 and Rione Sant'Eustachio. 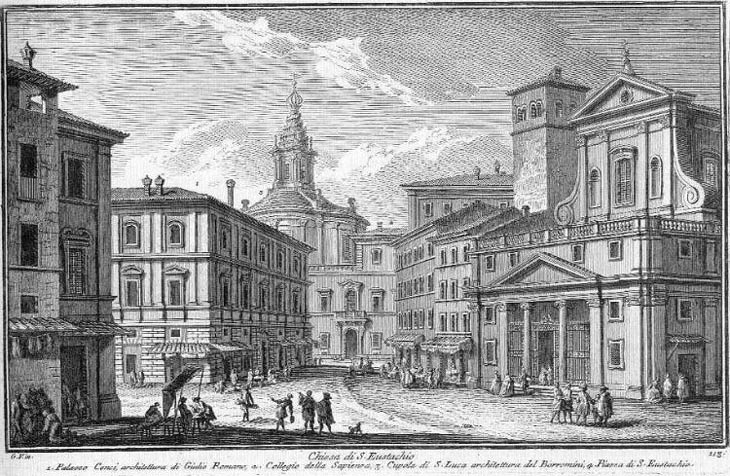 In this 1756 etching covering the parish church of S. Eustachio, Giuseppe Vasi chose a point of view which allowed him to depict the Dome of S. Ivo alla Sapienza, one of the most amazing monuments of Baroque Rome (you may wish to see a page on art historians' views about this work by Francesco Borromini). The church was inside the courtyard of Archiginnasio della Sapienza and it was not visible from the front of the building which Vasi depicted in a later etching.
The view is taken from the green dot in the small 1748 map here below. In the description below the plate Vasi made reference to: 1) Palazzo Cenci; 2) Archiginnasio della Sapienza; 3) Dome of S. Ivo alla Sapienza (the church was dedicated also to St. Luke); 4) Piazza S. Eustachio. 2) and 3) are shown also in other pages. The small map shows also: 5) Palazzo Tizio di Spoleto; 6) S. Eustachio; 7) Palazzo Medici Lante. 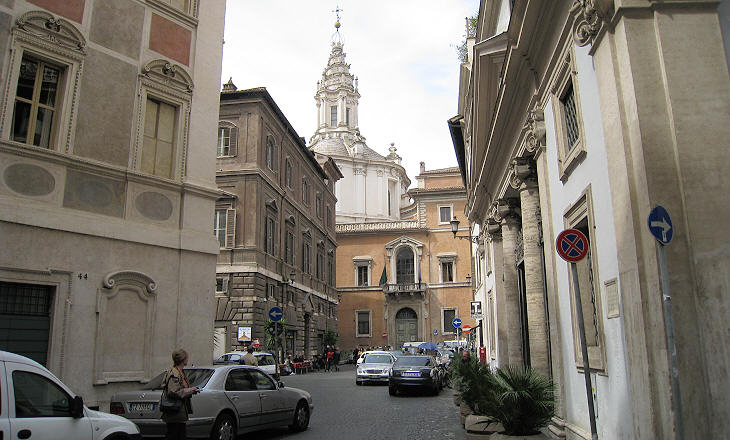 The area is untouched since Vasi's time, apart from a number of service cars for the members of the Italian Senate who meet at nearby Palazzo Madama and have ancillary facilities at Palazzo Cenci Maccarani. As usual Vasi enlarged the street in order to show the façade and the bell tower of S. Eustachio. 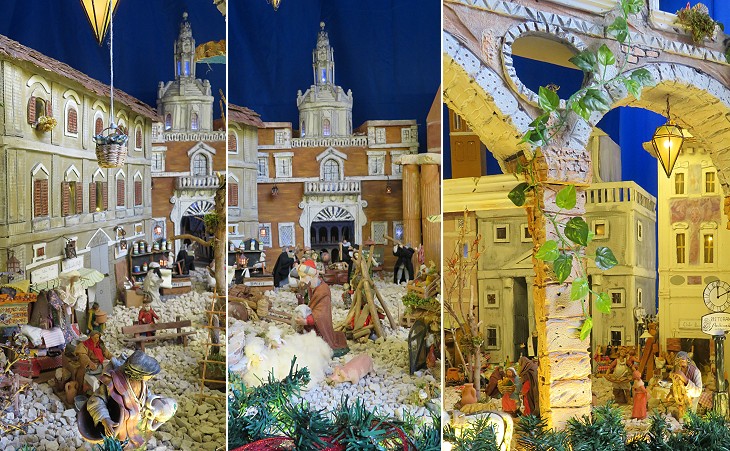 2018 crib at S. Eustachio showing the monuments covered in this page and two ancient columns in nearby Piazza de' Crescenzi. You may wish to see a page showing other cribs (left) Overall view; (centre) bell tower; (right-above) stag by Paolo Morelli which was criticized because it resembled a donkey; (right-below) capital of the portico

This Church stands in the place where St. Eustachius with his Wife Theopista, and his Sons Agapitus and Theopistus, were put into a Brazen Bull and martyred by the brazen Heart of Trajan, whom Eustachius had served twice as General of his Armies, and gained him as many Victories.
Richard Lassels' The Voyage of Italy, or a Compleat Journey through Italy in ca 1668
The stag is a reference to an event associated with the conversion of St. Eustace (see below); the account of his martyrdom which echoes a story about a bronze sculpture mentioned by Diodorus Siculus is now regarded by the Roman Catholic Church as a legend. The Romanesque bell tower is dated XIIth century while the church was almost totally rebuilt between 1701 and 1730 mainly on the basis of a project by Giovan Battista Contini. 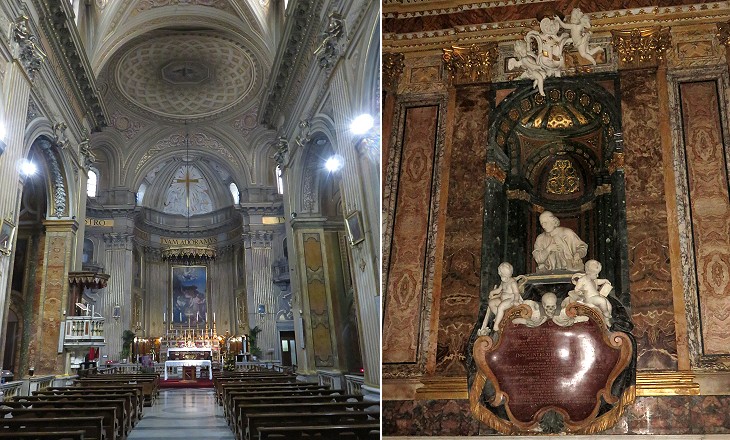 (left) Interior; (right) Monument to Silvio Cavalieri, Archbishop of Athens (d. 1717) designed by Alessandro Speroni with a statue by Lorenzo Ottoni (you may wish to see other funerary monuments which portray the dead in the act of praying, some of which had statues by Ottoni)

S. Eustachio gives its name to the rione (neighbourhood); it was a titular see, but it was reserved to the deacons, the lowest-ranking cardinals. The large majority of them were subsequently promoted to more important titular churches and this explains why S. Eustachio does not house imposing monuments of cardinals.
Mons. Silvio Cavalieri was personal secretary to Popes Innocent XII and Clement XI. His good services were rewarded by his appointment as Archbishop of Athens in partibus infidelium, i.e. in territories ruled by the infidels. It was a merely honorary title which gave Cavalieri a status in the religious hierarchy without the burden of actually ruling a diocese. 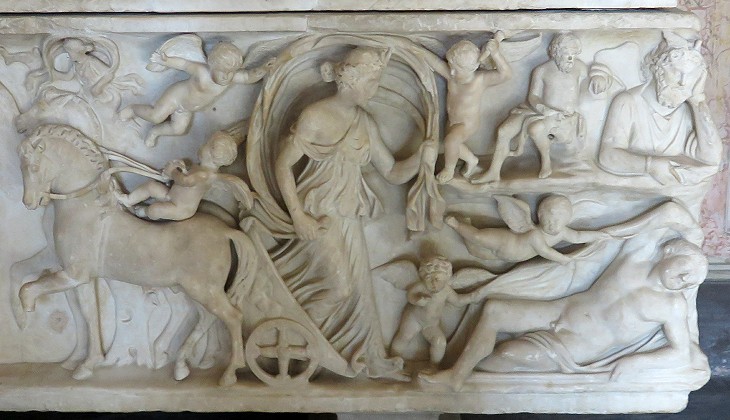 Musei Capitolini: detail of a sarcophagus found in 1703 at S. Eustachio (it was part of the Albani Collection). It shows Selene and Endymion, similar to a sarcophagus of the Pamphilj Collection

Endymion was lying asleep in a cave one still night when Selene first saw him, lay down by his side, and gently kissed his closed eyes. Afterwards he fell into a dreamless sleep, because Selene found that she preferred gently kissing him to being the object of his too fertile passion. He has never grown a day older, and preserves the bloom of youth on his cheeks. From Robert Graves - The Greek Myths. 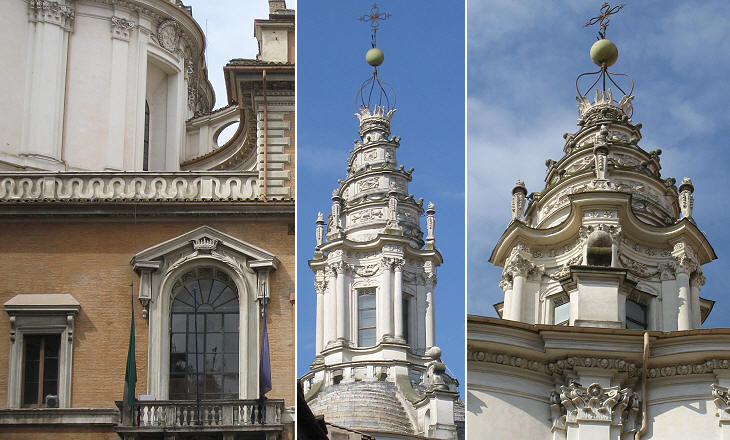 (left) Detail of the rear façade, a decorative element of which can be seen in the image used as background for this page; (centre/right) lantern of S. Ivo

Archiginnasio della Sapienza (Wisdom) was founded in the XVth century and the front of the building was completed by Giacomo Della Porta for Pope Sixtus V. Francesco Borromini designed the side shown in this plate and built the church in the courtyard during the pontificate of Pope Urban VIII and his successors. The design of the lantern was meant to represent the path to achieve supreme wisdom; the flaming crown is a symbol of divine charity.

Detail of the rear portal with reliefs making reference to Justice (scales and book) (left), Fame (wings and wreath) (centre) and Prudence (remora a snake-like fish and mirror) (right) 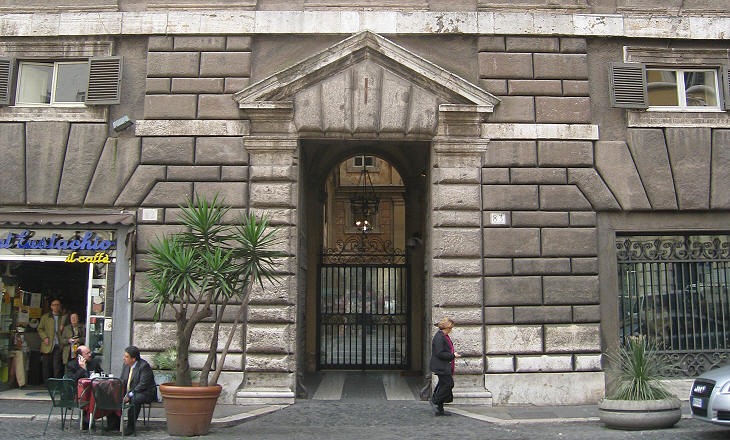 This palace has four names: Stati, Cenci, Maccarani, di Brazzà. Cristoforo Stati commissioned the building to Giulio Romano, an architect and painter who started his career as an assistant to Raphael. The design of the palace is characterized by the use of jack arches (It. piattabanda). A jack arch is an "arch" which is flat in profile, but has the advantage of discharging strength as a regular arch through the use of wedge shaped stones.
In 1561 the palace was bought by the Cenci who passed it to the Maccarani, a branch of the family, at the end of the XVIIIth century. It was eventually acquired by the Savorgnan di Brazzà. 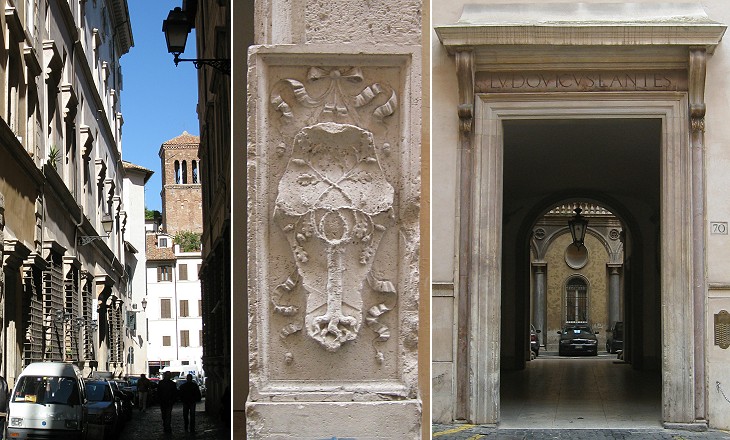 Next to Palazzo Cenci, Palazzo Lante is attributed to Giuliano da Sangallo. A Lante married the last heir of the Della Rovere, the family of Pope Julius II. He was allowed to add to his surname that of his wife and to make use of her coat of arms. The Lante are best known for their villas on the Janiculum and at Bagnaia. 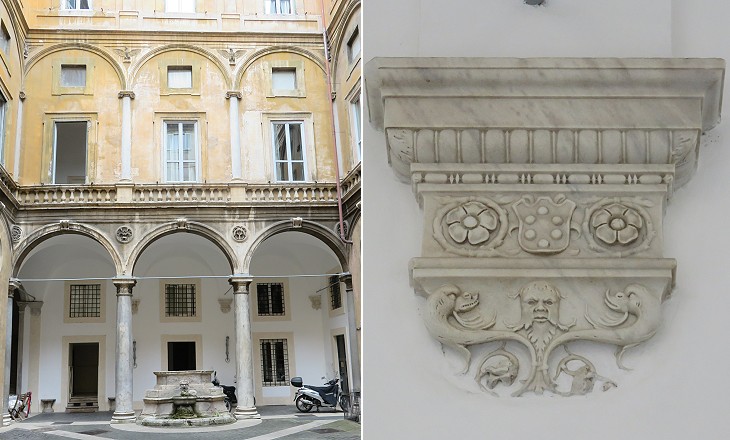 The palace was initially built by Alfonsina Orsini who was sister-in-law of Pope Leo X having married Piero de' Medici, brother of the Pope. Family bonds between the Medici and the Orsini were first established in 1469 when Lorenzo de' Medici married Clarice Orsini. They were the parents of the Pope. 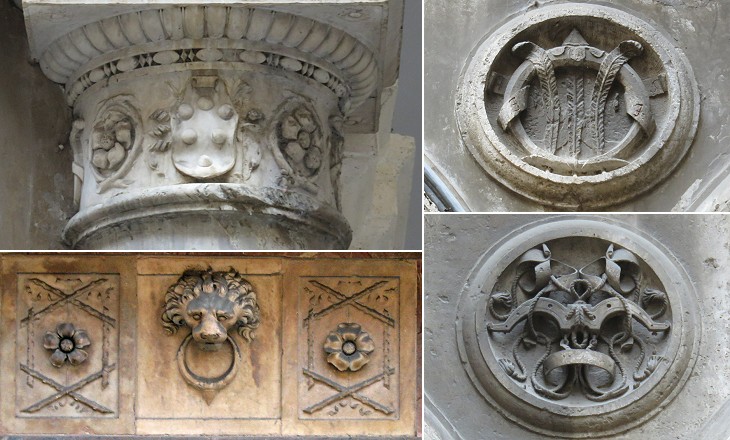 (left) Other Medici and Orsini heraldic symbols; (right) less known Medici symbols which can be seen also at S. Maria in Dominica, titular church of Pope Leo X when he was a cardinal 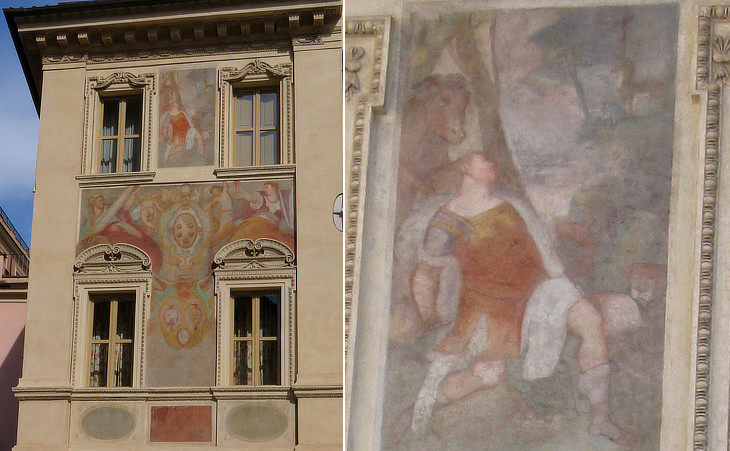 The plate shows on the left an elegant small building which was decorated with frescoes by Federico Zuccari who often worked with his elder brother Taddeo, e.g. at the decoration of Palazzo Farnese di Caprarola. The façade on the piazza shows the coat of arms of Pope Pius IV between two Virtues (this part is shown in the historical section) and between the windows of the top floor the miracle of St. Eustace; he was a Roman soldier who was hunting a stag, but refrained from killing it when he saw a cross on its head. According to tradition the event occurred at Rupe di Guadagnolo. Renaissance palaces were very often painted (see also Casa di Alessandro Lancia, Palazzo Ricci and Palazzi di Via della Maschera d'Oro).

Palazzo di Tizio da Spoleto: details of a window (left) and of the cornice (right)

Tizio da Spoleto was house-steward of Cardinal Alessandro Farnese and this explains the presence of fleurs-de-lis (the Farnese heraldic symbol) in the very elaborate decoration of the building.

Next plate in Book 6: S. Lucia alle Botteghe Oscure.
Next step in Day 4 itinerary: S. Maria in Monterone.
Next step in your tour of Rione Sant'Eustachio: Piazza Crescenzi.