Links to this page can be found in Book 6 and Day 2. 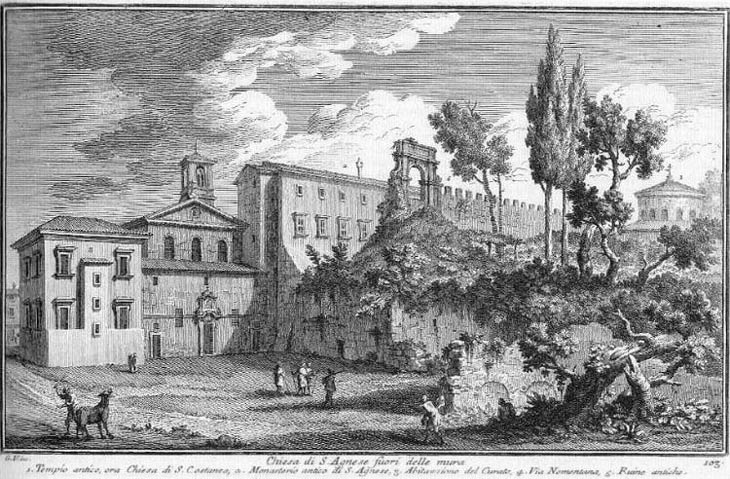 S. Agnese fuori delle Mura is one of the most ancient churches of Rome and it is dedicated to a very popular Roman martyr, yet Giuseppe Vasi did not include it in his 1753 book of etchings covering the most important churches of the Eternal City; this because S. Agnese was located not only outside the walls of the city, but also along Via Nomentana, a very minor road, while other ancient basilicas outside the walls such as S. Paolo, S. Sebastiano and S. Lorenzo were situated along important roads and were included in the pious itineraries which were recommended to pilgrims. The neighbourhood where the church was located had been scarcely populated for centuries, but at the beginning of the XVIIIth century the situation changed slightly and Pope Clement XI turned S. Agnese into a parish church; thus Vasi could show it in his 1756 book covering the parish churches.
In the description below the plate Vasi made reference to: 1) old temple now S. Costanza; 2) Monastero di S. Agnese; 3) house of the parish priest; 4) Via Nomentana; 5) ancient walls. The small 1883 map shows: 1) S. Costanza; 2) S. Agnese; 3) Via Nomentana; 4) Porta Pia; 5) Villa Torlonia. 4) and 5) are covered in other pages. 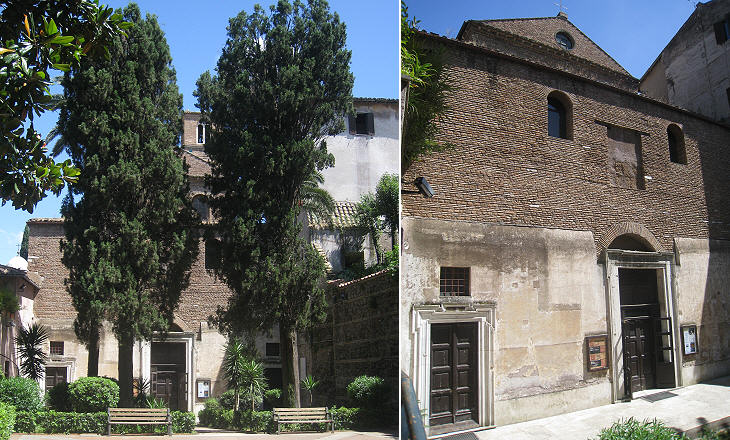 The façade of S. Agnese did not receive a lot of attention during the Renaissance and Baroque periods because in 1527 a broad staircase was built which leads directly to the interior of the church from the entrance to the monastery in Via Nomentana. A few minor additions to the façade were removed in the XXth century to restore its VIIth century appearance and cypresses were planted in the small garden in front of it.
Vasi showed also S. Costanza in his etching, but the building is located a hundred yards from S. Agnese and is hidden by a small mound. (left) Interior; (right) detail of the apse mosaic portraying Pope Honorius I presenting the basilica (you may wish to see a page on the mosaics in the churches of Rome)

According to tradition S. Agnese was built by Emperor Constantine at the request of his daughter Costanza on the site where St. Agnes was buried. The church was entirely rebuilt by Pope Honorius I in 625-638. Together with the oldest part of S. Lorenzo fuori le Mura, it is the only ancient church of Rome which retains a matroneum, a gallery from which women attended ceremonies. The columns of the nave and of the matroneum are of different height and stone and were taken from ancient buildings. 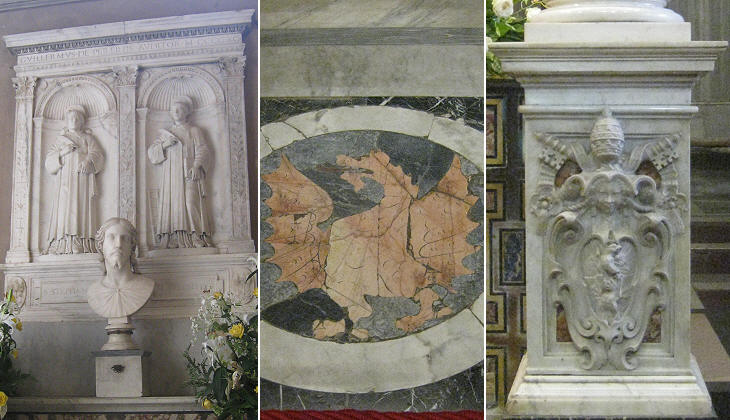 (left) Bust of Jesus most likely by Nicolas Cordier (previously attributed to Michelangelo) and relief portraying Sts. Stephen and Lawrence (school of Andrea Bregno); (centre/right) heraldic symbol and coat of arms of Pope Paul V on the main altar

According to tradition Agnes of Rome was put to death during the persecution of Emperor Diocletian because she refused to marry; for this reason she is the patron saint of chastity and of virgins; another church dedicated to her was built on the site of her martyrdom (today's Piazza Navona).
Nicolas Cordier was a talented sculptor (see his monument to Silvestro Aldobrandini) and also an excellent "restorer" of ancient statues which he turned into Renaissance masterpieces. 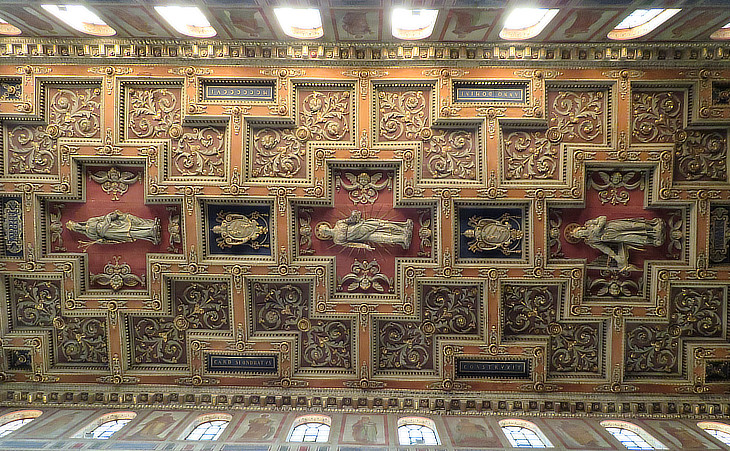 1606 wooden ceiling built by Cardinal Paolo Emilio Sfondrati which is similar to those of S. Maria in Aracoeli and S. Sebastiano

Pope Paul V built a new altar beneath which he placed the remains of the saint in a silver shrine; after performing the solemn function on January 21, 1621, he fell gravely ill and he passed away a few days later.
Agnes is similar to agnus, the Latin word for lamb, and the saint is usually portrayed with a lamb in her arms or at her feet (see the image used as background for this page which is based on a painting inside the church). On January 21, the saint's feast, two lambs are blessed; their wool is woven to make the pallium, a vestment worn by the pope. 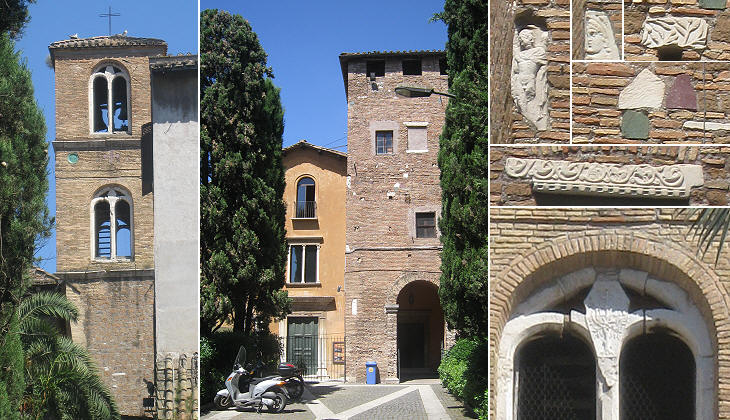 (left) Bell tower; (centre) medieval tower at the entrance to the monastery; (right-above) ancient fragments on the wall of the tower; (right-below) coat of arms of Cardinal Giuliano Della Rovere

For a long time the church belonged to a convent of nuns, but Pope Sixtus IV assigned it to the Canons Regular of S. Giovanni in Laterano; Cardinal Giuliano Della Rovere, a nephew of the Pope who became Pope Julius II in 1503, restored the church and the monastery extensively. 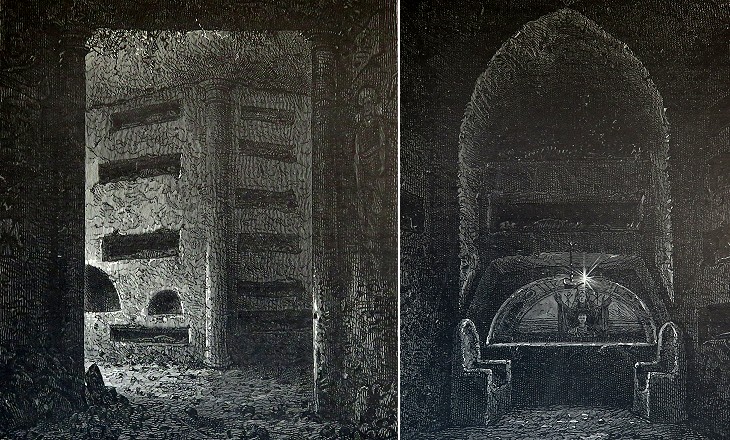 We enter by a staircase attributed to the time of Constantine. The passages are lined with the usual loculi for the dead, sometimes adapted for a single body, sometimes for two laid together. (..) A flight of steps leads down to what James Spencer Northcote calls "the Lady Chapel", where, over the altar, is a fresco of a woman in prayer, without a nimbus, with outstretched arms, with a child in front of her. (..) The graves throughout almost all the catacombs have been rifled, the bones which they contained being distributed as relics throughout Roman Catholic Christendom, and most of the sarcophagi and inscriptions removed to the Lateran and other museums.
Augustus J. C. Hare - Walks in Rome - 1875

Musei Vaticani: fragment of a sarcophagus from the cemetery of S. Agnese

An early Christian cemetery and a catacomb were situated near S. Agnese. Their frescoes and reliefs depict episodes of both the Old and the New Testament. The sarcophagus shown above portrays (left) Jesus handing over the New Law to St. Peter and St. Paul and (right) Daniel in the lions' den. The first relief had the specific purpose of highlighting the importance of St. Peter, the first Bishop of Rome. You may wish to see another very similar sarcophagus which was found at S. Paolo fuori le Mura. 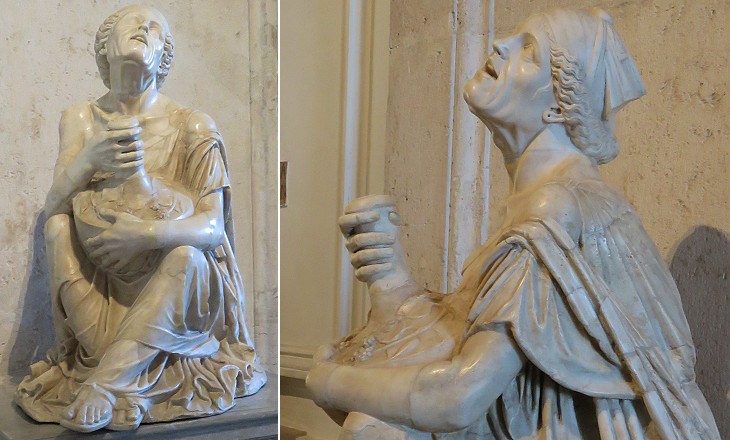 Musei Capitolini: "The Old Drunkard"; it was found in 1620 near S. Agnese. It is a Roman copy from a lost original of the IIIrd century BC

This statue was thought to portray a drunken priestess of Bacchus, but eventually it was associated with Anus Ebria (Drunken Crone) one of 52 famous statues outside Rome which were listed by Pliny the Elder in his Historia Naturalis. It might portray a character of a comedy by Aristophanes e.g. Ecclesiazusae (A Parliament of Women) in which three crones play minor roles. 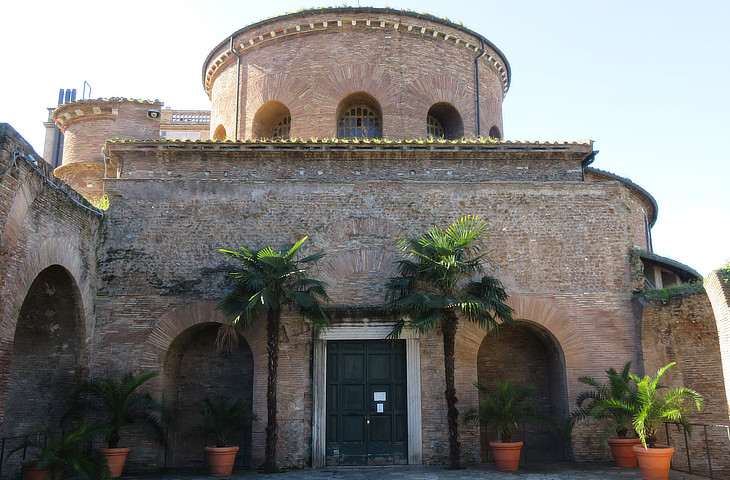 Front view with evidence of a niche of a lost narthex

The Church Saint Costanza, is a long mile out of the gate Pia and was of old dedicated to Bacchus, where is a most faire sepulcher and large, of porphry, ten ordinary spannes deepe, and fifteene long, curiously engraven with boyes quaffing, and bearing cups of wine, as in a Feast of Bacchus, which some thinke to be the sepulcher of Constantia a Virgine, daughter to Constantine, but the engraving like a Feast of Bacchus seemes more ancient, and to be wrought by the Heathen Romans, and it is vulgarly called the sepulcher of Bacchus. This Church is of a round forme and little, but very faire, and borne up with twelve rowes of marble pillars, set in a round compasse.
Fynes Moryson - An Itinerary: Containing His Ten Years Travel Through .. Italy (in 1594).
Read Francis Mortoft's account of his visit to S. Costanza in 1659. 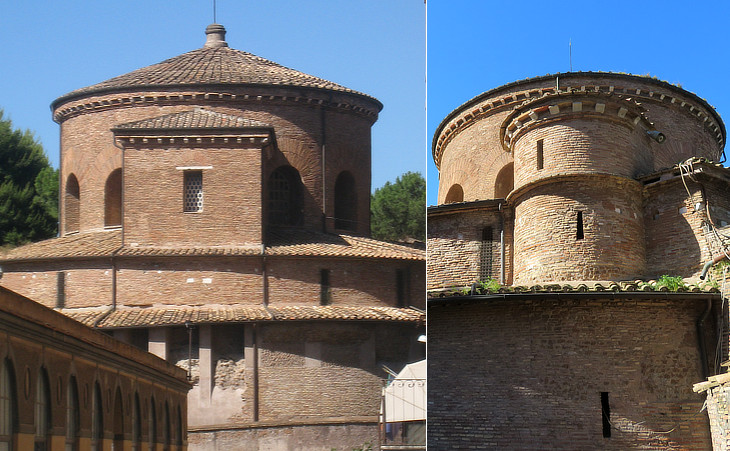 (left) Rear view: (right) side view showing a round staircase

According to the prevailing opinion at Vasi's time the mausoleum of Costanza (or Costantina), daughter of Emperor Constantine, was a Temple to Bacchus which had been adapted to house the sarcophagus of Costanza; this view was based on the mosaic decoration of the building which showed scenes of putti playing with clusters of grape, a very popular subject also in sarcophagi, floor mosaics and vases. These scenes however could also be consistent with symbols adopted by the early Christians (you may wish to see a sarcophagus found near S. Urbano alla Caffarella); in addition the circular shape of the building is typical of Roman mausoleums and similar to that housing the sarcophagus of St. Helena, Costanza's grandmother. 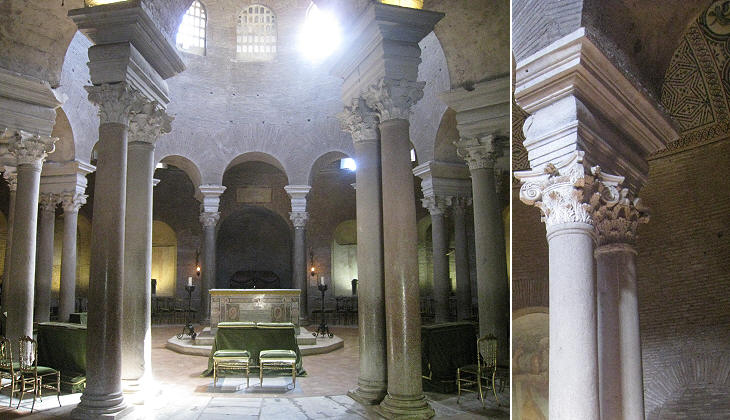 Costanza was cured of leprosy after having prayed at the tomb of St. Agnes and she decided not to marry; the mausoleum was turned into a church in the XIIIth century; Costanza is not a recognized saint. Notwithstanding the original purpose of the building (a copy of the sarcophagus stands behind the altar), S. Costanza is regarded as an excellent location for weddings, probably because relatives and guests have a better view of the ceremony than in a traditional church. You may wish to see the interior of S. Stafano Rotondo, another ancient round church of Rome. 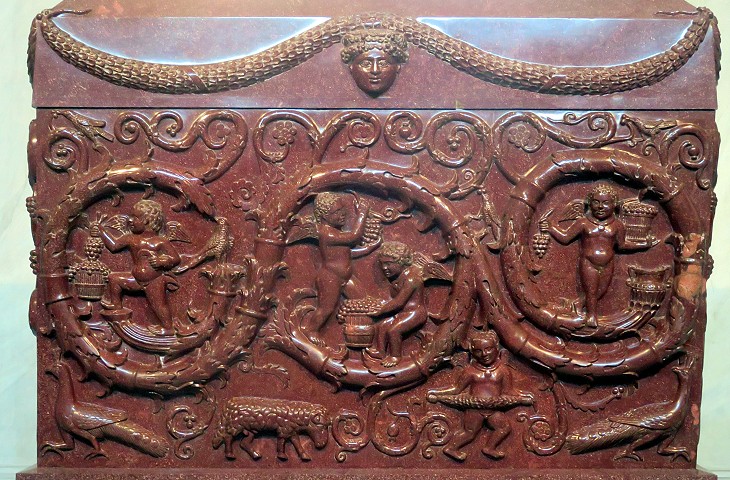 Sarcophagus of Costanza (at Museo Pio-Clementino)

Because of the references to the grape harvest in the sarcophagus and in the mosaics, the Bentvueghels (birds of a feather), i.e. the Flemish artists living in Rome, used to meet at inns near S. Costanza where they showed their devotion to Bacchus. You may wish to see a drawing by Pieter Van Laer showing Bentvueghels in a Roman tavern (it opens in another window) and their yearly gathering at Ninfeo di Egeria.
They did not join Accademia di S. Luca, the guild of the Roman artists. Their association was dissolved by Papal authorities in 1720, but the yearly gatherings of the foreign artists continued until ca 1870.
You may wish to see ancient porphyry sarcophagi at Constantinople and medieval ones at Palermo. 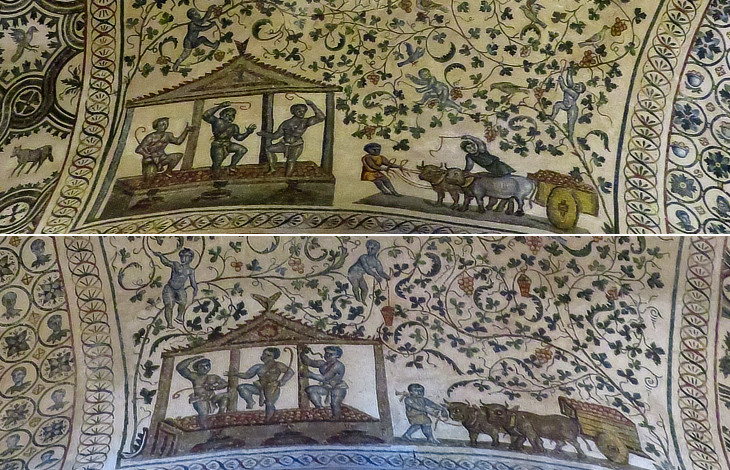 Grape harvest was a very popular subject for pagan floor mosaics: very fine examples can be seen in Tunisia and Algeria. 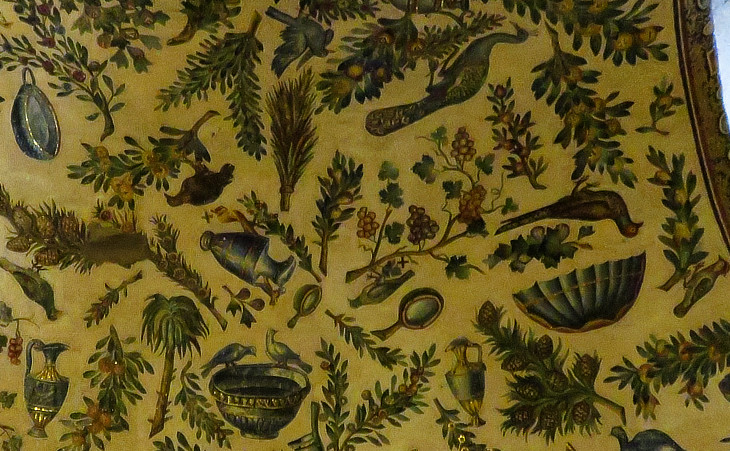 Details of the mosaics with early Christian symbols: peacock=Resurrection (left) and drinking doves=Christians achieving Divine Grace (right - see those at the Mausoleum of Galla Placidia in Ravenna)

The mosaics which decorated the central hall are lost, but those in the ambulatory can still be admired (they were restored in the XIXth century); they are divided into sections; in some of them a geometric pattern prevails; in others the subjects seem to float in the air. You may wish to see the influence these mosaics had on the decoration of Villa Giulia and other Renaissance buildings. 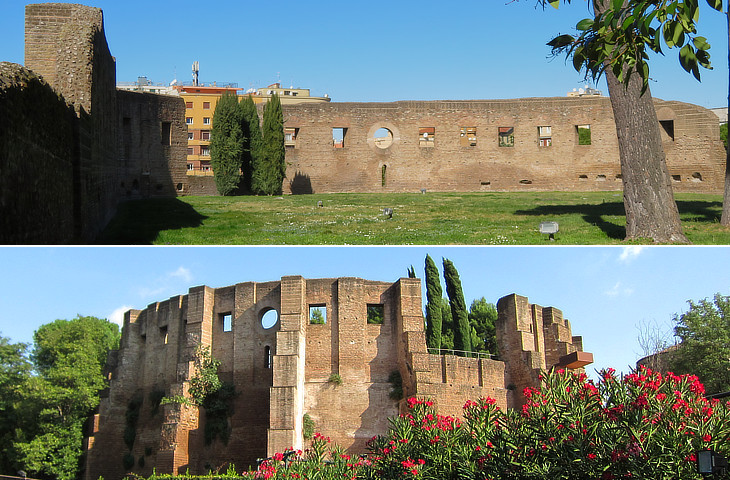 (above) Remaining wall seen from S. Costanza; (below) the same wall and its supporting structures

The remains of a thick wall to the right of the mausoleum are thought to have been part of a very large courtyard which surrounded the mausoleum. Because of their curved shape initially they were believed to be part of a hippodrome.

Next plate in Book 6: S. Maria a Trevi.
Next step in Day 2 itinerary: Piazza Barberini.