The plate shows the outer side of the gate built in 1574 by Jacopo del Duca for Pope Gregory XIII. Its design is similar to the entrance to a villa. Porta S. Giovanni replaced Porta Asinaria, a nearby ancient gate. The road shown in the plate was called in the past Via Campana (because it was used to reach Campania, the region around Naples), while today it is called Via Appia Nuova.
The view is taken from the green dot in the small 1748 map here below. In the description below the plate Vasi made reference to: 1) Mola sulla marana (mill on a small stream of water); 2) Road leading to Via Latina. The small map shows also: 3) Porta S. Giovanni; 4) Porta Asinaria.

The view in June 2009 (it was taken from a slightly different position in order to show Porta Asinaria and Basilica di S. Giovanni in Laterano after which the gate was named)

Quartiere Appio, one of the most populated new districts of Rome, lies immediately outside Porta S. Giovanni; thus there is always a lot of traffic flowing into and out of Rome and six other openings were made in the walls to avoid back-ups.
The marana mentioned by Vasi does not exist any longer. It was an effect of the abandonment of the facilities built by the ancient Romans to control the flow of small urban streams. It entered the city near S. Sisto Vecchio and it crossed Circus Maximus making these areas very unhealthy. 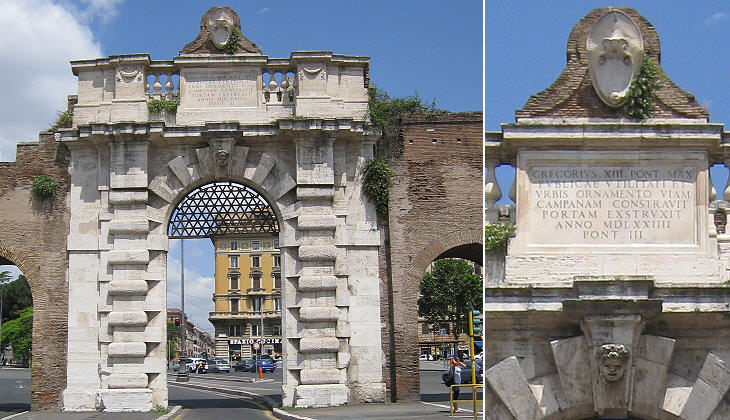 (left) The gate; (right) detail of the inscription

Pope Sixtus V is usually regarded as having been the "town planner" of Papal Rome, however the process of opening new streets and improving communications between Rome and the other towns of the Papal State was started by his predecessor Pope Gregory XIII. When the gate was built and until the end of the XIXth century the neighbourhood inside the walls was very scarcely populated; most of the land was part of Villa Giustiniani Massimo.

When Emperor Aurelian surrounded Rome with new walls he did not plan for a gate at this location; there was only a posterula, a small opening for the farmers who lived outside the walls. This can explain its name: Asinaria (of the donkeys). It was only after the Lateran became the residence of the popes that a proper gate was built; this was done by Emperor Honorius in the frame of an overall improvement of the fortifications of Rome. Over the centuries it ended up with being at a lower level than the nearby area and for this reason it was eventually closed. 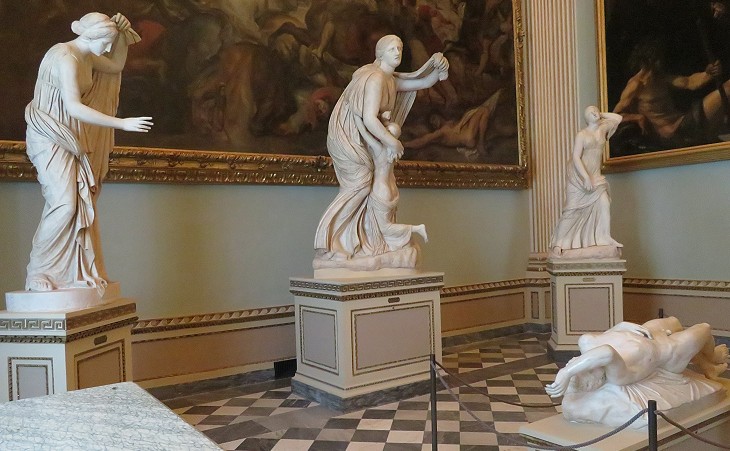 Florence - Galleria degli Uffizi: ancient statues portraying Niobe and some of her children

In 1583 a group of ancient statues was found in a vineyard outside Porta San Giovanni. It soon became clear that many of them were related to the myth of Niobe, whose many (10 or 12 or 14) children were killed by Apollo and Artemis because she had derided their mother who had only two children (learn more about Niobe). The statues were bought by Cardinal Ferdinando de' Medici who placed them in the gardens of Villa Medici. In 1780 they were moved to Florence. Already in the XVIIIth century art historians came to the conclusion that not all the statues at Villa Medici were associable to the myth of Niobe. Pliny mentioned the existence of statues portraying Niobe's children on one side of Tempio di Apollo Sosiano, but today archaeologists suggest they might have embellished Horti Lamiani, a set of gardens not too far from Porta San Giovanni. 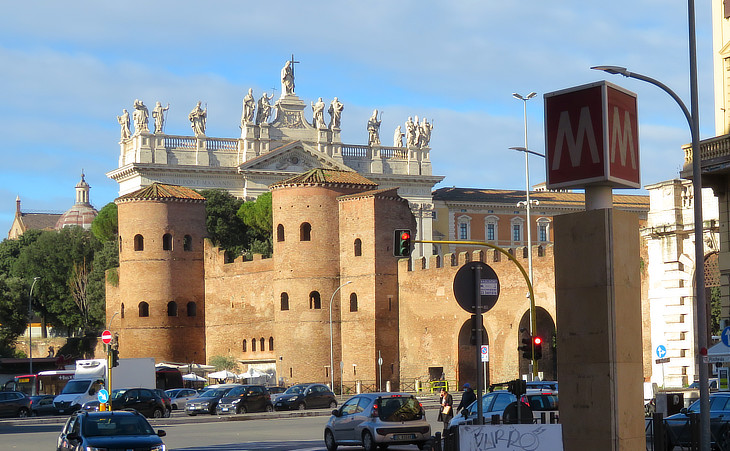 Location of the New Underground Station of S. Giovanni

The construction of a section of new underground line linking the easternmost suburbs of Rome with the city centre required the digging of deep trenches outside Porta S. Giovanni. The excavation work unearthed a vast amount of ancient items which had been used as filling materials in the Late Empire and afterwards. In 2018 a new underground station was inaugurated near the gate. It was designed so that the crossing through the spaces of the S. Giovanni station of line C will not only be a functional one of going from one place to another, but will be a real journey inside a micro millennial history, the micro history of this small piece of the city (architects Andrea Grimaldi and Filippo Lambertucci). 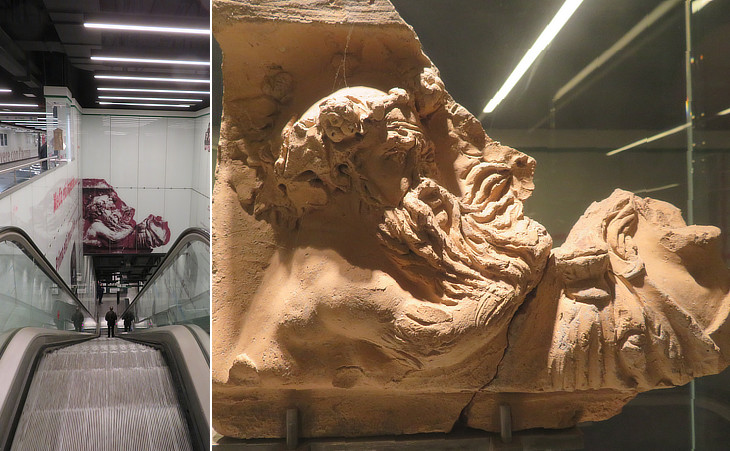 (left) One of the escalators; (right) fragment of a terracotta relief of Silenus, a satyr who was the companion and tutor of Dionysus/Bacchus

The definition of the space of the station was executed in the form of the "stratigraphy", a stratigraphical representation lining the walls which is used repeatedly throughout the station allowing the passengers and visitors to experience the passage of time and descent through history on their way to and from the platforms. Thanks to its function as a graphic indicator of historical contexts in relation to the contemporary city above ground, the stratigraphy aids the station users to understand and adapt to the different historical phases they pass. (..) The archaeological findings are exhibited in horizontal glass panelled display cabinets, which line the walls from ceiling to corresponding floor. (..) The heterogeneity of the materials has allowed us to identify and categorise various themes in history to provide the metropolitan users with a key to understanding their meaning and recognizing their value. To do this each specific area has been labelled with a title that suggests a possible story; The Recycled Findings, The Fragments Tell, etc. Grimaldi and Lambertucci 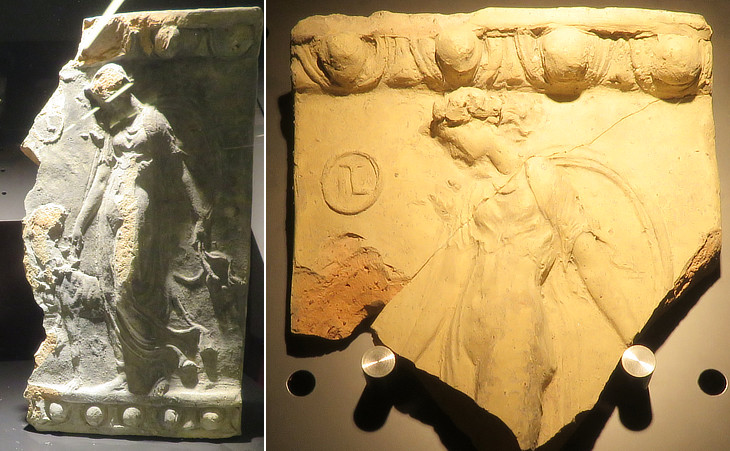 The excavations brought to light an area just outside Porta S. Giovanni. When new walls of Rome were erected by Emperor Aurelian in 275 AD all buildings outside them were pulled down because they could be used as a shelter by enemies; their demolition provided all sorts of materials for levelling the ground in order to use it for agricultural purposes. 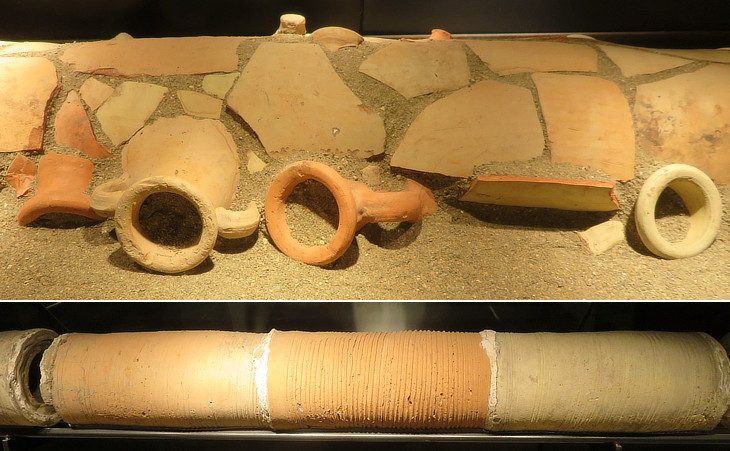 The excavations revealed an important farm with extensive water works, most likely of the time of Emperor Honorius when the walls were restored. The area featured many streams and the water works were aimed at preventing its becoming marshy. 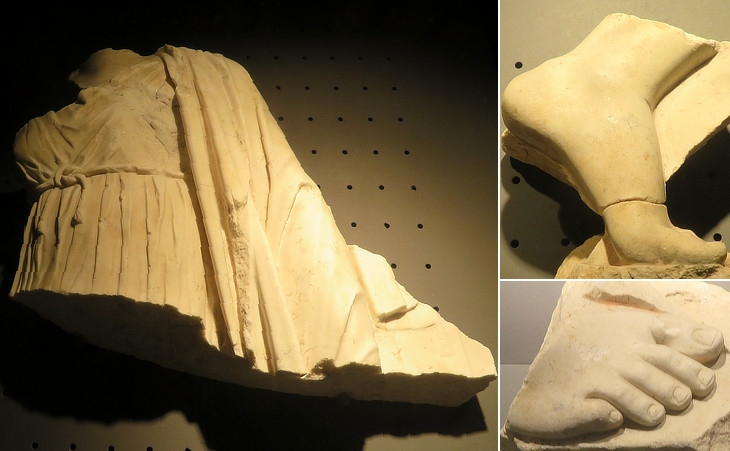 A limited number of fragments of marble statues were found; they cannot be attributed to a specific monument, perhaps they embellished some of the horti (ancient villas) inside the walls.

The Walls between Porta S. Giovanni and Porta Metronia 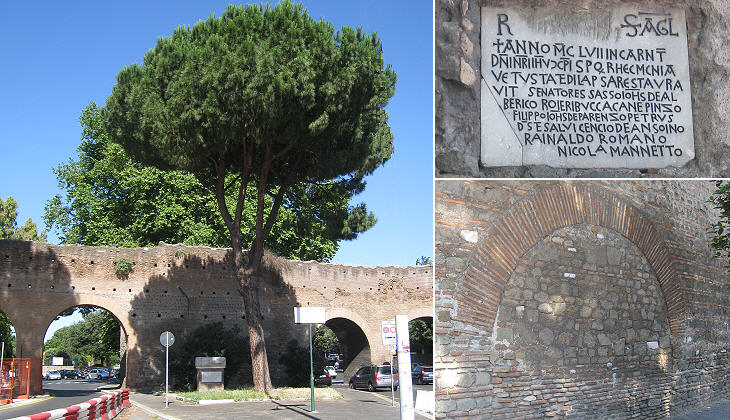 Roman car drivers who live in Quartiere Appio know Porta Metronia very well, but the openings in the walls which they call Porta Metronia were made in the 1930s. The historical gate, a posterula, is partly below the current ground level and only its arch is visible.
An inscription above the inner side of the gate sheds some light on a very obscure period of the history of Rome: "Anno MCLVII incarn(a)t(ionis) D(omi)ni n(ost)ri IHV (Iesu) XPI (Christi) S. P. Q. R. hec menia vetustate dilapsa restauravit senatores ..." followed by the names of ten Roman senators. In the middle of the XIIth century the authority of the pope was challenged by the attempts by the Romans to establish the independence of the city from both the Pope and the Emperor. In 1143 the ancient Roman Senate was revived (Renovatio Senatus) and in 1145 the pope (Lucius II) was killed by a stone thrown during a riot.
The Senators decided to celebrate the restoration of Porta Metronia by placing an inscription, something which had not been done for centuries. The inscription shows a total lack of skill, although the ancient monuments provided plenty of examples for it. Another interesting aspect is the absence of a reference to Adrian IV, the reigning pope (you may wish to see a similar inscription at Ponte Cestio).

A section of the walls near Porta Metronia

Next plate in Book 1: Porta Latina.
Next step in Day 1 itinerary: S. Croce in Gerusalemme .
Next step in your tour of Rione Monti: S. Giovanni in Laterano.