Links to this page can be found in Book 1, Map A2 and Rione Monti.

This 1747 small etching by Giuseppe Vasi is a bird's-eye view of the ancient walls which surrounded Castra Praetoria, the barracks of the Praetoriani, the Roman imperial guards; at Vasi's time balloon flights were yet to come, but this type of view was very popular and the "maps" of Rome were all drawn with this approach, with the exception in 1748 of the first "modern" map of Rome by Giovan Battista Nolli.
The theoretical observation point is indicated by a green dot in the excerpt from Nolli's map here below. In the description below the plate Vasi made reference to: 1) Porta Chiusa; 2) Via Tiburtina; 3) Porta Pia; 4) Via Nomentana; 5) "Vigne" (farms/villas) inside the walls; 6) Villa Patrizi. 1), 3) and 6) are shown in other pages. 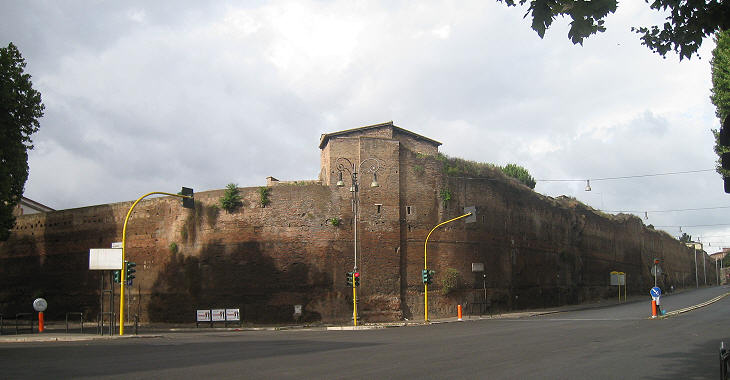 Today very busy roads go round the ancient walls, which have lost most of the small towers shown in the etching. The large area inside the wall is now occupied by the Italian National Library and by barracks of the Italian Army. 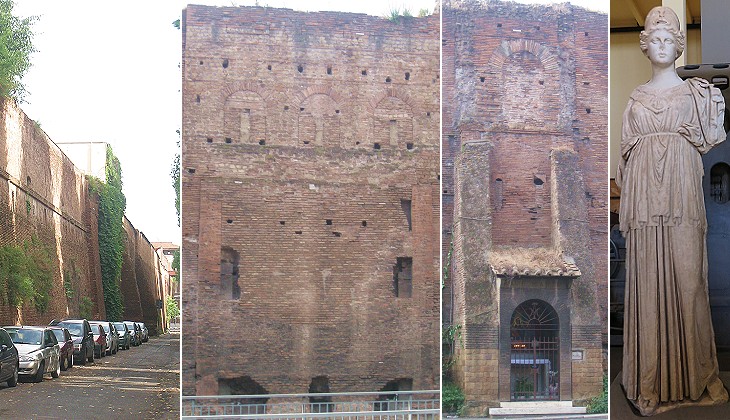 (left to right) Eastern side of the walls; a former gate in the northern side; a small chapel between the projecting walls of a former tower; Centrale Montemartini: statue of Athena which was found in 1882 near Castro Pretorio (IIIrd century BC)

The barracks were built at the time of Emperor Tiberius on a site which was well outside the city limits, in compliance with the law which forbade armed people from entering Rome. The castra had a rectangular shape and were protected by walls with a gate on each side; in 275 Emperor Aurelian incorporated them into the new walls of Rome; the external gates were closed. The Praetorian Guard was dissolved by Emperor Constantine who probably ordered the demolition of the western wall of the barracks which was not part of the city fortifications. The image used as background for this page shows a walled up arch in the northern side of the walls.

Next plate in Book 1: Porta S. Lorenzo.
Next step in your tour of Rione Monti: Porta Chiusa.