Porta Salaria
(Vasi at work in the Grand View of Rome)

Links to this page can be found in Book 1, Map A2, Day 2, Rione Colonna and Rione Trevi. 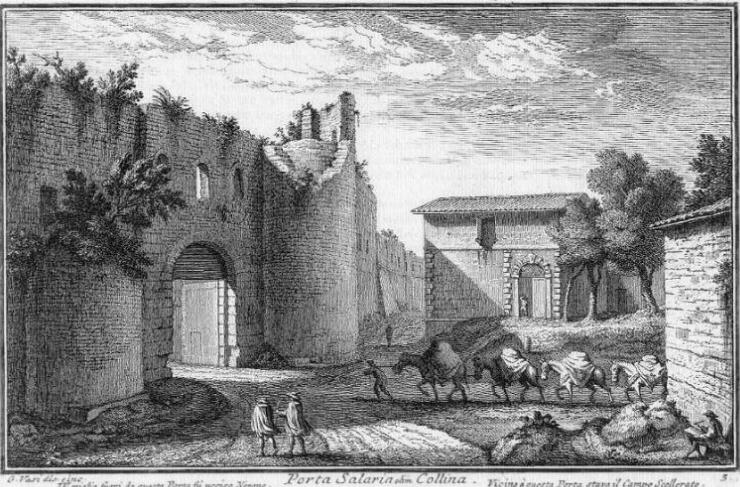 Porta Salaria (or Salara) was named after the road which started at the gate and reached the Adriatic Sea; this road was important for the trade of salt (It. sale) which was used for food preservation and for cheese production. It was shipped to Rome by barge from the salt-works near Ostia and then reached the inner parts of the Italian peninsula (such as Sabina) by Via Salaria. The horses of the short caravan shown in this 1747 etching by Giuseppe Vasi (one of which is shown in the image used as background for this page) bear the coat of arms of Benedict XIV, the reigning pope.
In the description below the plate Vasi says that Emperor Nero was killed four miles from this gate (see the Emperor's assumed tomb); he adds that the Vestals who broke their vow of chastity were buried alive in Campus Sceleratus (Wicked Field), a piece of land outside the gate. The view is taken from the green dot in the small 1748 map here below which shows: 1) Porta Salaria; 2) Column of Porta Pia; 3) Horti Sallustiani; 4) Villa Paolina. The dotted line in the small map delineates the border between Rione Colonna (left) and Rione Trevi (right). 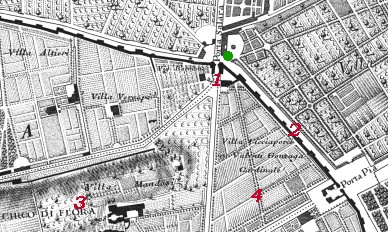 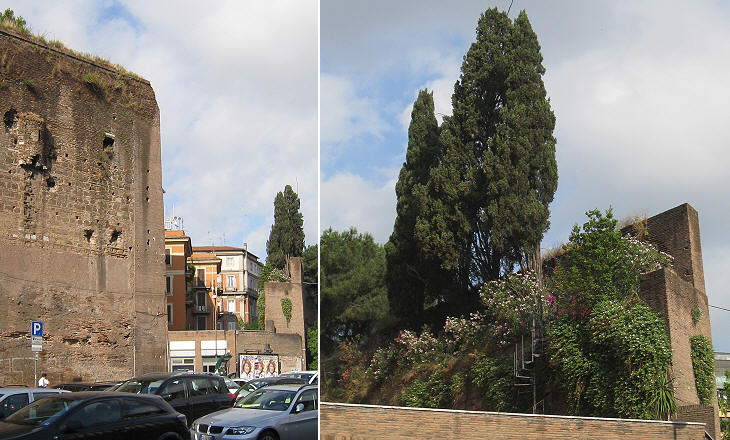 Porta Salaria was greatly damaged in 1870 by the artillery of the Italian army. A new gate was built after the annexation of Rome to the Italian Kingdom, but a few years later it was pulled down to allow an easier flow of traffic to new housing developments along Via Salaria. 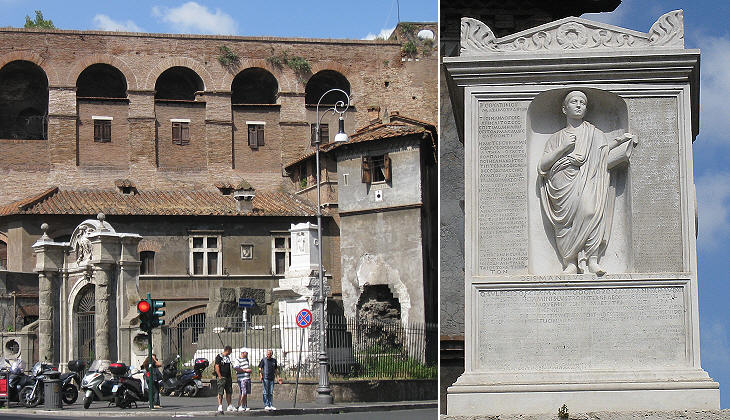 The two round towers which protected the gate were pulled down and two funerary monuments were discovered in their foundations. One of them was reconstructed in the small garden of an odd looking house; originally the building was used by the guards at the gate; in the XIXth century it was given a mock medieval/Renaissance appearance and a large baroque portal. The monument is dedicated to Quintus Sulpicius Maximus, a boy of eleven who won a contest in Greek poetry at the time of Emperor Domitian. His parents had his poem finely engraved at the sides of the statue which portrays the boy dressed as an adult (you may wish to see a detail of the original monument - it opens in another window).
The other monument was reconstructed between two towers of the walls between Porta Salaria and Porta Pinciana. 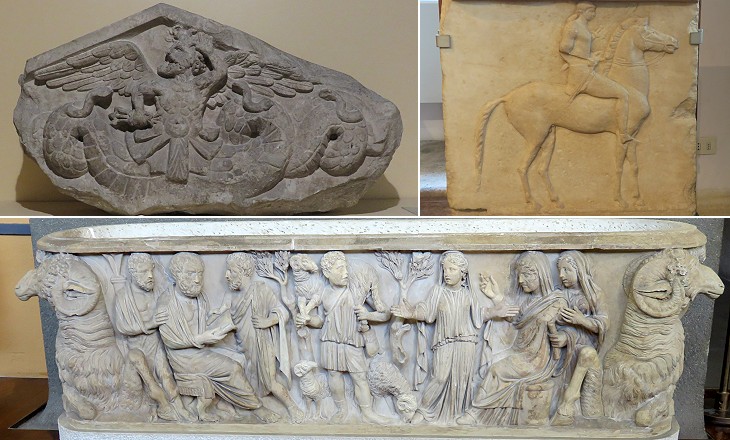 Funerary reliefs found near the gate or along Via Salaria: (above-left) Centrale Montemartini: relief depicting a monster (perhaps Typhon - Ist century BC); (above-right) Museo di Scultura Antica Giovanni Barracco: fragment of a large Greek relief of the VIth century BC; (below) Musei Vaticani: IIIrd century AD crypto-Christian sarcophagus, i.e. a sarcophagus which cannot be said to have been made for a Christian, but with elements of its decoration (the Good Shepherd) which characterized later Christian sarcophagi

In 1887 a large circular tomb was unearthed near Villa Albani, not far from Porta Salaria. Fragments of other funerary monuments found outside the gate are now dispersed in the many archaeological museums of Rome.

Centrale Montemartini: another sarcophagus found near Porta Salaria (first half of the IIIrd century - see a list of sarcophagi which were found in Rome) 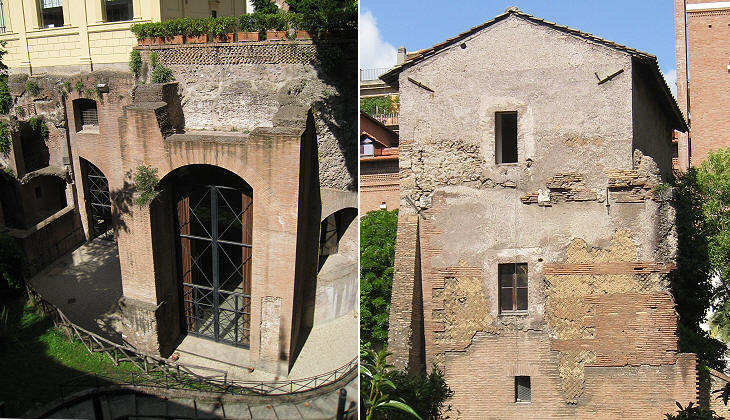 In my Father Gabriel Vacca's Vineyard, near the Gate Salaria, within the Walls is a Vale called, of the Sallustian Gardens. By digging there, my Father lighted on a large Oval Structure, with a Portico about it, adorn'd with Columns of yellow Marble, eighteen Spans high, with Corinthtan Capitals and Bases. There were four Avenues to this Oval Structure, and as many Stair Cases going up to it. The upper Pavement was of Marble of several Colours curiously laid (see a hypothetical reconstruction of the building). At each Door we observ'd two Columns of Eastern Alabaster, so transparent, that the Sun Beams shin'd through it. Under this Oval Structure we found some passages, so lofty, that a Man might go upright under Ground, and those subterraneous Ways were all lin'd with Grecian Marble. (..) In the same Place were also dug up many Medals of the Emperor Gordian scatter'd up and down, and some Silver ones, but no bigger than a Brass Farthing, and with them many Pieces of Mosaick Work. At that Time the Cardinal de Montepolitiano bought Part of the yellow Marble Columns, wherewith the Rails of his Chappel in the Church of St. Peter in Montorio were adorn'd. He also purchas'd the Alabaster Columns one of which being whole, after wiping off the Dirt, he caused to be pollished with the others, which were broken to Pieces he adorned the Seats. All which Ware, by him highly valu'd, with other Monuments of Antiquity and of Curiosity, he design'd as a Present to the King of Portugal but when the Ship Was out at Sea, unsteady Fortune, in whose Power that Treasure was, deliver'd it up to the Waves.
Flaminius Vacca's 1594 account of discoveries of antiquities which took place in his lifetime, as quoted in "The Travels of the Learned Father Montfaucon from Paris thro' Italy - 1712"
Sallust (Gaius Sallustius Crispus) was a friend of Julius Caesar who appointed him proconsul of Africa Nova (today's eastern Algeria). The death of Caesar in 44 BC caused the end of Sallust's political career. With the fortune he had made in Africa he built a large villa in the northern part of Rome, where he wrote books covering the main historical events of his lifetime. Horti is a Latin word that initially indicated a sort of family kitchen garden, but which eventually was used with reference to large suburban villas. Eventually Horti Sallustiani was acquired by Emperor Tiberius and it became a favourite residence of the Roman emperors.
In the late XIXth century the ground of the area was levelled and the main building of the ancient villa ended up below current street level. Today it belongs to the Chamber of Commerce of Rome and its main hall is used as a conference room. 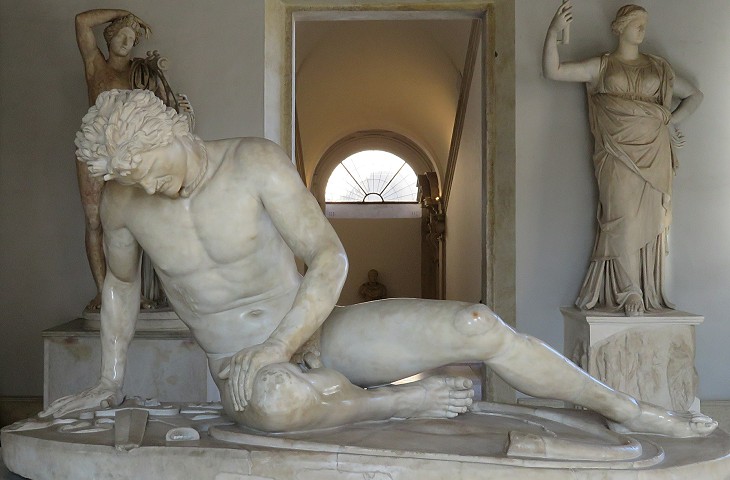 Musei Capitolini: The Dying Galatian (aka The Dying Gladiator according to Lord Byron), a Roman copy of a (lost) bronze statue made for Attalus I, King of Pergamum, to celebrate his victory against the Galatians, a tribe of Celtic origin who lived on the Anatolian tableland. It was found at Horti Sallustiani in ca 1623

Myrmillo Dying, has the Strongest Expression of any Statue I have seen: He leans upon one Arm which gives way a little to the Weight of his Body, which evidently has no Force, because in that Action nothing can support it but holding his Thighs firm and pressing his Legs to the Ground, but these Flag, and are flipping from under him, as appears by their being in a Position they can't hold, his other Hand is just sliding off his Thigh: His Mouth is a little open, and his Under Lip hangs: His Eyes are half clos'd, but incline faintly on one side towards the part where his Body goes to fall: His Hair is short, and clotted, and he has a Rope (actually a torc) about his Neck, which adds extremely to the Pity we conceive for him.
Jonathan and Jonathan Richardson - Account of Some of the Statues, etc. in Italy - 1722
The dying Gladiator is the chief boast of the Capitol. The antiquarian Nibby insists that this statue represents a Gaul, that the sculpture is Grecian, that it formed part of a group on a pediment: that the cord round the neck is a twisted chain, an ornament peculiar to the Gauls; and that the form of the shield, the bugles, the style of the hair, and the mustachios, all prove it to be a Gaul. (..) I owned myself unwilling to consider the Gladiator, a Gaul, but the reasoning struck me, and I am too unlearned to weigh the arguments he used, much less confute them.
Anna Jameson - Diary of an Ennuyée - 1826
In the small 1748 map the site of Horti Sallustiani is named as Circo di Flora because a long depression in the ground was believed to have been an ancient circus where festivals dedicated to Flora, Roman goddess of flowers and spring, were held. These festivals are mentioned by some Roman writers. Today archaeologists think that a temple to Flora and an adjoining circus stood on the site of Piazza and Palazzo Barberini. It is likely however that a small circus was one of the facilities of Horti Sallustiani because in ca 1621 a small obelisk was found there and it is known that often obelisks decorated circuses, as at Circus Maximus.
You may wish to see the Ludovisi Gaul and the Persian Warrior, two other statues which are thought to be copies of originals made for Attalus. 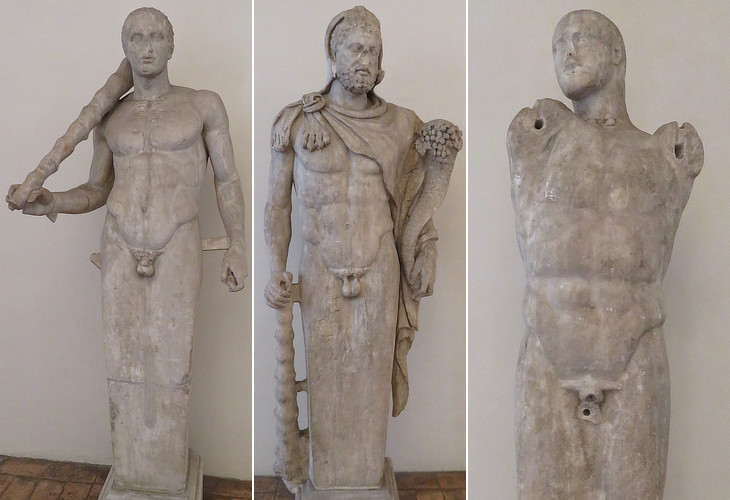 Herms were marble or bronze four-cornered pillars surmounted by a bust. Male herms were given genitals. Herms originated in piles of stones used as road- and boundary-markers, but early on developed into a god depiction.
Oxford Classical Dictionary
The gigantic herms which were found at Horti Sallustiani most likely decorated porticoes which supported the circus. They were acquired by the Ludovisi who placed them inside their Casino and were part of the family collection of antiquities. The housing development of Quartiere Sallustiano on the site of the Horti Sallustiani in the early XXth century led to finding many other statues; they indicate that the decoration of the ancient villa mainly occurred in the late Ist century BC or early Ist century AD. In some instances original Greek statues of prior periods were used. 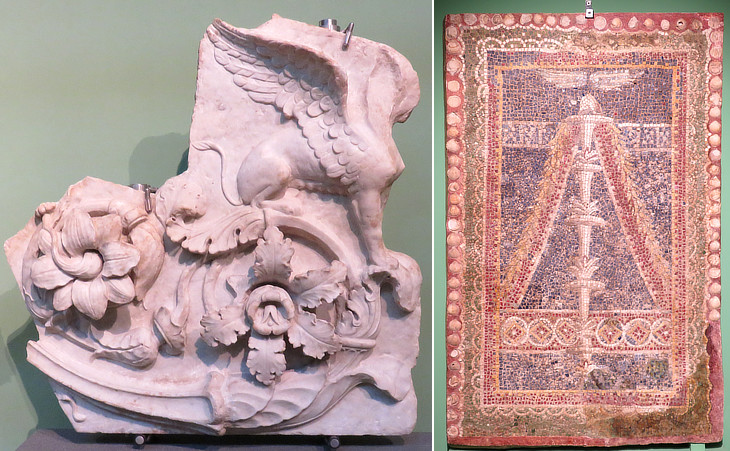 Centrale Montemartini: fragments of a frieze and of a floor mosaic from the area of Horti Sallustiani

Horti Liciniani, Horti di Mecenate, Horti Lamiani and Horti Serviliani are other ancient villas within or immediately outside the walls of Rome where many fine works of art were found.

In the XIXth century the balance between prints showing monuments of ancient and of modern Rome changed in a significant manner. The market was more interested in the ruins of Rome's glorious past than in the theatrical architectures of the Baroque period. For this reason Gaetano Cottafavi, who in 1842 illustrated a very detailed guide of Rome by Rev. Jeremiah Donovan, added a plate depicting Horti Sallustiani to the most usual views of ancient Rome. In the background it is possible to see the casino of Villa Paolina, built in 1750 ca. by Cardinal Silvio Valenti Gonzaga. This cardinal was a collector of fine arts and his (imaginary) gallery was the subject of a famous painting by Giovanni Paolo Pannini (it opens in another window).
In 1816 the villa was bought by Paolina Borghese, one of the sisters of Napoleon Bonaparte, hence the current name of the Villa. After several other changes of ownership the property was bought by France in 1951 for its Embassy to the Holy See (the French Embassy to Italy is at Palazzo Farnese).

The Walls between Porta Salaria and Porta Pia 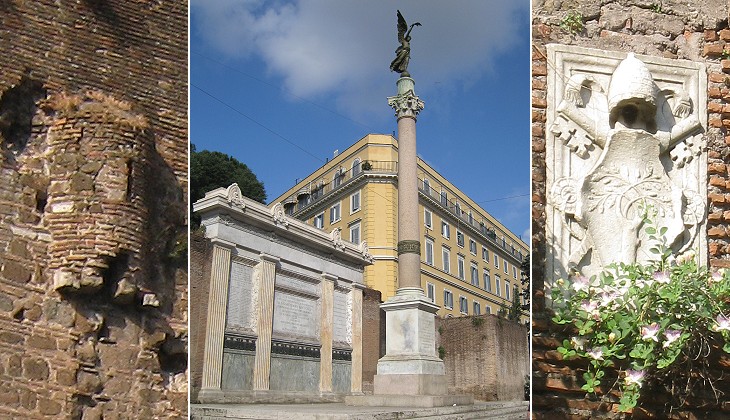 The short stretch of walls between the two gates retains memories of the history of Rome and of Italy and in addition to these the only remaining necessarium (what an appropriate name!) out of 260 such facilities which still existed in the XVIth century.
The column belonged to the baths built by Emperor Nero and restored by Emperor Alexander Severus. In 1895 it was utilized to support a Winged Victory which celebrates the Breach of Porta Pia, through which the Italian Army entered Rome on September 20, 1870. A few meters away there is a fine coat of arms of one of the Della Rovere popes (either Sixtus IV or Julius II).