You may wish to see a page on the Al-Bass Necropolis of Tyre first. 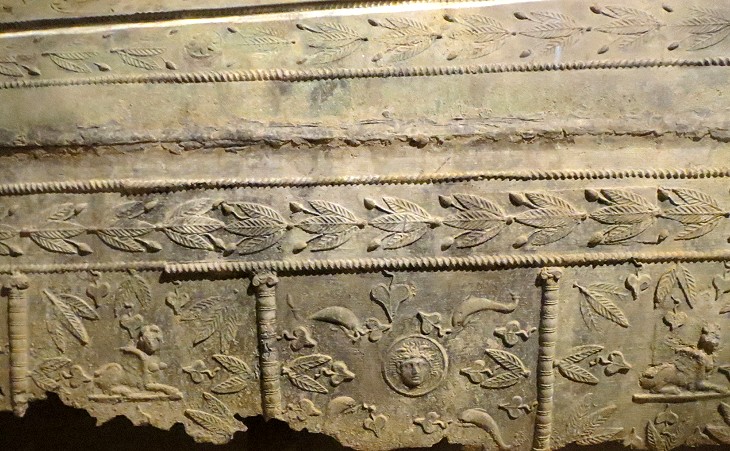 The first archaeological excavations in Lebanon were carried out by French philosopher Ernest Renan immediately after the 1860 French intervention in the country. He found a beautiful floor mosaic at Qabr Hiram near Tyre, which was the first work of art from Lebanon to be shipped to France. In 1932 when the country was under French Mandate, the Louvre Museum acquired a very well preserved lead sarcophagus with an elaborate decoration based on architectural elements framing sphinxes and Gorgons, mythological creatures which turned away the evil spirits. Lead sarcophagi, in spite of the perishable nature of the metal, have survived in considerable numbers and are found both in the eastern and in the western parts of the Roman Empire, including Britain. 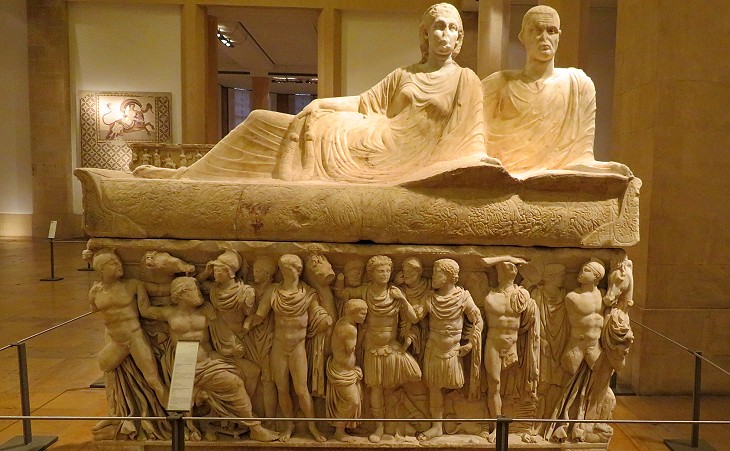 National Museum of Beirut: Sarcophagus of Achilles (A)

The excavations at the Al-Bass Necropolis which were carried out in 1946-1975 by Emir Maurice Chehab, Head of the Antiquities Services, led to the discovery of four large and beautiful sarcophagi of the IInd century AD which were moved to the National Museum of Beirut. Three of them are characterized by a lid on which the dead are portrayed while attending their funerary banquet on a high and finely decorated couch; this design is typical of sarcophagi which were made in today's western Turkey which was renowned for its marble quarries and its workshops of skilled sculptors (see a sarcophagus in the museum of Antalya whereas a similar sarcophagus at Palmyra was most likely the work of a local sculptor).
The relief on the box portrays Achilles wearing his armour to join the other Greek leaders in the War of Troy, after Ulysses found him at Skyros. 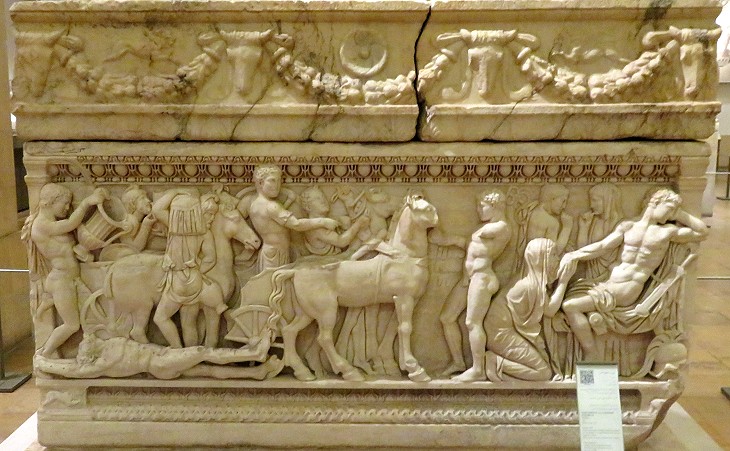 Sarcophagus of Achilles (B): relief on the lid: bucrania (ox-sculls) between garlands of fruits and flowers, a decorative motif which can be seen on many other sarcophagi from Tyre; relief on the box: Achilles drags the body of Hector and Priam begs Achilles to give him the body of his son

The events of the War of Troy were often depicted on sarcophagi and mosaics. The relief on the box of this sarcophagus shows two very dramatic and moving episodes of Achilles' myth. You may wish to see a sarcophagus found at Ostia with similar reliefs and a page on Roman funerary rites and the manufacture and trade of sarcophagi. 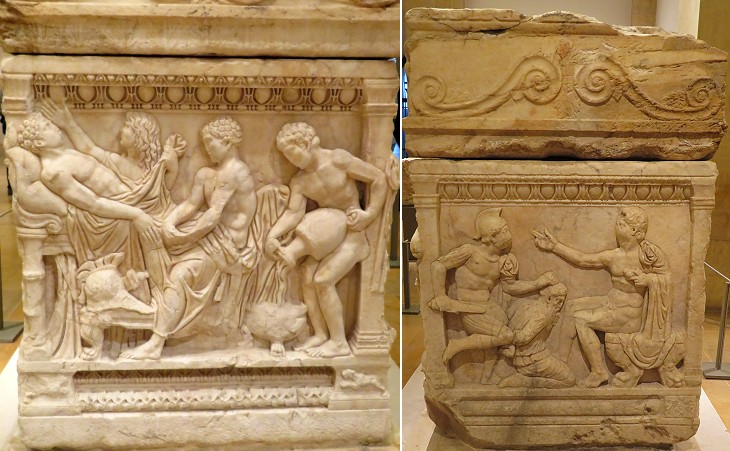 Sarcophagi of Achilles: (left-B) Achilles grieves for Patroclus (in this relief Achilles has the same age as Patroclus, but in the relief at Ostia the latter is clearly older); (right-A) Apollo, Venus, Diana and another goddess; they all were on the Trojan side

When Briseis, beautiful as golden Aphrodite, saw the corpse of Patroclus mangled by the bronze blades, she flung herself on the body, shrieking loudly, and tore with her hands at her breasts, her tender neck, and lovely face. (..) Achilles heaved a heavy sigh, stirred by memory: "How often, my unlucky, my beloved friend, you would, swiftly and deftly, serve up a savoury meal for us in our hut, when we Greeks were about to attack the horse-taming Trojans. Now you lie here mangled, while I, consumed by grief, lack the heart to eat or drink, though the food is ready and to hand."
Homer - Iliad - Book XIX - Prose translation by A. S. Kline. 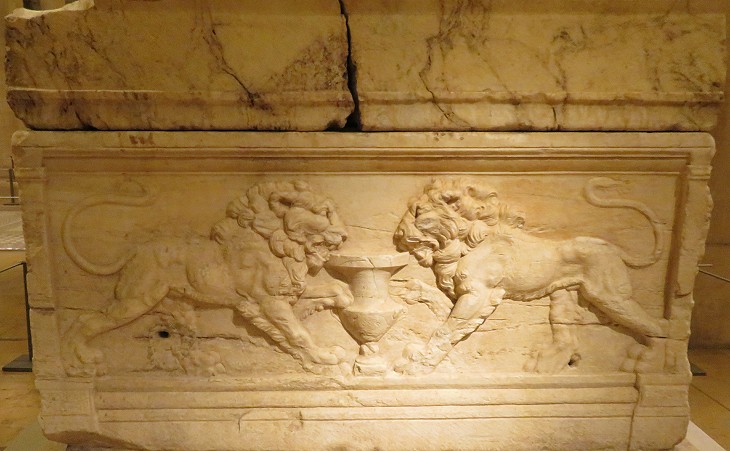 Sarcophagus of Achilles (B): rear long side

Apparently this relief could seem to have a merely decorative purpose, but the image of two animals facing each other (very often two peacocks or two doves) and drinking from a vase is an early Christian symbol of Resurrection or Divine Grace, so it might have had a symbolic meaning also in the pagan world. Maybe in this case the two lions were the guardians of a cinerary urn or of a vase symbolizing life (see this same subject in a roughly cut sarcophagus at Bet She'arim in Galilee). 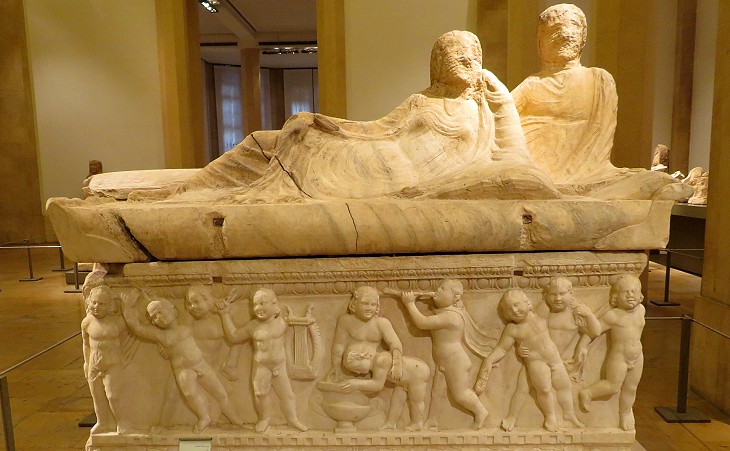 Sarcophagus of the Drunken Cupids

The subject of drunken or just playing cupids can be seen in many other sarcophagi. In particular two sarcophagi at Porto and Side are so similar to that at Tyre that one wonders whether they were actually made in the same workshop. The fact that the heads of the dead were not finished is another proof that these large sarcophagi were made abroad and then shipped to Tyre where a local sculptor portrayed the final customers. This can be noticed also in sarcophagi which were found in Italy. 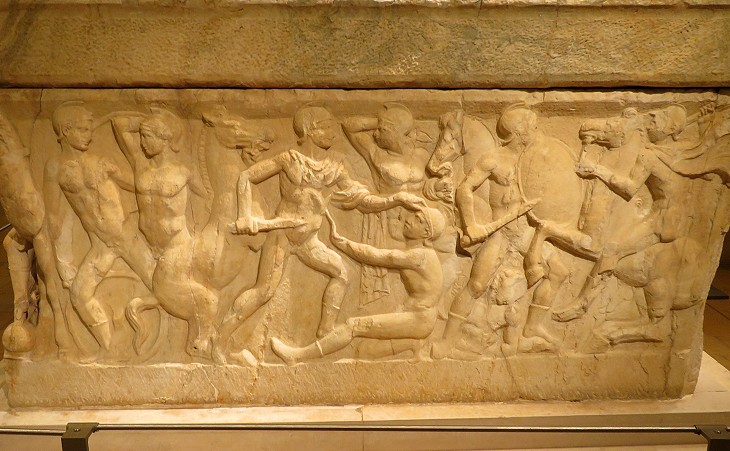 Sarcophagus with a Fighting Scene: rear long side which shows a warrior pleading mercy

The relief might depict one of the six episodes of the Iliad in which a warrior pleads mercy (in vain).
"Achilles, at your knees I beg for your acknowledgement and mercy. I come as a known suppliant to you, Beloved of Zeus, for I first ate bread at your table the day you took me captive in the orchard, and took me far from parents and friends, to sell me in sacred Lemnos. I brought you the price of a hundred oxen. Then I was ransomed, for three times as much, and this is the twelfth day since I came home to Ilium after all my suffering, only for mortal fate to place me once more in your hands." So the highborn son of Priam pleaded with Achilles, but harsh was the reply. "Fool, do not talk to me of ransom, make me no speeches! Before the day of fate overtook Patroclus, I had a mind to spare you Trojans. Many I took alive, selling them far away. Now not one shall keep his life, of all the gods send to my hands before Troy not one solitary Trojan, and least of all the sons of Priam." (..) So he spoke, and Lycaon's heart failed him, his knees likewise, and letting go the spear he sank to the ground his arms outstretched. But Achilles, drawing his keen sword, struck him on the neck and collarbone, the double-edged blade biting through, so he fell headlong in the dust, and the black blood ran out and soaked the earth.
Homer - Iliad - Book XXI - Prose translation by A. S. Kline. 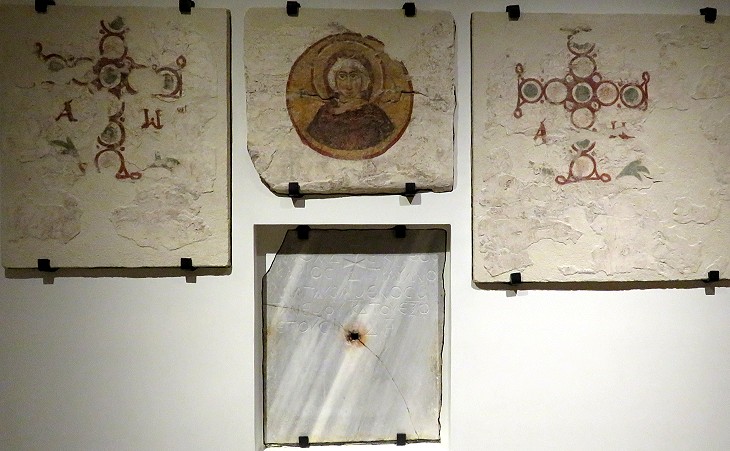 The excavations at the Al-Bass Necropolis did not unearth much evidence that it had been used after the late IIIrd century, because by and large the hundreds of sarcophagi which were found were not decorated with Christian symbols. A rare case of tomb which was made or reutilized after the IIIrd century was decorated with three small frescoes; two of them depict crosses, but the important one is a very early image of the Virgin Mary. Restorers were perhaps influenced by a mosaic at S. Apollinare Nuovo at Ravenna.

Jewels from the necropolis of Deb'aal near Tyre

The image used as background for this page shows a plain decorative motif of a sarcophagus.

Move to the Necropolis and the Hippodrome or to the Roman Southern Harbour Neighbourhood.