Museo Lapidario Maffeiano of Verona: front of an Etruscan cinerary urn from Volterra which depicts the abduction of Helen

The events chanted by Homer in his poems were popular among the pre-Roman Italian tribes. Many Etruscan tombs contained Greek vases (e.g. the Euphronios Krater) which were decorated with episodes of the War of Troy, which were also depicted on locally made cinerary urns. 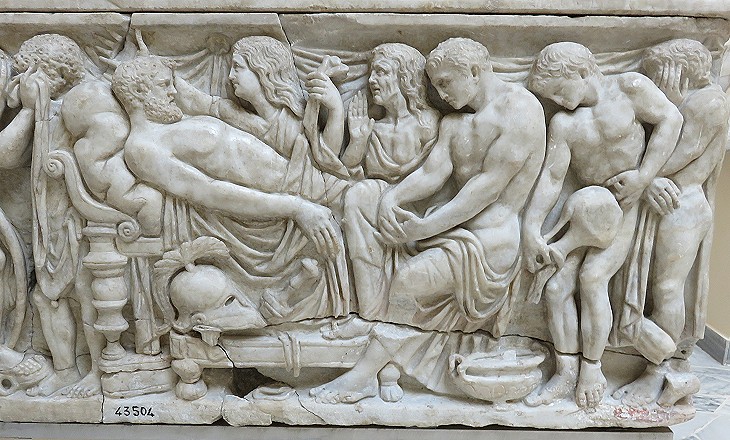 The interest towards Troy grew in the IInd century BC when the Romans began to conquer territories in today's Turkey. In 85 BC however, Gaius Flavius Fimbria, a Roman politician who opposed Silla, did not hesitate to plunder Troy (the VIIIth settlement which did not have walls), because its inhabitants had sought the protection of Silla. Episodes of the Iliad continued to be depicted in frescoes (e.g. at Pompeii), mosaics (e.g. at Neapolis in Tunisia) and reliefs. 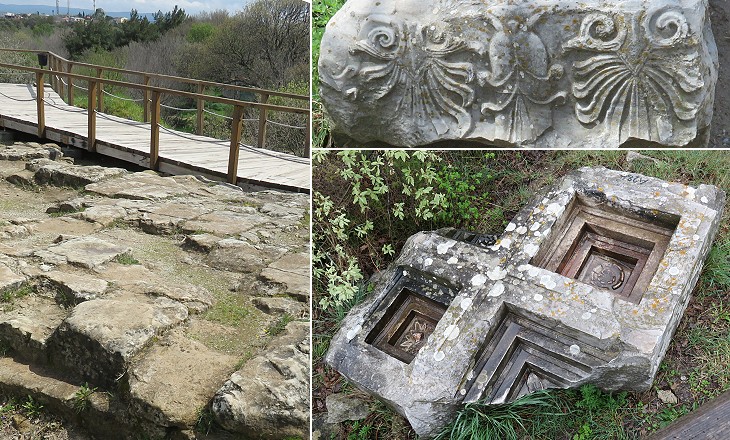 During the initial phases of their conquests, the Romans did not care much about their past, but after the victory against Carthage and the Macedonian Wars, Cato the Elder, a Roman statesman, wrote a book about the origin of the city. He claimed that Rome was founded by descendants of Aeneas, a Trojan warrior who fled Troy with a few companions. After a long journey he landed on the Italian shores where his son Ascanius founded Alba Longa. Cato based his statements on some ancient accounts, but his book was meant to fight the growing influence of Hellenism on Roman lifestyle, by establishing an association between Rome and Troy, the enemy of the Greeks.
The link between the two cities was enhanced by the Roman claim that the Palladion, a wooden statue given by Athena to the Trojans which ensured the safety of their city, had been brought to Rome where it was kept by the Vestals.
For these reasons Julius Caesar, who himself pretended to descend from Aeneas (and his mother Venus), promoted the foundation of Ilium Novum (New Troy, Ilium being an alternate name for the city, hence Iliad). A Temple to Athena was built at the top of the town in remembrance of the ancient one. During the long reign of Emperor Augustus Roman poets Virgil and Ovid gave new accounts of the War of Troy which were more sympathetic towards the Trojans.

Still Ilium's flames their pointed columns raise,
And the red Hellespont reflects the blaze.
Shed on Jove's altar are the poor remains
Of blood, which trickl'd from old Priam's veins.
Cassandra lifts her hands to Heav'n in vain,
Drag'd by her sacred hair; the trembling train
Of matrons to their burning temples fly:
There to their Gods for kind protection cry;
And to their statues cling 'till forc'd away,
The victor Greeks bear off th' invidious prey. 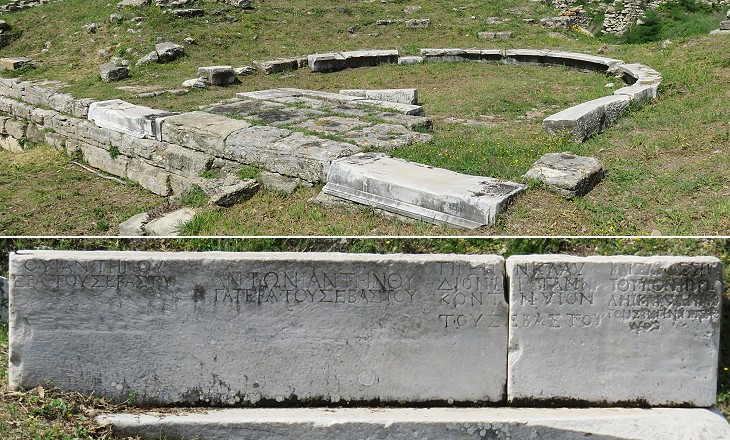 (above) Bouleuterion, small hall for meetings of the city council; (below) inscription listing several Roman emperors (Sebastoy in Greek)

(Aeneas to Dido, Queen of Carthage), what you command me to relate
Renews the sad remembrance of our fate:
An empire from its old foundations rent,
And ev'ry woe the Trojans underwent;
A peopled city made a desert place;
All that I saw, and part of which I was:
Not ev'n the hardest of our foes could hear,
Nor stern Ulysses tell without a tear.
And now the latter watch of wasting night,
And setting stars, to kindly rest invite;
But, since you take such int'rest in our woe,
And Troy's disastrous end desire to know,
I will restrain my tears, and briefly tell
What in our last and fatal night befell.
"By destiny compell'd, and in despair,
The Greeks grew weary of the tedious war,
And by Minerva's aid a fabric rear'd,
Which like a steed of monstrous height appear'd:
The sides were plank'd with pine; they feign'd it made
For their return, and this the vow they paid.
Thus they pretend, but in the hollow side
Selected numbers of their soldiers hide:
With inward arms the dire machine they load,
And iron bowels stuff the dark abode. 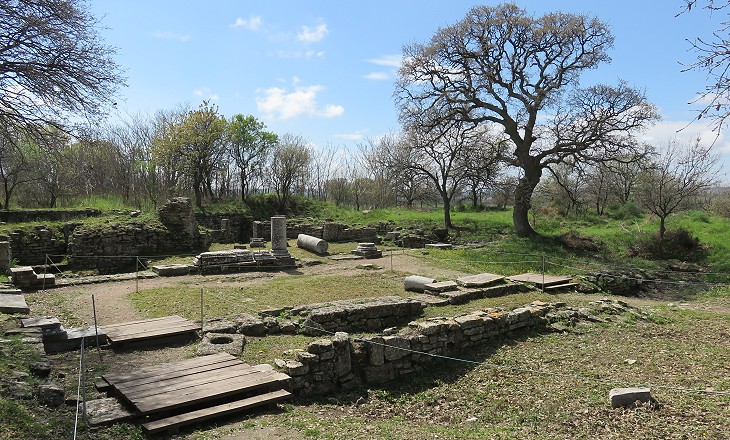 Episodes not narrated by Homer were added by Virgil and their personages were represented in works of art. The image used as background for this page shows the head of Laocoön.

Laocoon, follow'd by a num'rous crowd,
Ran from the fort, and cried, from far, aloud:
'O wretched countrymen! what fury reigns?
What more than madness has possess'd your brains?
Think you the Grecians from your coasts are gone?
And are Ulysses' arts no better known?
This hollow fabric either must inclose,
Within its blind recess, our secret foes;
Or 't is an engine rais'd above the town,
T' o'erlook the walls, and then to batter down.
Somewhat is sure design'd, by fraud or force:
Trust not their presents, nor admit the horse.' (..)
When, dreadful to behold, from sea we spied
Two serpents, rank'd abreast, the seas divide,
And smoothly sweep along the swelling tide.
Their flaming crests above the waves they show;
Their bellies seem to burn the seas below;
Their speckled tails advance to steer their course,
And on the sounding shore the flying billows force.
And now the strand, and now the plain they held;
Their ardent eyes with bloody streaks were fill'd;
Their nimble tongues they brandish'd as they came,
And lick'd their hissing jaws, that sputter'd flame.
We fled amaz'd; their destin'd way they take,
And to Laocoon and his children make;
And first around the tender boys they wind,
Then with their sharpen'd fangs their limbs and bodies grind.
The wretched father, running to their aid
With pious haste, but vain, they next invade;
Twice round his waist their winding volumes roll'd;
And twice about his gasping throat they fold.
The priest thus doubly chok'd, their crests divide,
And tow'ring o'er his head in triumph ride.
With both his hands he labors at the knots;
His holy fillets the blue venom blots;
His roaring fills the flitting air around.
Thus, when an ox receives a glancing wound,
He breaks his bands, the fatal altar flies,
And with loud bellowings breaks the yielding skies.
Their tasks perform'd, the serpents quit their prey. 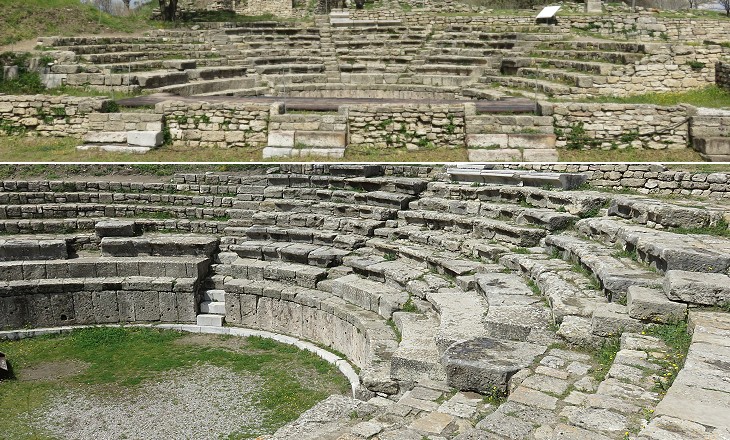 Ilium Novum had all the facilities of a Roman town. Archaeologists believe it had a sizeable theatre in the northern part of the hill, in addition to an odeon, a covered hall for music and poetry performances, at the foot of its southern section. Turkish authorities however are not very keen on uncovering monuments of the Roman period at this site. Turkey has so many imposing monuments of that period at Ephesus, Miletus, Perge, Aspendos, etc., that another Roman theatre would not raise much interest. 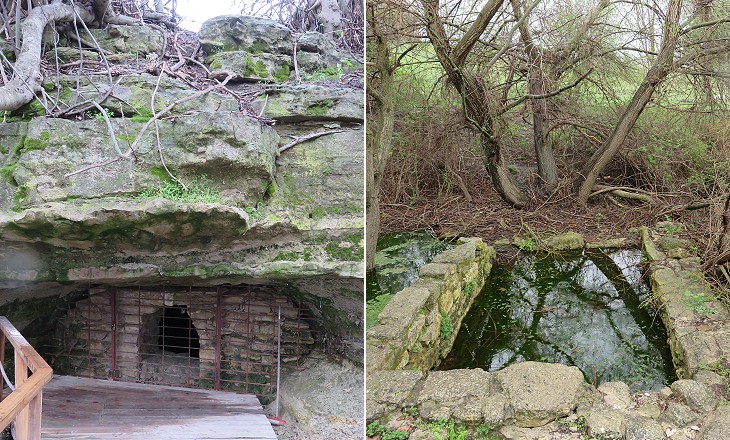 For the time being there is no evidence of an aqueduct supplying New Ilium with water. The Romans however enlarged the access to an underground spring half a mile south of the town which had been used since the time of Troy II. They used terracotta pipes to channel the water into tanks. 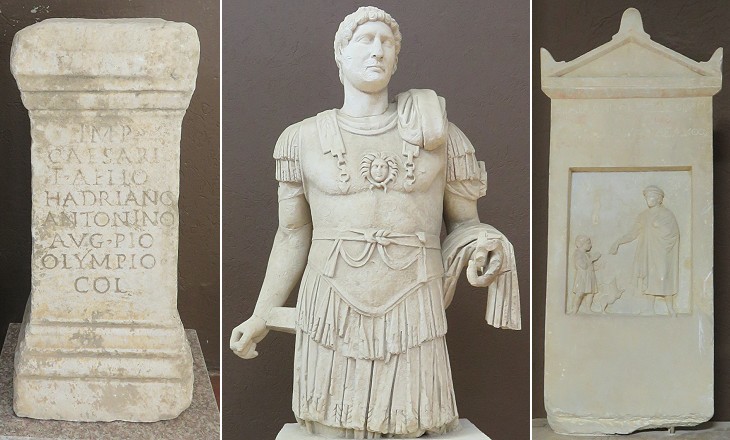 Archaeologists have found many items related to the Roman period of Troy. The most interesting ones have been moved to the Archaeological Museum of Canakkale whereas broken columns and statues, lintels bearing inscriptions, jars, pipes, etc., are kept in open air areas at the archaeological site.
The fortunes of Roman Troy declined during the IVth century AD. The last emperor said to have visited it was Julian who believed that the Empire would have gained by enhancing its ancient origin.
The absence of Byzantine fortifications which usually are found in most ancient towns suggests that Troy was a mere village by the VIth century. 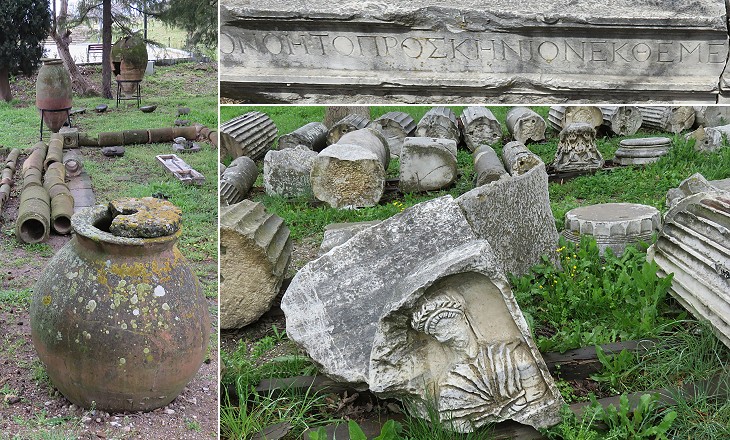 Return to page one or visit the Archaeological Museum of Canakkale.